It Came From the Back Room #13 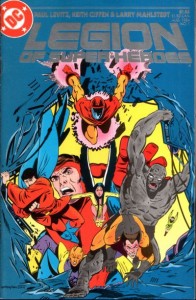 Standard recap: I’m slowly going through AABC’s one-million-plus back-issue room, restocking the boxes on the sales floor and pulling stuff to sell as discount/overstock/special items. I’m going through the alphabet backwards (don’t ask), and at my speed (even with school on holiday break right now), this amounts to a two-year project. This week, I’m on the letter “L.” As it turns out, there are no Marvel “L” regular series, so it’s all indy and DC titles for the time being. Here’s what’s new out on the discount racks: 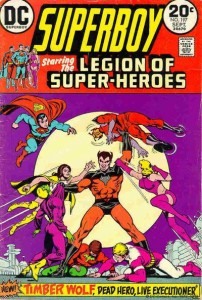 Yes, it’s actually only one title, but since it’s spread over six freaking volumes (not even counting Adventure, Legionnaires or all the mini-series), it’s more than enough to take up the whole parking-lot-facing side of the discount comics rack, and about three boxes on the regular sales floor. There’s no need to talk about the dawn-of-the-Silver-Age, Mort Weisinger-Legion origins here; instead, we’re beginning in early 1973, as Superboy, which had been running Legion back-up stories for a while, changes its title to Superboy and the Legion of Super-Heroes with issue #197. The “Superboy” gets dropped with #259, and the book is Legion of Super-Heroes (henceforth abbreviated as LSH) until #313, when it becomes Tales of the Legion until its cancellation with issue #354. I consider all of this to be LSH Volume #1; the Overstreet Price Guide thinks that it’s Volume 2, having assigned Volume #1 honors to 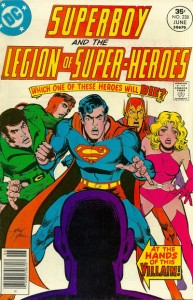 Anyway, the creative team on the early issues, from #197-202, is Cary Bates on scripts and a pre-X-Men Dave Cockrum as artist (Cockrum loved to design both characters and costumes, and since he left LSH so early, many of the designs and concepts he’d been playing with ended up on Marvel’s mutant title instead, resulting in characters like Nightcrawler and Storm). Starting with issue #203, Mike Grell takes over the art chores; he’s similarly interested in costume design, leading to a Legion tradition of frequent costume makeovers for the cast. Bates is replaced as writer by old Legion hand Jim Shooter (he’d started writing LSH stories in the old Adventure days, submitting his first script at 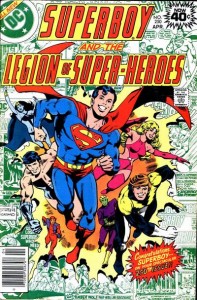 the tender age of 14) from issues #209-224, although Bates hangs around to do occasional fill-in stories during this period, too, with Grell continuing to provide the art. Issue #225 contains the first LSH script by Paul Levitz (the writer most identified with the LSH today, and the author of the current issues), with art provided by James Sherman and Mike Nasser, and he continues as main writer (with a few fill-ins from Gerry Conway) until issue #246. Sherman handles most of the art, with Nasser and the odd fill-in (Walt Simonson in issue #237; Jim Starlin in #239; Howard Chaykin in #240) spelling him until Joe Staton takes over with #243. The Levitz run is probably most fondly remembered for the “Earthwar” sequence in issues #241-245, one of the first true multi-part stories (other than the occasional two-parter) in DC history. Levitz returns briefly to add words to the classic Jim Starlin “Brainy goes nuts” story in issues #250 and 251, and then it’s Gerry 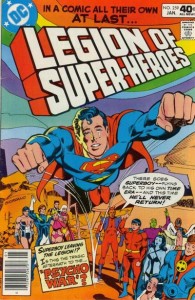 Conway time for a while, which means journeyman scripts and an aim at younger readers, with Joe Staton on the art until #260, and then a series of other artists in a run that’s mostly remembered as “the issues that weren’t by Paul Levitz and Keith Giffen yet.” Probably the most unusual issue during this time period is #268, with a script by J.M. DeMatteis and art by… Steve Ditko (you don’t think of Ditko as a Legion artist, but he also has work in issues #267, 272, 274, 276 and 281, so go figure…). Writer Roy Thomas takes over from Conway with #277, but only lasts until #283, and is followed by Levitz in #284; Keith Giffen first shows up in the next issue, and that sets the stage for the most popular LSH run in its history. 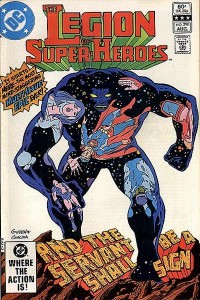 Giffen only draws the back-up stories in #s 285 and 286, but takes over the main art duties with #287, and he and Levitz quickly prove to be one of those classic comics synergies, like Claremont/Byrne and Wolfman/Perez. Their “Great Darkness Saga” in issues #290-294 features a “mystery villain” whose revelation back in 1982 was a true surprise (modern readers will figure out who it is much more quickly, because said villain is a lot more overexposed today than he was back then), and from then on Levitz’s careful plot construction and extensive knowledge of the LSH characters and universe, and Giffen’s clear storytelling and enthusiasm for drawing dozens of heroes and making them all individuals (he’s a lot like George Perez in that) keep the story quality (and sales) so high that DC eventually decides to put them in a second, direct-market LSHbook with better paper and printing (hence its unofficial name: the Baxter series, for the brand name of the heavier paper stock it uses). Volume 1 has new stories until issue #325, and then reprints the Baxter stories until its end with #354. Discount issues are scattered up until issue #295 (get the earlier bargain books while you can, since they’re all over 25 years old), but solid from there up until about issue #225 — and, since they’re all Levitz/Giffen stuff, and all only a buck each, they’re all worth a look.

Volume 2, the Baxter series, starts out with Levitz and Giffen, but Giffen only lasts the

first four issues, being replaced by (mostly) Steve Lightle until issue #17, when Greg LaRoque takes over. It’s a tribute to Levitz’s writing that he’s able to keep the book interesting with these journeyman artists; the high point is probably the post-Crisis on Infinite Earths attempt to explain how the Legion had a “Superboy” when one no longer existed, and issues #37 and 38 are an affectionate tribute, and eulogy, to the Silver-Age versions of both Smallville and Kal-El. Otherwise, things brighten up when Giffen returns with issue #50, and he and Levitz see the title through to its conclusion, with issue #63 in 1989. That’s partly because Levitz has to leave (his increasing editorial responsibilities leave him little time to write any more), and partly because, by now, DC has begun to realize the direct-market fan’s automatic-buying response to first issues. Most of Volume 2, except for the high-value issues like #37 and 38, are available as discount books right now. 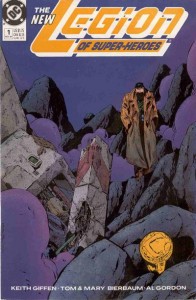 Volume 3 is a Giffen production, on both script and art, and is probably the most sophisticated LSH series — and, I think, the best: it starts with a five-year leap in continuity, to an Earth that’s been battered by various crises and taken over by the alien Dominators, with the LSH long-since disbanded and its members scattered, some as resistance fighters and some just trying to live their lives. No one’s in costumes or uses their hero names, and Giffen trusts on the readers to figure out who’s who and catch up. Not only that, but his heavily-structured style has by now been influenced by the Argentinian artist Jose Munoz, and become much more impressionistic and shadowy; it’s a good match to the considerably darker storyline, and the result is an intelligent, fascinating run. Amazingly, AABC is overstocked on most of these, and they’re bargains at their $1.25 original prices. Giffen, after the first year, gradually relinquishes his duties on the book; the husband-and-wife team of Tom and Mary Bierbaum, who’ve 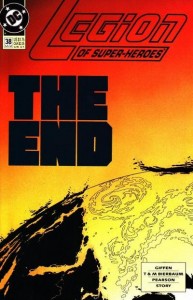 been co-credited as scripters from the beginning, take over more and more of the writing, and some issues are scripted by inker Al Gordon. Issues #15-18 only have a handful of pages with Giffen art, and by issue #27 he’s only providing breakdown (with finishes by a young Jason Pearson). The story continuity climaxes in issue #38, as the Earth is destroyed and its survivors become wanderers, part of a vast space flotilla; that, plus the next issue, are the end of Giffen’s run, too.  After that, it’s the Bierbaums on script and currently-hot artist Stuart Immonen on pencils; the Bierbaums leave with issue #50, and immonen with #61, and then it’s musical creators for a few issues, culminating in Tom Peyer and Tom McGraw on the writing and Lee Moder on the art until issue #101, when Moder is replaced by Jason Armstrong until Scott Kolins comes in with issue #110. The last four issues of the run, #s 122-125, feature a writing team familiar to Marvel cosmic fans: Dan Abnett and Andy Lanning. They set a big chunk of the LSH members adrift in space, leading to the year-long (and hard to find) Legion Lost mini-series… and then the 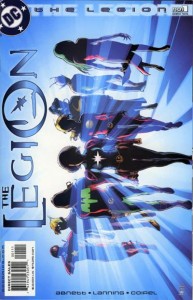 next chapter of Legion history.

That would be Volume 4, simply titled Legion, and it begins with Abnett, Lanning and artist Olivier Coipel, picking up where the Legion Lost and Legion Worlds mini-series left off. Coipel lasts until issue #12 (minus a few fill-in artists), followed by Chris Batista (although Giffen does the art honors on issue #31). Abnett and Lanning last for almost three years, until issue #33, while Gail Simone and Dan Jurgens finsih out the last four issues of the run with #s 35 – 38. At this point, low sales kill the title, and DC takes a few months to figure out what to do next.

The answer is fan-favorite writer Mark Waid, who

decides on a complete reboot of the LSH concept. That leads to LSH Volume 5, with the Legion as idealistic kids from all worlds against a universally-thick set of grownups and authority figures. Waid and (mostly)  artist Barry Kitson do what they can with the concept, but not that many readers are attracted to it. The creators bring in the then-hot Supergirl with issue #16 (part of the company-wide “One Year Later” promotion after the end of the 52 mini-series), which works for a while, but by issue #30 both Waid and Kitson are gone, replaced by Tony Bedard and Dennis Calero. The next attempt to generate new interest in the title involves calling in one of the series’ original writers: Jim Shooter, who takes over scripting chores with issue #37, with art by Francis Manapul. Shooter turns in an interesting, brainy run, but the series is snakebit: all of the issues lead up to an overall climax in issue #50, but by then the title has been cancelled and Shooter has left (presumably: writing credits on that 50th issue are to “Justin Thyme,” obviously a pseudonym, but how much of that issue is actually Shooter, and how much 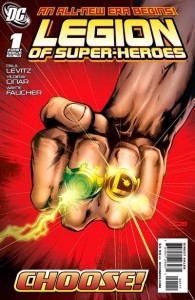 other hands, is impossible to tell).

Volume #5 ends in March, 2009; DC waits almost a year and a half, until June 2010, to start the current volume, #6, and they bring their other big Legion gun in to do it: Paul Levitz, recently retired as publisher of the company and revisiting the scene of past triumphs. Will artist Yildiray Cinar prove as synergistic as Keith Giffen? Will Legion fans, whiplashed by reboots and renumbers and years of continuity tweaks, manage to care any more? Will new readers be enough to keep the book afloat? The first issue sold about 44,500 copies, but November’s issue, #7, was down to about 26,500 and hasn’t shown much sign of leveling out yet; that puts the franchise just below Teen Titans and just above Batgirl — not stellar, but not in danger of cancellation… yet. Stay tuned….