In a week without a lot of must-buy items, let’s start with an old reliable: as I’ve said here before, Jonah Hex stands or falls on its artists, and Bernet is the best among them; like a lot of European artists, his pleasure at getting to draw the Old West and its quirky, craggy characters and scenery is infectious, and the more terrible their actions (and the retribution that Hex rains down upon them), the more inspired his art becomes. Palmiotti and Gray give him a lot to work with this issue, both in the rocky landscapes and in the dark, terrible deeds they conceal, and the result, especially since it’s a self-contained, done-in-one-issue story, makes this the best book of the week. 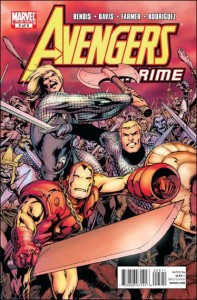 This tale of the three core Avengers — Thor, Iron Man and the currently non-Captain America Steve Rogers — and their adventures as all three are separated and lost in a misty Asgardian never-never land, and have to reunite and save the universe from Hela and other Norse bad guys, is well-told and well-drawn, but suffers from bloat: as a 64-page annual or graphic novel, it would have been perfect, but extending it over a five-issue 120-page-plus mini-series makes it drag, despite Bendis’s talents for relaxed conversation and decompressed storytelling.  Davis and Farmer are a rock-solid art team, and have plenty of cool stuff to do here, so readers who’ve picked up the first four issues will find this to be a satisfying conclusion. If you haven’t picked up the rest, though, just get this one — you’ll have the big battle scenes, be able to figure out the earlier parts of the plot, and still get the ending, without having spent $16 on those earlier issues. 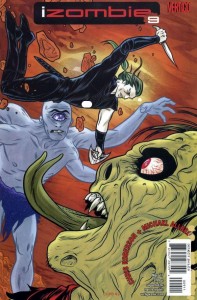 This book has settled into a comfortable, quality niche: its hip, twenty-something ghosts, ghouls, vampires and monster chasers are all sympathetic, appealing and very good-looking (why this hasn’t been optioned as a combination Supernatural and One Tree Hill-type TV series yet is beyond me). Allred’s art continues to be the main attraction, and it’s a pleasure to watch him work: in his capable hands, even a scene at a miniature golf course ends up looking simultaneously magical, eerie and charmingly psychedelic.

Billy the Kid’s Old Timey Oddities and the Ghastly Fiend 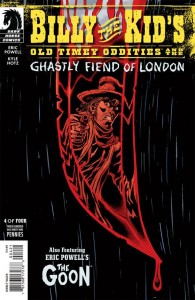 Powell and Hotz make a good team, since Hotz’s sensibilities for horror, and his shadowy, Wrightsonesque inking, are such a close match to Powell’s own work; this mini-series, with Billy The Kid and a troupe of circus freaks in London encountering Jack the Ripper and other Victorian characters, has just the right amount of gore, gonzo plot twists and sly asides to keep it interesting — and the back-up story, drawn by Powell and starring his Goon character (who, at the end of his story, makes an… interesting case for why you shouldn’t read super-hero comics), makes it even better. 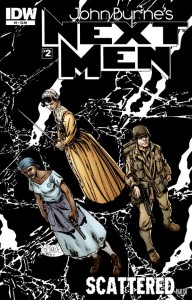 After all the “It was a dream! No, Wait… this was the dream!” whipsawing of the first issue, this one settles down into following its three time-lost protagonists: one during the Civil War, one during Shakespearean times (with the Earl of Oxford, who’s suspected by stupid people of writing the Bard’s plays, featured prominently), and one during World War II. It’s fun watching Byrne draw the various costumes and equipment, and try to reproduce the dialogue, of the 17th, 19th and 20th centuries, and while not that much happens yet (as a second issue, this is mostly about getting dominoes in a row, so that they’ll fall properly in later issues), there are enough interesting little asides, and hints about what’s to come, to keep the reader coming back.

Stuff I didn’t buy, but wanted to talk about anyway: 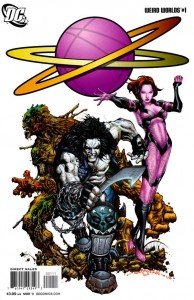 Cosmic adventures from DC, with three ten-page serials in each issue of this mini-series; the one familiar face (and the one featured most prominently on the cover) is Lobo. The story here is fairly standard, involving our Czarnian anti-hero, an alien bar, and a bounty he’s trying to catch (Lobo stories not by Keith Giffen tend to be like Howard the Duck stories not by Steve Gerber: they never get the tone or the character’s unique humor quite right), but the Ordway art holds its own, and as a lead story it’s workable enough. The Lopresti offering is a Swamp Thing/Man Thing take; as with Lobo, the art is better than the script, even though in this case it’s the same creator doing both. Only the third story strikes the proper balance: Maguire’s good at drawing both his space scenes and his mysterious title character, and her dialogue does a good job of making her seem appealing, menacing and a trifle bubble-headed, all at once. 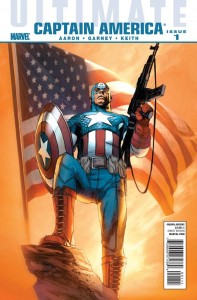 Get ready for lots of Cap product over the next few months: as with Thor, he’s got a movie coming, so Marvel’s pumping out the comics mini-series in preparation for the inevitable trade collections in hopes of separating movie fans from any money they’ll have left over after the popcorn and soda prices have stripped their wallets. This book involves Ultimate Cap on an undercover mission in North Korea (if he’s undercover, why is he in costume? Aaron is smart enough to bring up that question, but not smart enough to come up with a satisfying answer to it — the real answer, of course, is that readers who shell out good money for a Cap comic want to see him in costume, damn it), and his encounter with a better-engineered version of himself, who turns out to be… well, another Ultimate version of a Marvel character, let’s say, so we don’t spoil the minor reveal. It’s all solid enough, and Garney’s got enough history with the regular Marvel version of Cap to provide decent art, but it just doesn’t stand out from the crowd very much, and for $4  fans might want a little more than that. Still, in a light week like this one, it might be worth a look….

With 40 years of experience in comic reading, collecting and reviewing, English Professor Phil Mateer has an encyclopedic mind for comics. Feel free to ask Phil about storylines, characters, artists or for that matter, any comic book trivia. He will post your questions and answers on the AABC blog. His knowledge is unparalleled! He is also our warehouse manager, so if you are looking for that hard to find comic book, ask Phil!
View all posts by Phil →
This entry was posted in New Comics, Reviews and tagged Aaron Lopresti, Alan Davis, Avengers, Billy the Kid, Brian Michael Bendis, Captain America, Eric Powell, Iron Man, iZombie, Jason Aaron, Jerry Ordway, John Byrne, Jonah Hex, Jordi Bernet, Kevin Maguire, Kyle Hotz, Lobo, Michael Allred, Next Men, Ron Garney, Thor, Weird Worlds. Bookmark the permalink.