The Latest and (Mostly) Greatest #94

All right folks. We’re back with a bunch of new comics and a big ol’ week of books. Let’s do this. 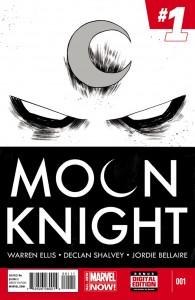 So you’d think I would love this book if only because Ellis is writing it, but it goes way beyond that. Ellis take on Moon Knight is as quality as you’d expect it to be, but it’s Shalvey’s art and Jordie Bellaire’s coloring (or lack thereof) that make this book easily stand out as the best of the week. I think they chose to not even color in any part of Moon Knight’s suit. Like, not choose to make it white, but actually leave it the color of the comic page. It gives this weird layer of depth and style that you won’t see in any other book. This first issue sets the tone for the rest of these series. It’s a fun book with fantastic art, and it’s easily the best of the week. 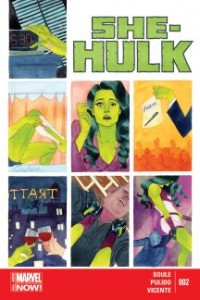 If Marvel’s going to make their comic books this good, I’m going to run out of positive things to say. After a first issue that set up the whole series (kinda sorta exactly like Moon Knight this week), Jennifer Walters settles down in her New York law firm with nothing to do. She hires a receptionist and goes out for a night on the town with Hellcat. This is another book that has a quality story enhanced by absolutely fantastic art. Pulido makes you read every page by mixing up the layouts to inflate the storytelling to a whole new level. These first two issues have used the “Hawkeye” method of taking a normal person and making them into a hero for the common folk. So far so good.

Huh? So the dude under the hood was exactly who you thought he was, but with a slight twist, because that’s just what Johns does. It’s a fine twist, but the overall story is just very, very blah. Batman, Lex Luthor and their crew of villains finally take on the Crime Syndicate, but things start getting screwy in all different ways. Nightwing gets the brunt of the pain in this issue, and it’s entirely possible, though highly doubtful, that he’s dead. The story has finally hit it’s stride, but I think I’m just too jaded by event fatigue to really care. I want to see where it’s going next, but I don’t want to invest in it just to have it roll into another event. It’s totally fine, but just not worth it. 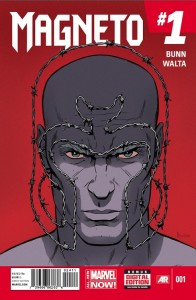 Another new Marvel book, this one not as good as the others, but still pretty solid. I missed that Magneto left the X-Men, but here he is now. Apparently he’s turned into a cold-blooded assassin taking down mutant haters everywhere. But it’s not that simple. It looks like Bunn plans to take a slow burn with this story, mixing mutant murder with robots built into people, all with a side of a hate-filled Master of Magnetism. The art style looks a bit like Giuseppe Camuncoli and actually a little like Richard Corben, so it fits the tone of the book quite well. If you like X-Men, then it’s worth checking this book out. If you don’t, then it still may be worth a peek if only because it’s so different. 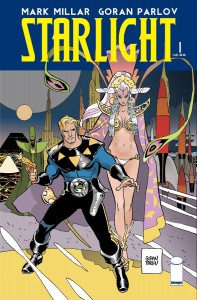 As a master of hyperbole, Millar described this as “Buzz Lightyear meets Unforgiven,” but to me it just reads like “Old Man John Carter of Mars” or “Old Man Adam Strange”. That’s not to say it’s bad comic, it’s pretty aggressively fine. Duke, our resident old man, at one point traveled to space and saved a princess, but he’s always been in love with his wife. After he gets old and his wife passes, he has to find something to do with himself. That’s when a mysterious ship arrives to possibly take him away. Let’s start with the art, which is beautiful. Parlov stretches his style to make wonderful space buildings and pretty ideas. However the story is explained on the back of the book. Literally everything that happens in this issue is spoiled in two sentences on the back. It’s a total waste of a slow burn, and while I want the next issue, I may just read the back of it first to see if it covers the whole plot again. I liked it, but that really struck me the wrong way. 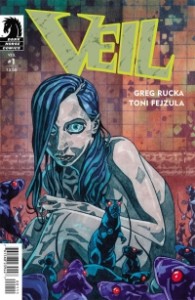 Rucka’s known for his stories about strong women, and they don’t get much stronger than the main character of this new book. Though she walks out of the subway, after being covered in rats, completely nude, she immediately proves to be more than what she seems. After getting heckled out in the street, she gets help from a random guy. He takes her back to his apartment, but his ‘friends’ don’t appreciate that. Soon enough they pay the price for messing with the new girl. It’s a fun first issue set-up, with lots of potential for more. Fejzula draws it extra creepy (just look at that cover!) and it works perfectly for the tone of the book. Great, interesting stuff.

Juice Squeezers #3 Writer/Artist: David Lapham: Juice Squeezers is really awesome, but this is my chance to remind you to buy Stray Bullets when it comes out next week. It’s also by Lapham, so just do it.

Jupiter’s Legacy #4 Writer: Mark Millar Artist: Frank Quitely: After 3 issues were an apparent set-up, this story makes a time jump. It’s very average, but the Quitely art is as pretty as ever.

Rogue Trooper #1 Writer: Brian Ruckley Artist: Alberto Ponticelli: This slight spin-off from Judge Dredd fits right in the mold with that IDW has published lately. It’s a well-made, enjoyable read that works if you’re looking for something new. 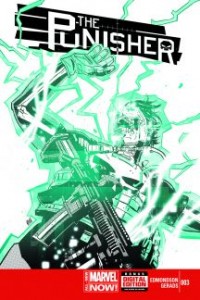 Punisher #3 Writer: Nathan Edmondson Artist: Mitch Gerads: After a weird last issue, the payoff of adding Electro works out. It’s a great book, and getting better.

Wolverine & the X-Men #1 Writer: Jason Latour Artist: Mahmud Asrar: A ‘new’ series after a previously solid run, and it starts with a lot of teen angst. It’s aggressively meh, and the only new Marvel title to miss the mark this week.

The Saviors #3 Writer: James Robinson Artist: J. Bone: This book gets really plot heavy, but that’s not bad. Everything is in place now and things are exploding on every page. It’s just a great, great series.

And that’s the week! I have nothing more to say. The end.