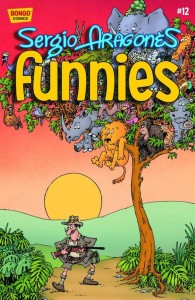 Aragones says in the introduction that this is the last issue of this title from Bongo, but that it will continue at another publisher soon. Good, because we can’t afford to lose his meticulous, well-composed, funny pen — look at that cover (click on it for a larger version)! As always, the best thing about having his own comic is that he gets to stretch out from the one-panel and one-page Mad magazine gags he’s famous for; here, there’s an eight-page story of a loser trying to dress up and act like a superhero, and a ten-page autobiographical tale about his encounters with the famed Japanese actor Toshiro Mifune, along with a few gags and a couple of intricate puzzle pages. The “true” stories are always the best, and you can see in this one why Aragones likes Mifune: they’re both cosmopolitan nice guys, extremely good at their respective tasks (for fans of Groo, there’s an added bonus in seeing how Aragones’s dog looks just like Rufferto, and his wife just like an older version of the beautiful woman warrior Chakaal). 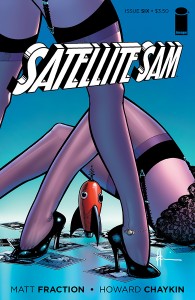 This title’s taken a while to get going, but now that the cast of characters and inter-relationships has been established, the action is warming up, on a number of fronts — this issue has a long scene showing the perils of live TV in the 1950s that feels very true-to-life, and shows just how much research Fraction and Chaykin have put into the words and visuals; in the meantime, Mike, the main character, continues to grow into his job, and bad things happen to a number of other characters. Chaykin’s art makes this a pleasure to read, and Fraction’s good at keeping all the plates spinning, and connecting all the dots to form a solid plot; this is a comic I always look forward to, and it’s always near the top of the “read” pile. 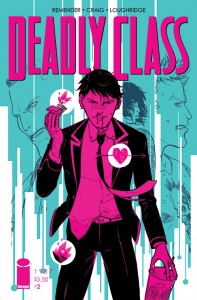 The first issue of this was mostly set-up, but it got by on Craig’s cool-looking action pages and Remender’s passionate editorial, which hinted at a game plan worth sticking around for.  This second issue gets down to business with the real plot: it’s the late ’80s in San Francisco, and the title character, a kid who’s done a number of bad things and is on the run from the cops, has been recruited into an underground school for assassins, whose students are the sons and daughters of every crime cartel boss, terrorist group leader or dictator on the planet. The diversity in the student body gives Craig lots of opportunity to show off his ability to draw all kinds of people, and make them all recognizably real and stylish as hell, and the mashup of genres (the new-kid-in-high-school movie, the outsider’s-revenge-on-society movie, the cold-blooded-assassin movie, and even some Harry Potterish school-of-forbidden-knowledge-with-weird-teachers bits) makes this exciting, nasty fun. 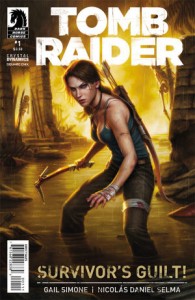 This features a Lara Croft based on the newer video game, much younger and less sure of herself, but still knee-deep in adventure, and battling supernatural forces beyond her control. Simone’s a good writer for this kind of thing, and does a smooth job of setting up her character and foreshadowing the action to come (one disadvantage is that this looks like it’ll be a five- or six-part story at least, so what’s here is more or less an introduction, not a full story). Selma’s art is OK: he has a solid line and a way of communicating emotion well, although his sense of space and perspective on the page isn’t always clear. Even so, there’s enough here that, for fans of the long-running Image comic with this character, this should be a welcome return. 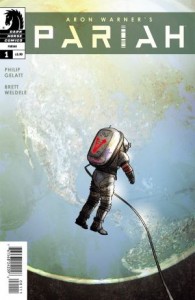 This isn’t really a new comic — it’s the second volume of a series, about super-intelligent outcast kids that the government would like to get rid of. Here, they’re picking up from the cliffhanger end of the first volume: trapped on an aging, abandoned space station that’s booby-trapped to kill them (mind you, the comic itself barely covers any of this, and just picks up the action in the middle — not the most new-reader-friendly package). Warner, who’s produced the various Shrek movies, in addition to Tank Girl and Ghost in the Machine, certainly knows his way around fringe-comic pop culture, and is kind of the showrunner here — there’s a lot of hard-science sf in the plot (this reminded me a lot of the kind of mid-century space-science-fiction story that somebody like John Campbell would publish); Gelartt’s dialogue works pretty well, and Weldele has a very Ben Templesmith-ish pencils-plus-watercolors style that works well with the material.  Even though I’d never read the first volume of the series, and had no idea what was going on, this sucked me in and kept me fascinated. 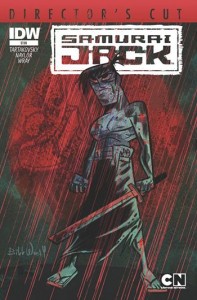 This book first came out in 2002, published by DC, and is an adaptation of the Samurai Jack pilot episode. The original was done on regular paper, is almost impossible to find, and will cost you at least $20.00, so having a director’s cut (with some sketches and commentary from Wray) on much better paper, with much better coloring, is worth the $7.99 price. Wray, collaborating with Lynn Naylor and Mike Manley, just draws the hell out of this comic, nailing the cartoony fever-dream blend of samurai history, demons, and surreal far-future earth (don’t even get me started on things like the enslaved talking-dog archeologists, one of whom looks exactly like Huckleberry Hound…) that makes up the exiled time-traveling title character’s world; whether you’re a fan of the cartoon series or not, you have to pick up this comic just because it’s such a cool, candy-colored buried treasure. 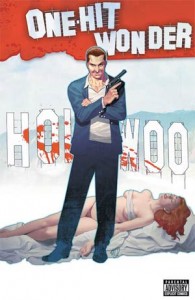 A new Image series about a bored former child actor who becomes a hit man. Worth a look for the Olivetti art, although the plot goes all over the place, and credibility isn’t so much strained as pureed, put through a blender, mixed with rocket fuel and blown into orbit. Kind of fun otherwise, but don’t think too much about it, or your head will start to hurt. 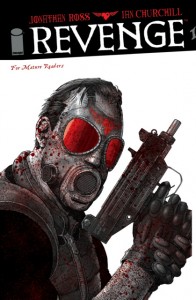 Sort of like One-Hit Wonder, in that the art’s OK, but the story’s not, let’s say, particularly carefully constructed: it’s a B-movie/grindhouse standard about a mobster who gets betrayed by a woman and ends up with his face ripped off; apparently, by next issue he will become… Face-Ripped-Off Guy (er… “The Revenger,” is what he vows). Considering all the sex and violence, you’d think this would be more fun and energetic, but maybe I’m not the demographic for it; it just felt kind of tired and depressing. 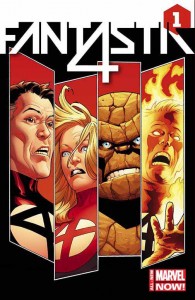 I don’t mind Kirk’s art — he’s got an easy, professional gloss that reminds me of Mark Bagley, the last FF main penciller — but here’s my problem with this first issue: the very first three pages are a near-future Sue Storm, writing to her kids about how the FF are completely screwed up, Ben’s in jail, Reed’s stupid, etc., etc., and now we’re going to get six or twelve issues or whatever showing us how they got to this point.  Who wants to read this? The best FF writers have typically started their runs with a series of clever, fun one-shot stories, to establish their credentials, and seldom ventured above two-or three-part ones: Lee/Kirby, of course, but also John Byrne, Mark Waid, and the underappreciated Dwayne McDuffie; even Jonathan Hickman knew how to provide self-contained, one-issue stories that later turned out to be part of a larger puzzle. Slogging through six or twelve months (and $25 to $50) of downward spiral waiting for the heroic turnaround just doesn’t seem like much of a good time; I’m afraid first-time readers of this issue wouldn’t find any reason to come back. 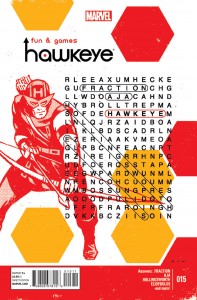 Here’s a book (along with the Mark Waid Daredevil) that knew how to start out right; no one read its first few enthusiastic, experimental issues without wanting to come back. It’s been suffering from an erratic schedule lately, though (issue #16, with the Kate character in California, came out a couple of weeks before this one, #15), and it’s in the middle of, yes, a depressing downward spiral for the character, but those earlier issues allowed it a lot of slack here, and I think when read as one chapter in a complete story this will do just fine. Aja, as always, is a wonder, with his quick, flickering small panels and his expressive faces and figures, and both colorist Matt Hollingsworth and letterer Chris Eliopoulos make this a graceful, good-looking comic; unlike the FF, there’s a real sense of something at stake here, and the climactic last-panel splash is guaranteed to bring everyone back for more. 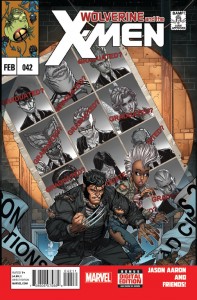 Wolverine and the X-Men #42 — Writer: Jason Aaron; Art: A bunch of people

Last issue of what turned out to be a surprisingly sweet-natured run, with Aaron suppressing some of his B-movie cynicism enough to show a real affection for the characters. Lots of artists, as we time-jump ahead to a white-haired, cane-using Logan about to close the school for good, while we also observe a graduation day in the present; Chris Bachalo is the name that’ll stand out most, although he only does the last two pages, but others include Nick Bradshaw, Pepe Larraz, Ramon Perez, Shawn Crystal, Steve Sanders, Nuno Alves and Tim Townshend.  This will continue with the same characters and a new creative team in a few weeks, but before then let’s pause and give Aaron and crew thanks for three years of entertaining work. 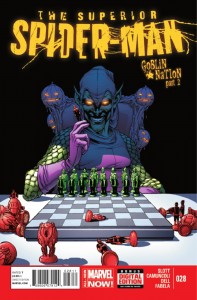 The “real” Peter Parker is coming back in a few months, so get in on the last few issues of this two-year examination of what would happen if a bad guy beat a good guy, and then tried to be that good guy. I keep using the words “surprisingly entertaining” for this story, and I’ve been impressed with the way the creative team has built it all around Otto Octavius’s character: especially his sincere desire to do the right thing, despite the Shakespearean tragic flaws that block him, and have sown the seeds of his own destruction. 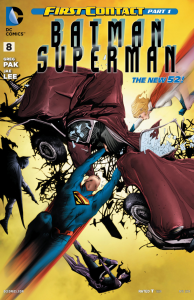 These are parts one and two of a four-part crossover for these two titles, wherein the Huntress (daughter of the now-dead Earth-2 Batman) and Power Girl (younger cousin of the ditto-now-dead Earth-2 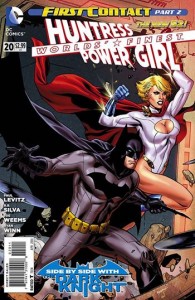 Superman), who’ve been stranded on the New-52 Earth for a while, finally meet “our” versions of their father/father figure. Better than I expected; there’s a shadowy-bad-guy nanovirus thing affecting the Kryptonians, leaving it to the Bat-people to figure things out, but they don’t get along that well because the Huntress thinks “our” Batman is such a dick: younger, more arrogant and less trusting, since he’s never married and had a daughter to mellow him like the Earth-2 version did. Batman/Superman has the better art, but Worlds’ Finest the better writing; the two creative teams blend together well to tell the overall story.

With 40 years of experience in comic reading, collecting and reviewing, English Professor Phil Mateer has an encyclopedic mind for comics. Feel free to ask Phil about storylines, characters, artists or for that matter, any comic book trivia. He will post your questions and answers on the AABC blog. His knowledge is unparalleled! He is also our warehouse manager, so if you are looking for that hard to find comic book, ask Phil!
View all posts by Phil →
This entry was posted in New Comics, News and Events, Reviews and tagged Batman/Superman, Deadly Class, Fantastic Four, Hawkeye, One-Hit Wonder, Pariah, Samurai Jack, Satellite Sam, Sergio Aragones, Superior Spider-Man, Tomb Raider, Wolverine. Bookmark the permalink.