The Latest and (Mostly) Greatest #87 by Dan!

Another week… another set of reviews. Let’s do this! 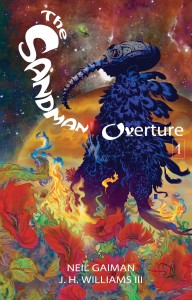 Let’s get this awful fact out of the way: I’m not a huge fan of Sandman. I enjoyed the first couple stories, but got tired of the constantly changing art style and the continuing idea of stories about stories’ that I feel like Gaiman always does. Now that I’ve lost half the audience, I will say that I enjoyed all the characters that Gaiman created in the universe. I thought the ideas were clever and smart, but I didn’t enjoy the execution. Now this story comes along with a return of several of those characters, and oddly enough, I really enjoyed it. I believe that giving Gaiman a specific artist like Williams who will change styles, but keep a consistency makes this book even better. You know the critics are going to revere this book, and they probably should, but as a person that didn’t really like Sandman, I enjoyed this first issue immensely. 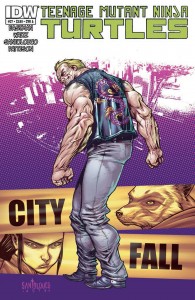 That’s right, I’m going to transition out of saying “I didn’t enjoy Sandman and say that I love the current iteration of TMNT”. Kevin Eastman and Tom Waltz have created a universe adapting the 90s characters to modern times and it’s working on all fronts. The main story “City Fall,” has dealt with Shredder taking over and all kinds of gangs fighting all over the city. The side story has had pieces of Shredder’s gang and how they’ve reacted to the situation. It’s been a really well put together story that is contained in two books, and I love everything about it. 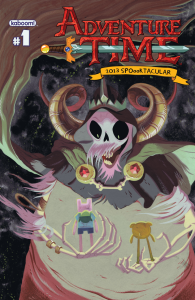 Boom Studios knows they have a money train in Adventure Time comics, and these seasonal books have been one of the highlights of quality aside from the main book. There’s a lot of good stuff in here including the Ice King showing up uninvited to a party; Marcelline trying out being nice as a new costume and an evil pumpkin patch. But the real ridiculous high point comes with Frazer Irving drawing some Adventure time characters. Imagine if all those characters looked real and were creepy as hell, and that’s what you get with that story. Everyone’s favorite janitor Starchy loses his mustache and he has to run around the land of Ooo to find it. That right there is the kind of sentence I get to write. What a world. Read this book…it’s fun.

This is just a weird mini-series. We’re at the point where the heroes are rallying to take down everyone and beat up everything, but it’s seeming too weird and obvious. I feel like there’s going to be a big twist. Professor Phil described Hickman as a frustrated engineer, and I have to agree. Hickman’s obsessiveness is making this book work even better. His attention to detail puts things together in ways that other people wouldn’t normally do. His stories provide twists and turns that are unexpected and fun. It’s good stuff, but I’m still holding off complete judgment until everything is said and done. 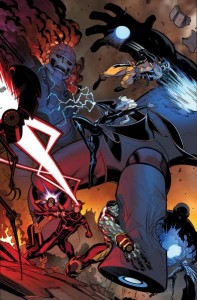 X-men Battle of the Atom #2 Writer: Jason Aaron Artist: A lot of people.

This… uh… this turned out to be pretty awful overall. When you’re at the point where the cover has completely different credits than the book itself, you’ve screwed it up. I was afraid that the Bendis-wordiness would bring this title down, but it turned out that the awful plot would really just finish it all off. In this issue… everyone dies! Kinda. Except not really, nothing really happens. The people from the future go home, the people from the past STAY HERE (What’s the point?) and they all kinda switch sides. Kinda. There’s also four epilogues of two pages apiece done by a couple different teams, but who cares? It’s stupid and awful, and I just don’t understand why this mini-event needed to happen. Just not even remotely worth it. 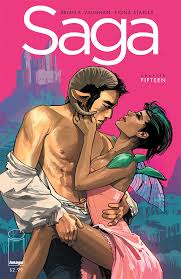 Guardians of the Galaxy #8 Writer: Brian Michael Bendis Artist: Francesco Francavilla: Francavilla drawing Angela is weeeeeeird. The story is fine, moving along at an expected slow Bendis pace, but it’s very very pretty to look at. 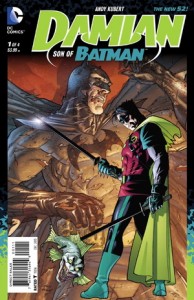 Damian: Son of Batman #1 Writer/Artist: Andy Kubert: Yeah, so this is a book. Years after his death, Damian is back as Robin. Batman dies and… he goes on a killing spree! It’s all as weird as you think it’d be. If you like Kubert it’s fine, otherwise pass.

The Raven and the Red Death, Adaptation by Richard Corben: If you’re looking for crazy interpretations of Poe works by an amazing artist, then this is the book for you. 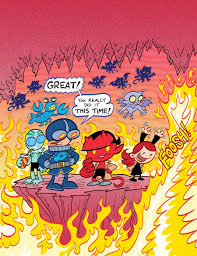 Green Lantern Annual #2 Writer: Robert Venditti Artist: Sean Chen: What a weird ending to the Relic storyline. And apparently Carol is now in love with Kyle? I just don’t know how to feel about all this. Eh.

Powerpuff Girls #2 Writer/Artist: Troy Little: What a fantastic interpretation of a 90s cartoon. Much like Samurai Jack last week, this is a fantastic fun book.

And that’s the week! I’ll see you next time folks!