Kinda boring Marvel/DC titles this week — and does anyone following DC need me to tell them Forever Evil #3 came out? Everyone who cares knows, right? Instead, let’s look at some of the indy books you may not know about, including a quintet of first issues…. 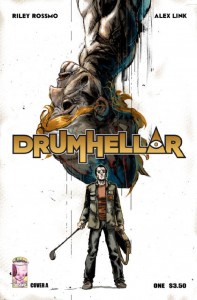 Rossmo was last seen drawing Dia De Los Muertos, an anthology mini-series where he illustrated horror scripts from a number of different writers, about this time last year; that established him as a careful craftsman with a knack for appealing-looking, realistic characters caught in fantastic circumstances. Here, Drum Hellar is a “psychedelic detective” (he takes peyote to solve cases, and has a not-quite-imaginary animated assistant named Harold) who enlists his skeptical ex-girlfriend to help him. The combination of hard-boiled detective and tongue-in-cheek fantasy is fun, and, although I’m very hard to impress with wordplay, the complicated, throwaway Buddhist-mantra pun on the next-to-last page made me laugh out loud. This is a book to watch.

Legends of Red Sonya #1 (of 4) — Writers: Gail Simone, Nancy A. Collins and Devin 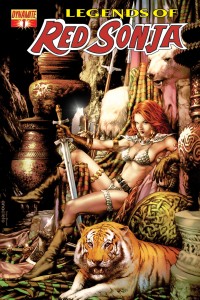 Those three writers are probably the most high-profile women working in mainstream comics right now, so their stories of a super-competent female battling to survive in a world of slack-jawed, ultra-macho barbarians have a certain… metaphoric resonance. Simone and Jadson offer the sequences that frame the anthology, as a posse of bad guys after our heroine tell stories about her; Collins and Salonga offer a typical raiding-a-temple yarn involving a jeweled idol, while Grayson and McNeil (the only woman of the three artists, and best known for her long-running Finder) spin a nice-looking and slightly-offbeat tale of Sonya at sea. The result is a decent sword-and-sorcery book, and a chance to see a group of skilled creators show their stuff. 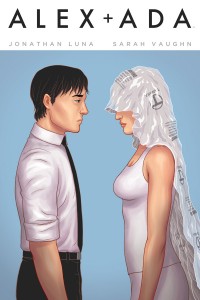 Luna, the artist here, previously worked with his brother Joshua on the series Ultra, Girls and The Sword; he’s got a very clean, deceptively-simple line and a smooth, cinematic style. Like those earlier books, this has an easy-to-relate-to protagonist in a classic science-fiction plot — it’s the near future, and everything’s just a little more cyber-connected than today, but people are nervous because a year ago an artificial-intelligence program became sentient and went all Terminator/Skynet, killing a couple of dozen people before it was shut down. Alex, our hero, has a Google-glasses-like chip implanted in his own head, but otherwise leads a boring corporate existence, and finds it hard to interact with people; his rich grandma, who wants to see him break out of his shell, buys him an android girlfriend (the Ada of the title) who shows up in a crate in his apartment. Will she help Alex become more human, or eventually try to kill him and take over the world? Dunno yet, but the premise is intriguing; if Luna’s had a weakness in the past, it’s that his characters are just a little too much by-the-numbers and bloodless, so it will be interesting to see how this plot, and teaming up with Vaughn, an artist and writer herself, influence the story. 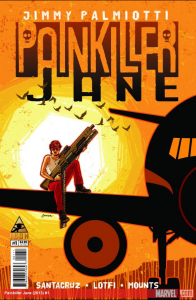 This is a relaunch of Palmiotti’s ex-undercover, smart-mouthed cop with Wolverine-like healing powers; she’s tasked with trying to find a spoiled Saudi princess who’s an assassination target and keeping her alive. Lots of gritty urban drama leavened with typical comic-book-sassy dialogue and action, and Lotfi’s decent enough at making the movement on the page clear and drawing nice-looking people doing heroic and villainous things. This is the most comic-booky of the new issues this week, but that’s an observation, not a criticism: it delivers the expected entertainment smoothly and well. 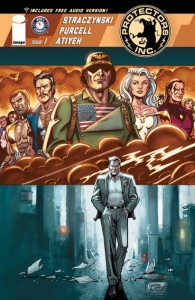 Two for Straczynski’s imprint at Image comics; with Sidekick and, soon, revivals of Dream Police and Book of Lost Souls, he’s got his own little studio up and running. Protectors, Inc. is set in a superhero world where the first one was a Captain America type in WW II; in the 50 years since, others have popped up, but ten years ago the original vanished. Most of this first issue is introducing seemingly-regular inhabitants of this version of the US, and explaining backstory; it’s done well enough, in the way that a Mark Waid or Kurt 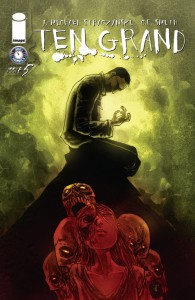 Busiek would (although Busiek, especially, is better at it than Straczynski), and Purcell offers journeyman superhero art that does what it’s supposed to, carries the story OK and doesn’t otherwise call attention to itself. Ten Grand is a dead-center Straczynski plot: the outsider who helps normal people with unusual problems, walking the occult world but himself a pawn of cosmic higher powers; if you read his first attempt at this, Midnight Nation, or Book of Lost Souls, then you have the idea. Like all established creators, JMS has a pocketful of tropes and themes he shuffles around, and whether you like this depends on your tolerance for them. Earlier issues were worth buying because of Ben Templesmith’s quirky, cool-looking art, but he’s left, and although Smith tries to blend his own and Templesmith’s styles into a coherent substitute here, it’s, like Protectors, Inc., just OK now; fans will like it, but new readers may not. 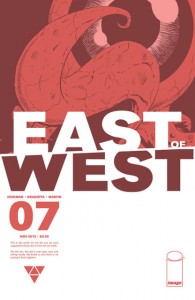 Like Straczynski, Hickman benefits from good artists, and that makes East of West the star here — Dragotta nails the combination of Western and Eastern milieus, and when, every issue, Hickman gives him a couple of decent splashes or set pieces to draw, he delivers handsomely. Hickman’s subtle, leisurely plotting style means that the reader’s never quite sure what’s going on (or if it will ever end), but 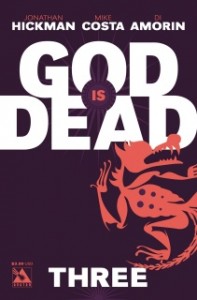 the individual scenes are always interesting, and this book is, visually, a joy to look at and savor. God is Dead benefits from being a mini-series (and having a co-plotter/writer, presumably); it’s an apocalyptic tale of the various gods/pantheons reappearing and reclaiming the Earth, and mankind fighting back scrappily; it reminds me of the kind of science fiction story Robert A. Heinlein might have knocked off on a decent day. Amorim isn’t quite to Dragotta’s level, but he’s well above average, and the script is generous about giving him cool god–battle stuff to draw (there’s a full-page double-headed fire-breathing dragon splash that’s almost worth the book’s $3.99 by itself). 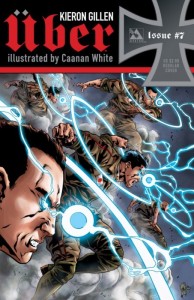 Gillen’s what-if about the Nazis developing super-soldiers in the last days of WW II, and the arms race with the Allies that follows, continues to be grim fun; the detailed research into real-world events, and the ability of this, as an Avatar book, to be able to deliver the head-exploding gore that’s required combine to make it a compelling story. This issue finishes a two-part look at the Pacific theater (the Japanese have their own powered-up troops) and introduces someone who may become the book’s major character (although war books, like zombie books, have such a low survival rate that it’s hard to be sure…). 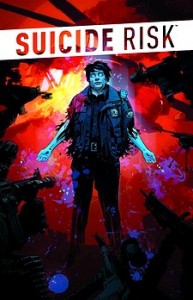 This is another super-powered world book, about a cop who gets a treatment that develops powers of his own, but then finds out that he was actually a powered being before, and has forgotten (or is a reborn avatar of an older super-powered guy, or something like that… the whole story hasn’t been revealed yet). It’s got just-average art, but also has the typical Carey intricate plotting, smart science and decent character and dialogue, so it’s readable enough. 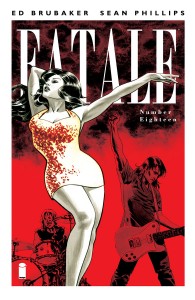 The longest-running book on this list, Fatale continues to offer dependably-entertaining hard-boiled noir/occult stories of its ageless, inadvertently-deadly main character, and Brubaker and Phillips make them smart, sexy, suspenseful and fun. Keep it up for at least another 18, guys. 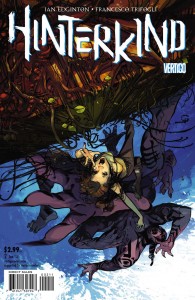 Edginton’s story here involves a post-apocalyptic world where mankind has been reduced to a few struggling pockets of survivors and the landscape has reverted back to wilderness; this has also brought back ogres, trolls and other creatures of myth who, once chased off by mankind’s numbers and technological power, are now retaking their territory and exacting revenge: imagine a mashup of The Hunger Games (the heroine is a bow-and-arrow-wielding teenage girl), Harry Potter and the old Gold Key Mighty Samson, and you’ve got the idea. It’s not mind-blowingly fantastic, but it’s OK so far — the story is still in world-building mode, which gives it energy, and Trifogli’s art is just ethereal enough to make the mythological elements work. 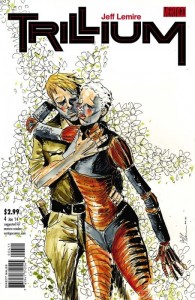 No one else draws quite like Lemire; Matt Kindt is probably his closest equivalent, in the way both have a deceptively-sketchy line and watercolor-y palette that are much more sophisticated and thought-out than they seem. This book involves two ancient temples: one on a far-future alien planet that’s being besieged by the remains of humanity, because it has the title flower that they need to survive, and the other in a Central-American jungle on early-twentieth-century Earth. There’s a little Avatar (the film, not the comic-book publisher) and a (very) little Indiana Jones mixed in, but at heart it seems to be an adventure that’s really about growing up and finding love; Lemire demonstrated in Sweet Tooth that he’s pretty good at those, so I’m more than willing to follow him here. 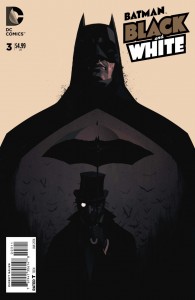 The only mainstream Big Two title this week (yeah, Trillium is Vertigo/DC, and Painkiller Jane is Icon/Marvel, but neither involves the parent company’s shared universe or characters), but it makes the cut because, well, look at that list of creators, and consider that it offers five eight-page stories by them, in old-fashioned and gorgeous-looking black and white, with classy bio pages and no ads, for $4.99. The Dini/Roux, which features Harley Quinn and Poison Ivy, will probably be the most popular, but the Hughes has a retro-pop style that’s charming and fun, and the others are just very very pretty to look at. Anyone who’s a fan of good-looking comic art: get this book.

With 40 years of experience in comic reading, collecting and reviewing, English Professor Phil Mateer has an encyclopedic mind for comics. Feel free to ask Phil about storylines, characters, artists or for that matter, any comic book trivia. He will post your questions and answers on the AABC blog. His knowledge is unparalleled! He is also our warehouse manager, so if you are looking for that hard to find comic book, ask Phil!
View all posts by Phil →
This entry was posted in New Comics, Reviews and tagged Alex + Ada, Batman Black and White, Drumhellar, East of West, Fatale, God Is Dead, Hinterkind, Legends of Red Sonya, Painkiller Jane, Protectors Inc., Suicide Risk, Ten Grand, Trillium, Uber. Bookmark the permalink.