All right folks! we’re back. Lots of good stuff this week, so let’s do this! 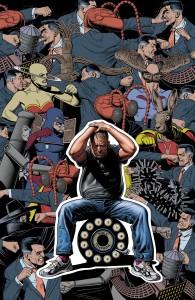 Welp, another one bites the dust! Like Demon Knights next week, this is the latest book to get the axe from DC. But holey moley!, does this thing go out with style. The increased price is to compensate for almost double the amount of story content and boy, do they throw a lot out here! The Dials themselves get fully explained, everyone has a proper motivation, the big villain gets his just comeuppance as strangely as everything else has been taken, and all, in all it’s fantastic finale. The story itself is still open-ended, and next months Villains stuff will give us a “Dial E” issue that I’m very much looking forward to. These 15 issues are immediately rereadable. Great stuff. 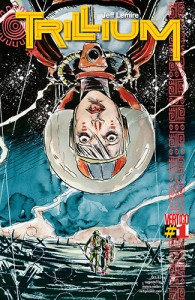 After his full series Sweet Tooth, Lemire drops  a new Vertigo mini-series. The cover to go with this is only for part 1.1, the book flips over for part two. It’s a wonderfully weird story, involving a man in a jungle, a woman in space, and the paths they take to end up meeting each other. I have a really weird complaint though. The art itself is exactly what I expect from Lemire, but the paper quality is too good. With Sweet Tooth they were using the cheap coarse paper and it made his art work really well. Here, all the pages are glossy and shiny and it just doesn’t fit with Lemire’s linework. You can tell I’m really stretching for criticism when I start complaining about paper… 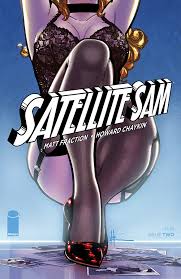 Sci-fi 1940’s noir with a side of cheesecake… you’d think Fraction wrote this story specifically for Chaykin to draw it. Actually, I firmly believe that’s what he did. The murder mystery of who killed the original Satellite Sam grows this issue, and everyone involved is going to suffer for it. Apparently the television show he starred in was already in rough shape, and this issue deals with the ramifications of all the corruption going down. Being in black and white was a fantastic choice, as it actually makes Chaykin’s wild layouts read better. This so far is a dark, twisted and interesting story. I can’t wait to keep reading. 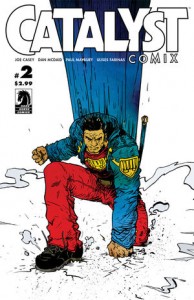 Casey’s reimagining of old characters continues to move right along. This is technically an anthology book, with three different stories that are seemingly unrelated, but I feel like at some point they’re all going to gel. The primary story is still focused on Frank Wells and his confusion with his life as a mediocre super villain. It’s the best story so far, but that’s just cause it’s had the most space to grow. The Amazing Grace story just involves her in a coma after truly saving the day (unlike Wells), and the Agents of Change is too weird to really explain. So far this interesting comic has had good results, and it will be fun to see where it goes. 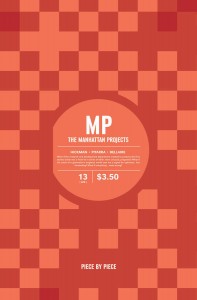 Do you guys ever get tired of me harping about how much I love this book? I think what makes it work is that almost every issue lets each of the characters get a moment when they need it. Everybody has their own plan, so this issue shows the balance being achieved among Einstein, Fermi and Groves. Laika the dog gets sent to space (again) which I can only imagine will pay off in a while. JFK shows up with a tremendous love of coke (of course!), and overall, I just love this stupid book. Just buy the trades, buy all the issues and read the thing already “why dontcha!” 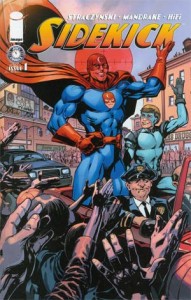 I want to like these books, I swear I do. The art alone should set the tone for a solid outing on both, but Straczynski just kills me for both of them. His scripts always seem like a combination of over-written and pretentious. It’s like he tries to be fun, but it just comes off heavy-handed. Sidekick sees a former sidekick kicked to the curb when his superhero gets killed. It has plans for the future, but the twists and turns are just “meh.” Ten Grand is crazy looking through Templesmith, but it feel like the writer isn’t trying anything new. This is all part of the “Joe’s Comics” line through Image, and I feel like it’s the first real misstep that Image has taken with it’s new titles.

And with that excessively bitter rant, let’s get onto some quick hits! 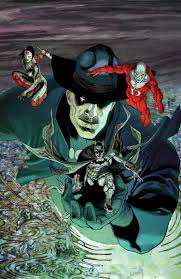 Phantom Stranger #11 Writer: J.M. Dematteis Artist: Fernando Blanco: This week’s Trinity War tie-in hits everything you’d expect from the Stranger in the underworld. It’s passable and OK, but not essential.

Hunger #2 Writer: Joshua Hale Fialkov Artist: Leonard Kirk: This book is still surprisingly fun, mixing regular Galactus with the swarm is a great idea, and I even like what’s happening with Rick Jones, believe it or not.

Deadpool Kills Deadpool #2 Writer: Cullen Bunn Artist: Salva Espin: Just because a book is stupid doesn’t mean it’s bad, and this book aptly proves this rule. It’s funny but totally and completely bizarre. Worth reading if you like Deadpool, or even if you don’t, cuz’ he dies. A lot. 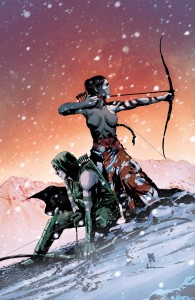 Aventers #17 Writer: Jonathan Hickman and Nick Spencer Artist: Stefano Caselli: This book keeps moving toward “Infinity” and I’m not sure I care. I just hope that this whole saga doesn’t hurt the amazing New Avengers book.

Iron Man #14 Writer: Kieron Gillen Artist: Greg Land: If you can survive Land’s mediocre art, you get a phone book involving Death’s Head and untrustworthy robots. Fun, but suffers because of the art. 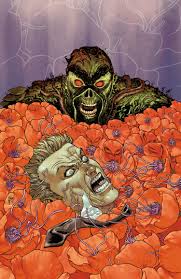 Swamp Thing #23 Writer: Charles Soule Artist: Kano and David Lapham: I feel like I shouldn’t like this, but I’m a fan. I’ll look at anything Lapham draws, and the story itself was a pretty solid two-issue piece. Fun stuff.

Detective Comics #23 Writer: John Layman Artist: Jason Fabok: This book seems better with every single issue. Layman’s proven that he’s one of the most competent writers in the business, and his work is just shining here.

Fatale #16 Writer: Ed Brubaker Artist: Sean Phillips: Guys, Fatale is still a book that comes out. You should buy it. The end.

And that’s the week! See you folks next time!