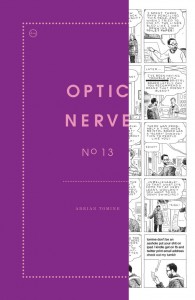 Tomine’s been publishing these comics through Drawn and Quarterly for almost 20 years, and even though he’s grown famous (he’s “New Yorker cover artist Adrian Tomine” now), he still manages about one a year. This, like the others, is very accomplished straight-ahead storytelling, with no fantasy, superheroes or other gimmicks. His precise panel layouts, carefully-constructed architecture and intense focus on character — especially the myriad small flaws that make us all wince when we see them in others, or ourselves — make him overlap with Daniel Clowes in a lot of fans’ minds. However, he’s less depressing; his characters scuffle and show signs of damage, but almost always leaven it with more humor than Clowes’, and often get more redemption (I’m thinking of the amateur horticulturalist in Optic Nerve #12, who ultimately realizes he’s being an idiot, and breaks out of it; Clowes’ characters are seldom given that much self-awareness). Here, after a one-page autobiographical artist-as-Luddite appetizer, the main course is a 24-pager about a 30-something woman who meets a 40-something guy in rehab, and how their shared passion for a local sports team gets her into and, eventually, out of a relationship with him. It’s observant, wise without ever being preachy, and, if you’re in the right mood, mordantly hilarious. The dessert, an 8-page story illustrating the diary entry of a young Japanese woman flying to America with her young daughter, is just as subtly powerful, with an open ending that can be interpreted as either heartbreaking or hopeful. In a perfect world, Optic Nerve would sell more copies than Avengers or X-Men; in the world we’ve got, at least it exists, and if you want to see what grown-up comics at their best can achieve, give it a try. 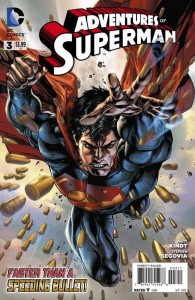 The point of anthologies like this is to give a writer like Kindt (of Mind Mgmt) 30 pages to write about Superman,  and no worries about continuity, and see what happens.  His “Day in the Life of Superman” story uses a Bronze-Age version of the character: powerful enough to help a Green Lantern in another sector, and handle a Boom-Tube hijacking to Apokalypse, all before breakfast,  but human enough to enjoy walking to the office with co-worker Lois later. Nicely done, especially the counterpoint plot showing how Lois spends her morning, sparring with an overmatched Lex Luthor, which moves along the bottom of the pages, echoing and commenting on the main story. Segovia gets to draw a lot of cool action panels, space scenes and aliens (including Darkseid), and then use a softer style, all close-ups and figure drawing, for the Lois sequence (the colorist, Jay David Ramos, adds some nice chromatic touches to help separate the two styles, too); then, when everything overlaps into a single world at the end, as Clark and Lois meet up for their daily walk, the effect is quietly perfect.

This is Morrison’s last issue, the capper to a years’-long Bat-run, although it’s quieter than you might expect, built around a Bruce Wayne/Commissioner Gordon conversational epilogue, with its climactic battle told in flashbacks. Since most of the action and twists have occurred in previous issues, this is more about putting things away, and settling accounts, although Morrison still has a few surprises, and can’t resist a B-movie style coda that’s also a wry comment on how easy it is, in comics, to not just rebirth a character, but multiply the stakes considerably. This hasn’t been one of Morrison’s OMG pyrotechnic extravaganzas, but it’s been fun, affectionate and dependably entertaining, with its take on Batman persisting past the new-52 relaunch and stubbornly keeping to its own all-Bat-history-inclusive world, and it’ll be missed. 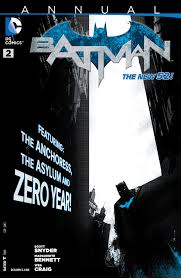 This is by Snyder, and has a “Zero Year” tag on the cover, but it isn’t part of the regular title’s continuity for that arc: instead, it’s an Arkham Asylum tale, set in the present but with flashbacks that introduce a new character who’s also one of the institution’s oldest inmates. Some OK bits, but kind of average, with competent-but-undistinguished art (which is ill-served by the inconsistent six-member inking crew) and no real hook for us to care about the debuting villainess.

Lots of X-books this week, and a good time to take stock of most of the 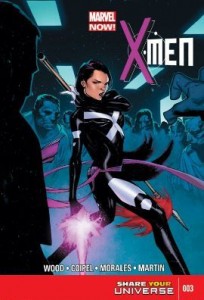 Marvel Now! relaunches of the franchise. Uncanny is the most mainstream and the most stylish, with the Bendis/Bachalo team providing crackling dialogue, great-looking people (with the addition of Dazzler to a cast that already includes Emma Frost, Mystique, Illyana and the Stepford triplets, Bendis has given his artist plenty of women who are both strong and eye-candy-worthy), and a strong connection to the rest of the Marvel Universe, as it focuses on Cyclops and his mission to mentor a bunch of new mutants. X-Men is also a crowd-pleaser, with its exclusively female cast (Storm, Rogue, Jubilee, Rachel, Kitty and Psylocke), more-than-decent art from Coipel, and a Wood plot that 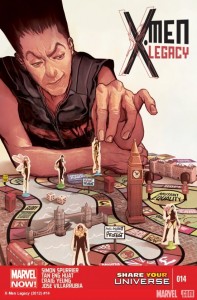 emphasizes teamwork and easy camaraderie; this third issue completes the first arc, and all three issues are still on the stands, so it’s a good time to check out the comic. Legacy is the quirkiest of the lot — not surprising, since it focuses on Professor X’s son David, who has hundreds of multiple personalities rattling around in his head, each with its own super-power. Spurrier’s given it a very Great Britain-ish slant, with a hero who stubbornly refuses to play by the regular rules, but has a surprising moral streak, and whose tentative romance with the X-recruit Blindfold is often charmingly awkward, and probably doomed. 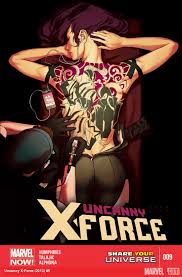 That leaves Uncanny X-Force, a book that’s shown flashes of promise, but has been mired in an over-long plot about Psylocke and her affair with Fantomex, who’s been turned into three different people and… well, it’s pretty stupid, actually, although there’s some Peter Milligan-style identity weirdness, and a lot of drinking and implied sex involved, so it’s not dull. All of that gets sort-of resolved this issue, fortunately, so maybe things will get back to Storm, Bishop, the rest of the regular cast and some kind of linear plot next issue. 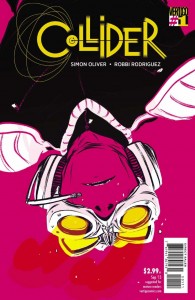 There’d been talk in the spring that DC’s Vertigo imprint was dying, but they’re making a new push for it now, with two first issues this week, and more to come. Collider is “classic” Vertigo, a science-fiction tale about what happens when the normal laws of physics (like gravity, or time flow) go wonky, inspiring the 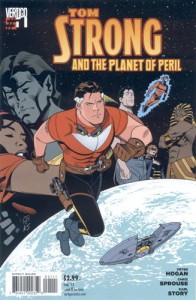 creation of the FBP (the Federal Bureau of Physics) as first-responders if all the students in your local high school start floating around weightlessly. It’s a cool concept, although this first issue barely touches on it, and the art is just serviceable (it could use an artist with a stronger, weirder style, like Michael Allred). Tom Strong offers a mini-series from the now-dead ABC/Wildstorm imprint, involving the title character traveling to an alternate-dimension Earth to get a serum to save his daughter’s life; Sprouse’s clear, sharp lines and heroic figure drawings help considerably, and Hogan offers a plot with suitably-high stakes and a springboard to lots of pulpy adventure, so this seems both the more familiar and the more commercial of the two books.

Speaking of pulps… this is a revival of the ’40s aviator character, and while it’s solidly done it’s, so far, very predictable (although this is the first issue, the Midnight reintroduction happened earlier in a serial in Dark Horse Presents), with its time-lost hero (brought here from 1942 courtesy of, naturally, the Bermuda Triangle), its granddaughter of a former ally who’s now a new recruit, its seemingly-immortal Nazi villainess, etc., etc. For the now-cheap $2.99 cover price, it’s not a bad way to spend 15 or 20 minutes, but I’m not sure there’s enough to make it stand out in a very crowded market. 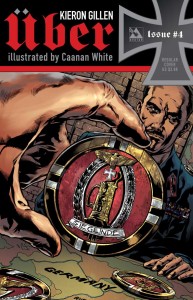 Gillen’s indy what-if tale about the Nazis developing superhumans right at the end of WWII is starting to accelerate, as the English and Americans race to get their own uber-soldiers developed (it’s a slow process, and one that only works on a tiny percentage of the population), and as the overall story rounds into shape (Gillen, as always, has a couple of entertaining pages of explanation/chatting/editorial material at the back, and he mentions there that he sees the whole thing as 30-60 issues, “probably leaning toward the higher end”), it looks like this will be a smart, compelling ride, and one of the better launches of the year. 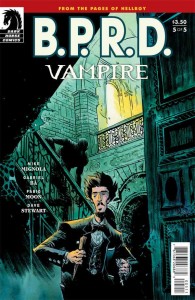 A conclusion (to this chapter, anyway), as the main character becomes a monster, the better to chase other monsters. Like Batman, Incorporated, it’s more an epilogue/conversation, and a setup for later stories, than a satisfying stand-alone ending, but Mignola, Ba and Moon make it such a cool comic, equal parts pretty and spooky, that readers won’t care.

Guardians of the Galaxy #5 — Writer: Brian 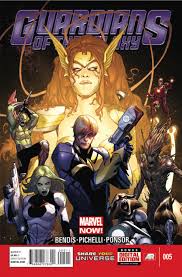 Somebody should probably tell Marvel that no one cares about Angela, because they keep cover-featuring her, and acting like her appearance is a big deal, but, seriously, 80% of the comics-reading public doesn’t even know who she is, and the 20% who do know don’t care. Fortunately, Bendis still does his typically-good job with the characterization and dialogue here, and Pichelli is an inspired choice as artist (she does a great Mantis, who makes a guest appearance, and wisely uses fangs and demeanor to keep Rocket Raccoon from looking too cute). In addition, this offers more about the universal timequakes caused in Age of Ultron, and has a last-panel reveal that promises to connect it to the upcoming Infinity books, so there’s more than enough here to keep the typical Marvel-continuity fan occupied and happy. 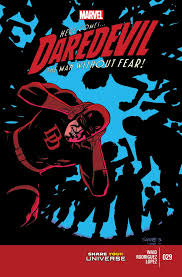 Two and a half years into his run on the book, Waid is still making Daredevil fun and edge-of-your-seat reading — here, he’s trapped in a courthouse overrun by Sons of the Serpent sleeper agents, and has to save a bunch of lives and figure out their plans while dodging bad guys, fooled cops, time bombs and other obstacles; it’s a great example of the analytical lawyer’s mind that sets Murdoch apart from other heroes, and most of it plays like one of those virtuoso real-time no-cut tracking shots that directors like Scorcese love. Specioal mention to Rodriguez, who manages to hold his own with some of the better artists who’ve graced this book, like Martin and Samnee, and enhance the visuals considerably by doing the coloring himself. 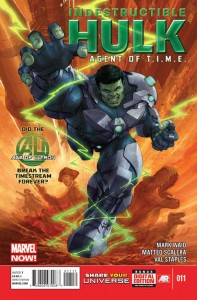 Waid’s other monthly book — here, he, like Bendis, deals with some of the time-broken problems that are plaguing the Marvel universe — ones that make time travel so dangerous that only the Hulk can survive it — so, accompanied by a robot with Banner’s brainwaves mapped onto it, he journeys to the Wild West. Lots of fun, with the usual Waid nods to continuity (you have to be a really old fan to remember Zarrko, the Tomorrow Man), and a promising next issue (cowboys and dinosaurs…). 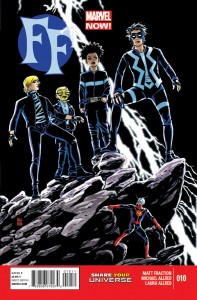 Allred’s back, and we get the main team against a miniaturized tiger (it’s a fair fight, because the FF are even more miniaturized), while the kids play Twenty Questions with Maximus the Mad. What more do you need to know to buy this comic?

With 40 years of experience in comic reading, collecting and reviewing, English Professor Phil Mateer has an encyclopedic mind for comics. Feel free to ask Phil about storylines, characters, artists or for that matter, any comic book trivia. He will post your questions and answers on the AABC blog. His knowledge is unparalleled! He is also our warehouse manager, so if you are looking for that hard to find comic book, ask Phil!
View all posts by Phil →
This entry was posted in New Comics, Reviews and tagged Adventures of Superman, B.P.R.D.: Vampire, Batman, Collider, Daredevil, Dr. Midnight, grant Morrison, Guardians of the Galaxy, Hulk, Optic Nerve, Tom Strong, Uber, X-men. Bookmark the permalink.