It Came From the Back Room #53 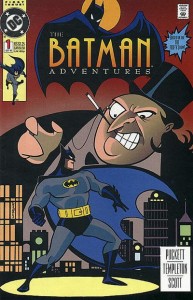 Standard recap: I’m slowly going through AABC’s one-million-plus back-issue room, restocking the boxes on the sales floor and pulling stuff to sell as discount/overstock/special items. I’m going through the alphabet backwards (don’t ask), and at my speed (especially now that school’s started again), this amounts to a three-year project.  This week, we’ve restocked the west-end discount racks (nearest the parking lot) with one Marvel and one DC “B” title. Marvel first:

Marvel’s African king (and Avenger) wasn’t the first black character or hero in comics, but he was the first with actual superpowers, and by far the most prominent; he originally appeared in Fantastic Four #52 and 53, where his origins — his name is T’Challa, son of T’Chaka; he lives in the technologically-advanced, hidden African kingdom of Wakanda; that nation’s great wealth comes from vibranium, a metal with vibration-dampening and other almost-magical abilities — were chronicled by Stan Lee and Jack Kirby (both of whom claimed responsibility for 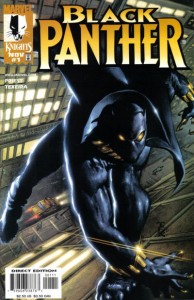 coming up with the story, but we’re not getting into that debate here…).

He first had his own solo series in Jungle Action #s 5-24, in the early ’70s, and then in the Kirby-created Black Panther #1-15 in the middle of that decade. Neither book is on the discount racks, so we won’t talk about them here, except to note that the Jungle Action series, by Don McGregor and (usually) artist Billy Graham, was an ahead-of-its-time multi-part epic, one of those semi-unknown gems of the sprawling, loose-limbed Marvel of the post-Stan Lee, pre-Jm Shooter era, when creators like McGregor, Gerber, Starlin and Englehart were largely left alone to push the boundaries of the medium.

The first BP issues we do have discounted are from the next regular-series incarnation of the Panther: the Christopher Priest/Sal Velluto one from the late ’90s. This was by far the most successful volume to date, managing over 60 issues between 1998 and 2003, and its T’Challa is smart, resourceful, and in command of enough riches and resources to be a major player on the world stage, and give A-list characters like Reed Richards and Tony Stark a run for their money. He’s a Batman type: always thinking, with a Plan B (and, usually, Plans C, D and E) in place should his original schemes not work out, and his adventures are well worth seeking out. 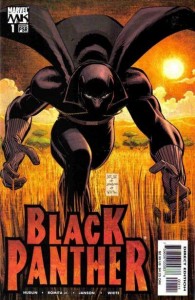 The next volume, from 2005, has Reginald Hudlin on script and John Romita Jr. on the art. Hudlin was an interesting choice: a former president of BET, with directing credits including House Party; this gave him plenty of creative credit, but his lack of experience in writing comics sometimes came through, and his version of the Black Panther sometimes didn’t seem like the T’Challa that readers had grown to know. This version of the character is probably best known for his (now, apparently, annulled) marriage to the X-Man Storm, and for its connections to the various Marvel crossover events (House of M, Civil War, etc.) of the last eight or nine years. Romita Jr., unfortunately, leaves after the first six issues, and the most regular penciller after that is Scott Eaton, followed by 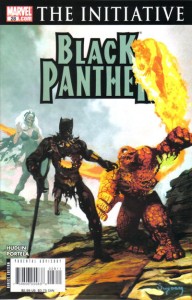 Francis Portella. There’s a period around issues 26-35 where the Panther and Storm are in the Fantastic Four (with the Thing and the Human Torch, Reed and Sue having left to go reinforce their marriage), and a galaxy-spanning story involving the Marvel Zombies and a Skrull gangster planet are pretty good — although, even here, readers who want the best version of that foursome’s adventures should be reading the Dwayne McDuffie FF from the same time period instead. By the end of the run, the Panther has given over the costume and powers to his sister, who gets her own 12-issue series in 2009; after that, there’s Black Panther: The Man Without Fear, a continuation of the numbering of the old Daredevil title putting the Panther in Hell’s Kitchen in NYC, taking over DD’s old role as urban guardian — that was published for about a year, and was the most recent comic featuring the Panther in a title role, although it surely won’t be the last. 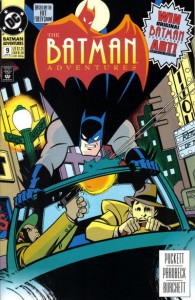 I’ve most recently been sorting out Batman books, and this week the other side of the special racks are spotlighting all of the TV cartoon tie-ins: Batman Adventures, Batman and Robin Adventures, Batman: Gotham Adventures, Batman Strikes, Batman Beyond, etc. These are enormous fun; they’re comics as they used to be, mostly with self-contained, done-in-one stories, classic villains, and more kid-friendly plots than are sometimes found in the mainstream Batbooks. Many of the first Adventures issues, starting with #7, are drawn by Mike Parobeck, one of the first mainstream comics artists to draw in the cartoonier, animated style associated with people like Bruce Timm; tragically, he died in 1996, a few days before his 31st birthday, of 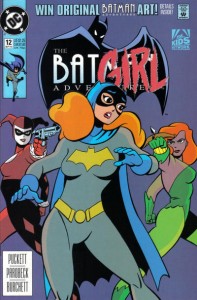 complications from diabetes, but his legacy of fun, throwback comics art lives on, and can be seen through his influence on a number of today’s artists. All of the “cartoon” books are good, though, and follow a similar style: they’re great antidotes to the overemphasis on long continued stories, crossovers, and grim ‘n’ gritty grossouts in so many current Batman comics, and make fun, easily-digestable presents for younger readers (I’m always recommending them to parents of pre-teens who come into the story searching for something suitable for kids). They’re also surprisingly hard to find — the circulations are considerably less than the “mainstream” Batbooks, and key issues can be especially scarce (like #12, the first appearance of Harley Quinn, and also-Harley-themed special Mad Love, which are listed at $30 and $24 in the Overstreet Price Guide, respectively) — so this is a perfect opportunity to fill some holes in your collection cheaply (no, we don’t have the two expensive ones on the discount racks, although we do have a few copies of each available at their Guide prices), and end up with some great reading besides.

With 40 years of experience in comic reading, collecting and reviewing, English Professor Phil Mateer has an encyclopedic mind for comics. Feel free to ask Phil about storylines, characters, artists or for that matter, any comic book trivia. He will post your questions and answers on the AABC blog. His knowledge is unparalleled! He is also our warehouse manager, so if you are looking for that hard to find comic book, ask Phil!
View all posts by Phil →
This entry was posted in Comics History, News & Promos and tagged Batman Adventures, Black Panther, Christopher Priest, Mike Parabeck, Reginald Hudlin. Bookmark the permalink.