The Latest and Mostly Greatest #48 by Dan! 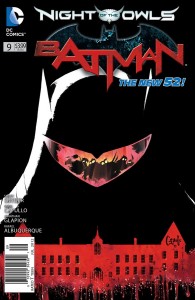 This is exactly what a crossover should be. Every story is tied into the main story, and so far every tie-in has been better because of the main story. This is probably the first time I can say that tie-ins actually work with this type of story. Basically,  the Court of Owls is set to destroy Gotham City and all the main people that help keep it going. Important people die, pieces are put in place, and everything is set for Batman to seriously  kick some ass starting next month. This week also has tie-ins to Batgirl and Batman & Robin that focus on how each character deals with what’s going on. I’ve seriously been overwhelmed by how good this entire story is. Just… just read it. It’ll remind you why you like superhero  comics.

What’s left to say about Fatale? What’s left to say about Brubaker and Phillips? The end of “Book One” hits with this issue, and I still can’t quite tell you what in the world is going on. It’s still absolutely beautiful to look at, and it is probably one of the best books artwise that you can find in this market. The pieces moved into some kind of end point place with this issue, and in Brubaker’s back matter (a short half page at the end of this issue) he thanks everyone for making this the highest selling book he’s ever written. What a difference being published by Image over Icon can make, huh? I’m totally the type of guy to try to sell you more, so don’t forget to check out Sleeper, Criminal, and Incognito. Those are all better than this book, at least so far, but I’m still completely invested. 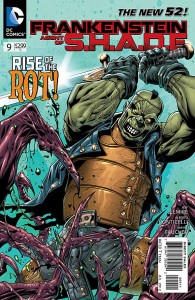 What a difference an inker makes. The last 3 issues of this book have looked drastically cleaner, and I don’t know how I feel about that. The story has still been pretty good, but I believe Lemire is done after this issue. He’s put a bunch of things in place for Matt Kindt to take care of, and I’m excited to see where he goes with it. This issue very, very loosely ties into the story that happened with Animal Man. If you wondered “what happened to that police officer that got infected by the Rot and became all puffy?” then this is the book for you. It was good stuff, and Frankenstein is still probably the biggest surprise of the New 52. 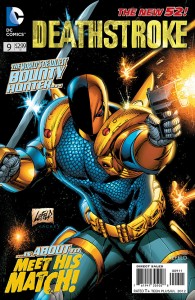 Hoo boy. So changes have been made to the new 52 books, and I can’t say that they’ve all been made for the better. The funny thing is that it’s not like either of these books were very good to begin with, so I’m pretty sure that their sales are going to go up with a Liefeld bump. Liefeld takes this opportunity to introduce more of the Wildstorm characters back into the New 52, and I can honestly say that I do not care. Hooray. Deathblow is back. If that’s a selling point for you, then so be it. I just figured I’d point out that this comic exists, and that’s all I have to say about that. 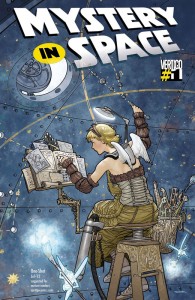 Man, this is a damn strange comic book! It’s another eight dollar one-shot like The Unexpected from several months ago. They’ve been very smart about this by hiring higher-end talent to get things moving right along. It’s good quality sci-fi stories told by people who know what they’re doing. It switches in tone from Twilight Zone twists, to hyper serious, to odd comedy. It gets high brow when Ann Nocenti starts talking about cats; it’s pretty to look at when you get Kaluta art, you get Kyle Baker just being Kyle Baker… and it’s all topped off with Mike Allred drawing a story about conception. I’m not making that up. What’s not to love? 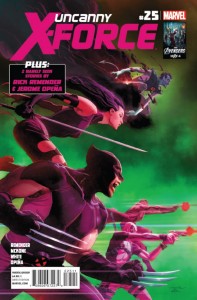 Uncanny X-Force is a strange beast. The story is always solid, but it relies heavily on the art. The last story didn’t quite hit the mark, and a couple times I had no idea what was happening. This special overpriced 25th ‘anniversary’ issue moves a couple of characters around and uses McKone art. Now I personally love Mike McKone, but this all seems a little bit rushed. There’s also two extra stories in the back that are the first time that Remender and Opena worked together to do Wolverine and Deadpool. It’s a story that reads  just fine, but I expect better from this title.

And now, the quick hits!

Wolverine and the X-men #10 Writer: Jason Aaron Artist: Chris Bachalo: Plots move along, but I can honestly say I have no idea how this fits into the main story. Much like…

New Avengers #26 Writer: Brian Bendis Artist: Mike Deodato: Which establishes how some redhead is kind of Iron Fist, and all those SHIELD stories I’m reading are being destroyed by Bendis and I can’t stand this crossover and I’m writing a run-on sentence cause I’m so angry…

Green Lantern 9 Writer: Geoff Johns Artist: Doug Mahnke: Hmm, it appears that Mahnke is needing a lot of inkers, it’s still good stuff, but you never know what you’re gunna get on each page. 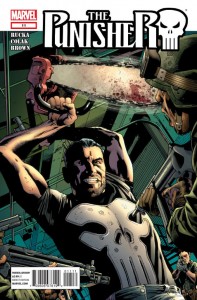 The Punisher #11 Writer: Greg Rucka Artist: Mirko Colak: This is a weird book that I find myself enjoying just enough to mention it. It’s good, but not quite great yet;  it’s improving.

Crossed Badlands #5 Writer: Jamie Delano Aritst: Leandro Rizzo: Well, this is pretty dark and weird, isn’t it? You know what you’re getting with Crossed, and this is most certainly no different.

The Ultimates #10 Writers: Jonathan Hickman & Sam Humphries Artist: Luke Ross: I love everything about this book, and I’m bummed for when Hickman leaves. Good stuff.

And that’s the week! With the Professor out of town I’ll be back again next week, so ya know, get excited!