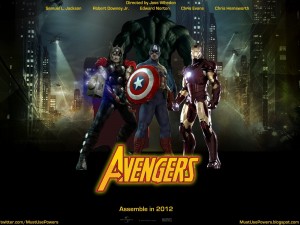 Avengers Movie Review first:  go see it.  A small series of misadventures left us walking into the theater halfway into the previews (so I missed the Dark Knight trailer), and meant we had to sit in the second row — but it was a 3D movie, and it turns out that’s the perfect spot for me; I’m nearsighted in one eye, and farsighted in the other, so 3D effects don’t work well, but when it’s that close they work fine. Even better, Harkins is wise enough to invest in good theater seats with comfortable headrests that lean back easily, so no stiff neck, and the movie engulfed me; the 2.5 hours just whizzed by happily, in a perfect summer movie rush. Who would have thought the Hulk, who’s on screen very little, would get most of the best bits (“Puny god”) ? Halfway through the credits is a scene that reveals the Master Bad Guy, whom long-time Marvel fans will recognize and have to explain to their seatmates; at the very end of the credits, there’s yet another small scene that plays off of an earlier line, silent and quick but note-perfect, and it’s worth staying for (only about a fifth of the theater I was in stayed for that one). The 12-year-old me would be very pleased that the world has progressed to the point where a movie like this can be made, and so believably and enjoyably that the whole world’s going to see it.

I’ll mostly do the big main-company stuff, some of which is still out there, with a smattering of the smaller-press stuff that you had to brave the FCBD crowds to score…. 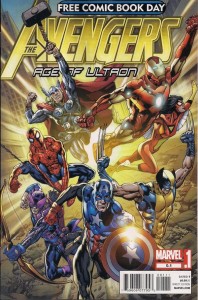 It’s a reprint of Avengers #12.1, but it’s a free 31-page Avengers comic by Bendis, Hitch and Neary, which means it looks and feels great; Spider-Woman tracks an alien artifact to a cave, but runs into some bad guys, and one thing leads to another and before you know it, there’s a big Avengers/Intelligentsia fight, and then there’s Ultron. It’s a set-up for Bendis’s swan song on the Avengers, one he’s been teasing for well over a year now; Marvel’s marketing of this shows they learned some lessons from DC and Darkest Night, which  offered a similar slow, simmering build-up. As a way of goosing interest in an upcoming event, this book does its job very well. 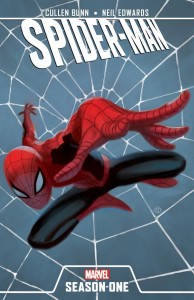 This one only offers 20 pages, reprinted from the graphic novel of the same name and showing Peter getting bit by the spider and starting to discover his powers, with the rest of the pages house ads and hype. It’s fine, but an often-told story, and one that it’s not clear needed to be told again;  in the competition for best modern retelling of the Spidey myth, it doesn’t look like it’s going to make Ultimate Spider-Man worry too much.

The first 11 pages, by the first three art teams, are the origin of Pandora, the hooded woman who’s been lurking in the background of most of DC’s books since their relaunch (yes, she’s that Pandora). That’s followed by an intro page from Lee, plus a four-page foldout, hyping the next big JLA event next year, “The Trinity War,” which presumably involves Pandora too, and looks to involve everyone fighting against Superman, Batman and Wonder Woman. The rest of the comic is two-page previews for four or five of DC’s other upcoming books. That makes it more nakedly commercial than the Marvel books, although a four-page Lee foldout is nothing to sneeze at, especially for free. 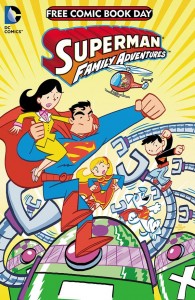 I swear, that’s how it’s listed in the indicia. This “Super Sampler” offers Green Lantern and Young Justice stories for younger readers, based on the TV cartoons; the GL is a 10-pager written by Art Balthazar and Franco, and illustrated by Dario Brizuela, and involves Hal Jordan and the GLC against Myrwhydden, a silver-age era space wizard. The Young Justice is just a 5-page promo of the YJ book, not enough to make an impression — but the flip side of the comic, the Superman Family Adventures, is by Balthazar and Franco in the style of their Tiny Titans; it’s a promo of a new monthly comic by that same team. Imagine the charm of TT, transferred to Superman, complete with Clark, Lois, the Daily Planet, Supergirl, Superboy and Krypto, and you can see why, even at just 5 pages too, this is the most welcome part of the giveaway. 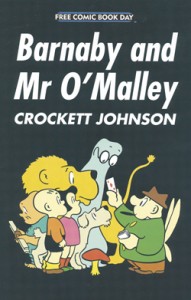 Fantagraphics’ FCBD entry touts their new reprint project. Barnaby lasted for ten years as a newspaper strip; the title character is a 5-year-old boy, and Mr. O’Malley is his fairy godfather, a cigar-chomping, amiable W.C. Fields-ish sprite who finds it hard to do much real magic, but knows so many ghosts, elves and other denizens of the fantasy world that he makes a great companion. The strip is a lost classic, and well worth a try; see if the free offer here doesn’t addict you to its quirky and endearing appeal, and make you pick up the expertly-packeged first volume of the book collection this summer. 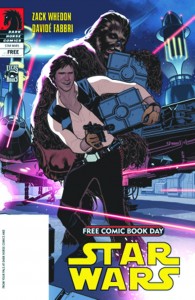 The first Dark Horse FCBD entry starts with a Star Wars 10-pager starring Hans and Chewie, with a script by Zach Whedon and art by Davide Fabbri and Christian Della Vecchia; the Serenity tale, also 10 pages, has another script by Whedon (this one executive-produced by his father Joss, the creator of the characters), and art by Fabio Moon. There’s also the first two pages of a (very) short story involving the new teen-girl-fights-monsters fantasy series Alabaster, one that’s concluded in…. 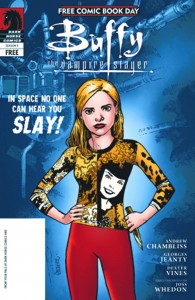 Dark Horse’s second entry offers an 8-page Buffy-in-space story (courtesy of Spike’s alien ship), written by Andrew Chambliss and with art by Georges Jeanty and Dexter Vines; it’s also another flip book, with the other side being an episode of Felicia Day’s gamer-centric The Guild, drawn by Jonathan Case (and, nestled snugly in the middle, are the last two pages of the Alabaster story).  Dark Horse does licensed properties about as well as anybody ever has, and their comics-only stuff always offers well-constructed, imaginative alternatives to the same old superhero genres that Marvel, DC and Image have mined so thoroughly, so these two giveaways are worth picking up just because they’ll expose you to some entertaining books you might otherwise have 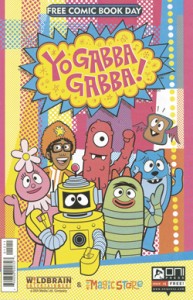 missed (the whole point of this exercise for publishers, after all).

Oni Press offers four stories based on (obviously) the TV show; comics fans will want this because one’s an 8-pager with art by Michael Allred, and another’s 5 pages from Evan Dorkin and Sarah Dyer (who’ve also contributed scripts to the show itself). 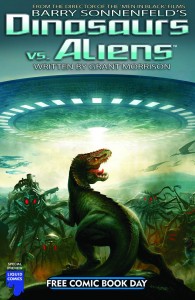 This is a high-concept creation from Barry Sonnenfeld, the director of Men in Black, and would be unremarkable except for the fact that he somehow corralled Grant Morrison to write the thing; this FCBD book has seven pages from the graphic novel by Morrison due out this summer, with reasonably cool-looking dino art by Mukesh Singh, padded with a bunch of sketches and Morrison’s script. 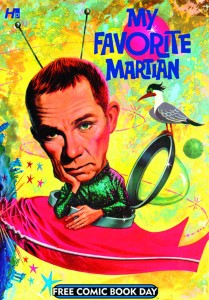 This wins the award for weirdest FCBD entry: it’s a reprint of the Dell first issue from 1964, a tie-in to the TV series starring Ray Walston and a very pre-Hulk Bill Bixby; apparently, Hermes is doing this to tout a hardcover volume reprinting the first five issues of the comic’s run. I mean, OK, the art in the first issue is by Dan Spiegel, and a later issue features Russ Manning, but… really? There’s a market for this? For $49.95? Take the free book, which offers 20% of the hardcover, and let’s call it a day.

With 40 years of experience in comic reading, collecting and reviewing, English Professor Phil Mateer has an encyclopedic mind for comics. Feel free to ask Phil about storylines, characters, artists or for that matter, any comic book trivia. He will post your questions and answers on the AABC blog. His knowledge is unparalleled! He is also our warehouse manager, so if you are looking for that hard to find comic book, ask Phil!
View all posts by Phil →
This entry was posted in New Comics, Reviews and tagged Avengers, Barnaby, DC Nation, Dinosaurs vs. Aliens, FCBD, My Favorite Martian, New 52, Serenity, Spider-man, Star Wars, Yo Gabba Gabba. Bookmark the permalink.