The Latest and Mostly Greatest #46 by Dan!

Game on folks, let’s make this quick! I have a baseball game to go see! 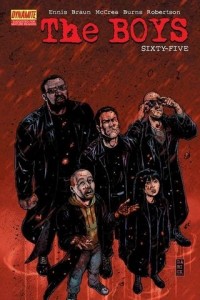 Holy moses.. this comic! Ennis took about six pages to explain everything you needed to know about the situation between Hughie, Black Noir, Homelander and Butcher. Six pages! And it all made perfect sense; it made we want to re-read 64 other issues, and it basically blew me away. Not to mention the fact that Russ Braun has really made his mark on this title. I’m still a bit bummed that Darick Robertson wasn’t around to do the entire thing, but Braun has done a helluva job putting it all together. It’s weird, because this could have been a completely unsatisfying final issue, and I would have been totally OK with that. Absolutely Fantastic. 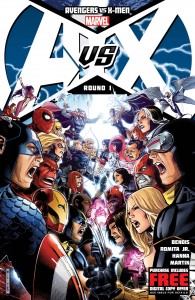 Then there’s this. The next big Marvel event starts with a resounding thud. I feel like they’ve been forcing this version of Cyclops that wants complete control down our throats for a few years now and it just doesn’t quite work. The plot is overly aggressive, and doesn’t give me any reason to really root for the X-Men in any way. The art is pretty much the standard fare for Romita Jr. these days, except it feels slightly rushed. I keep wondering just how strong these four writers and 47 artists approach is going to be, and so far I haven’t been that wowed. I expected more, and so far it’s not delivering.

Ah, the X-men title that’s working despite an art style I don’t like! Bachalo is so stylized that it’s never quite worked for me. I can understand why others would love it, but I just can’t quite get there. But Aaron is absolutely killing on this book so it’s impossible not to like everything about it. This issue is fairly Beast-centric, and that’s not a bad thing. It’s an interesting idea to get Sabretooth involved in all these different areas (he’s been popping up in several x-books) as if he’s planning something huge. I’d like to see something actually happen, but because of the AVX stuff, I guess right now it’s more of a wait and see. So… We wait. Good stuff for now though.

So this is kind of an odd statement, but I think I’d like this book better if it was both Lunas together. They work for me like the Coen brothers do for movies. I don’t wanna separate them, and you shouldn’t either. This tale of a guy who leaps from his body when he sleeps and can tell others what to do while in an astral state feels like it’s been delayed in coming out, and that’s never a good thing with the Luna brothers. They are kings of the slow burn, but delays won’t make that work any better. I find myself wondering what the big reveal is going to be, or what twist is going to keep me around, but so far the “random evil person might be whispering” riff isn’t really putting it all together for me. I will give it time, but not too much, and delays on this book won’t make me want to keep reading it at all. 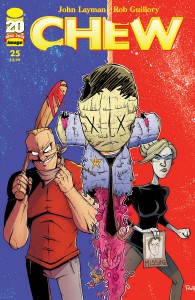 Man this book is really awesome! I remember when the whole hubbub over this started and I couldn’t care less, but Image comics have really been working their way into being the alternative comics publisher, and it all started with Chew. This whole storyline has had the main character completely incapacitated for the entire time and it’s still absolutely fantastic. The art itself is full of one-shot gags and jokes that only work when you’re really paying attention. To know that Layman has a 60 issue plan is awesome, and that he’s thought out pieces of it (there’s a clip from Issue #60 in here), is even more fun. Check back with me in 35 issues (Three YEARS LATER), and we’ll see if it still hold up. But for now? Great stuff. 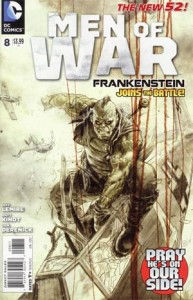 So this is the official wrap up month for six of the New 52 titles, Static Shock, OMAC, and Hawk and Dove all ended this week as well. Men of War never really hit it’s stride, and didn’t appear to have any idea what it wanted to be. HOWEVER, this 8th issue finally had a solid story, but what would you expect from the writing team? If this had been the way the book was for the first seven issues, I think it would still be around. This story of Frankenstein and J.A.K.E. fighting in World War II would have been totally awesome to read about, but nobody thought of it until now. This is also worth noting, as it’s Kindt’s first work with Frankenstein, a title he’ll be taking over soon. If it’s anything like this, don’t expect any drop in quality. It’s good stuff. 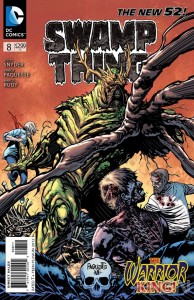 These books tie together just loosely enough to make me happy. You don’t have to read either of them to enjoy the other, but they work together to give you a more complete story. Swamp Thing is the highlight with Paquette drawing some of the craziest dead buffalo heads you will ever see. It’s an extremely intense book that does it’s job keeping me invested. Animal Man is transitioning artists, and Pugh is absolutely killing it in his first work on the title since a run many moons ago. I like everything about both of these books, and based on sales, it seem like you guys are too, so do I really need to say any more?

Casanova: Avaritia III Writer: Matt Fraction Artist: Gabriel Ba: Fraction’s ramblings are absolutely priceless on this title, and Ba’s surreal art makes it even better. This book is the craziest, most entertaining comic book on the market right now.

Detective Comics #8 Writer/Artist: Tony Daniel: I wish I could just write a review making vomit sounds for five sentences, but Alan wouldn’t be happy. (On the contrary, it does sound amusing!…editor Alan) Just know this is still really, really, REALLY bad. That is all. 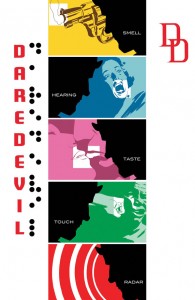 Daredevil 10.1 Writer: Mark Waid Artist: Khoi Pham: The perfect jumping-on point for the five of you that aren’t already reading this. Pham is trying to ape the style of Marcos Martin, and it works. This book is amazing, and there’s only been 11 issues of it? Crazy.

Age of Apocalypse #2 Writer: David Lapham Artist: Roberto De La Torre: I’m still enjoying this latest drop into the alternate reality story way more than I should be. It’s fun stuff and worth checking out so far.

Sweet Tooth #32 Writer/Artist: Jeff Lemire: You should be reading Sweet Tooth. That is all.

And that’s the week! We’ll be back as soon as we feel like it, so enjoy what you get!