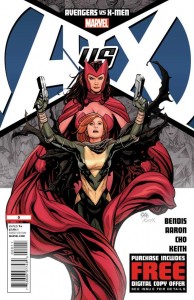 Bendis provides a Scarlet Witch story wherein Wanda (a) fights M.O.D.O.K., (b) talks to Carol Danvers, who convinces her to go to Avengers Mansion, and (c) actually goes to said mansion, wherein she meets the Vision (it’s a good idea to read Avengers #24.1 before this book, if you’re wondering what the Vision is doing there and why he acts the way he does), and things don’t go well. The Cho art is fun to look at, in its mildly cheesecakey way, and the story is typical Bendis; it’s there to establish Wanda as outcast from the Avengers, and does its job, although there’s a mildly cringe-inducing “even androids can cry” moment at the end.

The Aaron story focuses on Hope Summers, as she (a) fights the Serpent Squad and (b) 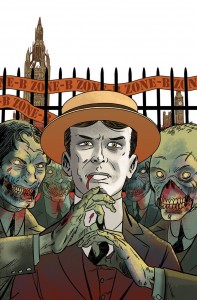 has a discussion with Scott and Emma about the Phoenix Force, and how it’s coming to Earth to get her. Same Cho art; Aaron does his job at establishing Hope as a badass, and also someone apprehensive about her future — there isn’t the nice turn of phrases in the dialogue that Bendis provides, but then again there aren’t any crying robots either, so it probably evens out. Nothing AvsX-y actually happens, but the pieces get moved into place, and as a taste of Marvel’s big summer event, this accomplishes its goal If they really wanted to promote that series, Marvel should have made this $2.99 instead of $3.99, but let’s not get started on their insane pricing policies right now — we have a lot of other books to review. For example:

Vampires and zombies in Victorian England; what else do you want to know? Abnett’s story sets things up efficiently and establishes its quietly-mannered detective main character well enough, and Culbard’s art offers a clean, clear, fine-lined style that reminds me of Javier Pulido; that’s enough to bring me back for the second issue.

Fans of Truman’s Scout or Jonah Hex should seek out this indy title; it has that same blend of late-1800s Wild West setting and Clint Eastwood hardcases, seasoned with just enough mysticism and fantasy to make things interesting. It’s drawn in his usual gritty Western style and written by his son; $3.99 for a 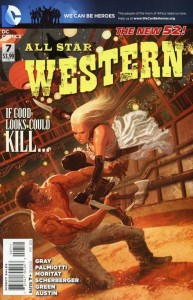 black-and-white book would be pushing it, except that the lush art looks so good that way that the lack of color isn’t a problem.

Speaking of Westerns… Jonah and company are in New Orleans, not Gotham, this issue, to track down a killer — except that Jonah gets sidetracked into an Ultimate Fighter/gladiator arena kind of deal, and fights the inevitable Great Big Guy, after which the also-inevitable tiny ass-kicking girl appears. Moritat makes it all look really good; this is one of those books that’s always near 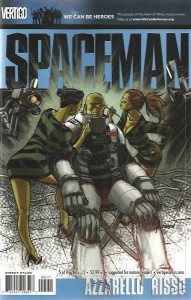 the top of every critic’s “New 52” lists, and if you haven’t tried it yet this first part of a new story is a great place to start.

Events continue apace, as the noble-but-flawed main character continues to try to do the right thing, surrounded by others out for the main chance instead. With the series at its halfway point,  you’re either buying this already or you’re not, but it’s keeping my interest; I like how the nine-issue format is going to force the creative team to end the thing before it gets too drawn-out (100 Bullets, I’m talking

to you); although I still have some doubts about their ability to deliver a satisfying ending, but am more than willing to stick around and see.

Carey’s been adding a lot of these “.5” issues, wherein we don’t see the main characters, but get side stories and filled-in details about the Unwritten world instead. This one introduces a deus ex machina that can pop up conveniently later in the series when a rescue is needed; otherwise, it’s a story about a little guy who gets caught up in vast events, the kind of tale that Carey and Gross do very well. 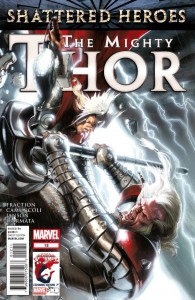 Finishing up the title’s second big story arc, as the title character returns and things are put right. The best part is Loki, who narrates and, both here and in his own book,  Journey Into Mystery, continues to be the most intriguing part of the New Asgardia: simultaneously the smartest, the most naive, the sneakiest and the most conflicted godling in the room. 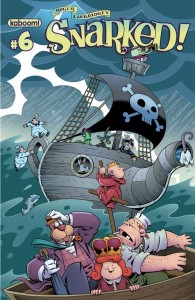 If you liked Langridge’s Muppets (or his writing on the charming but short-lived Thor, The Mighty Avenger), you’ll like this cheerful, adventurous romp about a young princess and her brother searching for their lost father, accompanied (and pursued) by various Lewis Carroll characters like the Walrus, the Carpenter, etc. Langridge just uses those names as jumping-off points for his own kid-friendly (but sometimes dangerous) fantasy world, and this issue, like the others before it, shows why he’s a creator worth following. 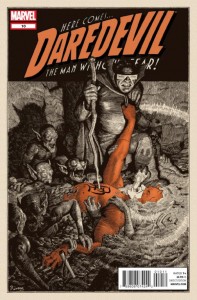 The second of a two-parter with the Mole Man, so get #9 first, and have fun with Matt’s complicated-but-fascinating life, one that’s redeemed whenever he gets to put on his costume and swashbuckle around town. Most of this issue takes place underground, which cuts down on the swashbuckling, but there’s the Rivera brothers’ art (look at that cover!) the fine coloring by Javier Rodriguez, and, as always, Waids’s clever, compassionate scripts. I just finished sorting out back issues of DD this week, and this new incarnation of the title is a certified hit: we’re just 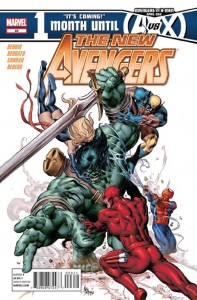 about sold out of the first eight issues, as everyone slowly discovers its charms, and they’re hard to find everywhere. See what the excitement’s about now, while this team is still going strong; there’s no sense on missing out on any more of it.

More Bendis stuff, as if his chapter on AvsX wasn’t high-profile enough. The New Avengers wraps up that title’s part of the Norman Osborn continuity, as the Dark Avengers get wrapped, bagged, tagged and filed away until next time. Avengers is a Vision return (the current “I’m done

repairing myself since She-Hulk ripped me into little pieces” one), and offers some setup on the Vision/Scarlet Witch relationship that leads into AvsX #0. Moon Knight is, I think, the penultimate chapter of Bendis and Maleev’s run on that title, and is mostly a fight with Madame Masque over the head of Ultron (yeah, it sounds stupid to me, too, but it’s likely setting up Bendis’s last big Avengers story with that adamantium bad guy, so you’ll probably want to check it out for that, if not for the pretty-looking Maleev art and the typically-fun Bendis character bits).

With 40 years of experience in comic reading, collecting and reviewing, English Professor Phil Mateer has an encyclopedic mind for comics. Feel free to ask Phil about storylines, characters, artists or for that matter, any comic book trivia. He will post your questions and answers on the AABC blog. His knowledge is unparalleled! He is also our warehouse manager, so if you are looking for that hard to find comic book, ask Phil!
View all posts by Phil →
This entry was posted in New Comics, Reviews and tagged Avengers, Avengers Vx. X-Men, Daredevil, Hawken, Jonah Hex, Moon Knight, New Deadwardians, Snarked!, Spaceman, Thor, Tim Truman, Unwritten, Vision. Bookmark the permalink.