The Latest and (Mostly) Greatest #39 by Dan!

So… funny story. I got a real job. (What are we….chopped liver? Editor Alan!) But I don’t have the actual guts to just up and quit this job, so you won’t be seeing any less of me here on this blog. Let’s do this! 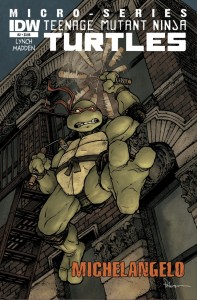 All right you guys, I don’t’ know why I feel like some kind of huge sell-out, but I am absolutely Loving this new TMNT series. This micro-series is not even remotely a step down in quality from the current series, and it’s just pure fun. I know the name Andy Kuhn, but I can’t place where he’s from. His art is just the right amount of cartoon-y to keep you interested. The story is just what it says, a solo story of Michelangelo. He goes out for a night on the town of some fun, and “hilarity ensues.” I don’t have any other word to describe it aside from fun, so I’ll go with that. It’s fun! 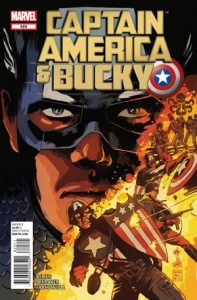 This three-pack of Brubaker goodness is extremely Captain America heavy, and it actually improves as you go down the list. McNiven apparently couldn’t finish his end of this story, so Camuncoli makes a jarring fill-in. Since Alan Davis is a real artist, he’s already knocked out probably all of his storyline and more. The stories do carry over, so don’t read one without reading the other. They’re both good, but McNiven’s speed is just a pain. The Bucky title gets the award as the best of the lot just because Francavilla is around. That’s basically all you want from a comic is super pretty art like this. They’re all quality stories, but the Bucky stories have been my favorite for a few months now. 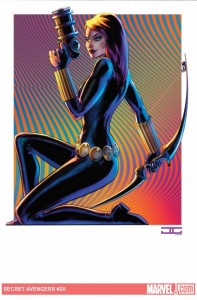 I’m still not 100 percent sure what I actually read here, but I know I liked it. A completely bizarre time-travel story based around the Black Widow sees he encountering characters I’m not familiar with, exhibiting powers and things I don’t know about and blowing my mind completely. Ellis’ run on Secret Avengers has been straight up to par with his Thunderbolts work. It’s really too bad he hates superhero work so much because he is just so damn good at it. He brings different ideas and stories every time he writes. It’s some of the most fun you can possibly have with a comic. 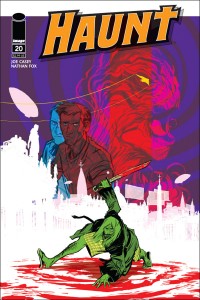 Joe Casey is without a doubt the most underrated mainstream comic writer in the world. Vengeance was completely off my radar, and I’m a little disappointed in myself. It’s been an entire story based on the second generation of villains, and actually embraces the changes that have actually happened in the Marvel Universe. It’s also all tied together with the character of Zodiac, which Casey already used in the way-rad self-titled series a couple years ago. His artist on that story was Fox, who he works with on Haunt to great effect. I can’t praise this Haunt stuff enough, it’s leaps and bounds better than the original material they had to work with, and two issues in is already better than the other 18. 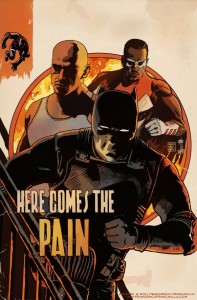 The best series you couldn’t be bothered enough to read. And it’s coming to an end. You all have no one to blame but yourselves. Like Thor: The Mighty Avenger before it, this comic is just too good to last. This is the point in the story where everything is coming to a head. Black Panther is working to defeat Lady Bullseye and Typhoid Mary in a quest to bring down Kingpin. Here’s what confuses me. This is clearly a Daredevil comic, and it’s a good one. So why didn’t you buy it? Comic reading public… you have disappointed me. That is all. 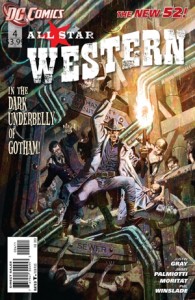 I’ve preached about the carry-over from the main Jonah Hex series before, and I’ll admit a sense of trepidation about Palmiotti and Gray doing ongoing stories instead of their traditional one-shots, and each time around I have been proven wrong. Month in and month out, All-Star Western has been one of the most consistent and fun books to read on the stands. It’s even earning its $3.99 price tag with a solid back-up strip. This month begins a new character named the Barbary Ghost (cheap pun realized as soon as I typed it out). It’s great stuff and well worth reading.

Spaceman #3 Writer: Brian Azzarello Artist: Eduardo Risso: Spaceman continues to be a bizarre sci-fi adventure. Risso’s characters usually look the same, and since they are all monster creatures, that actually works for once.

Kick-Ass 2 #6 Writer: Mark Millar Artist: John Romita Jr.: Kick-Ass is finally losing me. It was fun when it was an average comic with extreme moments, but now it feels like Millar is just pushing it because he can. It’s starting to not be worth it anymore.

Justice League Dark #4 Writer: Peter Milligan Artist: Mikel Janin: The first storyline is about to come to an end, and I’m still not exactly sure what the team is supposed to be. It’s a fun creepy comic and we all knew Milligan knew how to do dark, so it’s exactly the form you’d expect. 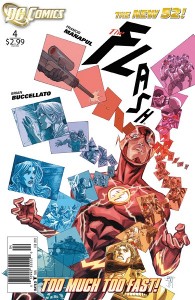 The Flash #4 Writer/Artist: Francis Manapul & Brian Buccellato: You can see how J.H. Williams III has worked to make Manapul better. His layouts are clearly rubbing off on his style, and the choices are just fantastic. Each page is fun to look at, and the story is holding up well.

Aquaman #4 Writer: Geoff Johns Artist: Ivan Reis: Aquaman is a bad ass and don’t you forget it! He kills a bunch of people, and murders an entire species. Then he gets a dog. This book is… odd. To say the least. 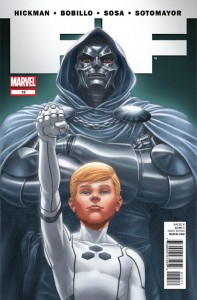 Batman: The Dark Knight #4 Writer: Paul Jenkins Artist: David Finch: It’s like Batman the Dark Knight and Voodoo have a competition each week for the worst comic. This book wins the week because of the horrible interior monologue that leads to the villain revelation. It was just terrible.

FF #13 Writer: Jonathan Hickman Artist: Juan Bobillo: I was ready to go off on how Bobillo is not nearly as good as Epting on Fantastic Four, but then he hit the end of the book. There was something about the Hickman twist that made this absolutely perfect. I could get over Bobillo’s squishy faces to make it work. Good stuff.