Happy New Year! I gotta go start a job, but I promise I’ll get these done first, so let’s do this!

No joke, the first story of this issue of Strange Adventures involves living oil trying to take over the world. Somehow, these creatures can start fires and not burn out, and it doesn’t make any sense.  It all ends up being a giant ad for someday getting to Mars. No, I’m not kidding. The next story is kinda like Groundhog Day, but the real draw is the Atomic Knights appearance. I don’t know what exactly the big deal is, but they are a bunch of dudes who fight after the Atomic War of 1986 to provide law and order to a desolate wasteland. It’s Mad Max in knight’s armor. Now I understand the appeal of it.  They fight a giant salt creature. I don’t need to tell you any more than that, do I? More info can be found HERE

The closest you’re going to get to a modern version of Strange Adventures is the My Greatest Adventure mini-series, and even that is still mostly superheroes. It does have a Robot Man story that works like a sci-fi story, so maybe that will quench your appetite. 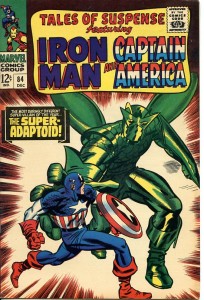 I believe I’ve said this before, but Stan Lee writes best when he only does it in 8-page stories at a time. The first story is the usual Iron Man, except that it doesn’t actually have Tony Stark in the suit at all. Stark has a heart attack and is basically incapacitated for most of the story. Long story short? It’s Mandarin’s fault and it’s to be continued. The Captain America story is actually much more interesting. It’s less whining, more straight-up fighting the Super-Adaptoid. Super-Adaptoid uses all the other Avengers to steal some powers and basically pummels on Cap for the whole story. Cap is left to drown in a river, but c’mon, we all know he’s not dead. Or is he? No seriously, they don’t have the guts to kill him that early. That comes later… More info can be found HERE

Iron Man is obviously most prominent in his self-titled series. He’s also a member of the Avengers. Captain America has two different books, the modern-day Cap title and the flashback Bucky and Captain America. He’s also tied into Avengers. So check those out! 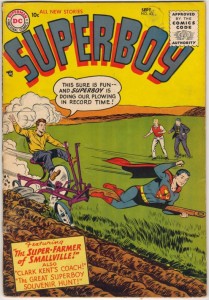 Somebody stole Superboy’s Super Wrench! That is not a joke, that’s how the story really starts, and it just gets crazier from there. Everybody starts stealing items from Superboy to keep as collectibles. Yes, everybody in Smallville is a comic book guy. In the second story, Superboy is a farmer. He helps a cranky old farmer bond with boys and the whole thing has a very “Sandusky” feel to it, if you know what I mean… In the final story, Superboy is basically acting as the Make-a-Wish foundation, but that leads him to some trouble with his secret identity. It’s all very traditional Silver Age superhero stuff, and everything wraps up in a nice little bow every eight pages. This is the kinda stuff that our Supreme Owner absolutely loves, but for me, I’ll just say meh. More info can be found HERE

Superboy is still around, with a self-titled series and joining with the Teen Titans. Now is the time to get up on his story, as we’re only four issues deep on each, and they tie together. Just do it!

And that’s the week! Go! Be merry! Enjoy your New Year!

This entry was posted in Reviews and tagged Strange Adventures, Superboy, Tales of Suspense. Bookmark the permalink.