The Latest and (Mostly) Greatest #38 by Dan!

Oh boy. Amidst the chaos that is graduation I’m still droppin’ reviews like it’s nobody’s business. Let’s do this! 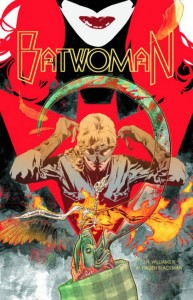 Don’t get me wrong, I love this book. It is without a doubt the best looking book of the new DC 52. It’s a delight to just look at every single page and analyze what exactly is happening. Williams varies his style by the page, and every one seems like a new invention. However, I really miss Greg Rucka. The story itself is just falling flat with me. It’s not that it’s bad, it’s just not very important. I believe that this chick used to be Flamebird, and that’s supposed to make me care in some way, but I just don’t get it. I love the use of Chase and her shadow organization, but the main plot revolving around the new girl just isn’t quite clicking with me, and I hope that changes soon. 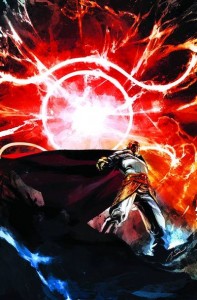 Wow! Talk about high concept! It’s not every day you have the exact same script page repeat itself three times to show the way that, regardless of the type of society, the outcome is the same, but here you go. Hickman is at his best when he’s doing high-concept oddities (check his old Image work like Transhuman or The Nightly News for more of that), and this is right up the alley of exactly what you should be looking for. It’s the only comic that has Isaac Newton as a betrayer of all time and space, so how can you possibly go wrong with that? It leaves me wondering what’s going to happen next with every issue, and that’s a damn good thing. 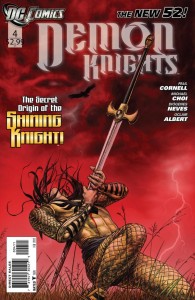 This issue contains an origin of sorts of the chick Shining Knight from Grant Morrison’s 7 soldiers run, and it’s… interesting. There’s a lot of rebirth, Holy Grail and Merlin stuff in it, and I’m worried about this book getting bogged down with exposition. This was a welcome reprieve after three issues of dinosaurs, violence and everything to the extreme, but I hope this kind of issue doesn’t come around that often. I’m still completely digging this book, it’s absurd for absurdities sake, and there’s nothing wrong with that. Cornell has created a team that came together for a logical reason, and puts them on their big quest. Also a pretty solid cliffhanger makes you want to come back next issue. 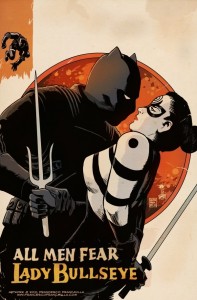 I love this book, so obviously it’s being cancelled. Liss has had a consistently fantastic run, with a logically thought out plot for how Black Panther would survive in Hell’s Kitchen. One main problem I’ve had is the art. Francesco Francavilla provides the cover, which is freaking beautiful, but hasn’t done the inner art for several issues. The art now is OK, but when compared to what we’ve seen before from Francavilla, there’s nothing you can do. I’m a little bummed that, especially with this ending so soon, Francesco couldn’t at least do some of the interior pages. It’s still a fun read, but hampered by what could have been… 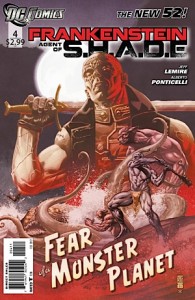 This book has the exact opposite problem from Demon Knights. It’s been three issues of exposition-heavy madness and just now is getting into the big fight stuff. And oh what Big Fight Stuff it is!  The team is off on separate sides of “Monster Planet”, beating the living crap out of different types of creatures, and then basically opening up a boss level where they kill the big creature that runs the land. This includes ramming out its knees while stabbing out its eye with a gun people, so what’s not to love? This book has been high octane fun that just keeps ramping up every issue. It reminds me of Butcher Baker Righteous Maker in its absurdity, and I look forward to every issue. 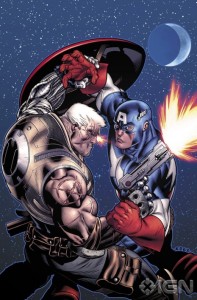 Every time a Loeb-McGuiness joint hits the stands it feels like Christmas for me. If Christmas involved giggling at… godawful comics! Because this comic is just a mess. Attempts to kill The Falcon mixed with trigger-happy Captain America and unclear motives by Cable make this crap pile so hilariously terrible. Solicits for the next issue make this look like it’s just going to be Cable shooting Avengers in the head piled up in the puffy art that we call Ed McGuiness. I love everything about it just because I hate it so much. It’s quite the dichotomy, and it’s exactly how I expect to feel when reading a Jeph Loeb book. 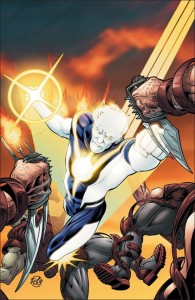 The Strain #1 Writer: David Lapham Artist: Mike Huddleston: It’s got Huddleston art, so I had to check it out, and it’s as crazy a script as Lapham can provide. It’s very meh, but seems like it has potential and only has a $1 price tag.

The Shade #3 Writer: James Robinson Artist: Cully Hamner: God this is so much better than Robinson’s JLA mess. It’s such a good book, and a good representation of Robinson when he was in his prime with Starman. So, so good.

Green Lantern #4 Writer: Geoff Johns Artist: Doug Mahnke: I have nothing else to say about this title. If you like it you like it, and you’re right. So there ya go.