All right folks, we’re now in a post-graduate world for me. So let’s see how much that edjumacation I got really pays off. Let’s do this! 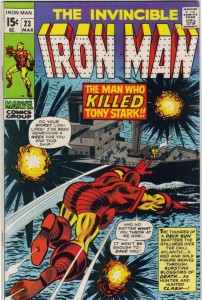 All right, I’ll admit it, I laughed at how this issue ended up. A random lady that I’m completely unfamiliar with tries to get Tony Stark to help her. She’s part of some seedy organization and they’re out to kill her, so they hired a mercenary named… wait for it… The Mercenary to take care of her. Tony Stark and Iron Man both set up The Mercenary to engage in a fight, Iron Man loses, so the Mercenary disguises himself as Stark to trick the poor woman into trusting him. The punch line is great cause it’s so out of left field. And there’s a shocking amount of death. The art comes from George Tuska who is one of those consistent Marvel artists that put out appropriate art for the time frame. More info can be found HERE

Iron Man is obviously still around and is back off the alcohol bandwagon. After living it up drunk style in Fear Itself, you can now find him in Avengers and his self-titled series with an Invincible adjective at the beginning. 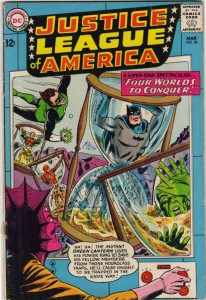 Despero is an odd little bad guy. His big plan involves turning Snapper Carr, Wonder Woman, Atom and Green Arrow old, trapping Batman, Flash, Green Lantern, Aquaman and Martian Manhunter in an hourglass, then sending them all to different worlds where they have to fight dinosaurs and insects and more. Each one has to defeat Despero in their own way. It’s… odd, to say the least. It all wraps up in a nice little bow and has everybody bonding and smiling at the end. Except for little Snapper Carr who has ruined his chance on his date with Midge. My feelings are if you’re dating a Midge, it’s probably safer to just let it go Snap. Let it go… More info can be found HERE

The Geoff Johns-Jim Lee new Justice League is about to hit it’s fourth issue. It’s not bad, and it has pretty much every character in this issue, except Martian Manhunter in Stormwatch, and Atom, who hasn’t shown up yet. Thank God we haven’t run into Snapper Carr either… 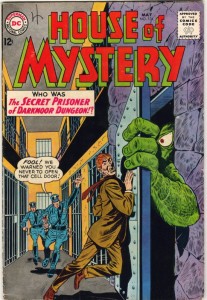 As always, this is a three story anthology, with the cover story showing up at the end. The first story is all about compromising with aliens and working together and blah blah blah (you can tell how I feel about it). The second story involves a couple of people being shrunk down to one inch tall and defeating the evil professor who shrunk them down. It’s just odd enough to work. It’s basically Honey I Shrunk the Kids (is that an old reference?). The last story is pretty much defeated by how ridiculous the cover is. We all know the payoff isn’t going to match up to the quality. They defeat the alien by throwing grapes at it. Pause for a second and think about that. They. Threw. Grapes. At. It. More info can be found HERE

There isn’t really a House of Mystery that works like these ones used to. There is a House of Mystery series, and it’s fun, but it’s more based off of the series with Cain and Abel that came later. Check out the one-shot The Unexpected from about a month ago for something more like this.

And that’s it! I’m gunna go sleep for like 80 hours. Goodnight!

This entry was posted in Reviews and tagged House of Mystery, Iron Man, Justice League of America. Bookmark the permalink.