The Latest and (Mostly) Greatest #35 by Dan

Oh no! Bet you didn’t expect me back so soon. Outside circumstances are giving you a double dose of Dan two weeks in a row, so let’s do this! 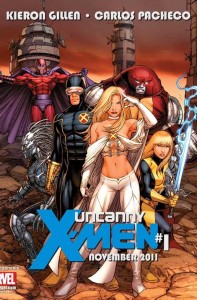 Uncanny X-men #1 Writer: Kieron Gillen Artist: Carlos Pacheco: This is what you should be doing with the X book. It’s not some wacky-art tour like Wolverine was, it’s a fair intro to the characters that has a big ol’ bad guy to fight. Very good stuff.

Shame Itself #1: Writer/Artist: Various: There’s a lot to like about this comedy anthology one-shot. It’s fun stuff that’s very self-criticizing. It’s got a writer from the Daily Show contributing and the usual indie types. Fun, to say the least.

The Goon #36 Writer/Artist: Eric Powell: With a cameo by Roxi Dlite (the burlesque star who I’ve never heard of), this is another super fun comic. If you like the Goon, you’ll continue to like this.

Fear Itself 7.1 Writer: Ed Brubaker Artist: Butch Guice: Spoiler warning, the big Fear Itself death is already completely undone, and that’s hilarious. This is a set-up for the next chapter in Brubaker’s Winter Soldier saga, and it’s necessary for fans of his run. It’s stupid that it happened here, but whatever. Just buy it, it’s only 2.99!

The Boys #60 Writer: Garth Ennis Artist: Russ Braun: Still awesome. That is all.

And now on to the new DC’s! This is nice because it’s stuff I haven’t had the chance to look at yet this week. New opinions are always fun, so here comes 13 of them. 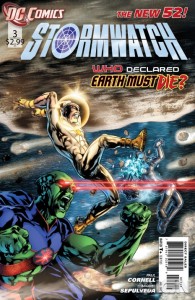 This series has consistently been getting better over the last three months. Unlike Cornell’s Demon Knights, which began awesome, this title has built and built into being one of the best titles of the DC relaunch. I’m a little disappointed that Martian Manhunter hasn’t really done anything relevant, but I can overlook that. They’ve finally built the team together (kinda) and things start to go down this issue. The very end of it shows that Cornell knows how to write Midnighter, and had me smiling about a Wildstorm book for the first time since the Garth Ennis Midnighter story (and this one had way less Hitler in it).

This title has been strong the entire time, and it looks like Snyder is the best writer doing multiple books in this relaunch (with Cornell and Jeff Lemire tying for second). He’s embracing the Alan Moore culture of those classic issues, but putting the modern spin on it. While it may be annoying to those of you that grew up with Moore’s take, this is perfectly accessible to any new readers. And don’t forget that it’s just pretty. Paquette pulling off three issues in a row on time really shows that DC is doing something new here. We’ll see if he can actually pull off six issues for the full trade, but right now it’s pretty great. 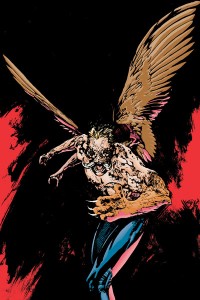 Speaking of Lemire, he’s following in the footsteps of Grant Morrison, in a character that hasn’t come close to it’s 1980’s quality. But here he is putting together a fascinating crazy story that keeps me wondering what’s coming next. Let’s get this chunk out of the way, I can’t stand Travel Foreman when he’s drawing anything that isn’t weird creatures. His normal Buddy Baker and family is jarring and painful to look at, but everything in the “red” and all the creatures he’s putting up are very nice to look at. It’s a strange dichotomy, but I think you can get passed it. 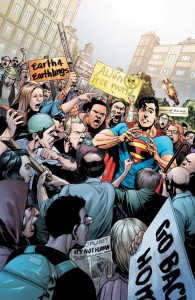 Speaking of Grant Morrison, here he is! And I think we as readers are getting screwed. Issues 2 & 3 of this have been excellent, but have been the same size as all the other $2.99 issues, but priced at $3.99. There’s supposed to be a Gene Ha back-up showing up, but he’s doing filler art in this issue, so I’m wickedly confused. The story has been fun and new, making me actually care about a Superman story for the first time in a while. I just don’t care about any of that back-up-matter fluff they’re throwing in there, and if this doesn’t get fixed soon, it’s going to be a title that you should drop. 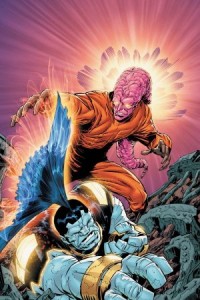 This is the Michael Bay of comics. There is almost no reason to read the incredibly thin plot, but hot damn is it pretty to look at! Giffen has denied that he’s aping Jack Kirby, but let’s be real here people. That square-jaw design and open-mouth wide-eyed reaction face isn’t a “natural progression” for any artist. But this is one helluva fun comic. I find myself analyzing every single page just to see what’s going on. It’s been three issues of OMAC showing up and blowing stuff up. In a word? Let’s call it stupid-rad! 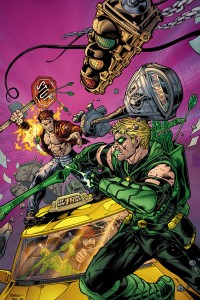 This comic is very meh in terms of plot, and that’s really dragging it down. Unlike my previous complaints about Perez’s overdrawn style, this series has looked fantastic for a story that seems inconsequential. Jurgens puts together the layouts, and Perez finishes the comic, and that’s pretty much what I’m looking for. Jurgens is one of the cleanest artists in all of comics, and Perez’s attention to detail makes this completely worthwhile. It’s too bad that it’s stuck with such a mediocre plot, but Krul is on his way out, so we’ll soon see what Ann Nocenti has to offer. 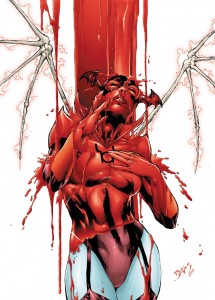 Ed Benes is the king of cheesecake, but that cover is just a step beyond. Thanks for the subtlety! This comic has the exact opposite problem of Green Arrow; Benes’ cheesecake does not work in this book about Lanterns puking blood. But the story is so off the wall that I find myself super intrigued. Bleez (the blood-stained lady to the left) gets her memories back and kinda loses the super-rage that some of the Lanterns have. Milligan is playing with interesting ideas, and I actually enjoy this comic way more than I should. 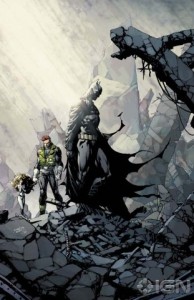 I have no connection to the “Bwha-ha-ha” era of the Justice League, but apparently this is embracing that concept and adapting it for the new times. It is almost directly in the middle of the pack because it is the most average comic book I’ve read in a long time. There’s nothing here to really keep me around, but nothing that’s driving me away. I don’t have any real emotions about it. Meh. A very, very, VERY big Meh is sent in the general direction of this comic! 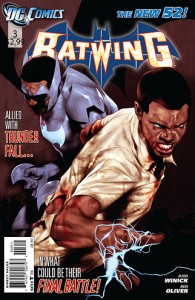 Ben Oliver doesn’t draw many backgrounds, and that’s how I feel about the art in a nutshell. Other than that, this is a comic that’s been getting better with each issue, but hasn’t stepped past mediocrity yet. A character that seems to be a blatant rip-off of Black Lightning dies in this issue, and I’m not sure why I should care. They’ve put just enough of a mystery out there to keep some readers coming back for more, but I can’t see this story lasting for very many more issues. Watch for this comic to be on the chopping block. 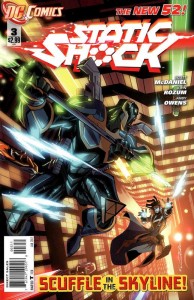 With Rozum leaving the title soon and McDaniel taking over, you have to wonder if this title is on thin ice. And again, it’s a very mediocre title. It doesn’t help me at all that McDaniel’s style has evolved so cartoony that I can barely stand it. I know I’m reading a well put together comic book about characters that I should be more invested in, but this has just never done it for me. However, to keep the copyright, I can see this continuing as the only Milestone character in a comic for a long time. I see ways it can get better, but it’s a waiting game. 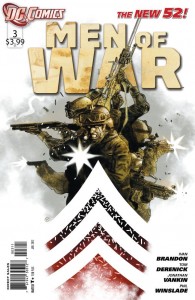 Now, this is a comic that leaves me wondering “why?” Like, why does this comic exist? Why should I care? Why did you up the price on a comic that won’t really sell? I’ll give it credit that it has more pages for the $3.99 price, but it’s about as generic of a war story as you can get. Except for the last two pages… it tries to throw you for a loop, but it doesn’t make any sense. Not worth talking about, and not really worth reading. 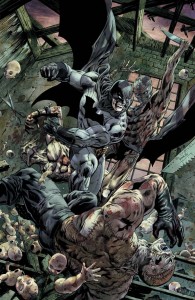 Where to start, where to start… This is not as awful as Batman: The Dark Knight, but it is pretty awful. There’s face-stealing, weird little girl plot twists, Batman just punching things in the face, and more! That sounds like a compliment from me, but it’s just too stupid. It’s not fun stupid, it’s “look at how gritty I am!” stupid. Trying way to hard to show how cool it can be, I find myself getting angry with every single page I read. But this was one of the top-selling comics of the past few months, so that shows what my opinion means to you people. But it’s not the worst… 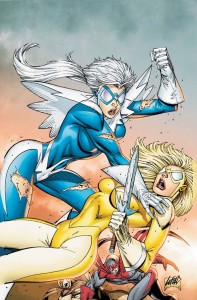 If you’re going to do a Rob Liefeld drawn book, you might as well go balls to the wall. You can’t get away with any form of subtlety when you have a guy that doesn’t even bother to draw people with ankles. This comic doesn’t go far enough for what it’s trying to accomplish. Liefeld is drawing his butt off (which isn’t good), but Gates doesn’t really let him go off. This needs to get into the absurd, make as little sense as possible, and just have a bunch of screaming, exploding, and fighting, but instead we get meaningless banter and mediocrity. And mediocre Liefeld is still the worst you can possibly imagine.