And we’re back! I have a splitting headache, but that won’t stop me. Let’s do this! 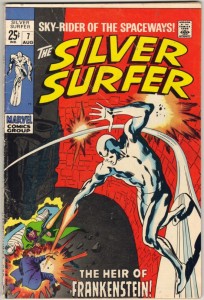 I’m not gunna lie, these Silver Surfer comics were worth their 25-cent price point. This book is thick. This story is, in a nutshell, weird. Silver Surfer meets an heir to Dr. Frankenstein who is, of course, trying to bring his own monster to life. The Dr. accidentally creates a new Silver Surfer that tortures the town, and it’s up to the normal Surfer to bring him down. John Buscema provides the art, and the only way I can describe it is… simple. It’s nice and clean, but doesn’t do anything to really blow me away. There’s also a back-up “Tales of the Watcher!” story, but I think the less said about that the better… More info can be found HERE

It’s funny, but I’m not sure what’s up with the Silver Surfer these days. A quick check on Wikipedia reminds me that he showed up for “Fear Itself: The Deep” and has been working with Galactus in “The Mighty Thor” but my lack of a memory can tell you how important those stories were… 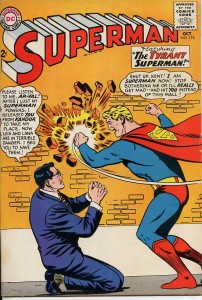 So, Superman is afraid he’s going to die when he goes to stop a meteorite from crashing into earth, so he uses Green Lantern’s power ring to test out two people from Kandor to be the new Superman (if he could fix them, why doesn’t he do that for all Kandor, but whatever). Then he, coincidentally, does lose his powers, and the new dude begins taking over! Oh no! What is Superman to do? It turns out this new Superman is a tyrant, so the “old” Superman uses the Legion of Super-Heroes to help him temporarily have powers. There’s a helluva lot going on with this comic, I haven’t even reached the Lex Luthor-Brainiac sub plot, but just know it’s there. This is a jam-packed crazy issue that’s basically everything that was right in the 1960’s. More info can be found HERE

So, funny story. Action Comics and Superman have both been rebooted, and apparently your favorite will depend on your age. The younger crowd seems to love the Grant Morrison Action Comics, whereas the older group (no offense!) loves the George Perez Superman. It’s all really a matter of taste, but neither comic is bad, so that’s cool. 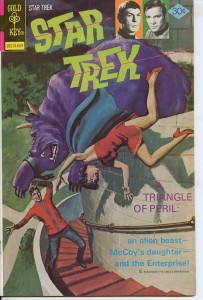 I did a double take when I saw this number! Star Trek really lasted 40 issues? Really? This comic is weird, to say the least. The crew of The Enterprise has a furlough on the Earth to help rest an injured crew member, and while there we get to meet Bones’ daughter. She is basically a glorified zookeeper who takes care of weird animals (just look at that cover…) Crazy things happen, but overall it was a pretty tame comic. Nothing too fancy. The art was like a skewed interpretation of the characters, and it was really nothing to write home about. It seems that after 40 issues, they must have been getting bored, cuz’ this is pretty sub-par stuff. More info can be found HERE

Star Trek always has a mini-series coming out, and they’re usually published by IDW. There’s currently a Legion of Super-Heroes/Star Trek crossover that’s cool, and several based on the movies and the TV shows. Just look around and find what you like!

And that’s it. This time next week should be all Phil, but who knows? Maybe I’ll get to pick up a tri-fecta of three in a row. That would be a bit ridiculous..wouldn’t it?