The Latest and (Mostly) Greatest #34 by Dan!

All right folks, here comes the last round of #2’s hitting the market. The Professor is claiming that he “doesn’t mean” to write 2,000 words about every one of these, but we all know he’s just screwing with me. On to the books! 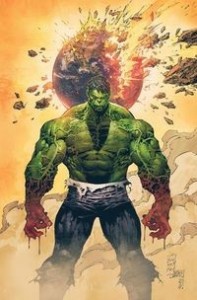 Incredible Hulk #1 Writer: Jason Aaron Artist: Marc Silvestri: I’m not a Hulk fan, I’m not a Silvestri fan, and Aaron is hit-or-miss. Here? It’s a miss. There’s nothing to draw me in, nothing fun and it’s not an issue I thought was worth anything at all.

Wolverine and the X-men #1 Writer: Jason Aaron Artist: Chris Bachalo: You can’t trick me into like Bachalo just because Greg Land draws the other X-book. This Aaron script is much better than Hulk, but the title itself doesn’t really draw me in either. Oh well. Two new Marvel misses this week.

Stitched #1 Writer: Garth Ennis Artist: Mike Wolfer: This one is WAY more interesting, and it’s brought to you by Avatar. Ennis is at his peak doing war stories, and this is as twisted as they come. Add in Wolfer, known for the Gravel series, and you get yourself a well-put together comic. 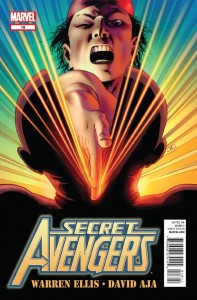 Captain America and Bucky #623 Writer: Ed Brubaker Artist: Chris Samnee: The story turns a bit darker with concentration camps, but the WWII Bucky story comes to a close with this issue. Up next is the Winter Soldier story, which should be very very good.

Daredevil #5 Writer: Mark Waid Artist: Marcos Martin: This is the best book Marvel is publishing right now. Add Marcos Martin in to do the actual art and it’s even better.

Butcher Baker The Righteous Maker #7 Writer: Joe Casey Artist: Mike Huddleston: This is without a doubt the most bizarre book’s on the stands right now and I love it. Huddleston puts this book over the top with his out of control designs. It’s lovely. 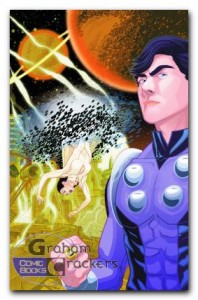 MUCH BETTER! Finally a Legion story that I can completely understand. I feel like this should have come out instead of Legion Lost. It’s seriously a straightforward retelling of what’s up with the Legion and “how it came to be.” The Legion still isn’t quite my thing, but at least there’s an accessible comic out there for people who want to know more. Finally! 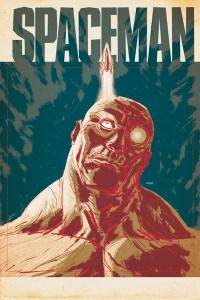 The 100 Bullets team comes together again for a new Vertigo series, and hoo-boy, is it a strange one. I read this the whole time thinking “Alan’s going to hate the dialogue,” but I enjoyed the crap out of it. It’s really well made stuff, and once you get used to the future-speak you find a good old fashioned sci-fi mystery. Highly recommended for those of you looking for something in the vein of old-school Vertigo (Transmetropolitan type), and it’s definitely good stuff. 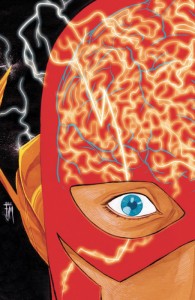 Manapul’s art style is very much an issue of taste. You’re either going to love this or hate this, and I choose to love this. He is a cartoony, easily-accessible version of JH Williams III, and the story isn’t terrible either. If you’re gunna have Flash fight one person, why not have him be a ton of clones so he has to adapt. This issue also expands on the idea of the Flash using his mind as fast as his body. That gets Manapul and Buccellato the chance to do even more crazy styles, and it’s just a fun comic book. Don’t blame me if you don’t like the art. That’s your own fault. 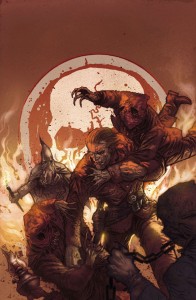 This issue is worth noting as it attempts to have a back-up strip to enhance your comic reading experience. The back-up is an El Diablo story drawn by Bernet, which means it’s going to be beautiful and perfect. That’s exactly what this issue is. I have a feeling that a lot of people aren’t reading this book, and that’s a damn shame because it’s the best western that DC can possibly offer, and probably one of the best western books to have been offered in the last 10 years. Absolutely worth your time, and the back-up makes the extra dollar not that much of a big deal. 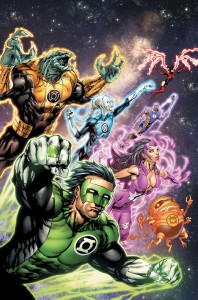 Let’s get this out of the way right now, I absolutely adore this concept. That’s why it’s ranked so high on my list. I don’t like the Kirkham art, but that’s also limited by the fact that another artist has to help him finish this one up. The basic idea is that one ring from each Corps has suddenly decided to attach itself to Kyle Rayner. This has led to a representative from each corp coming to find out what’s going on, and essentially beat each other up. In the meantime, Bedard advances the plot about the Guardians, and the whole thing just feels fresh and new. Love it. 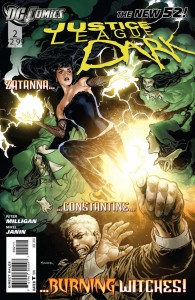 Justice League Dark is a guilty pleasure for me. I knew no matter what, I was going to like it, but it’s exceeded my expectations. Milligan has found a fairly reasonable way to get all these mythical beings together, and it feels like pieces are in motion, and that there is an actual plan in place. I find myself actually wondering what’s going to happen next. The art has been causing problems for some people, but I don’t mind it. It’s not the best I’ve ever seen, but it’s also not distracting from the overall. I’m enjoying this book, and if you’re a fan of the darker characters in the DCU, you will too. 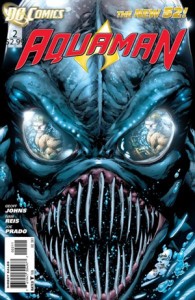 Reis saves this comic from mediocrity. The concept (crazy fish people that Aquaman can’t talk to start murdering the %#!t out of innocent civilians) is a little too simple for my taste, but the creepy f-ing creatures that Reis has created make this book a must-see. You can’t stop looking at these evil freaking creatures (Look at that cover, no seriously, LOOK AT IT), and even the way Aquaman and Mera handle them is equally exciting to look at. It’s a well-drawn book with a mediocre concept. I’ll stick around for a while because I trust Johns, but it’s understandable if you don’t. 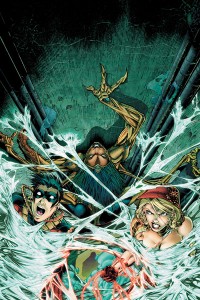 This isn’t bad. Which is saying a lot for a guy that’s never really been a fan of the Teen Titans. Booth is the kind of artist that you might get sick of really quickly, but I think Rapmund’s inking is helping him go miles beyond his previous work. Lobdell has an uncanny knack for keeping the tone of this series surprisingly light. It feels a bit like modernized Chris Claremont X-men in that it balances the drama of a bunch of youngsters with the bizarre of the superhero world. I also totally forgot the person they were fighting was going to do what she did, so the little twist as to where it’s going isn’t bad either. 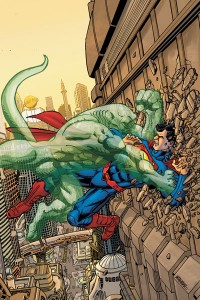 This isn’t ranked lower because I appreciate quality. The fight scene was pretty cool, with Supes having to come up with a strange way to fight the villain he couldn’t see. My problem is that I just don’t care. I find Perez art to be so over-the-top that I just go numb, and that’s the exact case here. If you love reading 12 panels a page for 20 pages, then by all means, be my guest. The problems I have with modern comics is normally that they rely on the splash page more than they should, and this is the only comic where I find myself wishing there was just one! 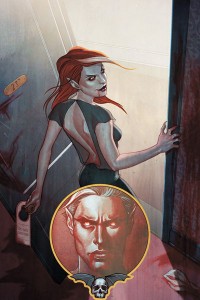 This is not like any other comic Marvel or DC put out right now, and I love the concept. Yes, it’s basically twilight (Vampires vs. Werewolves OMG!), but it’s done with subtlety people! I find myself wondering how they’re going to expand this concept to fit into the DCU, and I’ve heard Batman’s going to show up at some point, but I want to know now. It’s the kind of comic that isn’t quite telling you everything, and know you want to hear it now. Still a good set-up, just don’t drag me on for too long… 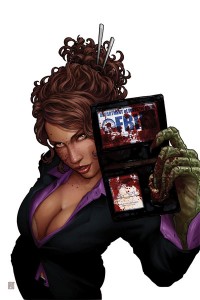 Voodoo takes a step in the right direction, in that I don’t feel like feminism is evaporating every time I turn a page. There’s still a fair amount of gratuitous sex, but nothing quite like that last issue. There’s an actual plot here folks! Voodoo doesn’t wanna be taken prisoner by the alien team hunting her. This leads her into direct conflict with the team leader, a no-holds-barred leader who keeps getting suckered by Voodoo. I’ve read worse, and that’s as close to an endorsement as this is going to get. 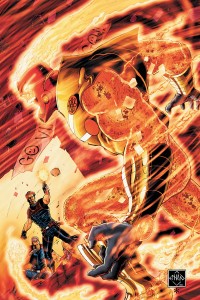 Oh this comic… It wins the award for bringing up almost no feelings in me whatsoever. I barely even remember what happened in this comic, and that’s pretty bad folks. There’s two firestorms, they come together to make another bigger one. They fight the bad guys, it’s about to get real intense, the end. I didn’t really care about Firestorm to begin with, and this comic has done nothing to change my opinion. 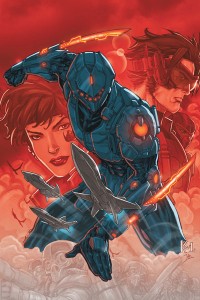 Speaking of comics that do absolutely nothing for me, here’s Blackhawks! Honestly, I can’t tell you a single characters name. I know there’s the one-armed Irish dude who just lost his arm this issue. I know there’s a chick that might be infected with something from a dude who dropped in and cut off that Irish dude’s arm. Did that sentence make any sense to you? Yeah, so if Irish dude with his arm cut off works in any way for you, then buy this comic immediately. Otherwise, Holy Meh! 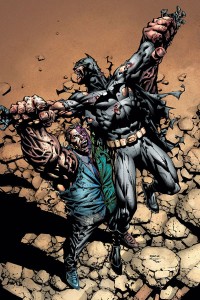 Dark Knight doesn’t take the bottom spot because at this point I feel like Jenkins and Finch are just straight-up screwing with me. I also laughed like a kid at the idea of a roided-up Ventriloquist using a cop as his new dummy. This book ignores all other Bat-continuity, doesn’t make very much sense at all, and leave the reader going “hold on, what?” more than five times per page (that might be an exaggeration). It’s just funny at this point people, and I don’t think it’s supposed to be. But it’s not the worst! This weeks honor goes to… 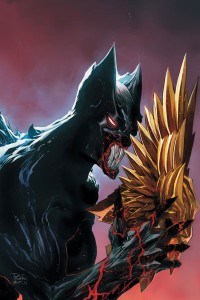 I knew at the second page that this would be the bottom of the barrel this week. Hawkman fighting a dude that’s completely on fire should be a really incredible visual, but Tan’s muddled mess of an art style takes it to a completely different time zone. Things don’t get much better from there. Daniel’s script is competent, but not much else. There’s a lot of talking, some kind of love interest, and a lot of Philip Tan not drawing eyes in any way. No seriously, he draws eyes as often as Liefeld draws ankle joints people. It’s miserable stuff, and makes me want to re-read All-Star Western just to get the taste out of my mouth.

And that’s it! After all those DC comics, I start to feel like my brain’s going to explode. But as I hit the 2,000 word mark, I know you people love every minute of this. So feel free to comment! Do you disagree? Let me know here! Don’t just heckle me at the store…