And we’re back! I’m taking a break from the bizarre-ness of the Cardinals game (we all know they’re going to lose) to bring you this new round of comics reviews. Let’s do this!

Green Lantern #40 from 1965 So this is one of the first crossovers between Earth 1 and Earth 2. It’s… interesting. This gives an entire origin to the Guardians that involves a character named Krona. They basically punished Krona for trying to figure out where they came from. Basically, they banished him from existence for trying to learn about history. The Guardians have always been a bunch of a-holes, even going all the way back to the 1960’s! I’m not quite sure how the Earth-1/ Earth-2 stuff worked, and I can honestly say I have no idea how Alan Scott got to Hal Jordan’s world. But who cares? This was a fun comic with heroes you can recognize. More info can be found HERE

Green Lantern has four(!) separate titles running right now. The obvious one is Green Lantern, which focuses on Hal Jordan and Sinestro. There’s New Guardians if you’re looking for Kyle Rayner, Green Lantern Corps for John Stewart and Guy Gardner, and Red Lanterns if you like weird stuff. Alan Scott is off the table right now, but a JSA comic is coming down the pipeline, so he’ll be back soon. 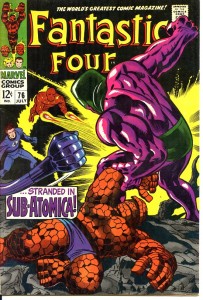 Fantastic Four #76 from 1968 Well, the entire first section of this book involves “shrinkage” and since I”m a 10-year-old, I couldn’t stop laughing at that. Silver Surfer is stuck in what is essentially the microverse, but does he really want to leave? At first the answer is no, then the FF get attacked by some weird creature created by the Psycho-Man (love that guy), but the FF manage to stop him. However, Silver Surfer has no intention of leaving that universe, so how are the Fantastic Four going to be able to save the world? Well that’s going to be answered in the next issue! So yeah, as always with the FF, it’s a continuing story in the “Mighty Marvel Manner.” More info can be found HERE

The Fantastic Four are still around, but they replaced a Human Torch with a Spider-Man. There’s the FF title, and Fantastic Four is coming back for the big 600th issue event. Check it out, there will be about 47 different covers to choose from…

G.I. Joe #2 from 1982 Much like Transformers, G.I. Joe is just out of my age group. I know that this is a well made comic from a long running critically acclaimed comic series, but I just find myself not caring. Didn’t Larry Hama write almost every single issue of this title? Because that’s pretty cool. This issue is all about the Joe team trying to stop Cobra in the snow. The Joes are literally in the snow to go after one operative, so to me that feels like a bit of a waste of time, but again, this isn’t my style. To me it’s just a doofy 80’s comic that I’m not even going to remember that I’ve read. More info can be found HERE

G.I. Joe is still being written by Larry Hama, albeit it’s now published by IDW. From what I’ve heard, it’s still the same quality. If you’re looking for the back issues, we have a fair amount, or there are trade collections of at least the first 50. And that’s the week! I’m going back to football! “The” Dan Jacka