The Latest and (Mostly) Greatest #26

All right folks, this one’s a rush, so I apologize in advance.  Gotta get this going before I bail for the north.  Have a happy 4th of July and don’t forget to check out our BIG SALE on Monday! (shameless plug)

Oh hell yes! The Goon!  Literally the best thing you’ve probably never read is back and not missing a beat.  Powell is without a doubt the King of painted art, and his monsters rival some of the greats from the past.  It’s the greatest comic you’ve probably never read, but seriously, it’s worth checking out.  This issue, the Goon takes care of some of those sissy vampires you may have heard about and then has to fight a pre-teen monster.  There’s a reason she shows up on a leash.  There’s a lot of trades of old Goon stuff that’s absolutely worth getting.  Coming up next issue, Evan Dorkin will be writing.  That should be strange, but if his Beasts of Burden is any sign, we could be looking at an even Better comic, which is really saying something.

So this has actually been a “Detective” comic since Snyder took over, which is something the book has seriously lacked for the last few years.  Snyder has weaved together a pretty crazy little story that almost comes to a head here.  Things wrap up quite nicely with the former mob bosses daughter (there’s NO way she’s redeemable, this is Gotham City folks…), and everything is about to come to a head with Commissioner Gordon’s son.  Next issue will have art by Francesco Francavilla so it’s worth checking out, but Jock’s style in these issues has actually been pretty freaking sweet.  Heads up that Snyder will move to Batman during the reboot, losing Francavilla and Jock in favor of Greg Capullo.  That worries me, but we’ll see… 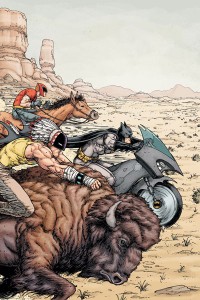 Christ Burnham has brought a new level of quality to this book.  He fills the gap left by Frank Quitely as best as anyone can.  He has the ability to pull off that cartoony style that makes these books work.  Too often Morrison talks himself into confusion, and he needs that art style to help clear things up.  This issue is out on the reservation with Man-of-Bats and his son.  Leviathan is becoming some huge underground baddie that I can’t wait to learn more about.  Batman builds his group almost parallel to the Leviathan group.  Things are going to come to a head soon, and I will absolutely be watching the whole ride. 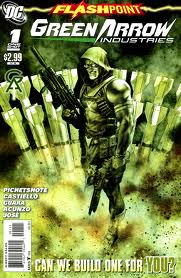 This is the first week where Flashpoint didn’t really work for me.  The best was Green Arrow, but this one shot really did nothing to affect any of the storyline.  Hal Jordan connected to several weeks passed the Abin Sur mini-series, and I’m not sure that’s a good thing.  Project Superman was a pretty big ripoff on Irredeemable, with a twist I’m not sure I care for.  And the Canterbury Cricket was just a complete mess.  Well, they can’t all be winners folks, it’s just unfortunate that they all hit their off points on the same week. 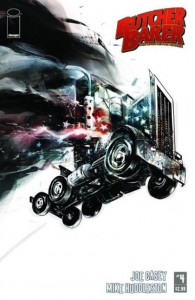 I love this book.  It doesn’t even bother to waste it’s time on subtlety, simplicity, or real character development.  It’s basically just a giant kick in the nards of action and plot and life.  Casey and Huddleston have created a book that doesn’t even bother to apologize for itself and just continues to ramp up and up.  I feel like something’s going to happen with everything Butcher does (and that includes the people he’s killing!), but I don’t even want to try to guess.  Why mess with perfection?  Just buckle up and hang on folks.  From what I can tell, it’s totally worth it.

And that’s it!  “Fresh Eyes” will be a little late this week. Later on Sunday than usual, but other than that, we’re still on schedule!

This entry was posted in Reviews and tagged Batman, Butcher Baker, Green Arrow, The Goon. Bookmark the permalink.