All right folks, brought to you live (with slight tape delay) from Brookbank Canyon Ranch in northeast Arizona, I give you my reviews!  I’m taking a step away from the ranch life to give you folks exactly what you want.  Let’s do this! 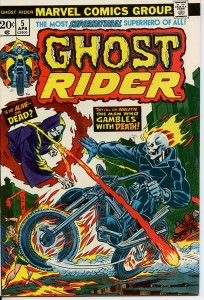 There’s nothing quite like reading the phrase “swears to you on the name of the almighty Satan” when you’re surrounded by strict conservative religious family members. But that’s what you get when you’re dealing with Ghost Rider. Johnny Storm has to save his love interest (with old school Marvel, names aren’t that important), from the evil Roulette and his wheel of death. For a 70s comic, this sure reads like a 1960’s Silver Age in terms of craziness. The real problem is that the art is at the same level of the 1940’s Golden Age. It’s Jim Mooney, and I’m not sure what that means, but it leads to a level of mediocrity that kinda affects the whole thing. The story itself is just as crazy as you want a Ghost Rider story to be, but the art (including someone kissing Ghost Rider… WHAT?) really brings it down. It’s the kinda book that has so much potential for ridiculous antics, but this one doesn’t quite pull it off.  More info can be found HERE

Ghost Rider is on his way back. After a really strange run written by Daniel Way, then written by Rick Remender, there’s a new series on the horizon. The “0” issue is on the stands now.

The Fantastic Four is a strange beast. Having always been around as the flagship title for Marvel, it’s currently more than likely the most underappreciated of all the superheroes I know. But I don’t think that was the case back in the day.  Big things were happening, and that’s evidenced in this issue. Not only are the FF preparing for a big battle with Doctor Doom, who now has the power of the Silver Surfer, but also the Inhumans decide to the destroy their home base simply with a word from Black Bolt. This may actually have one of my favorite Kirby-drawn moments of all time. It’s only three panels, but it shows the ability of the King better than anything I’ve ever seen. So much happens in this issue, that my descriptions wouldn’t even begin to do it justice.  Seriously, just go check it out.

The Fantastic Four numbering came to an end several months ago.  Now, with Johnny Storm dead, we have the title FF, which has used both the members of the Fantastic Four and Dr. Doom. As for the Inhumans, I think Black Bolt is gone because of Secret Invasion, otherwise they haven’t shown up much lately.

Oh, the phase of Spider-Man where Aunt May was with Doc Ock… If you think the Fantastic Four issue I just covered was convoluted, you ain’t seen nothing yet! The thing about Spider-Man from the 1970’s is that they always try to cram as much info in as possible.  This issue alone features Doc Ock & Aunt May, Norman and Harry Osborns secret troubles; the Hulk arriving in New York City, Peter Parker getting more money from the Bugle… the list goes on and on. With art from John Romita Sr, readers also get to experience some of the clearest and most elegant pictures you’ll find in any old comic book.  I’m definitely not a big Hulk fan, but this Spidey crossover is just the right amount.  Fun stuff.  More info can be found HERE.

Spidey, of course is still around.  Find him in Amazing Spider-Man, FF, New Avengers, and I’m sure, plenty of mini-series.  The Hulk is also still doing his “thing” (no pun intended), but now with more red Hulks.  Both of those can be found right at your friendly neighborhood All About Books and Comics.

And that’s it! I survived, you survived, and everybody wins!  Don’t forget to check out the sale we have this Monday July 4th, and feel free to yell at me for my opinions about comics!