The Latest and (Mostly) Greatest #22

So it’s almost Free Comic Book Day.  Are you prepared? Are you SURE?  Well, here’s some reviews to settle you down before the brouhaha. 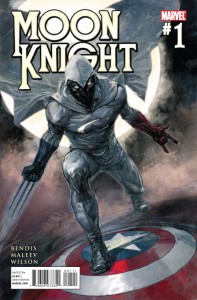 So here’s the deal.  I saw this and went “Wow! Maleev actually isn’t photo-referencing! This looks hand-drawn, but it doesn’t look quite right.”  Then a very aware customer (I’m lookin’ at you Jeff) says “You know, it’s a tribute style to Bill Sienkiewicz” and my mind was blown.  This book is absolutely great.  And the new plot (Moon Knight has the multiple personalities, but they’re some classic Marvel Superheroes) means that everything we’ve seen in this issue might be a total fake-out.  There’s so much potential for this series to be strong in it’s “what’s real, what’s not” idea, that I’m completely drawn-in.  It’s the most thinking I’ve done while reading a comic in a while, and it’s way better than the last time I read Moon Knight… 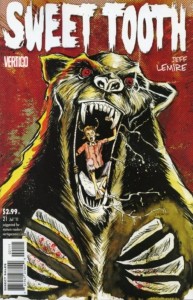 Hey! Sweet Tooth is still awesome.  Have I mentioned that lately?  I’m pretty sure I have.  This is another quick tale in the style of “Crisis on Infinte Earths”, except this time with a twist.  The entire top story is completely sileny, and it’s basically just a giant fight with a bear.  You heard me, super bear fight.  The bottom is an update on the status of the ladies in the book.  Overall, Sweet Tooth is a story that almost doesn’t need a resolution.  It can keep going and going, and telling tales of different societies that they keep running into.  This is very much a “worry about the journey, not the destination” type of story, and I wonder how much Lemire really has planned out here.  I wouldn’t mind if this was an issue by issue thing like David Lynch with old Twin Peaks episodes and he’s just making it up as he goes along.  Winner. 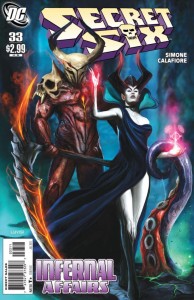 Speaking of comics that are still pretty rad, here’s DC’s Secret Six.  Gail Simone writes a mean comic about hell, and usually when comics come out about DC’s version of Hell (see Reign in Hell) they become way too complicated.  This issue toes a fine line, finished up a story about the Secret Six and their “Get Out of Hell Free Card”.  It will be interesting to see where the comic goes after this, and I’m hoping it doesn’t even tie into anything else.  Calafiore provides the usual fun style that he’s known for, and has one of the best montages I’ve ever seen.  It’s a series of the Six dealing with all their fears, and the simplicity of the punchlines is completely elegant.  It’s a very very good comic that never lets up. 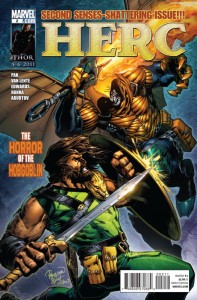 Are you guys tired of me repeating myself?  Well too bad, cuz’ here we go again.  Much like last month’s issue, Herc is a high-paced action adventure about a slightly above average dude dealing with all the problems that the streets of Brooklyn has to offer.  It’s weird, because it’s basically Daredevil meets the Gods, and it’s a very, very good book.  Add in the fact that the Hobgoblin and the Kingpin have shown up to screw with things, and you have yourself a good ol’ fashioned mystery.  You think after almost 50 years of existence, Marvel heroes would know not to take the Kingpin completely straight.  I’m thinking there might be ulterior motives, but that’s just because I’ve read comics, and lots of them. 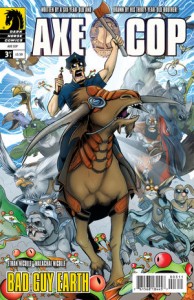 So with another huge bang, Axe Cop comes to an end.  I can’t even put into words just how rad this entire comic is.  A surprising amount of coherent plot coming from a 6-year-old mixed with the “who cares about basic physics?” attitude of a 6-year-old makes this one of the best 3 part minis to come out in a long time.  We’ve got ourselves an evil bear getting shot in the face and becoming a good guy bear cop; a bad guy axe cop team acting as doppelgangers to the good guys.  Then they all mix together and have a giant battle royale.  Don’t worry though, everybody lives happily ever after.  It is written by a 6-year-old boy after all.  Ya can’t expect it to end with death and destruction, can you?

The Boys #54 Writer: Garth Ennis Artist: John McCrea: Not the same without Robertson, and McCrea isn’t quite working right on this title.  I want Robertson back dammit!

Uncanny X-Force #9 Writer: Rick Remender Artist: Billy Tan: I still don’t like Billy Tan, but this one-shot issue is just as good as the last one.  Simple and elegant, quality stuff.

Wolverine: The Best There is #6 Writer: Charlie Huston Artist: Juan Jose Ryp: A very lackluster ending, but it is so nice to look at that I almost can’t say no to it…  Is this an ongoing or a mini?  I honestly don’t know.

The super death of three DC titles all hit on the same week, and every single one of them is not very good.  JSA has had its problems, and the story basically falls apart and ends.  Freedom Fighters has the same problem, with this third incarnation just wrapping itself up without actually wrapping anything.  Doom Patrol is the best of the lot, but that’s like lipstick on a pig.  Giffen does his usual uppity self-aware comics work, and that makes it a really good ending.  Overall, it’s a sad day, but less money to be wasted on mediocrity, go buy more Batman comics!