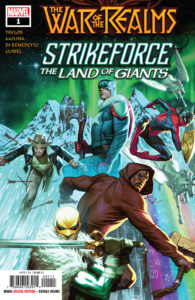 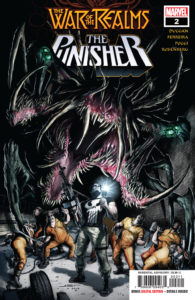 War of the Realms, the Norse-mythology invasion of Marvel Earth, has five tie-ins this week, of varying genres. Strikeforce: The Land of the Giants has the benefit of being 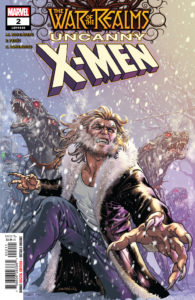 a one-shot complete story, about a team a lot like the Bendis-era New Avengers (Spider-Man, Wolverine, Luke Cage, Iron Fist and Captain America) on a rescue-Thor mission; it does its job of expanding on a key sequence of the overall story, and if you’re only going to buy one of these this week, it’s the one (it’s also a lead-in to the Spider-Man and the League of Realms mini-series, which started last week).  The Punisher and Uncanny X-Men tie-ins read like regular issues of those comics, and if you’re reading the main titles you probably want them too.  Punisher sees Frank corralling a band of prisoners to help him shepherd refugee 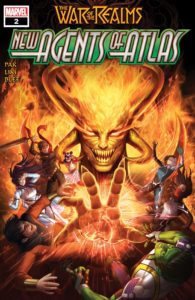 hospital patients through the Lincoln Tunnel into the relative safety of New Jersey, and its Dirty Dozen Battles an Alien Invasion set-up is fast-paced and war-movie entertaining.  Uncanny X-Men is by that group’s current writer/artist team, Matthew Rosenberg and Pere Perez, and sees their Cyclops/Wolverine-led, Age of X-Man-depleted version defending Manhattan from frost giants and dealing with a turncoat Sabertooth (it’s even legacy-number counted as part of the main title, so regular readers will really want it…).  New Agents of Atlas is Greg Pak using characters from his Totally Awesome 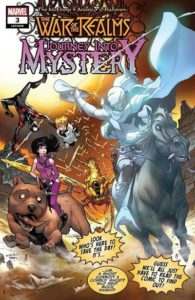 Hulk run — former S.H.I.E.L.D. agent Jimmy Woo recruiting Amadeus Cho, plus Shang-Chi, Ms. Marvel and Silk, into an all-Asian-ancestry international-aid group — to fight Norse fire demons in South Korea; it’s good continuity-rich, straight-ahead superhero battling, as you’d expect from Pak.  Journey Into Mystery is a road-caper movie involving Balder using the Kate Bishop Hawkeye, the Miles Morales Spider-Man, Thor’s dog Thori and a couple of others to get Odin’s newborn daughter away from the invasion; it’s the most lighthearted of the bunch, and fans of the Marvel western heroes, including the original Ghost Rider and the Rawhide Kid, should appreciate their guest status here. 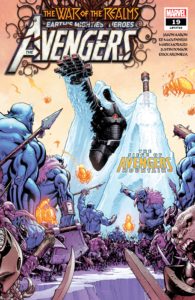 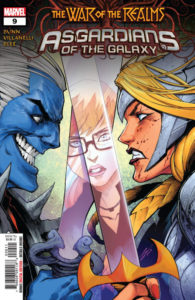 Four other Marvel comics this week have regular issues that tie into War of the Realms, and manage to do it organically; Avengers #19 is almost a chapter of the main story, since it’s by the same writer, Jason Aaron, and

involves the defense of Avengers Mountain, the team’s current headquarters (and the body of a long-dead, and enormous, Celestial).  Asgardians of the Galaxy has a similar natural fit, especially since one of its group was killed prominently in War of the Realms itself; this looks at the ramifications, gives the character’s partner some resolution and a way forward, and sets up for a big fight involving title Asgardians Angela, Scourge the Executioner, and the turncoat Queen of Heven.  Venom has 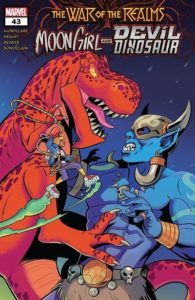 Eddie Brock, currently without his regular symbiote, getting an Asgardian-magic substitute and using it to fight a powered-up Jack O’Lantern, who’s yet another Earth-traitor; it’s the kind of easily-accessible, crowd-pleasing tale you’d expect from old pro Cullen Bunn.  Moon Girl and Devil Dinosaur, like last week’s Unbeatable Squirrel Girl, gets the award for most surprisingly successful tie-in, and for the same reason: it lets in the crossover invasion, but on its own terms, morphing it to fit its gentler, cartoonier and more tongue-in-cheek style, and emerges with its normal charm and humor intact. 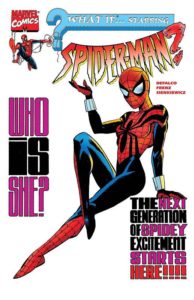 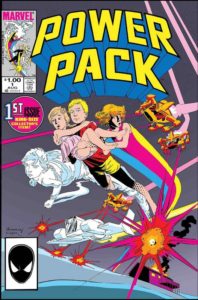 Marvel’s got a trio of what used to be called the “True Believer” $1 reprints this week.  The introduction of Spider-Girl, from 1998’s What If? #105, launched over a decade of stories involving the alternate timeline where a married Peter Parker and Mary Jane had a daughter, May, who carried on the family costumed tradition; this origin, by 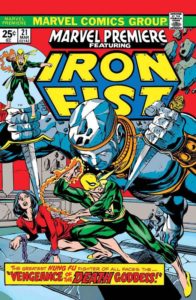 May’s longstanding creative team of Tom Defalco and Ron Frenz, shows the affectionate characterization and clever updating that made it such a cult favorite.  Power Pack, from 1984, was a wonderful and charming kids’ comic about four siblings who get powers from the space-horse Kymellians to fight the villainous reptilian Snarks, and who bicker, bond and try to hide their adventures from their clueless parents; as with Spider-Girl, everything that made it so fondly- 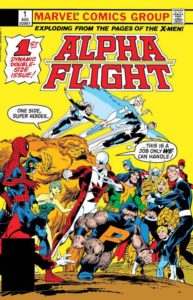 remembered and fun is there in that first issue.  Iron Fist got picked because it’s the first appearance of Misty Knight, and is a time-capsule-perfect summary of mid-’70s Bronze Age Marvel house style, while John Byrne’s Alpha Flight #1 gets the “facsimile” treatment: a replica of the 1983 original, down to the ads and editorial matter, for $4.99 (actually, All About would sell you a decent copy of the original Alpha Flight #1 for $4.99, but today’s paper and production values show off those sharp, crystal-clear Byrne lines much better than the cheap bleed-prone paper they were using 35 years ago…). 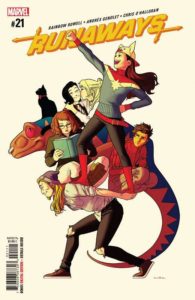 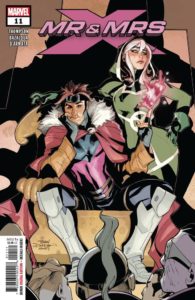 Runaways continues to be a bright YA-oriented, character- 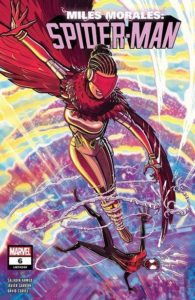 rich comic, strong on relationships and soap-opera-ish plot twists related to its diverse young powered cast;  it can go long stretches without much actual fighting, but the sleek modern look and overall writing always manage to redeem it.  Mr. and Mrs. X keeps looking at Gambit and Rogue as a married couple;  the current arc is set in New Orleans and considers the effect of the marriage on Gambit’s family and Thieves-Guild connections down there.  Kelly Thompson and Oscar Bazaldua keep the focus on the couple, ignoring any War of the Realms or Age of X-Man encumbrances, and fans of the star-crossed mutants’

longstanding relationship should appreciate them for it.  Miles Morales: Spider-Man introduces a new flying-girl hero, the Starling, who’s looking for revenge against the gangster Tombstone; the best part about the Miles stories, as always, is that Spider-Man as a teenager learning the ropes leads to lots of strong plots and characterization, in areas where the adult Peter Parker can no longer deliver.  Doctor Strange sees Doc trying to keep Galactus, who’s been exiled to the magical dimensions, from ingesting their energy and destroying the 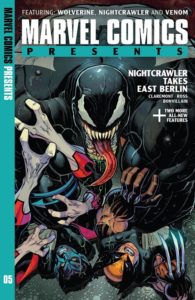 universe; he’s outmaneuvered by a very old foe, though, leading to the kind of big-concept, wide-scale cosmic consequences that writer Mark Waid has always handled so well.  That leaves Marvel Comics Presents, which offers another installment of its ongoing Wolverine serial by Charles Soule, Dio Neves and Oren Junior, plus a Nightcrawler/Kitty Pryde one-off by longtime X-Men scribe Chris Claremont, with art by Luke Ross, and a Venom story by Leah Williams and Guillermo Sanna: a good mix, and worthy of one of comics’s few anthology titles left on the stands right now.

Only two DCs of note (I know I’m a Marvel guy at heart, but honest, it wasn’t that much of a week…); Action continues Brian Michael Bendis’s “Leviathan” run-up, involving a mysterious worldwide-control character/organization who’s destroying all the other mysterious worldwide-control groups, like A.R.G.U.S., the D.E.O., Checkmate, Spyral, etc.  The Clark/Lois teamwork (and the way her strengths complement his) is a highliight, 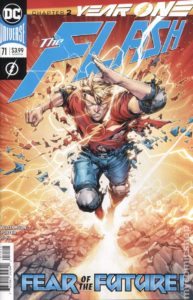 as is the sense of vast forces at play, and this does its job of intriguing readers about the next chapter: the six-issue Event Leviathan series starting in June, by Bendis and longtime collaborator Alex Maleev.  The Flash offers the second chapter of a new “Year One” story, with a young, newly-powered Barry Allen ending up inadvertently time-traveling to the future, and finding (a) a dystopia created by his first bad guy — but one who, in this telling, he hasn’t met yet — and (b) his own future self, who of course has some cryptic advice. These early-origins tales are almost always fun, and Joshua Williamson, with the very traditional-superhero-solid Howard Porter on the art, seems to be crafting a good one. 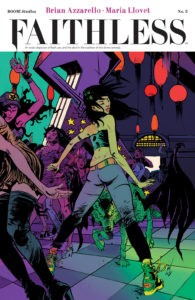 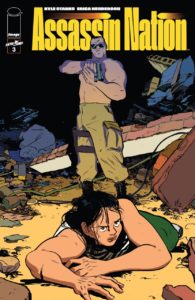 Faithless is a Brian Azzarello story about a girl named Faith who meets another, wilder girl who might be her soulmate — except that it’s a horror story, so nothing is what it seems (as we saw in the striking last page to last month’s first

chapter); this installment introduces other characters and extends the mystery, although occult forces are clearly involved; the main cover is by Paul Pope — a good choice, because interior artist Maria Llovet has some of his cool modern glamour and ability to draw sexy, fashionable people.  Assassin Nation starts with the concept that hitmen (and women) have international ratings just like golf or tennis or chess players; the number-one assassin in the world has a contract out on him, and wants to enlist the other nineteen killers in the top twenty to guard him. We’re three issues in, 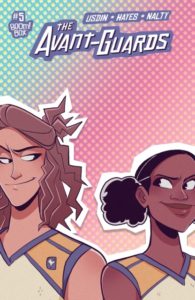 and those twenty characters are now down to seven, so you can see how it’s going — if you like the over-the-top violent humor of Die!Die!Die!, and admire Erica Henderson’s bold, cartoony art, then this is for you.  Ghost Tree is drawn by Simon Gane, another hip, strikingly individual artist (They’re Not Like Us; UnFollow) with a gift for caricature and likable characters; he’s illustrating Bobby Curnow’s story about a young man who returns to his ancestral home in Japan, to find that it has a tree in the yard that attracts spirits that he can see and talk to — including his dead grandfather, who explains that it’s a family talent. 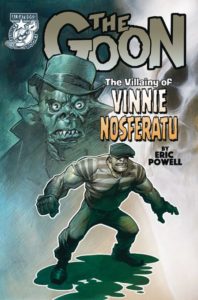 It’s a horror comic, too, but an unusually quiet and cheerful one, at least so far.  The Avant-Guards is about a group of women students at a fine-arts college who form a basketball team; there wasn’t that much actual basketball in its first four issues (and none in this one at all), but the relationship building, the smart and diverse cast, and the clear, thin-lined art of Noah Hayes, who has one of the toughest art jobs here — drawing another character’s supposedly-accomplished paintings — and pulls it off without breaking a sweat, along with making everyone attractive and fun to be around.  Nobody in The Goon is either attractive or fun to be around, but Eric Powell’s 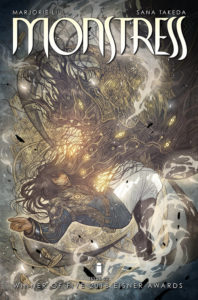 accomplished, ink-drenched E.C.-tribute art keeps us coming back to watch the adventures of its hero, a muscled dock-worker-type brawler who has some of Popeye’s indestructibility, and uses it to hammer on various occult menaces, like the vampire mobster Vinnie Nosferatu, who are dumb or unlucky enough to get in his way.  Finally, there’s Monstress, touting its five 2018 Eisner Awards on the cover (and why not?); Marjorie Liu’s lush high-fantasy world and characters are brought to perfect life by Sana Takeda, who draws cute fox girls and Lovecraftian multi-eyed dragon creatures with equal care, and is a big reason for all those accolades.

With 40 years of experience in comic reading, collecting and reviewing, English Professor Phil Mateer has an encyclopedic mind for comics. Feel free to ask Phil about storylines, characters, artists or for that matter, any comic book trivia. He will post your questions and answers on the AABC blog. His knowledge is unparalleled! He is also our warehouse manager, so if you are looking for that hard to find comic book, ask Phil!
View all posts by Phil →
This entry was posted in New Comics, Reviews and tagged Agents of Atlas, Alpha Flight, Asgardians of the Galaxy, Assassin Nation, Avant-Guards, Avengers, Doctor Strange, Faithless, Flash, Ghost Tree, Goon, Iron Fist, Journey into Mystery, Marvel Comics Presents, Miles Morales, Monstress, Moon Girl and Devil Dinosaur, Mr. and Mrs. X, Power Pack, Punisher, Runaways, Spider-Girl, Spider-man, Superman, Venom, War of the Realms, X-men. Bookmark the permalink.