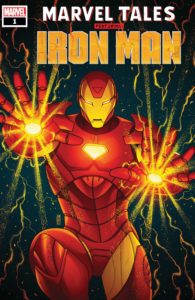 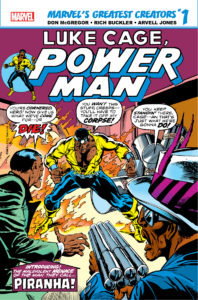 Marvel Tales keeps offering reasonable reprint deals to celebrate Marvel’s 80th anniversary — this week, celebrating Iron Man; for $7.99, you get: the 13-page origin from Tales of Suspense #39, from 1963, complete with artist Don Heck’s 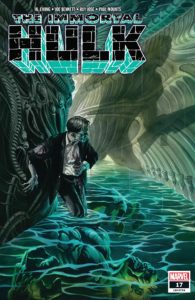 sinister Vietnamese warlords and wizened Asian ancients with pale-yellow skin; the 18-page introduction of Pepper Potts and Happy Hogan, less than a year later, with Heck’s ’50s-crime-comics chops particularly clear; and, from the ’80s, the 40-page Iron-Man/Doctor-Doom-marooned-in-Camelot story from Iron Man #150, with early John Romita Jr. pencils — plus the covers to all three books, and a two-page historical essay from former Marvel editor Ralph Macchio.  That’s a good deal, but if you like your reprints simpler, and cheaper, there’s always the $1 reproduction of the mid-’70s Luke Cage, Power Man #30; Don McGregor’s dialogue- 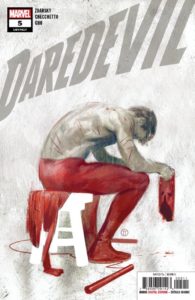 heavy, socially-conscious, weird-villain script wears surprisingly well, although the deadline-rushed tag-team art hardly lives up to the “Marvel’s Greatest Creator’s” blurb on the cover. For what might be Marvel’s best current book, read Immortal Hulk #17, by Al Ewing and Joe Bennett, with Bruce Banner trapped in an underground military installation with a killer, and unable to turn into the Hulk physically; it’s clever and with callbacks to classic older stories, and, although “beautifully drawn” probably isn’t the right phrase for what’s essentially a shock/horror comic… geez, it’s beautifully drawn. Daredevil reminds us that, although writer Chip Zdarsky got his start on light- 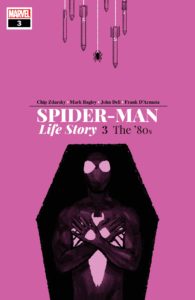 hearted books like Howard the Duck, he’s been making a name in grittier superhero stuff lately, with both this and Spider-Man: Life Story. Daredevil, as a comic, is bipolar; it’s either Stan Lee fast-paced swashbuckling fun or Frank Miller gritty film noir. Zdarsky’s doing the noir, adding the same extra doses of Catholic guilt that the Netflix versions did; the Marco Checchetto art is suitably intricate and ink-drenched. Spider-Man: Life Story is a higher-concept What-if? -type mini-series imagining a world where Peter Parker and his cast aged normally from 1962, his debut, until now: decade by decade. This week’s issue looks at the ’80s: so, Kraven’s Last Hunt, 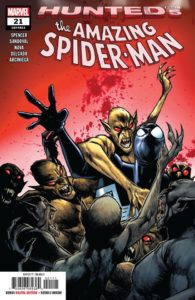 but with a Spidey who’s married, with kids and pushing 40, and an Aunt May who’s descended into Alzheimer’s; this is done smartly and, thanks to Mark Bagley’s art, stylishly, although it could use some of that Howard The Duck lightheartedness. An older Kraven — with a grown son — is also featured in the current Amazing Spider-Man serial “Hunted,” with dozens of captured animal-themed spider-villains, from the Vulture to the Gibbon to the White Rabbit to the Black Cat, getting chased and killed by VR-wearing Wall Street one-percenters; this week’s #21, the penultimate installment, is almost entirely action, and entertainingly so.

War of the Realms: Spider-Man and the League of Realms #1 (of 3) — Writer: Sean Ryan;  Art: Nico Leon;  Colors: Carlos Lopez 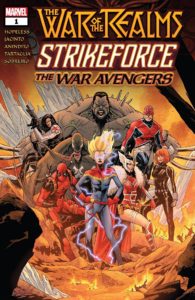 War of the Realms is proceeding briskly enough, with issue number four of six out;  first, though, the one-shot War of the Realms Strikeforce: The War Avengers covers a Captain Marvel-led team of Deadpool, Weapon H, Black Widow, the Winter Soldier and other warrior types fighting

a rearguard action in an almost-overrun NYC, and is best read before the main title. In that comic, Jason Aaron and Russell Dauterman handle the dozens of characters and locations involved in a Norse-mythology invasion of Earth confidently and clearly, with the various campaign strategies and battlefronts easy to follow, as they lead into related spotlight series like the three-issue  War of the Realms: Spider-Man and the League of Realms; that’s got our guy Parker picked by Thor to be Midgard’s representative on a nine-realm special-ops team that’s carrying out missions on the now-occupied Earth. Why 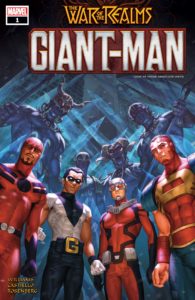 Spider-Man? Because, as Thor explains, “you are the most Midgardian man I know”; that’s actually a pretty good take on Parker, and it pays off so far here, especially with Nico Leon, who worked on the last She-Hulk series and on the Bendis-era Civil War II issues of the Miles Morales Spider-Man, providing the well-staged and approachable art. Giant-Man has a “War of the Realms” tagline on the cover, but not on its official title — a puzzlement, since it’s as closely tied to the series as all the other spinoffs; it should really be called Giant-Men, since it’s got four Marvel size-changers (Eric “Power-Man/Atlas” Josten, Tom “Goliath” Foster, and Ras “Giant-Man” Malhotra, along with the Scott Lang Ant-Man) banding together, pumping up and putting on blue dye to 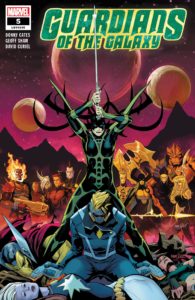 try to infiltrate the 65-foot-tall Frost Giants who are invading the planet; it’s an amusing caper movie, with its endearingly regular-guy protagonists presumably coming out (… er, on top?) by the end.  Guardians of the Galaxy is still dealing with the aftermath of the last big crossover, the Infinity Wars one that led to the death of Thanos; you can’t keep a good Titan (or Marvel/Disney intellectual property) down for long, though, so of course by the end of this story he’ll be resurrected, courtesy of Donny Cates, Geoff Shaw and a big chunk of Marvel’s cosmic/space -opera characters, with this penultimate installment explaining exactly how it’s going to happen. 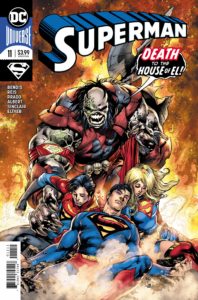 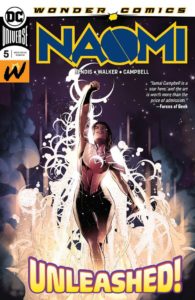 The Brian Michael Bendis takeover of DC continues apace: Superman has the El family — Superman, now late-teens son Jon and father Jor-El — in space fighting a teamed-up Rogol Zaar and Zod, plus a bunch of other interested 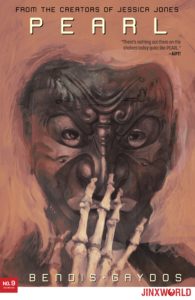 parties, with a last-page addition that sets the scene for next issue’s conclusion nicely; it’s a complicated plot, but the clear Ivan Reis art and Bendis’s knack for easy dialogue and internal monologue make it easy to follow.  Naomi, five issues into its six-issue introductory story, finally reveals much about its teen title character’s origins and emerging powers; this began as an under-the-radar series, but the first issue is now selling for $75 on eBay, with readers realizing that it may have lots of tie-ins to upcoming DC events. Don’t worry about that, though — just pick up the later printings

and read the story, and admire how Bendis plays to artist/colorist Jamal Campbell’s strengths, with Campbell nailing every splash and small emotional moment equally well.  Pearl does similarly well by its artist/co-creator, Michael Gaydos; he and Bendis created Jessica Jones years ago, and their teamwork on this comic, about an albino tattooed artist/potential assassin/potential Yakuza head, gives readers a strong, complex woman whose portraits, movements, settings and cast are all beautiful, fascinating and compelling.  Batman sees Bruce Wayne finally out of the bad guys’ 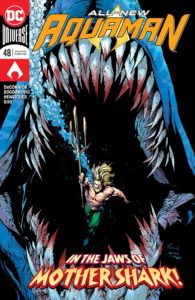 captivity, but still being manipulated by arch-rival Bane (no one in Gotham but Batman realizes that Bane is controlling the entire city; they all think the Caped Crusader is crazy); this is leading into a multi-part showdown, as writer Tom King’s unprecedented 100-issue storyline rounds into its final quarter. Over in Aquaman, Kelly Sue DeConnick continues her own, more modest-length arc with the once-amnesiac Sea King learning his origins; it’s got the mystical/mythological connections she’s able to tap so well, and gives artist Viktor Bogdanovic two splash pages, and five double-page spreads, to show off while he’s helping her do it. 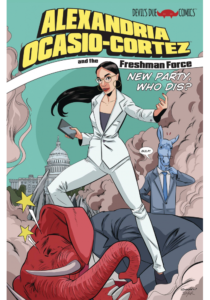 Alexandria Ocasio-Cortez and the Freshman Force #1 (of 1) — Creators: Various 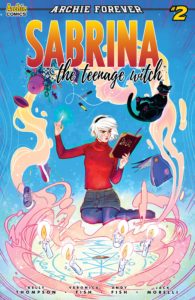 Alexandria Ocasio-Cortez and the Freshman Force is a harbinger, the first of what are sure to be many 2020 presidential election comics; as the title and cover should make clear, it’s a decidedly liberal and anti-Trump affair, 48 pages of short takes on the freshman congresswoman and some of her recently-elected friends, with a quality 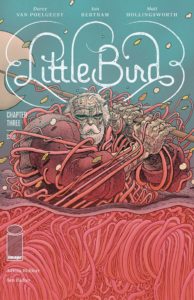 that’s at least better than all those Bluewater political books from a couple of elections back. Points for using the back cover to reproduce some of the trolling emails the publisher received once news of the comic’s subject was announced.  Sabrina has the advantage of being by Kelly Thompson and Veronica Fish, who track the witchy Greendale High School resident  as she tries to figure out why supernatural monsters keep showing up around her, and wield a style closer to classical-Archie Dan Decarlo than edgy-horror Roberto Aguirre-

Sacasa. Little Bird is a dystopian-SF tale of a young girl’s resistance to a tyrannical religious dictatorship, considerably enlivened by Ian Bertram’s obsessively-detailed, violent European-style art (much like Andrew MacLean’s over in Head Lopper), while Cinema Purgatorio, Alan Moore’s black-and-white horror anthology, reaches its final issue and also traffics in religious theory, as Moore and Kevin O’Neill explain who their title-serial narrator is, what she’s done and how it’s caused her current state; the other continuing stories, with creative teams ranging from Garth Ennis/Raulo Caceres to Kieron 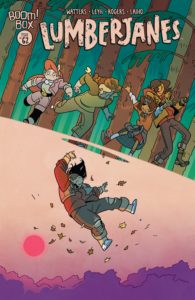 Gillen/Nahhuel Lopez to Max Brooks/Gabriel Andrade, get similar resolutions — or at least the ends of their first volumes. That leaves Lumberjanes, with Mal having fallen through a portal and stuck in another dimension (the kind of thing that happens in the summer camp’s forest more than you might think…); the gang has to go get her, but inevitably gets drawn into trying to fix what’s wrong — much to the irritation of Mal, who just wants to go home, get a shower and eat junk food for once. It’s all as charming and sharply (if deceptively simply) drawn as ever, and just the right comic to end the week’s pile.

With 40 years of experience in comic reading, collecting and reviewing, English Professor Phil Mateer has an encyclopedic mind for comics. Feel free to ask Phil about storylines, characters, artists or for that matter, any comic book trivia. He will post your questions and answers on the AABC blog. His knowledge is unparalleled! He is also our warehouse manager, so if you are looking for that hard to find comic book, ask Phil!
View all posts by Phil →
This entry was posted in New Comics, Reviews and tagged Alexandria Ocasio-Cortez, Aquaman, Batman, Cinema Purgatorio, Daredevil, Ear of the Realms, Giant-Man, Guardians of the Galaxy, Hulk, Iron Man, Little Bird, Lumberjanes, Naomi, Pearl, Power Man, Sabrina, Spider-man, Superman. Bookmark the permalink.