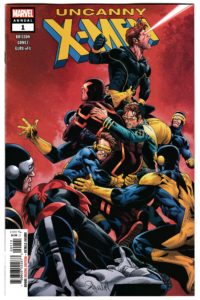 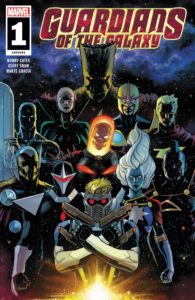 Uncanny X-Men Annual is a Cyclops-centric story explaining how Scott Summers came back from the “dead” (if you haven’t been following events in the UXM relaunch, at this point all the other X-Men/mutants have been wished away by Nate Gray, leaving only Cyke (and the also-newly-returned Wolverine) to set things right); it’s a decent stand-alone story for fans of the character, and a major link to the overall title’s storyline: reason enough to pick it up. 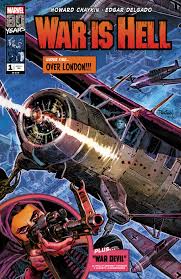 Guardians of the Galaxy is yet another relaunch of that movie-franchise title; Drax is gone, and so is Rocket, and so is Gamora; the new lineup can be sussed out on the cover, up on the right there: Star-Lord and a now-talkative Groot, along with, among others, the Silver Surfer, Warlock, Beta Ray Bill, Darkhawk, Moondragon and the Cosmic Ghost Rider.  That last one is logical, since the series’s new scripter is Donny Cates, who created him; the Cates connection should increase interest in the comic, too, since so far everything he’s written for Marvel has been popular with both fans and critics. The inaugural story involves Thanos reincarnating his personality in… well, someone else, and the plot has the heroes trying to figure out who; if you like the 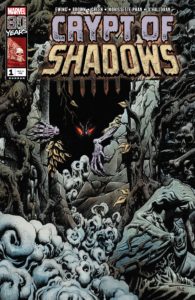 cosmic-themed corners of the Marvel Universe, then this book should make you happy.  War is Hell and Crypt of Shadows are part of the company’s 80th-anniversary celebration, a series of one-shots built around some of their now-gone older titles (and, not coincidentally, a way of keeping the trademarks on those titles). War is Hell‘s best attraction is a ten-page WWII tale written and drawn by Howard Chaykin, who knows a lot about the history of that period; it centers on a German fighter pilot who’s also a jazz fan, and is just as well-drawn as you might expect. A second ten-pager, “War Devil,” by Phillip Kennedy Johnson and Alberto Albuquerque, is set in current-day Afghanistan, and looks at war as a kind of supernatural infection/possession; there’s also a two-page article about 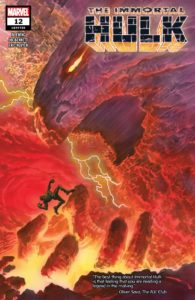 Marvel’s war comics during the company’s long history.  Crypt of Shadows sports three horror stories by Al Ewing, each by a different artist; it turns out they’re all connected, and build to a satisfying climax — especially if you’re particularly afraid of dogs. Ewing has been stretching his horror chops very successfully over in Immortal Hulk, too, with that title building an increasingly-terrifying role for the character; check out this week’s installment, with its chilling last page, and appreciate how well Ewing and artist Joe Bennett work together to create a story much deeper and stranger than the typical “Hulk smash!” offering, one that’s put it on the top of the current Marvel crop of relaunches. 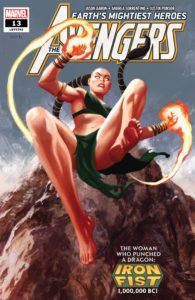 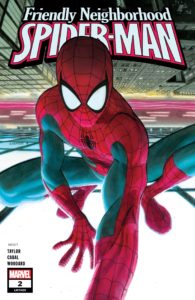 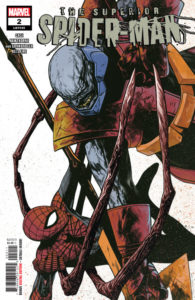 Avengers has been toggling between current events (Black Panther as chairman, a vampire civil war, eight other crises, etc.) and Jason Aaron’s “One Million BC Avengers,” looking at a pre-historic group of various cosmic beings who roamed the planet then; this issue spotlights the woman who was the very first Iron Fist, her exile to the primitive Earth, and her first encounters with yet another cosmic being. OK story (better than that if you don’t mind that, really, it has little to do with the main ongoing story, although with Aaron it’ll probably hook up eventually), 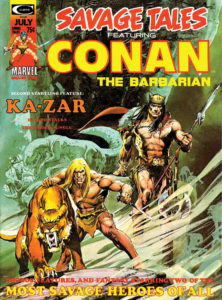 redeemed by good-looking art and coloring work.  Friendly Neighborhood Spider-Man continues a story centered on Peter Parker’s NYC surroundings and the inhabitants there, both human and… not; Tom Tayler’s done good work for both DC (on Injustice) and Marvel (especially with X-23 on All-New Wolverine), and the characterization and humor of that latter title, especially, are on display here, too.  Superior Spider-Man covers the San Francisco-based former Doctor 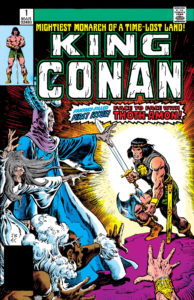 Octopus, trying to be a good guy and (usually) succeeding; as it did in the original Amazing Spider-Man series, the idea of a Spidey who’s the opposite of the humble, responsibility-driven Peter Parker in personality makes it interesting, and a battle with the cosmic-powered Terrax gives the character plenty of challenges.  There are also a batch of reprints this week: two more of the “True Believers” $1 reprints centering on Conan the Barbarian, and both written by Roy Thomas: The Secret of Skull River, from Savage Tales #5, is notable for the Jim Starlin art, while King Conan represents the first issue of that ’80s spinoff, telling tales of 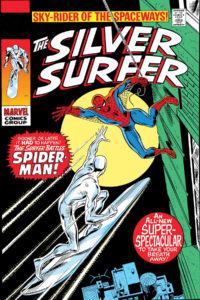 the Cimmerian at the end of his career; 36 pages of wonderful John Buscema art for a buck will be your best buy of the week.  That leaves the Marvel “facsimile reprint” of Silver Surfer #14 (meaning that it’s exactly like the original, including ads, except for the $3.99 price on the cover and a change to the indicia on page one); read it to appreciate how Stan Lee and John Buscema manage a complete story, with a number of twists, in 20 pages; to read the Mighty Marvel Checklist of the other comics published that month; and for the two-page letters section, including missives from future pros Doug Moench and Alan Brennert: a time-capsule blast from the past of 49 years ago. 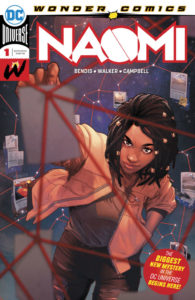 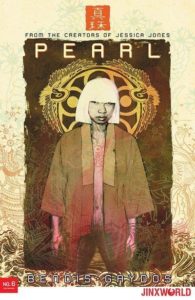 This week brings three DC books written by Brian Michael Bendis — Naomi, co-written with David Walker, is the debut of another from his DC-continuity-linked “Wonder Comics” imprint, while the other two are from his personal, self-contained, creator-owned “Jinxworld” one. Naomi‘s 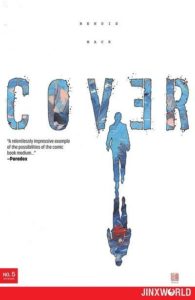 smart teen minority YA-friendly character taps into the top juvenile fantasy of all time: she’s begins to discover that she’s not actually just a normal boring small-town girl, but has a Secret Special Past that makes her unique, and involves the “biggest new mystery in the DC universe,” at least according to the cover. It’s all done with skill, and realistic dialogue and relationships played out against a superhero-aware society (a Bendis signature since his and Michael Avon Oemings’s Powers);  Jamal Campbell’s sharp, engaging lines make him yet another in a long line of talented artists working on 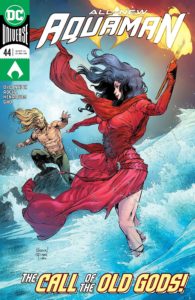 Bendis books: witness Michael Gaydos’s strikingly-rendered half-Asian self-tattooed yakuza assassin/rebel in Pearl, which completes its first book with this issue, and the obvious fun being had by David Mack and Michael Avon Oeming in rendering both the comic-book artist recruited as a US spy in the multiple-meaning-titled Cover, and pages of “comic art” by him and others in the book; these — especially Pearl — are top-notch suspense/crime/noir comics on the same high level as David Lapham or Ed Brubaker/Sean Phillips, and fans of 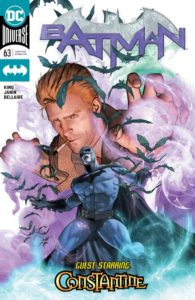 those creators should check them out.  Meanwhile, Aquaman offers the second chapter of its current hero-with-amnesia arc; only a writer with Kelly Sue DeConnick’s poetic, mythology-laced talents could pull off an ancient soap-opera plot twist like that, and she’s helped by Robson Rocha’s evocative, dreamy art, which creates just the needed atmosphere.  Batman sees its title character currently unconscious,  trapped in a machine made to drive him insane; fans who wanted to see Bruce and Selina Kyle get married back in issue #50 get the 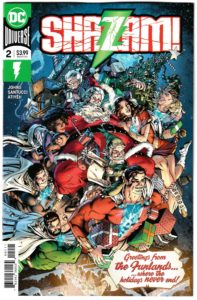 happy-ending alternate-dream version here, along with John Constantine as the voice of reality, in another twisty, psychologically-rich episode of Tom King’s 100-episode ongoing bat-story.  Over in Shazam‘s second issue, Billy, Mary, Freddie and the other three new Marvel family kids/avatars are down in that iconic subway station, taking a trip through the “Magic Lands” and getting gradual backstory on their powers; none of them ever appear in costume, and the book’s already running late — as evidenced by the Santa Claus-themed cover — neither of which bode well for its 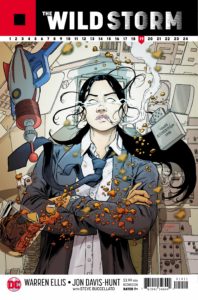 continuing success — although it’s hard to count a writer like Geoff Johns out just yet.  Finally, The Wild Storm sees Warren Ellis and Jon Davis-Hunt’s two-year revival of the Wildstorm universe beginning its six-issue conclusion, as IO and Stormwatch’s rivalry puts the planet in danger, we get a page of the Midnighter and Apollo, and the Doctor talks to her ancestors and gets a big infodump about the Kherans, the Daemons, and their places in the secret history of the world; Ellis’s Stormwatch back in the ’90s kickstarted that comic into one of the top ten in the field, and led to the even-more-groundbreaking Authority, so it’s a pleasure to watch him rework/update some of that magic here, too. 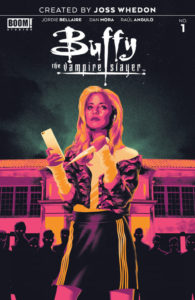 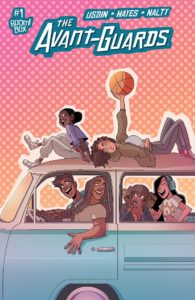 Boom! Studio’s relaunch of Buffy the Vampire Slayer doesn’t offer a new “season” of the show, the way the Dark Horse version did, but instead is a total reboot: it begins with Willow and Xander meeting Buffy for the first time (as, of course, she’s killing a vampire), and then goes from there;  also unlike the Dark Horse series, there’s no suggestion that Joss Whedon is “showrunning” the book — he’s only listed in a “created by” note.  None of this is a bad thing;  new readers, especially, can begin without story 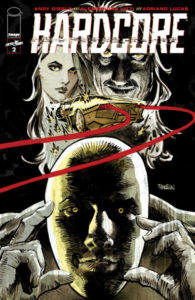 baggage or massive mythology to keep straight, although there are plenty of shout-outs and character appearances — including a last-page one — that older fans will appreciate too. Nice art, and some gorgeous coloring by Raul Angula — I suppose when top industry colorist Jordie Bellaire is the writer, you know you have to hit it out of the park, and he does.  The Avant-Guards is about a girl who transfers to a theater-arts college; she runs into some other women who are trying to start a school basketball team (hence the comic’s title), and puts them off — but it turns out she’s a more-than-decent player, and the book proceeds from there.  Think Lumberjanes, with everyone college-age instead of in middle school, and with no magic forest, but with the same 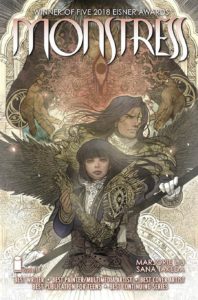 sharply-defined characters, humor, cartoony art  and themes of friendship: it’s a very appealing all-ages first issue.  Hardcore is sf/crime suspense, co-created by Robert Kirkman, about a professional government assassin who can “take over” the minds of targets, and use their bodies; unfortunately, while he’s doing that with a South American revolutionary, a rival initiates a coup against him — so, his own body is in a secret government lab, locked away securely, and now he has to survive the South American stuff, and travel 4,000 miles to his lab before the rival can break in and kill him. Oh: and the rival can see everything he’s doing, through his eyes. Cool hook, and this second issue ups the action considerably, after a bunch of set-up in the first one; get them both, and you’ll have the first chunk of a fast-paced, intriguing story.  Monstress returns after a hiatus, and sporting five Eisner awards and a number of other high-profile accolades; get it to appreciate what 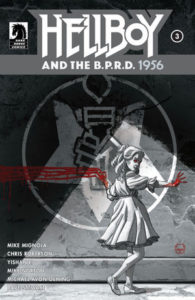 the judges did: Sara Tanaka’s lush manga-centric art and Marjorie Liu’s fascinating world-building and character work — then, pick up the trades to get the full earlier story of one of comic’s top high-fantasy books. Hellboy and the B.P.R.D.: 1956 continues its look at the early cases of that occult-investigation organization and its central boy demon; this issue only has the title guy in one panel, but plenty of plot development — including five Michael Avon Oeming-drawn pages on the demon-possessed Russian girl Varvara, which link to present-day events in the regular B.P.R.D. title: enough incentive for fans of the soon-concluding Mignola-verse books to get it.

With 40 years of experience in comic reading, collecting and reviewing, English Professor Phil Mateer has an encyclopedic mind for comics. Feel free to ask Phil about storylines, characters, artists or for that matter, any comic book trivia. He will post your questions and answers on the AABC blog. His knowledge is unparalleled! He is also our warehouse manager, so if you are looking for that hard to find comic book, ask Phil!
View all posts by Phil →
This entry was posted in New Comics, Reviews and tagged Aquaman, Avant-Guards, Avengers, Batman, Buffy the Vampire Slayer, Conan, Cover, hardcore, Hellboy, Hulk, Monstress, Naomi, Pearl, Shazam, Silver Surfer, Spider-man, Uncanny x-men, Wild Storm. Bookmark the permalink.