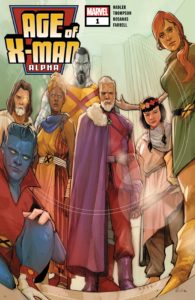 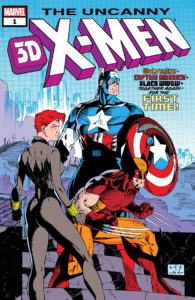 If you don’t like alternative-timeline stories, and especially if you didn’t like Marvel’s four-month “Age of Apocalypse” crossover/detour in the mid-’90s, then you won’t be happy with Age of X-Man: Alpha, or the next five months of its assorted spinoffs and new launches, because structurally it’s the exact same thing, with six new five-issue monthly series exploring the new world it’s created. On the other hand, those ’90s AofA series have been steady back-issue sellers even today,  and have a lot of fans; shaking up sometimes-too-familiar characters by giving them new guises, personalities and lives is the selling point behind both Marvel’s What If? books and DC’s Elseworlds ones, after all, and both of those series 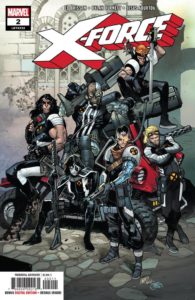 have been popular for decades.  This look at a Marvel Earth where everyone’s a mutant, and everyone’s happy — at least on the surface — is the kind of utopian/dystopian world-building that can be fun, and give different creators a chance to show their skills: Age of X-Man: Alpha does the heavy lifting in terms of set-up, explaining its new world’s rules and carefully spinning off each new series.  Buying it will get you ready for the next five months of mutant-related X-position and X-citement.  Uncanny X-Men 3D is just what its title promises: a 3D version of Uncanny X-Men #268, a one-shot tale by Chris Claremont and Jim Lee that begins with a newly-minted Cap meeting Wolverine and a very young Black Widow in Madripoor in 1941, and then toggles between that story and its related present-day ramifications.  Claremont/Lee is a classic team, and Lee’s art is a good choice for the 3D process — as the first-page splash with Cap leaping out at the 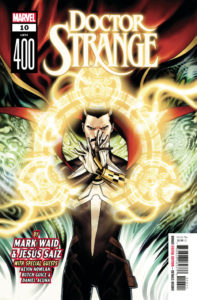 reader shows from the start — so the $7.99 price isn’t bad, especially considering it comes bagged and with the requisite glasses. X-Force #2 sees the new, younger version of Cable getting the band back together (although it’s never one “he’s” led) to fight a middle-European dictator who’s killing mutant refugees; the lineup — Domino, Shatterstar, Deathlok, Cannonball and Warpath — mixes old and new elements effectively, and Dylan Burnett’s spare, caricature-y art gives the over-the-top action and violence just enough clarity and tinge of humor to make it work.  Doctor Strange celebrates a 400th-issue anniversary with the start of a new story, not the conclusion of an old one, and with a cliffhanger ending that means you’ll need the next couple of issues of the regular book to see what happens next. That said, it’s a good process-oriented tale about the omni-universal costs of magical spells, who keeps track of them, and what happens when the bills come due; Jesus Saiz gets to show off some striking visual and coloring effects, especially on the last few pages. In addition to that regular story, your extra $2 for the added anniversary pages adds three others, all written 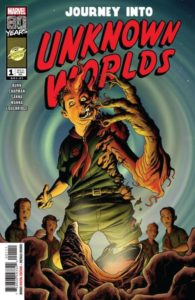 by Waid and drawn by previous Doc artists: a five-pager by Butch Guice, an eight-pager from Kevin Nowlan that looks at Strange’s origin from the Ancient One’s perspective, and a five-pager about Nightmare (Doc’s first adversary) by Daniel Acuna — plus a double-page splash from Tom Palmer.  Journey Into Unknown Worlds, part of a series of one-shots celebrating Marvel’s 80th anniversary, revives that ’50s science-fiction comic with two new EC-like tales about the horrific effects of alien invasions; there’s also a two-page editorial looking at the history of the company’s other ’50s-’60s titles in the sf genre, and a cover gallery that ends with the last and most famous of them: 1962’s Amazing Fantasy #15. 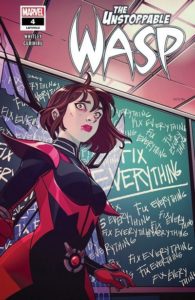 West Coast Avengers sees the addition of old Kate flame and former Young Avengers member Noh-Varr (counting America Chavez, this book now has 50% of that cult-favorite previous group’s members), and lots of maneuvering against the cadre of California-based bad guys who have trapped the heroes; it’s continuity- and character-rich and looks cool while doing it. Unstoppable Wasp shows something rarely seen in superhero books:  the aftermath of a fight: people hurt, everyone banged up and feeling guilty, title character 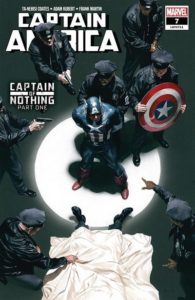 Nadia spiraling into a manic fugue state; it’s a change-up pitch from a normally-upbeat book, and all the more effective for it. Amazing Spider-Man has guest artist Chris Bachalo drawing the Lizard (and his semi-reptilian family), a massive Rhino, and a bunch of other characters, including the Taskmaster, in the first of a two-parter that ends here in an explosive cliffhanger: great stuff, and with the conclusion coming in just two weeks it’s the perfect self-contained antidote for all of those drawn-out crossover events.  Captain America‘s current 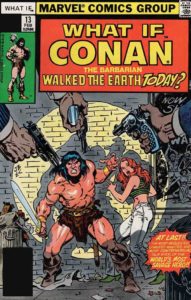 volume begins its second arc; as on his Black Panther, writer Ta-Nehisi Coates spent the introductory story here getting a feel for the character, his world and supporting cast and themes, and now uses a Cap-wanted-for-murder plot to kickstart the new narrative; I’m a sucker for “hero against the authorities” tales, so I’m on board.  Two more Marvel “True Believer” one-dollar reprint comics arrive this week, too, both again involving Conan: 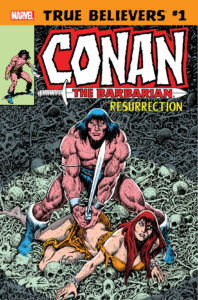 The What If? is from issue #13 of that title’s first volume, from 1979, while “Resurrection” is from #187 of Conan’s first Marvel comic series, from 1986; both have the John Buscema/Ernie Chan art team that drew so many of the barbarian’s most popular adventures, with the difference that in the What If? it’s about 70% Buscema and 30% Chan, while in “Resurrection,” seven years later, it’s more a 50-50 collaboration: either way, both for two dollars, especially on paper that shows off the art much better than the original comics ever did, is a great deal.

Mysteries of Love in Space hijacks part of DC’s venerable 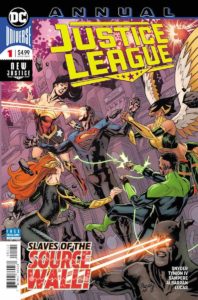 Mystery in Space title for an sf/Valentine’s-Day anthology; you get eight ten-page stories on glossy paper for $9.99: one set on Apokolips by James Tynion IV and Jesus Merino; a GL/Kilowog one by Kyle Higgins and Cian Torney; a Bizarro tale by Saladin Ahmed (one of the few writers to do a decent job on his “backwards” dialogue) and Max Dunbar; Hawkgirl by Cecil Castellucci and Elena Casagrande; Space Cabbie by Aaron Gillespie and Max Raynor; Crush (the Teen Titans member who’s Lobo’s daughter) by Andrea Shea and Amancay Nahuelpan; Lois Lane and Superman by Jeff Loveless, Tom Grummett and 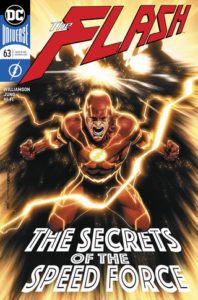 Cam Smith; and an Adam Strange reprint — his first appearance, from 1959’s Showcase #17 — by Gardner Fox and Mike Sekowsky. That last one, unsurprisingly, stuffs a lot more exposition and plot into its ten-page format than the new ones, and tells a smoother story, but the Lois Lane, Bizarro and Space Cabbie offerings stand out, too. Heroes in Crisis moves its plot forward a little, but the main attraction is still the one-page vignettes of various heroes talking — or not talking — about their various traumas; I also like Tom King’s view of Booster Gold as amiably, unmistakably insane.  While the “murder mystery’s” probably outcome has been obvious from the first five pages of the first issue, this is the kind of tale where it’s the 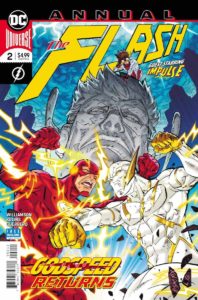 journey, not the destination, that makes it interesting, and by that standard it’s been a success.  Justice League is another annual that, instead of ending something, starts it: it adds yet another new multiverse-changing event, and the introduction of another cosmic-themed mega-powered bad girl, to what’s already a very full plate, courtesy of Scott Snyder and James Tynion IV.   If you’re reading the regular book, or want to keep track of DC’s ongoing metaplots about its universe(s), then it’s an important piece of the puzzle, with ramifications echoing through a number of other books this year.  Same for The Flash: read the regular issue, out this week, to get

the resolution of the current storyline and see Barry find out about Wally West’s fate over in Heroes in Crisis; then, go directly to the Flash Annual, also out this week, for the continuation of that story, the return of adversary Godspeed, an appearance by Impulse, and the Big Bad setup for the next year’s worth of Flash fables.  The annual benefits from the Scott Kolins art; writer Joshua Williamson’s been on this book since its relaunch, and continues to keep it one of DC’s best continuing superhero titles.  Brian Bendis begins a new Action Comics arc, “Leviathan,” about that shadowy conquer-the-world cabal from the Batman books, and mixes in Kobra, a game-changing 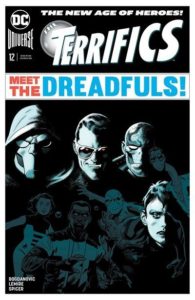 conversation between Lois and her father, and an appearance by Amanda Waller; Steve Epting is a very solid, realistic-superhero artist who should be perfect for the thriller/suspense/international intrigue tone over the next few months. Finally, The Terrifics sees that group dealing with dark-universe versions of themselves, led by an old/new adversary, while Plastic Man tries to bond with his similarly-powered kid, Phantom Girl finds that going home isn’t as great as she thought, and a depowered and now-human Rex Mason makes an inevitable decision: all by ways of getting the group back together, and written by the dependably-entertaining Jeff Lemire. 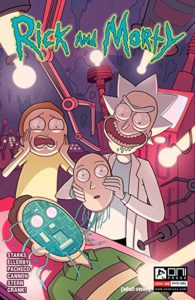 Fight Club is that rare spinoff comic actually written by the property’s original writer. That’s good, although God help you if you pick this up and haven’t read the other two volumes of the series — Palahnink offers no help, no clues and no explanation of what’s gone before, who these people

are or why we should care. If you have read them (or at least seen the movie) then you can puzzle it out, and even appreciate the work, but if you aren’t a fan this probably won’t make you one.  Rick and Morty has two issues out this week (it has now published, I think, over twice as many total issues as there are episodes of the cartoon…); the regular comic, from its regular creative team, has R&M going to a planet where Ricks leave their Morties to get some down time away from them — but the Morties band together, with predictable 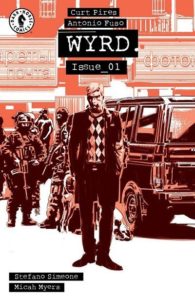 results plus a twist or two. Rick and Morty Vs. Dungeons and Dragons concludes its four-episode run; that many pages for one story let it cover the complicated family/Rick relationship almost as much as the animated version — plus, if you grew up on D&D it’s an unabashed valentine to the game, even more reason to get it. Wyrd is a Lone Tough Guy who takes on cases nobody else could solve: typical thriller-genre stuff, with a few mis-steps (a character arrives at a crime scene and says “Sitrep?,” which I’m pretty sure no one outside of a Chris Claremont ’90s comic ever says…), but it’s redeemed by some good 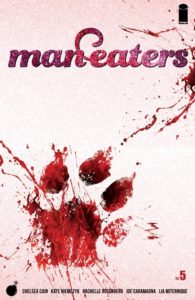 character bits and plot twists by Pires, and Antonio Fuso’s Alex Maleev-ish hightened-realistic art.  Man-Eaters has been teasing its central conceit (teen girls who hit puberty and start to menstruate might succumb to a virus and turn into literal were-panthers and kill people) for five issues now; all the social commentary in it is fine (one sly joke is that society treats the potential murderous-killer girls about the same as it treats hormonal teen girls now), but at some point, hopefully by the end of issue #6, the main character’s going to have to transform too. Whether the payoff matches the lead-up will determine the fate of this comic.

With 40 years of experience in comic reading, collecting and reviewing, English Professor Phil Mateer has an encyclopedic mind for comics. Feel free to ask Phil about storylines, characters, artists or for that matter, any comic book trivia. He will post your questions and answers on the AABC blog. His knowledge is unparalleled! He is also our warehouse manager, so if you are looking for that hard to find comic book, ask Phil!
View all posts by Phil →
This entry was posted in New Comics, Reviews and tagged Age of X-Man, Captain America, Conan, Doctor Strange, Fight Club 3, Flash, Justice League, Rick and Morty, Spider-man, Superman, Terrifics, Wasp, West Coast Avengers, Wyrd, X-force, X-men. Bookmark the permalink.