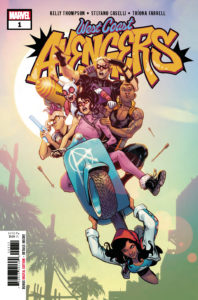 When we put the cover of this week’s relaunch of West Coast Avengers #1 up on the store website, almost all the comments were negative, presumably from fans who remember it fondly and don’t think this new iteration does justice to the original. This puzzled me, because I was working in a 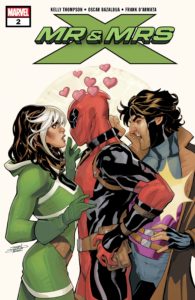 comic store when that first version came out, and always saw it as a B- or C-level title, where decent writers like Steve Englehart and Roy Thomas did lesser-tier work; John Byrne shows up for a year or two in the middle of the run to jazz things up, but otherwise, who would care about West Coast Avengers? The answer, I realized, is that old saying that “The Golden Age of comics is twelve”; for fans who were maybe twelve or thirteen or fifteen when it came out,  it represents those heady early years of reading comics. They want it to recreate the thrill they felt reading it back then.  Why doesn’t it? Because it’s not written for them; it’s written for twelve and fifteen-year-olds today —  that’s the audience primed for its mix of knowing, offbeat humor and irony and relationship drama and, yes, adventure and Marvel continuity too. Kelly Thompson’s gotten very good at stories for that audience the last few years, ever since her unexpectedly-readable Jem and the Holograms, and if you liked her recently-cancelled Hawkeye, West Coast Avengers is really just an expansion 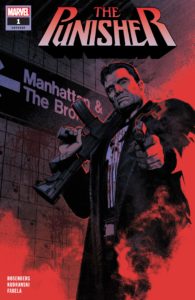 and continuation of it, with Stefano Caselli’s precise line and sleek, cartoony rhythms a good fit.   Thompson’s also the writer on Mr. and Mrs. X, a breezy, more-traditional X-Men book that currently has the newly-married Rogue and Gambit on an outer-space mission involving keeping a cosmic egg thingy away from a stowaway Deadpool; it feels written more for longtime fans, who grew up with the X-family too, and in between the knowing characterization and semi-slapstick plotting, it feels like everyone’s having a lot of fun.  “Fun” isn’t the first word that comes to mind with another first issue out this week, The Punisher, although there’s some grim satisfaction in watching him methodically mowing down the bad guys; in this volume, they aren’t gangsters, but a team of Hydra, Baron Zemo and the Mandarin, who’ve taken over a small Middle-Eastern nation and are trying to talk the UN into recognizing it; Frank, of course, has other ideas, and unless you’re one of 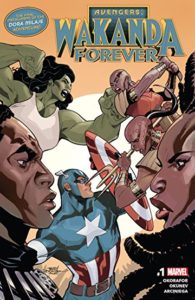 those fans who only wants to see him fighting classic mobsters and made men, you should appreciate the start of this arc. Finally, there’s Avengers: Wakanda Forever #1, actually the third and final chapter of a Black Panther/Dora Milaje tale that’s previously appeared in Spider-Man and X-Men one-shots this summer (so pick those up before you read this…); the Avengers are represented mainly by Captain America and the newly-savage She-Hulk, who team with Storm, Nightcrawler and Rogue from the last installment, although the spotlight’s more on the Wakandan warriors and their fight against a former comrade with stolen, and potentially deadly, tech. As with Punisher, if you’re a fan of those characters, this is a decent-enough example of their adventures. 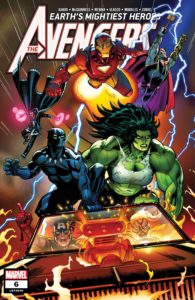 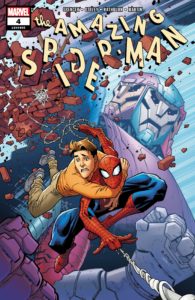 Avengers finishes its first arc of its relaunch; it’s suitably widescreen, with giant-sized versions of the characters fighting Earth-ending ultimate Celestials, although it leaves a lot of threads unfinished — understandable, though, when you consider that it has a 700th-anniversary issue looming

in just four more issues, so they had to leave some big stuff for that. Robbie Reyes/Ghost Rider fans should like his shot at the big leagues here; Jennifer Walters ones might not be loving her current big, dumb She-Hulk, although writer Aaron gets some effective bits out of it — but, on balance, this handles its position as one of Marvel’s flagship titles well.  That label applies to Amazing Spider-Man, too, whose own new-relaunch arc involves Peter and Spider-Man being zapped into two separate beings through a science accident; one gets the power, while the other gets the responsibility. That’s a very Mort Weisinger  Silver 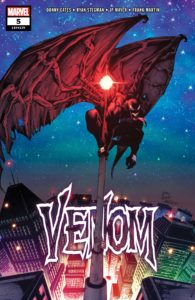 -Ageish plot, and it isn’t helped by being spread over six issues instead of getting resolved in a single 12-page tale, although artist Ottley’s clean, simple style serves it well; let’s wait another two issues and see how they stick the landing.  Black Panther is in the middle of yet another relaunch first story, but with a more interesting Panther-in-space galactic-empire rebel-adventure romp that feels like an Elseworlds saga, but is actually in continuity; I’m enjoying the way Ta-Nehisi Coates, after a couple of years on the title, has relaxed and let his inner wouldn’t-it-be-cool fan out to play, while Daniel Acuna’s art handles the challenging Wakanda/Star Wars mashup easily and well. 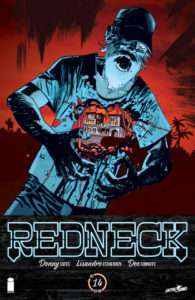 Venom sees new superstar writer Donny Cates reinventing the Eddie Brock/symbiote relationship, with a added alien mythology and backstory grafted to a fast-moving action plot; Ryan Stegman gets to draw things like a winged Venom (check the cover, up to the right there…), and has a lot of obvious fun doing it. One of Cates’s early Image breakout books, Redneck, is still being published too; its tale of Texas-based vampires slows down its own regular breakneck pace for some backstory and world-building.  If you’ve never read it before, it’s not a great jump-on issue (the first trade is the place for that), but for ongoing fans it’s an opportunity to deepen the character connections in an already-addictive comic. 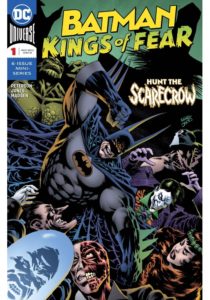 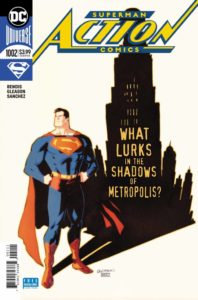 Batman: Kings of Fear is noteworthy for its Kelley Jones art — Jones has been using his dark, horror-tinged style to make the Caped Crusader look good for decades now, so a mini-series whose first issue spotlights his creepy version of the Joker, plus an all-out fight against a bunch of Arkham inmates, plus the Scarecrow, is an automatic buy.  Action, of course, spotlights the other half of DC’s World’s Finest duo, with Brian Bendis ramping up a 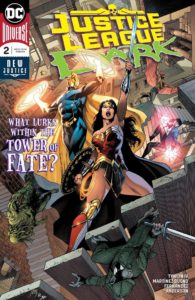 number of Superman-centric subplots involving the Daily Planet (his rapid-fire dialogue works particular well in the newsroom scenes), various criminals, a spy reveal, and the (apparent) last-page return of a missing cast member; all of this is presented smoothly and entertainingly, and there’s a first-page splash of Clark Kent’s newsroom computer, with a bunch of Post-It notes scattered around it that, if you have the time and the eyesight, are worth the price of admission by themselves. Justice League Dark‘s second issue continues to build the group and its magic-based mission, 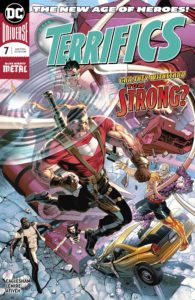 with Wonder Woman, Swamp Thing, Zatanna, Man-Bat and Detective Chimp visiting Dr. Fate’s Salem tower for answers, and finding more world-threatening conspiracy; James Tynion IV’s writing never quite impresses me, but it doesn’t disappoint, either; it’s always very solid, both in the character and plot work, and this is no exception.  Jeff Lemire’s writing often does impress, and in this week’s The Terrifics the interplay between the four main characters — Metamorpho, Phantom Girl, Plastic Man and the title-justifying Mr. Terrific — along with the introduction of the former ABC/Wildstorm hero (and Alan Moore creation) Tom Strong — show why this comic’s been one of the most successful of DC’s “New Age of Heroes” launches. 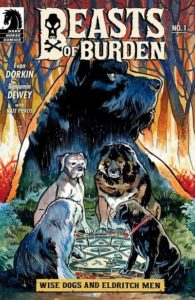 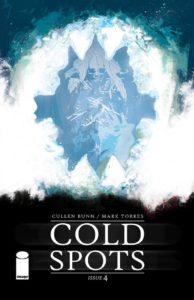 Beasts of Burden — the Evan Dorkin-created multiple-award-winning series about the secret lives of the dogs, cats and other creatures around the community of Burden Hill, who fight various supernatural menaces — is back; the bad news is that it’s without Jill Thompson, the artist on all the earlier stories, but the good is that her replacement is Benjamin Dewey, who showed he could do amazing work with Kurt Busiek’s anthropomorphic animals on Autumnlands, and proves that he can do it with the more-realistic ones here, too.  This new mini-series begins, not with the regular cast of critters, but with the Wise Dogs — the 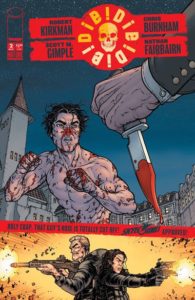 elder, magic-using canines who guard both the animal and human worlds against occult evil — as they deal with a shadowy plot; the more-familiar Burden crew only gets a panel or two of foreshadowing, but will presumably show up later. If you’ve read the earlier issues, you’re already hooked; Dorkin has a knack, essential in fantasy, for making the characters both recognizable, real-world animals and yet beings able to communicate and reason, too, and his decades of comics creating let him use his careful plotting, horror themes and essential optimism to good effect.  Cold Spots is a horror comic, too, from Cullen Bunn, who just finished the well-received and long-running Harrow County.  It follows a missing-person investigator who’s looking for a woman, and her daughter, on behalf of her father; it’s implied that the investigator and the woman had a prior relationship (and, maybe, that the daughter is 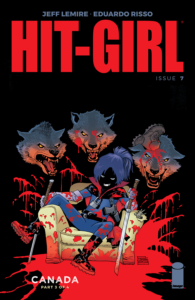 his…), and the trail leads to a coastal community with a mysterious, isolated island offshore, an unusual cold snap, and spirits of the dead, or something resembling them, coming back to haunt the living. Lots of setup and foreboding in this first issue, and a couple of effective scenes, should be enough to bring readers back to see the story unfold over the next few issues.  Die!Die!Die! is Robert Kirkman’s latest, about identical quadruplet brothers whose father was an assassin, and raised them in that art, too; some of them work for one of those shadowy globe-spanning guardian organizations, which doesn’t mind killing people if that’s the only option to help the world. This setup is the excuse for high-action hijinx with a big bodycount and imaginative mutilation; by my count, 15 people are killed on-panel (and a number off), and, trumping last issue where a guy’s nose was cut 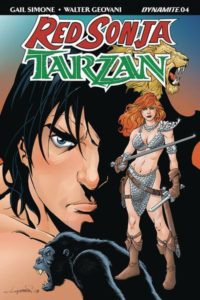 off, here a character cuts his own nose off. You’re either attracted to this cheerful bloodletting or you aren’t, so if that previous sentence made you want to read this (and the first issue, too) then, well, here it is.  Hit-Girl has always followed much the same formula, with its incongruously-innocent-looking preteen girl mowing down mobsters, corrupt cops and other bad guys with an expert’s use of guns, swords, bombs and even-more-imaginative methods.  Here, the big attraction is the Eduardo Risso (100 Bullets; Moonshine) art; his heavily-inked noir style is made for a series like this (and vice versa), and writer Jeff Lemire, who took over from creator Mark Millar last issue, knows just how to give him plenty of hard-boiled characters to draw, and dispatch, stylishly.  Red Sonya/Tarzan continues to be a lot better than you’d think, mostly because of writer Gail 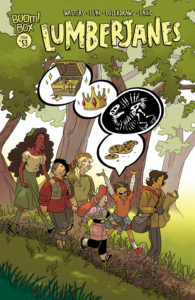 Simone; its stone-cold villain, time-traveling scrambles, and especially the relationship between E. R. Burroughs’ most famous male character, and Robert E. Howard’s most famous female one, are going to make a killer, perpetually-selling trade collection.  Lumberjanes shifts into serious-adventure mode with the first of a two- or three-part story that’s a good sampler issue: we get introductions to all of the cast, and establishment of relationships, during a treasure-hunt plot that resolves into a last-three-page cliffhanger to make everyone come back next month.  That’s solid storytelling, and why this title’s been around for going on five years now, every single month.

With 40 years of experience in comic reading, collecting and reviewing, English Professor Phil Mateer has an encyclopedic mind for comics. Feel free to ask Phil about storylines, characters, artists or for that matter, any comic book trivia. He will post your questions and answers on the AABC blog. His knowledge is unparalleled! He is also our warehouse manager, so if you are looking for that hard to find comic book, ask Phil!
View all posts by Phil →
This entry was posted in New Comics, Reviews and tagged Avengers, Batman, Beasts of Burden, Black Panther, Cold Spots, Die!Die!Die!, HIt Girl, Justice League Dark, Lumberjanes, Mr. and Mrs. X, Punisher, Red Sonya, Redneck, Spider-man, Superman, Tarzan, Terrifics, Venom, West Coast Avengers. Bookmark the permalink.