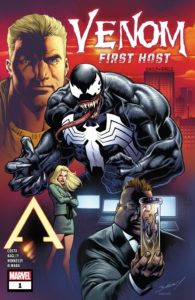 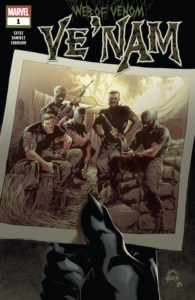 Venom (who’s got a movie looming) and X-books dominate the Marvel offerings this week.  Venom: First Host looks at the alien symbiote’s, yes, first host, a Kree soldier during the Kree-Skrull War, and then updates to the present, and his effect on current host Eddie Brock; the biggest attraction is the smooth, clear art by always-dependable Mark Bagley, but I also like the way writer Mike Costa has Eddie/Venom’s speech patterns down — he has the same peculiarly-menacing rhythms David Michelenie used to 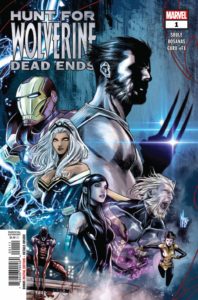 give him back in his earliest appearances.  Ve’Nam is a “Web of Venom” ’60s-set one-shot about S.H.I.E.L.D.’s use of cloned symbiotes during the Vietnam War; things go wrong, necessitating a cleanup crew of Nick Fury and Wolverine. Here, the incentive is the writing, by regular Venom scribe Donny Cates; this book’s a lot darker than First Host, and Juanan Ramirez’s shadowy, horror-tinged art matches the mood effectively.  Of the X-books, Hunt for Wolverine: Dead Ends is really Hunt for Wolverine: Omega, a bookend to the four Hunt mini-series that puts their pieces together and acts as a bridge to the actual 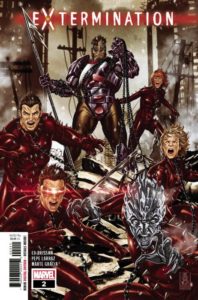 Return of Wolverine #1 in September; unlike those previous series, the title character actually appears in the present day in this (although not much…), and a new villain is introduced, so anyone planning on picking up the Canucklehead’s new ongoing series will want it too.  Extermination continues its mission of rounding up the time-traveling younger versions of the original X-Men (brought over to current Marvel continuity by Brian Bendis five years ago) and, well, get rid of them, clearing the decks for the relaunch of a return-to-basics Uncanny X-Men this November; so far, Ed Brisson is doing a good job of throwing in enough swerves and surprises that, while we 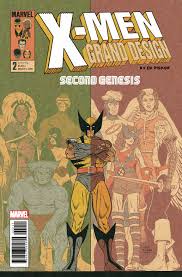 know perfectly well where this is going, we still have a decent time getting there. The most-anticipated X-book this week, though, is Grand Design: Second Genesis, the fourth of Ed Piskor’s fascinating, fannish labors of love encapsulating every x-event between Uncanny X-Men #1 and #300; this issue picks up right after the death of Phoenix in #137 and ends with Storm’s loss of powers in #186.  It’s both weird and addictive: read more than a page, and you get drawn into the rush of events (Doctor Doom! Dracula! Outer space! The Brood! Rogue! Japan!) even if you’re new to them; for older fans, it’s a powerful, and poignant, rush of nostalgia. 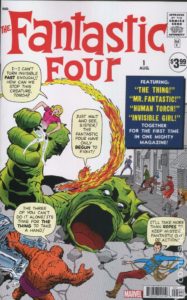 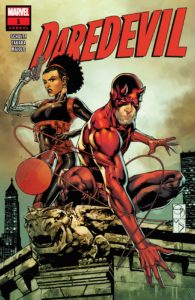 The Fantastic Four #1 reprint Marvel’s offering for $3.99 this week is a nice package: it’s the complete original (including cover and ads) on glossy paper, plus 15 pages of editorial material, including Stan Lee’s original two-page plot synopsis to Kirby, two old Lee interviews about the book, essays from others (including current FF writer Dan Slott), and a cover gallery of other comics’ cover tributes to its iconic monster-from-the-ground image; this book was the beginning of the Silver Age Marvel universe, so if you don’t have a decent copy already, you need it. Daredevil Annual is a Misty Knight/DD team-up set very early in both of their careers, with Misty still a police detective with both arms, and DD a 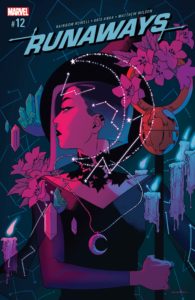 brand-new vigilante still sought by the police. This makes it accessible to both older comics fans and newer fans of the Netflix shows; Misty’s a cool character when done effectively, and both Schultz and Takara do well by her here. Runaways has been quietly excellent during its latest relaunch (probably the best since the original Brian K. Vaughan run), thanks to Kris Anka’s precise, detailed art and Rainbow Rowell’s perfect characterization; this issue, the end of the second volume, is all about the relationships; if you want people punching one another, you won’t like it, but if you want a touching, feel-good story involving the Victor/Gert and Nico/Karolina pairs, with a couple of beautifully-rendered, 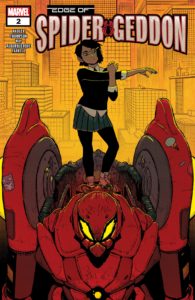 perfect scenes, then it will make you happy.  Edge of Spider-Geddon is for everyone who liked the “Spiderverse” series from a couple of years ago (and now a cartoon); it’s following the same pattern, with a series of one-shots introducing alternate-universe Spidey variations, to be followed by the actual everybody-teams-up mini-series. This installment is a manga/mecha take focusing on Peni Parker, a high-school girl who also pilots a giant Spider-robot suit (the cover, over to the left there, gives you a good idea of its sensibilities); it’s got a surprisingly-high dose of tragedy in it, and does a good job of filling in background on the character so that we care about her when the actual series starts up in a month. 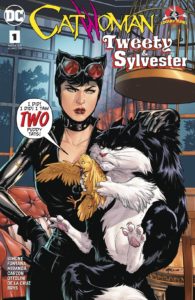 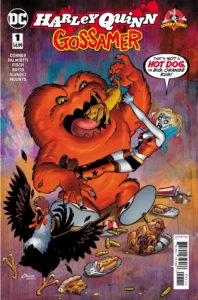 This was mostly a fifth-week-of-the-month skip week for DC, but they released a couple of annuals, and a batch of their Looney Tunes crossovers. Of those, Catwoman/Tweety and Sylvester benefits from Gail Simone’s clever setup, involving a magic-manipulated faceoff between cat- and bird-themed characters (it turns out there are a lot, from Black Canary through the feline-based Starfire through Hawkman and Hawkwoman, Dove, and various tiger, lion and other similarly-based heroes and villains) that’s a lot of slapstick fun. If you’ve never 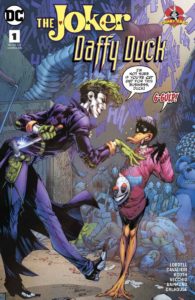 seen any of the cartoons (and, seriously, if you haven’t, you’re culturally deprived…) the dialogue will be hard to read, since both Tweety and Sylvester have prominent speech tics — but that’s true of all the other books, too, from Daffy through Porky Pig; only the mute Gossamer avoids that problem — but as long as you’ve got everyone’s mostly-Mel-Blanc voices in your head, you’ll be fine. Harley Quinn/Gossamer is welcome because it’s by Harley’s former writing team of Jimmy Palmiotti and Amanda Connor; they made her into a consistent star, and her book hasn’t been the same since they left, so any time they return for an episode is cause for 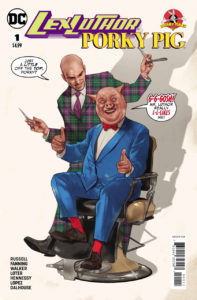 celebration. Joker/Daffy Duck is OK, but probably the weakest of the lot, because Daffy is more in straight-duck mode, with hardly any flashes of the lunacy that’s in his name; Brett Booth’s Joker art is suitably creepy and eye-pleasing, though. That leaves Lex Luthor/Porky Pig; it’s by Mark Russell, who scripted both The Flintstones and The Jetsons, and it has his signature trait of pointed political/social commentary wrapped around a reasonably-fun plot, ths one involving social media and corporate greed: eminently logical, given the characters involved. Finally, the only non-Looney book noted here is Scarlet, a continuation of Brian Bendis and Alex Maleev’s story of a 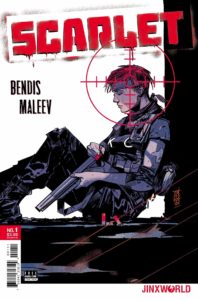 girl in Seattle whose boyfriend is killed by corrupt cops, and who becomes the leader of an Occupy-type movement that gradually becomes a revolution; it’s passionate and predictive (it started before the Occupy movement, in fact), and although it’s numbered as a first issue it actually continues right after the previous volume — but it’s not hard to pick up on the plot, and that Maleev art, gritty and dreamy in equal measure, is always an easy sell (Bendis also mentions in the editorial material that he and Maleev are working on a book set in regular DC continuity, and reprints a number of covers Maleev sent Bendis as “inspiration” — and what’s interesting is that every single cover features Batman…). 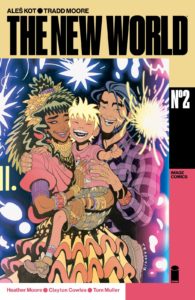 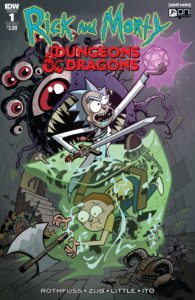 A New World is a dystopian/sf/romance comic, about a young guy who’s a trickster/revolutionary, and a girl who’s a bounty hunter/cop/reality show star; in the first issue, they met and connected when off duty, each having no idea what the other did, and then suddenly the authorities figured out who he was, and she was heading up the arrest-or-assassination team at his door… and then they 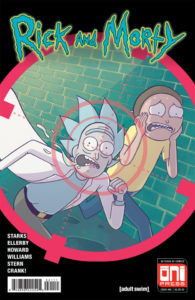 recognized each other. This second issue picks up from there, and it’s very fast-moving, with Tradd Moore’s candy-colored manga/punk art combining with Ales Kot’s smart, love-conquers-all script to zip the story along satisfactorily. Rick and Morty is obviously a big seller  for Oni, since they keep launching special issues and mini-series to piggyback on it; this week, there’s Rick and Morty vs. Dungeons and Dragons, with Morty wanting to learn how to play to impress a girl (insert your own joke there…), and it turning out that Rick is an old-school dice jockey.   Of course, alien virtual reality and death end up involved, 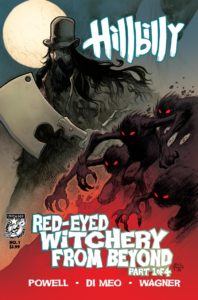 but at its heart this is a love letter to the game (it could have been an episode of Knights of the Dinner Table). The regular issue is unusual in that it’s a multi-parter, and draws on continuity from previous issues, with a Rick Revenge Squad showing up to wreak havoc; Mr. Poopybutthole (don’t ask…please don’t ask…) acts as master of ceremonies, introducing the story and detailing the previous issues where each character appeared, and there’s the same mix of action, cynicism, nihilism, humor and humanity that’s made the show, and the comic, such a cult 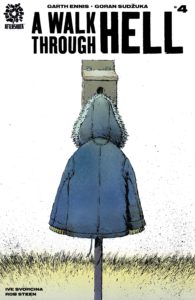 success.  Hillbilly, Eric Powell’s backwoods, cleaver-wielding witch and demon fighter, is also offering an extra mini-series this week, written by Powell but drawn by Simone di Meo; it’s the usual mix of occult antagonists and righteous violence, with a meteor supplying the title menaces, and fans of the regular series should be pleased by it.  A Walk Through Hell is mostly backstory this issue, with Shaw explaining to her partner how a previous case involving a serial child killer might connect to their current title predicament; as always with Ennis, there are a couple of WTF? shocks, and setup for presumably even-more-horrific revelations later, with his usual brand of grimly-entertaining adventure.

With 40 years of experience in comic reading, collecting and reviewing, English Professor Phil Mateer has an encyclopedic mind for comics. Feel free to ask Phil about storylines, characters, artists or for that matter, any comic book trivia. He will post your questions and answers on the AABC blog. His knowledge is unparalleled! He is also our warehouse manager, so if you are looking for that hard to find comic book, ask Phil!
View all posts by Phil →
This entry was posted in New Comics, Reviews and tagged Catwoman, Daredevil, Extermination, Fantastic Four, Harley Quinn, Hillbilly, Joker, Looney Tunes, New World, Rick and Morty, Runaways, Scarlet, Spider-Geddon, Venom, Walk Through Hell, X-men. Bookmark the permalink.