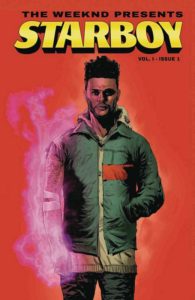 The Weeknd Presents Starboy looks good, and has style; as a comic inspired by the title of that singer’s last album, it’s also a mashup, with a “mega city” out of Judge Dredd,  a Gotham-Cityish police commissioner plagued by a bad guy with the on-the-nose name of “Jack Smiley,” and a good guy whose origin is out of Captain Atom by way of Watchmen: the kind of thing a twenty-something who’d read a lot of comics would write.  Creator Abel “The Weeknd” Tesfaye isn’t just any geeky guy, though; he obviously knows a lot about secret identities, and has veteran comics scripter Christos Gage backing him up, so this has enough energy to pull it 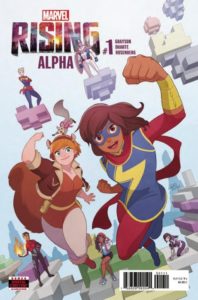 through the cliches, and should make his fans happy.  Thor may have a new artist, and see the return of the Odinson as the title character, but it’s not a relaunch or reboot: it’s still by longtime writer Jason Aaron (who’s seen it through six “first issues” before this one), and follows the same “War of the Realms” plot, so despite that “#1” it’s the same book it’s always been. That’s fine, though, because the Aaron era has offered consistently entertaining and thoughtful stories, and artist del Mundo’s candy-colored, fantasy-drenched style turns out to be a good match for them.  Marvel Rising kicks off a kid-friendly crossover between Squirrel Girl and Ms. Marvel, with those two Scholastic Book Club heavyweights battling an online gaming enthusiast who 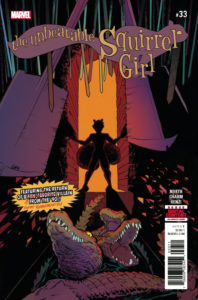 can make her virtual characters real; the story starts here, goes into two team-up issues by Squirrel Girl regular writer Ryan North and Ms. Marvel regular writer G. Willow Wilson, and then finishes with an “Omega” one-shot. There are a lot of early-teen and younger readers out there who really relate to those characters — and deservedly so — and this would make a good gift for them.  Squirrel Girl itself misses departed artist Erica Henderson’s unique style, but Derek Charm continues to acquit himself well as her replacement; he’s aptly named, since “charm” has always been this book’s superpower.  This week’s issue 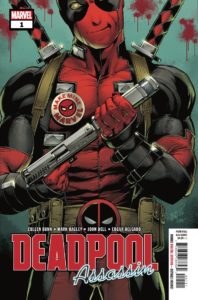 demonstrates that, along with  Doreen’s problem-solving during a murder-maze adventure; her unlikely friendship with Kraven the Hunter, and attempts to defuse a confrontation between him and an understandably-hostile police force, show why she’s such a refreshing, and popular, heroine.In Deadpool: Assassin, old pros Cullen Bunn and Mark Bagley produce a perfectly-competent first chapter of Marvel’s motor-mouthed mercenary’s latest adventure.  Bagley, especially, makes it worth a look; he’s one of those clear, simple, always-watchable artists, like Sal Buscema or Dick Dillin, who’s never particularly flashy, but has drawn hundreds of characters over a long career, and made them all look good. 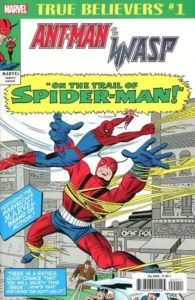 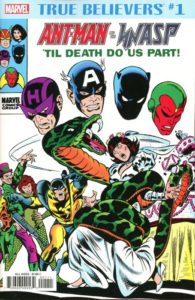 Two more of Marvel’s special “True Believers” dollar comics reprinting Ant-Man and the Wasp stories —  “On The Trail of Spider-Man” is from Tales To Astonish #59, by Stan Lee and Dick Ayers (with a seven-page Wasp backup story plotted by Lee and written and drawn by his brother, 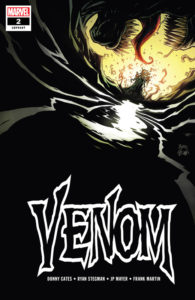 Larry Lieber), and is a good example of mid-’60s B-list Marvel output, while “‘Til Death Do Us Part” is from Avengers #60, by Roy Thomas and John Buscema, and is late-’60s A-list stuff; it’s also a good example of how compressed comics storytelling was back then: the twenty pages here cover about the same story ground that, say, the upcoming Batman/Catwoman wedding has taken close to a year to tell — and for only 12 cents! Venom continues its new arc under red-hot writer Donny Cates, with a cosmic- 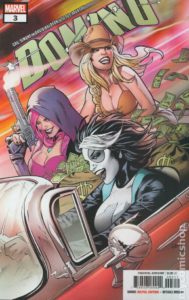 alien-horror tone that works well with the character (doing a Lovecraftian C’Thulhu bit with Venom is one of those “of course” ideas that Cates seems to come up with frequently); Ryan Stegman’s art strikes just the right notes of looming catastrophe and shadowy tension, and just two issues in this already looks like a hit. Domino may have some heat, too; it’s a female buddy movie, a Thelma and Louise for the #MeToo era, but with super-powers, mercs and a lot more bullets: exactly the kind of comic Gail Simone’s been good at for over a decade, and still early enough in its run to get all three issues off the stands and see if you like it. 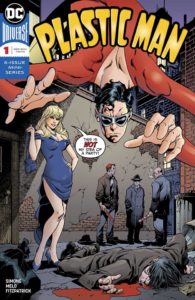 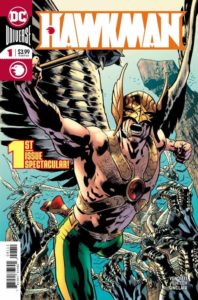 Plastic Man‘s by Gail Simone, too.  DC’s never quite known what to do with Plas (his creator, Jack Cole, did, but that was a very long time ago), trying him in standard-superhero, humor and other genres, with Kyle Baker’s elastic line and slapstick plotting  forming the best 21st-century version. Simone uses a noir/hero/humor mix, heavy on the first and lighter on the other two;  Plas’s original mob background figures prominently (and she gets points for using the phrase “You putrid punks,” which was in his very first story), and there’s a murder mystery with possible ties to the caped community. This is a six-issue mini-series, so it’s both good and short enough to be worth at least a quick look.  Hawkman uses an Indiana Jones/cosmic menace combo for its first story; when Bryan Hitch is your artist, all you need to do is give him plenty of cool things to draw and get out of the way, and scripter Robert Venditti does that here 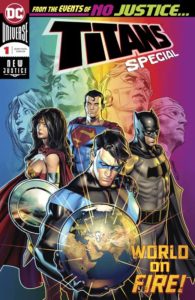 (he gets his own points — of the Silver Age variety — for including winged gorilla guardians in the mix): leaf through this on the stands, check out the art (especially the various splash pages), and it should be an easy sale. Titans Special is a double-size issue resetting the regular title’s team and mission: since the events of Dark Night: Metal, energies from the shattered Source Wall are flooding earth, igniting super-powers in people with the metagene and generally causing chaos. Dick Grayson and the JLA agree that somebody needs to be helping the panicked emergents (you can see why they wouldn’t want to call them “mutants…”) and so he pulls together a League-sponsored Titans team to do just that: a mix of the old (Raven, Donny Troy, Beast 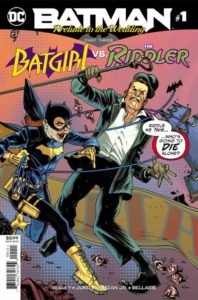 Boy) and the newer (a metal-clad Natasha Irons and a couple of others). As a build-the-band issue, it’s fine —  a lot of artists and colorists worked on this, but because of the episodic nature of the plot it hangs together reasonably well anyway — and fans of the current Titans (or any of its previous incarnations, including Teen Titans) will definitely want to read it.  Will it invigorate the main title? Tune in over the next couple of months, and see.  The Batgirl vs. Riddler Batman wedding special continues the series of one-shots running up to that big event; it offers an OK battle of wits between those two longtime foes, gets Barbara’s character right, and sets up the over-story’s next chapter well, so bat-fans should find it entertaining enough. 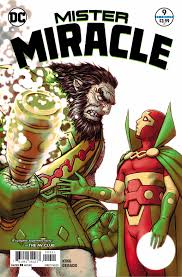 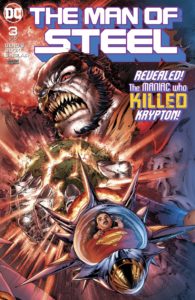 negotiating treaty terms with Kalibak and other agents of Apokalips; as always with Tom King, the fun — and the drama — is in the small conversations and bits: Granny Goodness’s mirror, Kalibak’s reading glasses, and the twist at the end, where Darkseid doesn’t appear, but springs a very clever trap. If you like straight-ahead punch’eminnaface superhero stories, this will frustrate you, but if you like deeper and weirder tales, this is still the best comic of the year.  Man of Steel sees the new Krypton-killing bad guy breaking into the Fortress of Solitude and doing some major damage — to one item in particular — 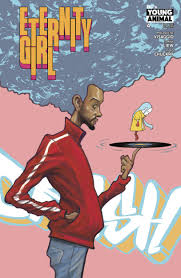 and continues to be a solid debut for writer Brian Bendis, with a clear, recognizable voice for Superman, and enough curves to keep readers interested, especially at its one-issue-a-week pace.  Eternity Girl, surreal since its own first issue, ups the weirdness quotient even more, with Magdalena Visaggio giving artist Sonny Lieu a chance to show off a number of different styles (including two pages done as if they were a series of Sunday comic strips by Charles Schulz); it’s using its mini-series format to craft a story about depression, fatalism and purpose, but doing it with enough style and grace to make its themes subtle, quietly hopeful and never, ever boring. 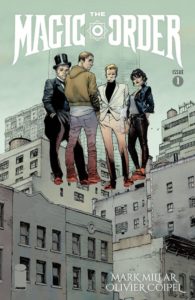 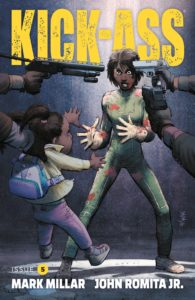 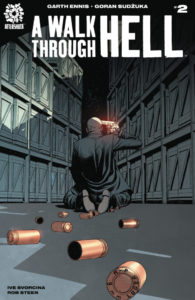 The Magic Union is an absolutely typical Mark Millar comic: if you like his good qualities (he always attracts good artists, and knows how to construct a solid, crowd-pleasing story) and don’t mind his bad ones (the “crowd-pleasing” part often leads to predictability, and his absurdly-powerful bad guys get beat easily because of some planted plot trick,

or just the refusal of the heroes to give up), then you’ll like it; if not, not.  Kick-Ass is much the same: it continues to benefit from the John Romita Jr. art, and this week’s penultimate issue of its first arc has the heroine and her toddler daughter facing impossible odds, against one of those self-satisfied, ultra-prepared Millar villains; damned if it doesn’t make you want to tune in next month to see how she escapes. Garth Ennis has two comics out this week, too: A Walk Through 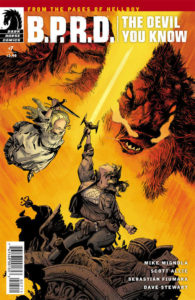 Hell is a horror book, following two FBI agents who enter a mysterious warehouse where very very bad things are happening — quietly bad things, at least for Ennis; right now this is a tale of creeping dread, and not of buckets of blood, although it’s probable that will change. As long as the actual menace lives up to all that dread…. World of Tanks is about WWII’s 1943 Battle of Kursk, between German and Russian tank crews, and is as carefully-researched, character-rich, even-handed and

fascinating as all of Ennis’s war work. B.P.R.D. is worth noting because it’s co-written by Mignola and has Hellboy back; its having published over 150 issues says a lot about the staying power of that universe. I Hate Fairyland continues Skottie Young’s punch-up of fantasy conventions; if all you know of 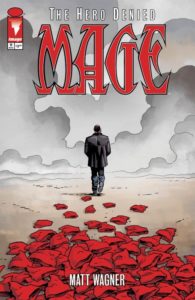 him is that he draws those cute-kid alternate superhero covers, then this cynical, ultraviolent (but still cartoony) anti-Wonderland tale will be a revelation.  Finally, Mage hits the sixty-percent mark in its trilogy-concluding story about a regular married guy with two kids who’s actually the reincarnation of King Arthur.  Matt Wagner’s bold, simple style should draw in first-timers, while the rest of us make plans to read the whole 45-episode life story, told over thirty years, when the final issue comes out in a few months, and see how it all hangs together.

With 40 years of experience in comic reading, collecting and reviewing, English Professor Phil Mateer has an encyclopedic mind for comics. Feel free to ask Phil about storylines, characters, artists or for that matter, any comic book trivia. He will post your questions and answers on the AABC blog. His knowledge is unparalleled! He is also our warehouse manager, so if you are looking for that hard to find comic book, ask Phil!
View all posts by Phil →
This entry was posted in New Comics, Reviews and tagged A Walk Through Hell, Ant-Man, B.P.R.D., Batman, Deadpool, Domino, Etermity Girl, Hawkman, Hellboy, I Hate Fairyland, Kick Ass, Mage, Magic Order, Man of Steel, Marvel Rising, Mister Miracle, Plastic Man, Squirrel Girl, The Wasp, The Weeknd, Thor, Titans, Venom, World of Tanks. Bookmark the permalink.