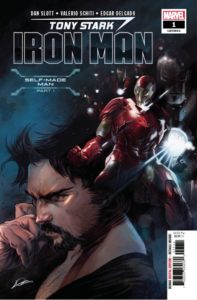 Longtime Marvel writer Dan Slott starts his new gig on Iron Man this week, and also publishes his last Amazing Spider-Man story after nearly a decade (and a total of 180 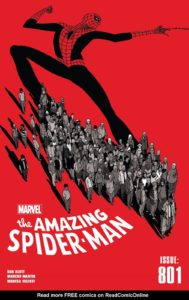 issues) on that title. The Iron Man is a classic first issue: follow a newbie hired by Tony as he’s given a brisk tour and rundown of Stark Unlimited’s tech and business wizardry, while showcasing all the cool future-type stuff the company does and introducing the supporting cast (including a couple of familiar faces); meanwhile, Stark’s armored alter ego fights a massive foe and shows off his multi-platform super-hero chops, and there’s a last-page reveal of the longtime bad guy (no, not the Mandarin) behind the scenes: it’s fast-paced, crammed with information and character bits, and does its job of making readers want to come back for more next issue. Amazing Spider-Man #801 is a coda and summation, not 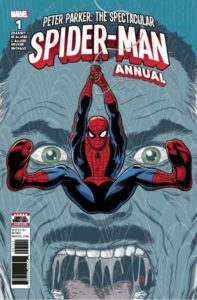 an introduction: it’s a one-shot tale, a break after the long arc that ended in issue #800, told from the perspective of a guy Spidey helped early in his career, and tries to show why the character’s so important. It does, too — especially with Marcos Martin and Muntsa Vicente adding their sleek, modern bright-colored art to it; there’s even a graceful, and grateful, two-page farewell from Slott on the letters page. Another worthwhile Spider-book is Spectacular Spider-Man Annual #1, largely because it’s drawn in Michael Allred’s bold Silver Age-ish style; it focuses on J. Jonah Jameson’s long and checkered association with the webhead. If Allred isn’t enough of a lure, there’s also a seven-page backup story drawn by Chris Bachalo; those two should be enough 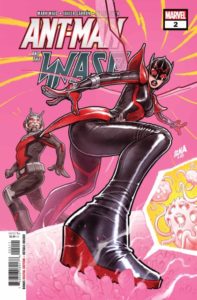 to tempt any serious comics fan. 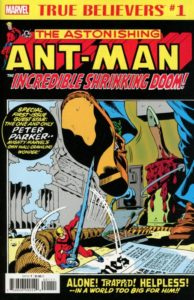 Two hat-tricks from Marvel this week: Mark Waid has three comics out (again), and Ant-Man has three titles with his name in them (again).  Ant-Man and the Wasp (meaning Scott Lang and Nadia Pym Van Dyne) picks up on the cliffhanger from its first issue, with that pair lost in the 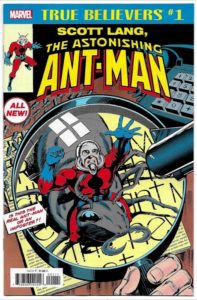 microverse; the effective character interplay between them, and the quirky-looking aliens from Javier Garron, make it worth keeping. Of the True Believers one-dollar reprints, Incredible Shrinking Doom reprints the first issue of Hank Pym’s early-’70s run in Marvel Premiere #4, in which he shrinks down, has a team-up with Peter Parker/Spider-Man, and then can’t get back to normal size; the rest of the run becomes a long quest for him to find a cure. The Scott Lang: Astonishing Ant-Man, from a couple of years later, reprints the first solo story of that second-generation version of the character, in Marvel Premiere #47, by the all-star team of David Michelinie (who’d used Lang while he was writing

Iron Man), John Byrne and Bob Layton; getting both of these seldom-reprinted Bronze Age keys for $2 is by far the best deal of the week.  Meanwhile, Waid continues to dominate Marvel’s new-comic output; Doctor Strange sees a magic-depleted Doc in outer space, searching for manna on other worlds and looking to consult with other magicians, but running into difficulties (the aliens here are just as carefully alien as the ones in Ant-Man and the Wasp, but totally different too — a tribute to Waid’s skill at this stuff), while Captain America, set a hundred years in

the future, has a father and son who are descendants of Steve Rogers fighting both an accidentally-revived, cosmic-cube-fueled Red Skull and a Kree/US government conspiracy.  Waid’s writing has always attracted first-tier artists, and these two books are no exception –both tell a clear story, with Saiz’s more-realistic adventure-strip style meshing with Doctor Strange’s sf/fantasy plot, while Leonardo Romero’s simpler composition and bright thin lines echo his predecessor Chris Samnee — or this week’s Marcos Martin –as this volume of the character concludes. Coming July 4th:  Ta-Nehisi Coates’s Captain America relaunch…

X-Men Gold #30 is the “wedding” issue, with Kitty Pryde and Colossus having the ceremony they’ve been building to for the last six months… or is it? There is a ceremony, and the two newlyweds will spin off into a Mr. and Mrs. X series, but you’ll have to read the comic to see exactly what happens (one clue: the writer of the spin-off series is Kelly Thompson, and that turns out to be a much more obvious choice than it might seem at first…). The art requires a lot of character work, since the issue is mostly talking, and David Marquez 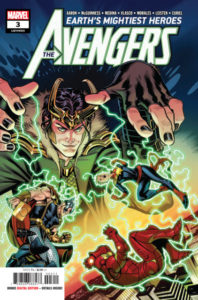 and Matthew Wilson do some great work with all the expressions and body language needed to make it clear, emotional and interesting, despite the lack of super-villain fights to mar the ceremony. Avengers #3 has a lot of Loki in it; is he trying to help the big and powerful-ass Dark Celestials destroy the Earth, or playing a more complicated game? Fortunately, Jason Aaron has been writing the trickster god over in Thor long enough to have his character down exactly, so it’s fun watching all his maneuvering — and, since all of this ties into Aaron’s earlier “Avengers of One Million BC” storyline, it’s just the kind of widescreen, pyrotechnic epic that you’d expect for the first arc of this relaunch of Earth’s mightiest heroes. 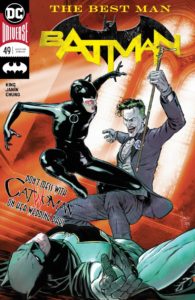 Batman, as its cover up to the left there suggests, is a Joker/Catwoman fight — although it turns mostly into a conversation, as both lie gravely wounded.  That’s good, though, since Tom King shines at the little side comments and small character bits that a lot of other writers ignore. Read this because it’s DC’s best-selling ongoing series, and because what happens here might offer some clues about whether the Bat-Cat wedding next issue (*begin plug*) out 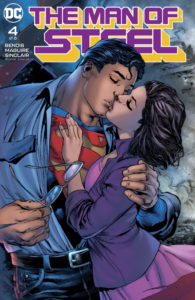 on Wednesday, July 4, the day of All About Books and Comics’s annual Great Big Sale (*end plug*) will, like the one in X-Men Gold, turn out differently than we may have been led to expect.  Prelude to the Wedding: Red Hood vs. Anarky continues the series of bat-cast one-shots leading up to the event, with Jason trailing Selina’s bachelorette party and dealing with the inevitable super-villain crashers; it was a good idea to have one writer, Tim Seeley, do all of these tie-ins;  it gives them a smooth continuity and plotline that they otherwise might have lacked.  In other super-friends news, the Man of Steel weekly mini-series

continues, with a big fight between Clark, Kara and the apparently-Krypton-destroying new Bendis bad guy; while the fight’s fine, it’s a smaller two-page conversation between the antagonists at the end that lingers in the memory, adding hope that Bendis may be just the right writer for the super-books after all. Meanwhile, Justice League’s relaunch continues writer Scott Snyder’s blending of old and new: there are ’70s-animation flashbacks like a new Hall of Justice, accompanied by a reconstituted Legion of Doom, but everyone’s motivations and relationships — especially Lex Luthor’s — are considerably more complicated.  Since 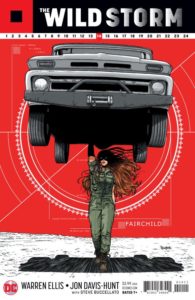 this is only the second chapter of a six-issue arc, there are a lot of crises and moving parts; it’s all clearly conveyed, though, with Snyder and artist Jorge Jimenez making it fast-moving and exciting. The Wild Storm continues Warren Ellis’s remaking of the Wildstorm universe, with the two shadowy organizations IO and Skywatch fighting an increasingly-uncovert war for control of the planet; for old Gen13 fans, there’s also a spotlight/origin of sorts for the Fairchild family, all in the combination of light and very dark character traits, and hard-sf explanations of otherworldly abilities, that you’d expect from the writer of works like Planetary, Global Frequency and Transmetropolitan 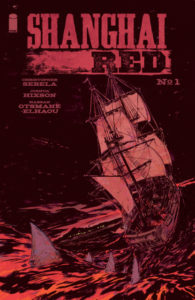 Shanghai Red is about a, duh, shanghaied sailor in the late 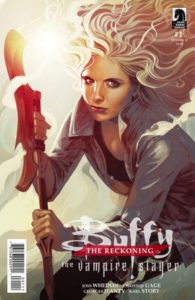 1800s who kills the crew that did the shanghaiing, frees the galley slaves and turns the ship back to its original port in Oregon, looking for further revenge; it reads like it’s by someone who was a fan of, say, Terry and the Pirates or similar tales, and it’s got a couple of decent twists, with art and coloring that’s effective enough to get me back for the second issue. Buffy the Vampire Slayer starts its “Season 12” arc with a new first issue, but this book’s been around long enough — and with the same sometimes-rotating creative crew — that everyone should know by now if they like it or not; if you’re one of the minority who’s never seen it… well, this is a good place to start, with enough recap to bring you up to speed.  Rick and Morty Presents continues its series of one-shots 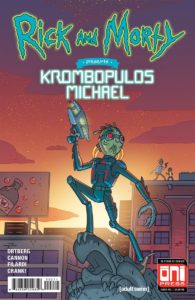 spotlighting various characters from the rickandmortyverse.  Krombopulos Michael is maybe the most skilled assassin in the multiverse, not least because he loves his job so much, and pretty much all he does is tell people that, kill them, and try to hang out with Rick, whom he looks up to as a mentor and arms salesman; he’s like one of those sort-of friends who’s kind of pushy and creepy about it, and too socially awkward to realize why he’s off-putting — but, of course, no one wants to make him mad or depress him, because trained assassin and all, so they suffer his attention and hope he goes away. He’s a surprisingly poignant if one-note character, which makes this one issue just enough to tell his tale. 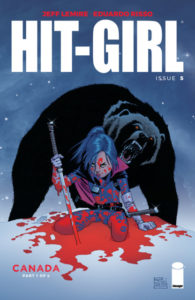 Gideon Falls is a horror comic that, in this issue, finally adds backstory about the mysterious black barn, a supernatural appearing/disappearing structure that’s been plaguing the title community for centuries; if you haven’t been reading earlier issues, it’s a good place to start, to see if you’re as impressed with Jeff Lemire and Andrea 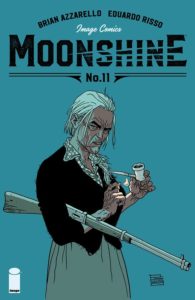 Sorrentino’s careful plotting, vivid characters and, especially, their air of creeping dread as the rest of us. Hit-Girl kicks off a four-part adventure with H-G going after mobsters in Canada, and does it without writer/creator Mark Millar or previous artist Ricardo Ortiz — that’s not the problem you’d expect, though, because the new team is Jeff Lemire (again) and, of all people, Eduardo Risso, whose noirish style is a big contrast to Ortiz’s more-cartoony one, and turns out to be a great fit for this comic’s blood-soaked sensibilities; this new team might convince 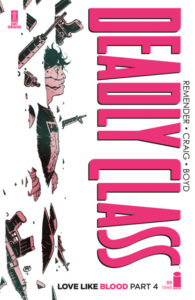 new readers to come back for more. Risso fans also get another issue of his and Brian Azzarello’s Moonshine; it’s the penultimate one, and, after some slow plot build-up over the last few episodes, it lets him loose on lots of werewolf-fueled resolution that’s very… well, they’re too ink- and violence-drenched to be

“pretty,” but they sure look good.  Deadly Class ends its seventh volume with a violence-fueled resolution, too; although the central theme is about not giving in to those impulses, a lot of people in the book do it anyway; there’s a cast-member death, a shift in alliances, and the high quality that’s been a feature of this series since it started: it’s no surprise that it’s been optioned for a TV series, too.  That leaves Usagi Yojimbo; I usually put it at the end, because it’s such a perfect comic: anthropomorphic ronin in feudal Japan, without a line wasted or out of place. Buy it and see.

With 40 years of experience in comic reading, collecting and reviewing, English Professor Phil Mateer has an encyclopedic mind for comics. Feel free to ask Phil about storylines, characters, artists or for that matter, any comic book trivia. He will post your questions and answers on the AABC blog. His knowledge is unparalleled! He is also our warehouse manager, so if you are looking for that hard to find comic book, ask Phil!
View all posts by Phil →
This entry was posted in New Comics, Reviews and tagged Ant-Man, Avengers, Batman, Buffy, Captain America, Catwoman, Deadly Class, Doctor Strange, Gideon Falls, HIt Girl, Iron Man, Justice League, Moonshine, Rick and Morty, Shanghai Red, Spider-man, Superman, The Wild Storm, Usagi Yojimbo, X-men. Bookmark the permalink.