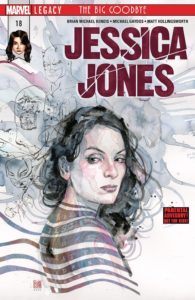 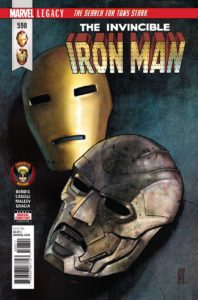 Jessica Jones is Brian Michael Bendis’s (and Michael Gaydos’s) fond farewell to their creation, whose first appearance was almost 17 years ago, and whose adventures Bendis has been chronicling ever since, in one way or another; at this point, Jessica’s far from the embittered, traumatized tough-gal P.I. of her earliest stories (and of the Netflix series), and this stand-alone story, where she has to track down a C-level super-villain because his girlfriend loves him and wants to redeem him, is a perfect example: it’s got the noir/superhero combo, the dialogue, and the stubborn humanism (even 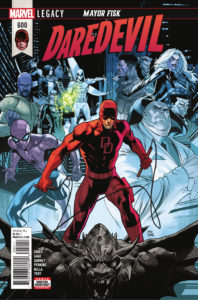 in the guy who’s part armadillo) that have made the character work from the beginning — and, given the writer’s afterward, I think it’ll count as his official goodbye. That doesn’t mean it’s his final comic, though — Iron Man #598, as you can guess from its numbering, has another two issues after the current one, all culminating in Tony Stark’s return, and the current issue follows both that and the Victor von Doom subplot (Doom against the Hood and his legion of super-villains, courtesy of Alex Maleev), while managing to integrate its heroine, Riri, with Mary Jane Watson and Tony’s mother as a Stark triumvirate that ought to stay a solid supporting cast even after Bendis leaves. Daredevil makes it to its own anniversary issue, #600, this week; it’s 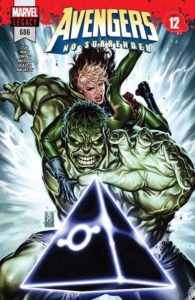 a good-enough tale of the Kingpin as mayor of New York, waging a war on the heroes, and stays reasonably close to the spirit and tone of that Netflix series, too, but follows the new tradition of not so much concluding a long-running plot in the special double-sized issue as extending it, leaving readers on a cliffhanger that they’ll now have to buy the next regular issue to see resolved. That’s an understandable (from a marketing perspective) but frustrating development, although caring enough

to complain about it indicates that it’s accomplished its goal. Avengers continues its now-75%-through weekly combination of all the previous Avengers titles, with major resolutions for parts of the main story, but plot twists that create new complications: just about where it should be at this point, and entertainingly told. Black Panther follows a similar arc, with the main story, a battle between the Panther and Klaw (the super-powered, sound-possessed comics version), getting resolved just as the B story, with Storm and Okoye looking for the source of Wakanda’s troubles in another dimension, revs up; Coates has at this point achieved a good mix of story and subplot and subtle theme that ought to keep this title viable for a long time. 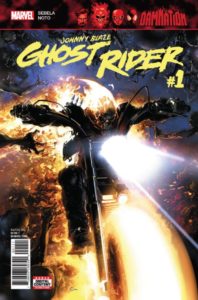 Champions concludes its current arc, and, as with Jessica Jones, its creative team — Mark Waid and Humberto Ramos — is leaving too. They’ve crafted a very readable series, with a lot of both humor and careful characterization (not that easy with all the young-teen members of the group), and this finale, which sees one member leaving, another joining and a third reverted, is a good place to check in and see the result of their 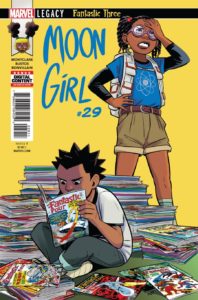 efforts: given the real world’s current focus on high-school kids fighting to change the world, it’s definitely leaving the next creators with a solid, sometimes-inspiring foundation. Ghost Rider is a one-shot spinoff from the Doctor Strange-centric Damnation series, involving the original Ghost Rider, Johnny Blaze, dead (he was defenestrated by Mephisto in the current issue of Damnation), in hell, and separated from the Spirit of Vengeance; this means the two of them have to team up to survive, and the outcome is… interesting, a change in power that may or may not have ramifications for the rest of the Marvel universe. but offers a

reasonable amount of demonic fun in getting there.  Moon Girl sees Lunella continuing to hang out with Ben Grimm and Johnny Storm, playing Reed Richards in a Fantastic Three setup; that’s OK, but the real attraction, especially for fans, will be the last page, which sees the return of a familiar crimson character that artist Natasha Bustos draws better than anybody this side of Jack Kirby.  Moon Knight, meanwhile, concludes its own current arc, the first one by this creative team; it’s bloody, fast-paced fun, especially considering that Jason (Crossed) Burrows draws crazy and violent better than almost anyone; if you liked the Garth Ennis/Steve Dillon Punisher (or, for that matter, the Becky Cloonan/Dillon one), then give this a try. 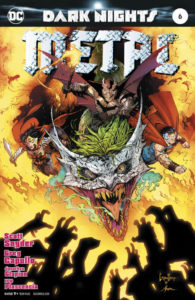 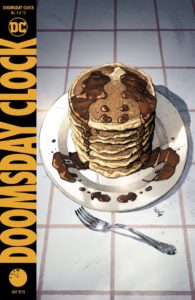 It’s a week for endings: DC’s Dark Nights: Metal concludes, with a 44-page, no-ads story that manages to resolve all the cliffhangers, account for the dozens of new and old characters involved, offer some great-looking splash pages for Greg Capullo, wrap everything up neatly,

and finish with an epilogue that resets and expands the universe, and should make friends of the old JLA Super Friends cartoon very happy. Doomsday Clock is only one third of the way through its story, and already increasingly behind schedule; this issue doesn’t move the story forward very much, because it’s an origin for the “new” Rorschach character — but it dovetails neatly enough with its Watchmen source material, is effective at bringing us up to date, and really lets us appreciate how well Gary Franks’s art meshes with the old 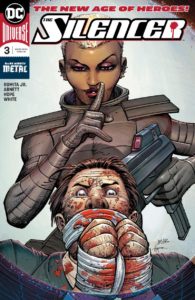 familiar nine-panel grid and Dave Gibbons-crafted original versions of these characters. Ruff and Reddy concludes its Hollywood-centric satire in fine form, with longtime industry insider Howard Chaykin making even these cartoon characters feel real, as they each escape the Tinsletown grind and get a little happiness, have it snatched away, and then end on notes both good and bad: that’s show biz, indeed.  Of the two newly-debuted series, Silencer continues to get by on John Romita Jr.’s art; the only quibble is that, with its young African-American woman lead and generous 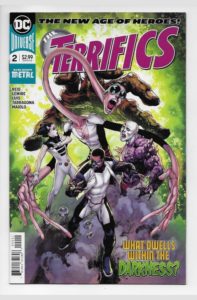 helpings of violence, it looks a lot like the new Kick-Ass — but both of those series are very good-looking thanks to him, so it would be churlish to complain about too much of a good thing.  The Terrifics, by the end of this second issue, has its new team — Mr. Terrific, Phantom Girl (well, a Phantom Girl), Metamorpho and Plastic Man — together (whether they want to be or not, thanks to writer Jeff Lemire’s use of an old-but-still-effective plot device); last issue’s cliffhanger involving an old Wildstorm/ABC character isn’t resolved, but looks like it will be the plot driver for awhile, and the team’s powers and personalities are intriguing enough for readers to stick around and see what happens next. 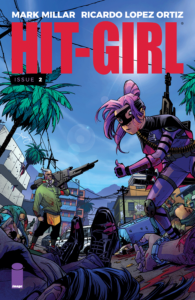 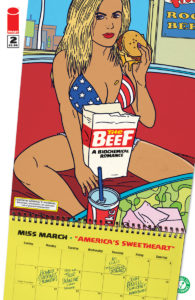 Hit-Girl suffers a little because it’s not by Romita Jr., but Mark Millar is still the writer, and artist Ricardo Lopex

Ortiz, who has a manga-influenced, semi-comic style a little like Jim Mahfood’s, is able to handle the book’s combination of ultra-violence and sly humor well enough.  The Beef is a kind-of Hulk knockoff, about a slaughterhouse worker whose ingestion of chemically-altered red meat inadvertently turns him into a monster under stress; Shaky Kane’s Kirbyish layouts and faux-primitive art give it a weird, headlong energy. Redneck, nearing the end of its second story, offers one big twist and one half-expected return, plus a bunch of Texas-style 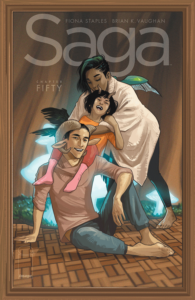 vampire violence; I’d thought that Donny Cates’s Marvel work would mean he’d have to give up this title, and am glad to see it seems like it’s going to keep going; it’s been dependably entertaining. Triple that for Saga, celebrating fifty issues of its space-opera family romance; Vaughan and Staples know exactly how to mix their own plot twists with startlingly human moments (like the sex scene that kicks off this issue: dirty as hell, and yet it’s almost all done in words and implied action; Fiona Staples’s art is practically G-rated) 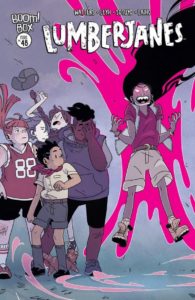 and a combination of feel-good and oh-crap developments that keep readers on their toes, and the pot boiling merrily; that’s how you get the audience to keep coming back for five years.  Lumberjanes is also closing in on the 50-issue mark; its tale of sort-of Girl Scouts in a summer camp in a mysterious, sometimes-magical forest looks and feels very different from Saga, but it’s got some of the same mix of relatable characters, fantasy and adventure, and the comics field is richer for having it around – especially for younger

readers. Rick and Morty looks like it’s for younger readers, too, but if you’ve ever seen the show you know that’s deceptive: its mix of mind-bending sf, darkly-cynical worldview, gleeful violence and slapstick humor requires more sophistication than that. At 36 issues, the comic now has more episodes than the cartoon, and the quality is surprisingly close to it. This issue focuses on the perpetually-put-upon loser Jerry, following an increasingly-bloody day in his life; it doesn’t have the Rick/Morty dynamic, or the angst of the previous Beth or Summer spotlight stories, but if you like Three Stooges-style, finger-in-the-eye (and sometimes all the way through to the brain) comedy, you should appreciate it.

With 40 years of experience in comic reading, collecting and reviewing, English Professor Phil Mateer has an encyclopedic mind for comics. Feel free to ask Phil about storylines, characters, artists or for that matter, any comic book trivia. He will post your questions and answers on the AABC blog. His knowledge is unparalleled! He is also our warehouse manager, so if you are looking for that hard to find comic book, ask Phil!
View all posts by Phil →
This entry was posted in New Comics, Reviews and tagged Avengers, Black Panther, Champions, Daredevil, Dark Nights Metal, Doomsday Clock, Ghost Rider, Hit-Girls, Iron Man, Jessica Jones, Lumberjanes, Moon Girl, Moon Knight, Redneck, Rick and Morty, Ruff andf Reddy, Saga, Silencer, Terrifics, The Beef. Bookmark the permalink.