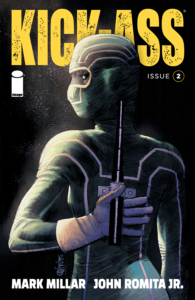 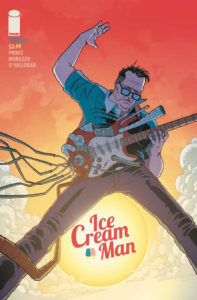 We’re starting with the indy books this week, largely on the strength of Image’s six: Kick-Ass has the crowd-pleasing

collaboration of Mark Millar and John Romita Jr. offering new twists (an ex-military single mom putting on the costume, at first to rip off the mob) on their sleek, always-entertaining franchise. Ice Cream Man‘s first two issues were one-off horror stories, with its mysterious, metamorphic entrepreneur acting as the hand of fate (or judgment) for the main characters. There, he seemed demonic, but this third issue, about an aging one-hit-wonder ex-rock star, is more of an sf fantasy, and here he 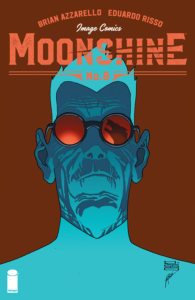 seems more benign. Is that world-building or inconsistency, a feature or a bug? It’s all interesting enough to keep me reading to find out.  Kill or be Killed has its hero stuck in a mental hospital, where he no longer sees a literal demon demanding that he kill people, but has decided that maybe the world needs a vigilante to eliminate the bad ones anyway. What’s really happening? Don’t know, but Brubaker and Phillips do, and their skillful hard-boiled style and past successes make it easy to just read along, appreciate the main character’s 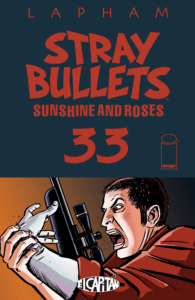 bloody-mindedness and grim wit, and trust them. Moonshine has a similar well-oiled team in Azzarello and Risso (if you want to feel old, consider that their ground-breaking 100 Bullets will be marking its 20th anniversary next year), and watching Risso draw gangsters, Appalachian grotesqueries and werewolves never gets old — or, at least, hasn’t yet, eight issues in.  Stray Bullets, dozens of issues into its own long-running noir tale, focuses on Kretch, who’s as sociopathic as that guy Steve Buscemi played in Fargo, and 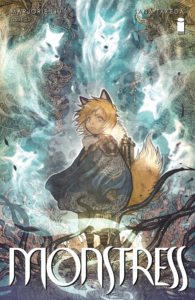 goes through just about as many physical indignities here (although they’re self-inflicted…); read this to appreciate Lapham’s skill at playing off a large, memorable cast against a sprawling, Faulknerian plot, keeping this plot going for almost three years now, and still making each issue a self-contained, satisfying story. After all those crime/suspense comics, Monstress offers an entertaining alternative: manga-influenced high fantasy with Lovecraftian overtones; fifteen issues in, Sana Takeda’s art has grown as lush and exotic as a rain forest, and Liu gives her fox girls, mystic cats and multi-eyeballed ancient demons to prove it: check it out, and be charmed. 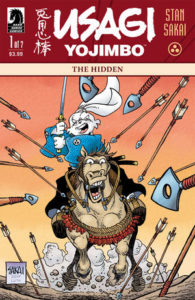 Usagi Yojimbo, instead of a regular issue, offers the first of a seven-part mini-series teaming up Usagi and his friend, the Columbo-like Inspector Ishida, involving a murder mystery and the shogunate’s attempts to stamp out 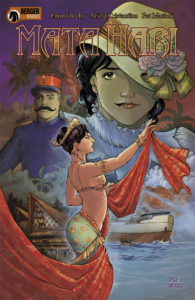 Christianity in the Japan of the late 1500s. Well-researched, action-packed, carefully constructed and extremely well drawn, as always; if numbering this as a first issue, and then collecting it as a graphic novel, will get more people to read Sakai’s always-excellent work, then more power to it.  Mata Hari is, as its name suggests, another historical comic, although its WWI-era setting is considerably closer to our own time; it’s also well-researched, and it characterizes its infamous German spy sympathetically, as a proto-feminist; its biggest attraction is Ariela Kristantina’s detailed, attractive art.  Dept.H reaches its conclusion

after 24 issues, with its heroine, long trapped in a research station six miles undersea while trying to solve her father’s murder, striving to reach the surface before her air runs out. Will she make it? Will she save the world, assuming that (a) it really needs saved, and (b) that she wants to? This probably isn’t the issue to pick up as your first (unless you’re one of those people who likes to read the last chapter of a mystery novel at the beginning), but it’s a satisfying conclusion; Kindt’s a very individual, quirky creator, but his elaborate, careful characterization and plotting always makes him worth reading, and this series has been no exception. 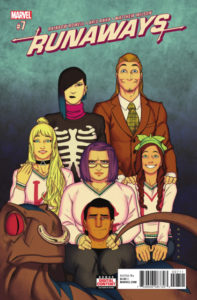 The Mighty Thor’s current arc is titled “The Death of the Mighty Thor,” and that’s exactly what it delivers; having followed Jane Foster’s saga for three years, Jason Aaron and Russell Dauterman bring it to rest. As with Dept.H, this isn’t the issue to start with, but it’s an appropriately-epic, and tender, ending, hitting all the right emotional beats, and if you haven’t checked in for a while, or lapsed as a reader because you didn’t want to read about a “lady Thor…,” well, you missed a lot of good storytelling. Thanos nears the end 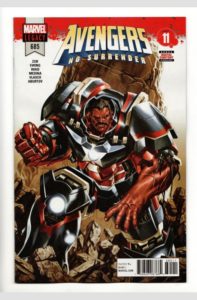 of Donny Cates’s first arc — a success, at least measured by the run’s first issue, #13, going for $50 on eBay (for the regular cover, although the “special” lenticular version is only around $8, which teaches us… something?) — with the Titan-bred bad guy in the far future, teaming with his older self to crush the last resistance of a dying universe. New voices and perspectives are always good, and Cates has a way of tweaking characters and swerving in unexpected directions that’s deservedly appealing. Runaways, having used its own initial arc to get the group back together and continuity- 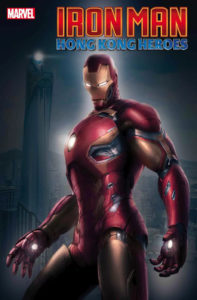 stable, spends this issue on relationships and characterization, leaving a mystery involving one of Molly’s schools friends to kick off the new plot; both art and story offer an affectionate look at its title kids, the kind of by-fans/for-fans comic that’s often fun for readers. Avengers continues its weekly-epic tale, with the Bruce Banner Hulk back and more monstrous (and unstoppable) than ever; its action- and character-packed plot, and every-seven-days schedule, has been successful enough that we’ll probably be seeing more similar stunts in the future. Iron Man: Hong Kong Heroes is a one-shot that exists because the actual Hong Kong in our world has a Disneyland, and that Disneyland has an Iron Man ride (the first Marvel-

character ride at any Disney park), and this comic, “inspired” by that ride, is by two of that city’s comics creators. Given that pedigree, it’s surprisingly readable, with a number of guest stars (Black Panther and the Hulk most prominent) and a painted style that manages a 50/50 blend of American and more manga influences. Weapon H is the first of an ongoing series featuring a “new” character (he’s a lab-bred cross between Wolverine and the Hulk, and first appeared in a crossover between the Hulk and Weapon X titles, so “new” might be stretching it), and, like Iron Man: Hong Kong Heroes, is better than it deserves to be, thanks to old Hulk hand Greg Pak’s entertaining script (which involves a Wendigo, a callback to the first meeting between Weapon H’s two “parents,” and a good example of why Pak’s good at this kind of thing).

Will it catch on? Hey, it’s the first issue — take a shot, jump on, and we’ll find out in a couple of months. That leaves Doctor Strange: Damnation, halfway through its mini-series about Mephisto taking over a resurrected Las Vegas, and turning most of the heroes, including Strange, into Ghost Riders beholden to him; that leaves Wong to assemble a strike team including the Johnny Blaze Ghost Rider, Blade, Moon Knight and a couple of others to try and save the day. If you were a fan of ’90s supernatural series like Midnight Sons or Spirits of Vengeance, you’ll probably like this too — and with the already-mentioned Donny Cates co-scripting (he’s also handling the chapters of the story that cross into Strange’s regular title, which he’s writing right now), it’s a decent-enough ride. 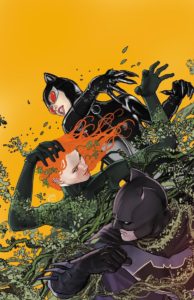 Batman concludes a story involving Poison Ivy brainwashing the entire world (including the Justice League) with her plant pheremones, leaving only Bruce and Selina to fight her; last issue, Bruce got punched in the head by a possessed Superman — but it turns out that was a bloody, and painful, part of a plan, and watching it unfold here — and watching King work out the conversations and relationships between Ivy, Catwoman, Batman and Harley Quinn — is most of the fun. If you aren’t reading this comic, 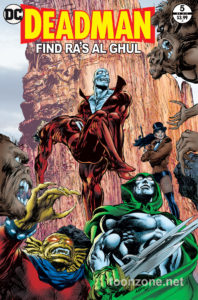 you ought to be — especially with a wedding looming.  Justice League itself is worth noting because it’s currently being written by Christopher Priest, and he’s got the League — whose watchtower has crashed in an African country — fighting an local leader/mercenary called the Red Lion, whose costume (and color/animal combo name) happen to resemble the Black Panther quite a bit. For some other writers, that would be a ripoff, but since Priest had a long, critically-acclaimed run on the Panther comic that started twenty years ago, and since Black Panther movie director Ryan Coogler has cited Priest’s tenure on that book as part of his inspiration for the movie, it’s more of a fun semi-crossover.

Deadman has Neal Adams writing and drawing the title ghost — plus the Demon, the Spectre, Zatanna and Doctor Fate — defending the mystical city of Nanda Parbat against a demonic invasion; it’s a story with Adams’s typically-“off” dialogue (Deadman to a friend: “Taj Ze… how the billy hill did I get here, you brobdingnagian samurai?”), sprawling plot, and very pretty pictures  that make it all worthwhile. Death Bed is a Vertigo series about an aging adventurer who’s hired a woman to ghost-write his life story; he’s very good at dealing with demonic cults and assassins and other forces, both natural and supernatural, but his egotism and cluelessness around regular people make him a miserable human being, and the ghost writer isn’t

afraid to call him on that. They make an intriguing pair, and Riley Rossmo’s art handles the regular people, the cults, the demons and the two leads with equal elan. Cave Carson Has an Interstellar Eye is, of course, the second season of Cave Carson Has a Cybernetic Eye (who knows what kind of eye it’ll be if there’s a third…), with Cave and the gang abandoning the underworld for the vastness of space. Rivera and Oeming made the first year of this title a kinetic action thriller with deep dives into DC continuity (Mad Dog?) and the weirdness dialed up to 11, and it looks like this year’s will be no different; the good news is, you don’t need to have read that one to like this one, and since it’s the first issue you can be there from the launch.

With 40 years of experience in comic reading, collecting and reviewing, English Professor Phil Mateer has an encyclopedic mind for comics. Feel free to ask Phil about storylines, characters, artists or for that matter, any comic book trivia. He will post your questions and answers on the AABC blog. His knowledge is unparalleled! He is also our warehouse manager, so if you are looking for that hard to find comic book, ask Phil!
View all posts by Phil →
This entry was posted in New Comics, Reviews and tagged Archie, Avengers, Batman, Cave Carson, Deadman, Death Bed, Dept.H., Doctor Strange, Ice Cream Man, Iron Man, Justice League, Kick Ass, Kill or be Killed, Mata Hari, Monstress, Moonshine, Runaways, Stray Bullets, Thanos, Thor, Usagi Yojimbo, Weapon H. Bookmark the permalink.