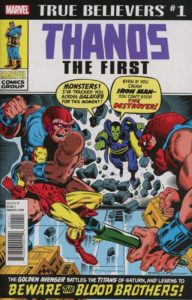 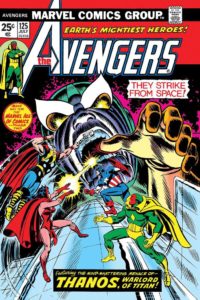 Marvel’s two new only-a-dollar reprints involve Thanos, and are both worth the buck: Thanos the First offers the Titan’s first appearance, from Invincible Iron Man #55, a seldom-reprinted, very early Jim Starlin fill-in for that title 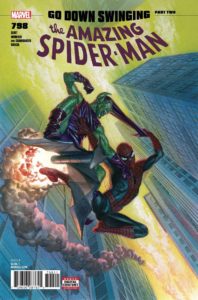 that not only introduces the purple-chinned tyrant but his nemesis the Destroyer, his father Mentor and his brother Eros too; Starlin created a Marvel cosmology, with its eternally-struggling personification deities and vast cosmic forces and insanely-powerful gems, that they still use today — the Avengers movie is going to be steeped in it — and you can see him starting to work it out right here.  But wait… there’s more! — Thanos’s first solo story, an obscure five-page back-up feature in the sixth issue of Marvel’s adaptation of the Logan’s Run movie, not by Starlin, but featuring early Mike Zeck art. All that history

for a buck makes this the best buy of the week. The other reprint, of Avengers #125, isn’t too bad itself: it’s from just a year and a half later, after Starlin had been given Captain Marvel to renovate and had poured all those growing cosmic concepts into it and created a fan hit, and sees Steve Englehart and John Buscema (and Dave Cockrum) tapping into that storyline. Englehart was one of the early-’70s versions of Tom King or Donny Cates, a new writer just starting to come into his own and attract attention, and this is a good sample of his superhero style — especially for that single dollar.  Of Marvel’s regular new 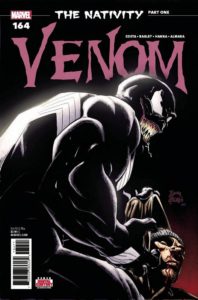 titles, Amazing Spider-Man is at the top; it’s barreling towards its 800th-anniversary issue with Spidey battling a Norman Osborn/Carnage symbiote mash-up, and is at that #798-of-800 point in the story where things aren’t going well, because there are still two issues left: it’s probably Marvel’s best superhero title right now, and for at least the next month.  The Spider-Man spinoff Venom gets two titles this week — Venomized is a mini-series continuing the earlier Venomverse and Venom Inc. stories, about a race of Poisons who are extra-dimensional Venom symbiote predators and yadda yadda; it’s an excuse to turn a bunch of Marvel 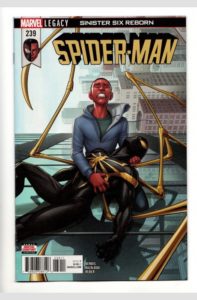 heroes into Venom versions, and have a big dumb widescreen fight, and on that level it works surprisingly well. The regular Venom offers the start of a new arc as a jump-on issue, and it’s deliberately-classic Eddie Brock Venom, both menacing and sort-of heroic, from the cool-looking cover to the Mark Bagley interior: worth a try, just to see if you like it.  Spider-Man is from another corner of the Spider-verse, with Brian Michael Bendis wrapping up his decades-long Ultimate Spider-Man run, now involving the teenage Miles Morales living on the regular Marvel earth; if Miles gets anywhere near the note-perfect sendoff that Bendis gave Jessica Jones  last week, it’ll be worth sticking around for. 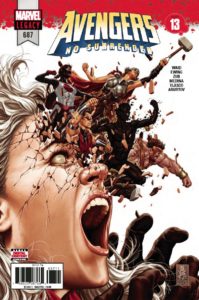 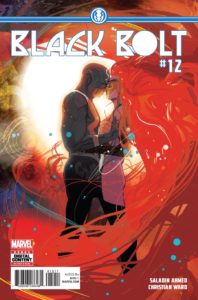 Avengers, in the home stretch of its four-month weekly story, continues to make its case for that format, with its 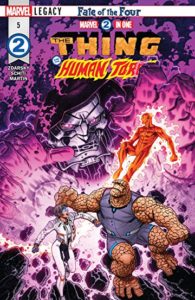 brisk pacing enabling its high-stakes action and interlocking multi-character plots. Black Bolt ends what turned out to be a 12-issue mini-series, but a very good one, comparable to last year’s Vision with its dreamy, brightly-colored art and dense interior monologues; in some ways, I like it better, because it resolves its existential dread with a more crowd-pleasing last act. Rise of the Black Panther chronicles the first faceoff between T’Challa and classic evil 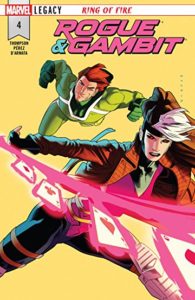 third-person-referencing Doctor Doom, and doesn’t screw up that fan-friendly premise; it continues to craft decent, accessible stories for what could have just been a movie cash-grab. With the announcement of a new ongoing Fantastic Four series this August, Marvel Two In One is revealed for sure as a prequel to that return, so F.F. fans need to be getting that comic. Rogue and Gambit makes the list because Kelly Thompson’s delight in getting

to write about that star-crossed pair is so infectious, and because she’s creating such a sly superhero romance comic out of it. New Mutants: Dead Souls is a mini-series about that crew as challengers of the unknown, in this issue investigating mysterious doings at a Russian Arctic installation and finding… well, the cover’s just over to the right there; it continues to be a callback to the ’80s/’90s versions of the characters (like so many Marvel books now), with a team of Magik, Wolfsbane, Rictor, Strong Guy and Boom-Boom, and a last page that will make old-time fans very happy. 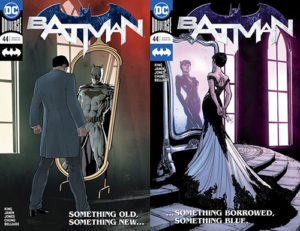 The Curse of Brimstone #1 — Writer: Justin

Batman offers, not a wedding, as its cover seems to hint, but some preparations for it: Catwoman shopping for a wedding dress (well, stealing one…), intercut with scenes from Selina and Bruce’s many meetings over the years. That’s catnip for continuity buffs, and the silent-movie dress shopping, plus the Joelle Jones art on the those

sequences (given the precise, beautiful fashion sense she showed on Lady Killer, she’s the perfect choice for them), plus the small coda at the end (and the expression on Alfred’s face) make it another great, if understated, comic.  Batman: White Knight offers its penultimate issue, with a reformed-through-medication Jack Napier teaming up with the Dark Knight to save Gotham from a PO’d Harley Quinn (one of them), and struggling with his inner demon; this has been an unexpected hit, largely on the strength of Sean Murphy’s whiplash storytelling (two Harleys?) and good-looking art. The Curse of Brimstone is DC’s newest “New Age of Heroes” launch; it’s about a kid trying to save his dying small coal-mining town who makes, yes, a deal with the devil that, yes, goes badly and, yes, turns him into

the flaming title character. Philip Tan’s shadowy art style is perfect for the sinister occult goings-on, and the coloring really makes the “hero” pop; this is an attractive package, and should get some initial sales, although it’s not yet clear if the ongoing story will live up to them.  Astro City has always been about the story; it’s moving to a new-graphic-novel format instead of a floppy version after the current arc, and its final plot, about a support group for people who’ve lost loved ones as collateral damage from various super-powered confrontations, spotlights exactly the small human emotions and struggles that have made the series a fan favorite for many decades now.

Of the new indy debuts, Xerxes comes with the strongest pedigree: it’s a prequel to Frank Miller’s 300, beginning with an Athenian/Persian skirmish ten years before that earlier series’s transforming Battle of Thermopylae, and 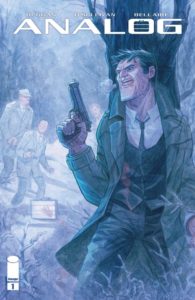 eventually, as its subtitle proclaims, chronicling the rise of Alexander the Great. Miller’s always worth a look, especially since he seldom does comics any more, and this kind of bloody, heroic historical clash of philosophies and warriors is exactly in his creative sweet spot. Analog is a near-future crime/suspense book, about a courier/killer for hire with a secret: he’s responsible for “the Great Doxxing,” a 2020 exposure of everyone’s online data, simultaneously; now, in 2024, anything you do on the Internet is transparent to everyone else. That’s the hook, although the action so far is standard noirish thriller stuff, with gunplay and snappy 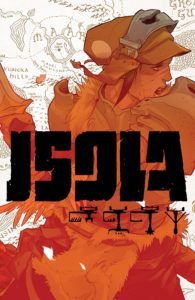 patter: as such stories go, it’s a better-than-average, entertaining example. Isola is an sf/fantasy book that plops us down in the middle of the story, without explanation: a woman soldier with a bow and arrows is protecting a florescent-blue striped tiger from hunters in a forest, referring to her as “your majesty” (although the tiger doesn’t talk back, it clearly understands, and commands, her). What’s going on? A couple of clues are dropped in this first issue, but otherwise it’s one of those comics that will tell us as it goes; Karl Kershl, fortunately, draws really good-looking tigers, so it looks like it’ll be fun to stick around for at least a couple of issues and see what’s up. 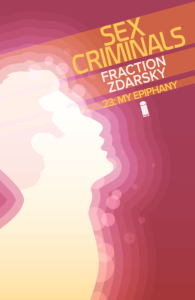 Incognegro continues its 1920s Harlem-Renaissance murder mystery, with its hero an African-American 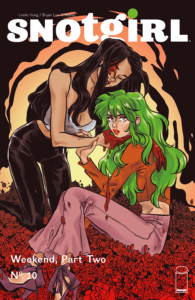 reporter who’s light-skinned enough to pass for white (hence the title); it’s well-researched and well worked out, with appealing characters and a suitably-twisty plot. Sex Criminals‘s current arc has Jon and Suzy, the title characters, separated and on the outs, so while it’s been a necessary stage it’s also been frustrating; that starts to turn around this issue, and I’m trusting Fraction and Zdarsky to make the reunion/resolution worth the wait, because this series has established itself as a smart, funny and very 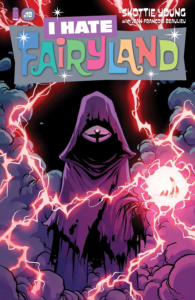 human comic so far. Snotgirl is about a fashion-blogging girl dealing with a number of issues, both internal and external, including allergies, low self-esteem and a ghost; it’s worth reading because it’s written by Bryan Lee (Scott Pilgrim) O’Malley, and has colorful, precise and fashion-conscious manga-y art by Leslie Hung. I Hate Fairyland is ramping up an actual continued story (instead of the usual  shorter, more-slapstick bits), involving Gert in hell, and the now-deceased Queen Cloudia being resurrected, turned into an energy vampire, and beginning to destroy 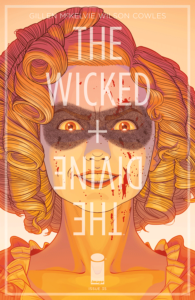 Fairyland… with, of course, only one person with a chance to stop her; Skottie Young makes it all cynical, brightly-colored, cartoon-violent fun. The Wicked and the Divine is early into its final arc, with maybe ten or eleven issues to go — and when the book’s whole hook is that, every ninety years, twelve gods get reincarnated, charge up their avatars with powers for two years and then die again, you know that the body count’s going to be (and has already been) high; we’ve been getting some answers and revelations (leading mostly to more questions) in the last few issues, and there’s a major reveal in this one — but,

as always, the attraction is the Gillen/McKelvie team’s snappy visual style and knowing, realistic-despite-the-magic grasp of its characters and their many relationships and flaws.  Koshchei the Deathless, besides giving Spellcheck fits, is Mike Mignola writing about a Hellboy spinoff character (with a framing sequence featuring him giving his life (and death) story to Hellboy himself, in a tavern in Hell); it’s got plenty of that dark-forest, Grimms’-fairy-tale atmosphere and dreamlike supernatural dread that Mignola does so well, and Ben Stenbeck offers a more-than-passable imitation of it in the art, too, so Mignolaverse fans shouldn’t miss it; the Mignola cover is just added incentive.

With 40 years of experience in comic reading, collecting and reviewing, English Professor Phil Mateer has an encyclopedic mind for comics. Feel free to ask Phil about storylines, characters, artists or for that matter, any comic book trivia. He will post your questions and answers on the AABC blog. His knowledge is unparalleled! He is also our warehouse manager, so if you are looking for that hard to find comic book, ask Phil!
View all posts by Phil →
This entry was posted in New Comics, Reviews and tagged Analog, Astro City, Avengers, Batman, Black Bolt, Black Panther, Brimstone, I Hate Fairyland, Incognegro, Isola, Koshchei the Deathless, Marvel Two-In-One, New Mutants, Rogue and Gambit, Sex Criminals, Snotgirl, Spider-man, Thanos, Venom, Wicked and the Dead, Xerxes. Bookmark the permalink.