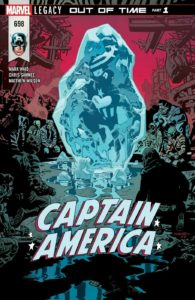 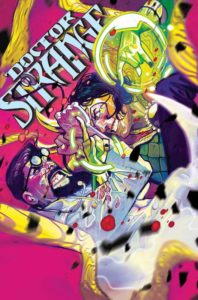 The newest volume of Captain America has been kind of under the radar, but the Mark Waid/Chris Samnee team is one of the best in comics, with solid structure and a sleek, 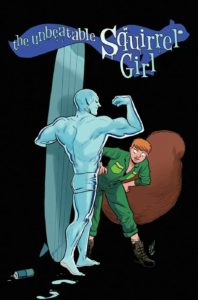 modern style.  In the run-up to issue #700, Cap’s been frozen in ice again, to revive in a future America that’s been taken over by one-percenters and led by a king; that leads to some pointed political commentary, always part of this book’s DNA (Jack Kirby’s bicentennial run-up to issue #200 featured a similar takeover plot, and Steve Englehart had Richard Nixon the leader of a vast fascist conspiracy in the ’70s, and killing himself when confronted by our hero), but 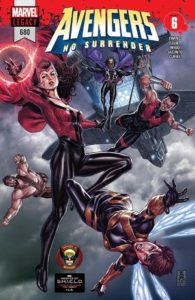 Waid has Steve Rogers’s personality and values down cold, and knows just how to mix the action and the speechifying to maximum effect. Doctor Strange ends its first arc under new writer Donny Cates, involving Loki having taken over Stephen’s job as Sorceror Supreme, and it sticks the landing: the plot resolution works well enough, but it’s the little character bits and revelations after it that stick in the memory — it’s hard to write the Asgardian mischief-maker right, especially in his current conflicted state, but Cates does just fine. Loki’s in the latest 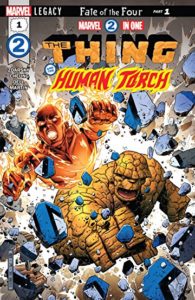 Squirrel Girl, too, along with Drax the Destroyer and the Silver Surfer, and his personality shines through there as well.  As always, the combination of Ryan North’s humor (here, the two Surfer impersonators who have been conning planets out of protection money, and talk like California beach bums) and Erica Henderson’s confident, unique art (she does aliens better than anyone this side of Fiona Staples, including an alien fleet commander who looks like a Sphynx cat) always make me smile.  Avengers continues its weekly-epic extravaganza, with a purloined Earth, dozens of good and bad guys, and lots of action, 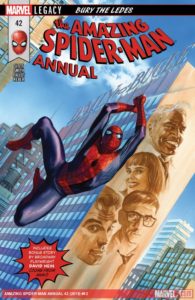 while developments with the Thing and the Human Torch in Marvel 2-In-One make its real purpose — to serve as a run-up to the relaunch of the Fantastic Four — ever more clear; if you’re a fan of Marvel’s first Silver Age comic, and premiere superteam, you want to be reading this book. That leaves Amazing Spider-Man Annual #42; it’s a Betty Brant/Daily Bugle/Spidey tale with callbacks to Ned Leeds, featuring old Spider-villains the Enforcers, and a suitably-fun, mostly-light-hearted reminder from writer Dan Slott, whose tenure on the regular title is up in just a few months, of just how much the spider-verse is going to miss his steady hand. 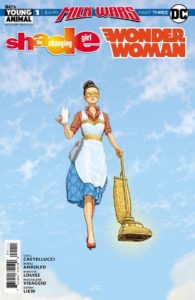 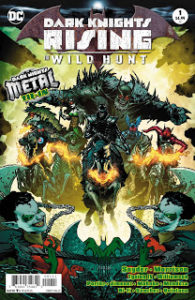 Shade the Changing Girl/Wonder Woman continues the “Milk Wars” theme — a cosmic conformity conspiracy has brainwashed the Justice League members (Wonder Woman is a housewife, a domestic goddess instead of a real one), and the weirdos of the Young Animal imprint have to kick them out of it; Cecil Castallucci made Shade’s first volume quirky and oddly appealing, with a plot that kept 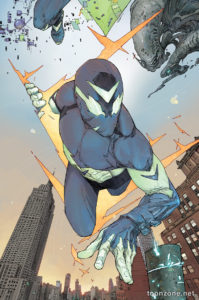 taking nonlinear twists while connecting with everyone’s feelings about being an alien, and that carries over to this one-shot, too: it’s a good example of her appeal as a writer, and with a new Shade the Changing Woman due soon, a good opportunity to sample her storytelling. Dark Knights Rising: The Wild Hunt is really just episode 5.5 of Dark Knights: Metal; it continues that mini-series’ universes-spanning story, as all the bad-guy Batman avatars gather and prepare to doom the DC universe, and sets up its conclusion (which now isn’t due until the end of March). With four writers and three and a half artists, there’s a lot of cooks, 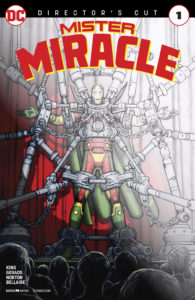 but it hangs together well enough, and while there’s plenty of action and adventure, I had the most fun trying to spot the parts contributed by Grant Morrison (only he could come up with the chimp ex machina, 53rd-universe rescue and cliffhanger at the end). Sideways is another of DC’s “New Age of Heroes” debuts, about a high-school kid who developed the ability to open dimensional rifts and teleport through them after he got caught in the Gotham City Dark Nights: Metal events; writer and DC head honcho Dan Didio would have trouble writing his way out of a paper bag, but artist Kenneth Roquefort has some good-looking figure work and splashes, and the teen hero manages a little bit of an early-Spider-Man vibe that works well. The Mister Miracle 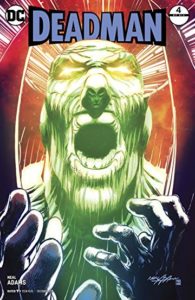 #1 Director’s Cut reprints, of course, Tom King and Mitch Gerads’ first issue of that current mini-series; first prints of that book are going for $35 on eBay right now, so it’s a cheap way to see what the (well-deserved) fuss is about. Extras include a new five-page origin, and King’s entire script for the issue — if you’re an aspiring comics writer, or just curious about how such things are produced, it’s worth the $5.99 by itself. Deadman #4 continues Neal Adams’s return to that character; it’s got both the great art and the cockeyed dialogue and storytelling that come when Adams generates complete comics on his own, and it, too, is worth every penny: even Adams’s flaws are interesting, and uniquely his own. 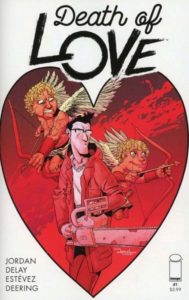 A debut, a relaunch and a conclusion, all from Image: Death of Love’s angular art and anything-goes plotting somehow 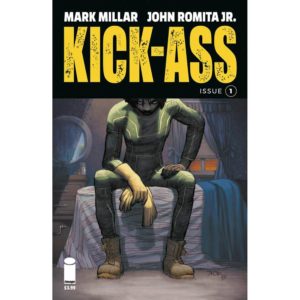 remind me of Chew, although instead of foodie super-powers its protagonist, after taking a pill supplied by a mysterious stranger,  gets caught up in some kind of Cupid-based conspiracy; he’s suddenly able to see winged cherubs with bows and arrows hovering around places like singles bars. That’s about as far as the first issue gets, but there’s a flash-forward involving him chainsawing the Cupids, so count me onboard to see how that plays out. Kick-Ass relaunches with a new person in the costume — an Army vet who comes home to find her 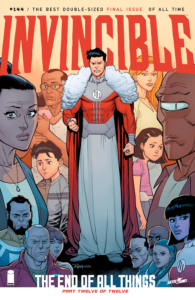 irresponsible husband has run up debt and left her and her two young kids penniless; putting on the Kick-Ass costume and robbing bad guys seems like a rational plan, and as long as John Romita Jr.’s drawing it, it’s fine by me. Invincible ends its 12-year run in high style, with the end of a 12-part epic that’s tied up loose ends and taken its cast into the far future; for a book that originally got attention because of its masterful, head-spinning twist at the end of its first arc, six issues in, it’s had a long life, with creator Robert Kirkman’s signature combination of adventure, soap-opera relationships and canny twists on the superhero genre; it’s definitely an advantage when you own your comic and characters, and can go out on your own terms. 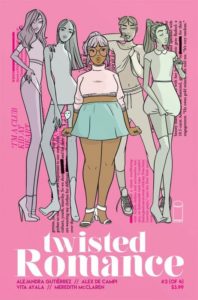 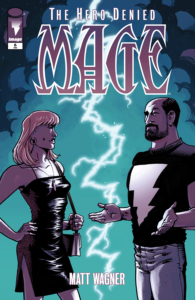 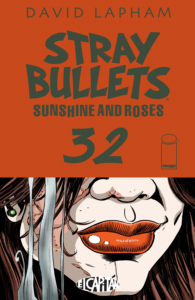 I didn’t think Twisted Romance could improve on its Katie Skelly-drawn first issue, but I should have trusted series writer Alex de Campi: while she gave Skelly a horror story/romance, playing to her strengths, this issue’s Alejandra Guttierrez gets a tale about a fashion-photographer’s assistant, normal-sized among all the twiggy models, who falls for a handsome actor who arrives for a magazine cover shoot. That plot wouldn’t be out of 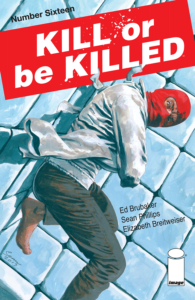 place in an old DC romance comic like Girls’ Love, but Campi adds some expert modern twists and themes to it, and Gutierrez delivers a story that’s very different, but just as good, as Skelly’s in the previous issue. Mage, having spent the first third of its new volume establishing Kevin’s current situation, kicks the plot into higher gear this issue, with family conflicts, a chilling scene with the bad guys, and a new complication for wife Magda; it’s not a bad check-it-out issue, and, considering that Matt Wagner’s 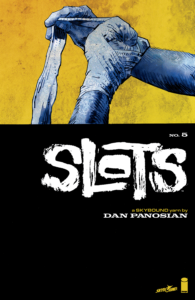 been making this title his central story for decades, you really should. Stray Bullets, Kill or Be Killed, and Slots are all crime/noir books; Stray Bullets sees our trio of mobster-robbing thieves split up, and follows Derek, who goes back home with his share of the loot but no prospects… and then finds some; it could be the story’s end, but David Lapham isn’t one for pat happy endings (noir, remember?), so it’s not over, and will presumably go bad from here. Kill or Be Killed has its maybe-demon-hounded vigilante hero in a mental hospital, as events 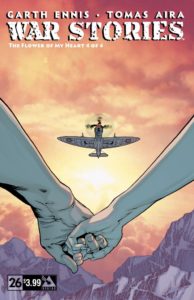 occur in the outside world that will mess him up considerably, but that he’s helpless to control, while the aging-pugilist grifter protagonist of Slots sets up a con and gets beat up; all three titles have hard-nosed stories and good-looking, expert art — Slots, especially, is like reading some lost EC issue of Two-Fisted Tales drawn by Jack Davis. War Stories comes to its conclusion, at least until Garth Ennis can come up with some more of the battle tales (mostly about Brits in WW II, although they’ve ranged far beyond that) that he does so well; it gets a happy ending too (or at least as happy as anything gets in the uncertainty of wartime), making it a perfect book to finish the week.

With 40 years of experience in comic reading, collecting and reviewing, English Professor Phil Mateer has an encyclopedic mind for comics. Feel free to ask Phil about storylines, characters, artists or for that matter, any comic book trivia. He will post your questions and answers on the AABC blog. His knowledge is unparalleled! He is also our warehouse manager, so if you are looking for that hard to find comic book, ask Phil!
View all posts by Phil →
This entry was posted in New Comics, Reviews and tagged Avengers, Captain America, Dark Nights Metal, Deadman, Death of Love, Doctor Strange, Fantastic Four, Invincible, Kick Ass, Kill or be Killed, Mage, Mister Miracle, Shade the Changing Girl, Sideways, Slots, Spider-man, Squirrel Girl, Stray Bullets, Twisted Romance, War Stories, Wonder Woman. Bookmark the permalink.