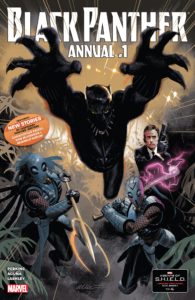 Marvel manages to capitalize on a mega-hit movie successfully, with the Black Panther Annual featuring new stories from the three writers most associated with him: Don McGregor, whose ’70s run produced Erik Killmonger and one of the movie’s climactic waterfall scenes, and is on the short list of First True Graphic Novels; Christopher Priest, whose wonderful ’90s tenure was the basis for a lot of the movie characters, including the Dora Milaje and Everett K. Ross (whom he resurrects for a 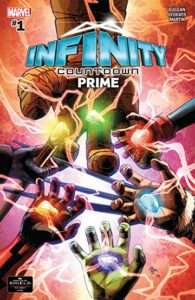 present-day encounter with the Panther here); and Reginald Hudlin, who’s serializing an alternate-future-set story (“Black to the Future”) where a still-married Panther and Storm have gone to war with the United States, and find themselves ruling the world.  Great introduction to the Panther’s long history of good storytelling, and more than worth its $4.99.  Infinity Countdown: Prime is the prelude to this summer’s Avengers-movie-friendly event, and it’s a tutorial on the Infinity Stones (with a clever chart on their interrelationship) and a look at who’s got which stones where.  This means we get Mike Deodato art with the original, now-returned Wolverine (who’s got one of the Stones) fighting a bunch of Ultron lackeys for it and then having Loki show up and try to talk him out of it; there are similar scenes with the other wielders, some good guys and some not. Worth it for the primer on the Stones, and for Deodata, who does a better Logan than anyone this side of John Buscema, and gets a number of cool splashes with other characters, too.  Doctor 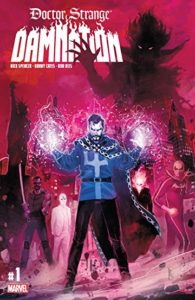 Strange: Damnation is a five-part mini-series with that character that also crosses over into his own title and into Scarlet Spider. Why Scarlet Spider? Because it’s set in Las Vegas, and this is all about Doc trying to clean up one of the Marvel Earth after-effects from Secret Empire: Las Vegas got destroyed. Powered up, he manages to resurrect it — except that the whole town’s been in hell (“Sin City, literally…), and so now it’s owned by Mephisto, who tempts Strange into a Contest of Champions-like game wagering his soul against those of everyone in the city. Fair enough premise, with Nick Spencer and regular Doc writer Donny Cates an encouraging writing team, and some appropriately-demonic painted art from Rod Reis 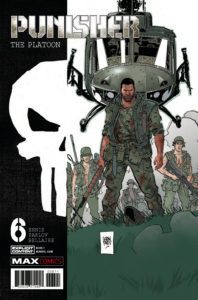 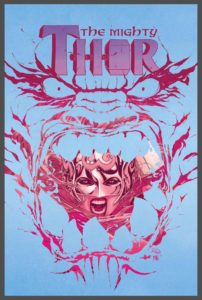 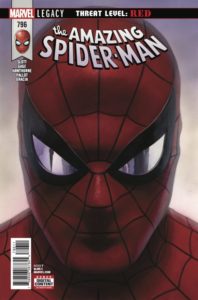 Punisher: The Platoon concludes; any Garth Ennis/Goran Parlov Punisher story is worth reading, and, while it isn’t their best ever (it has too much competition, spread out over a thousand pages), it’s a worthy edition to the canon, and a go0d sample of their collaborative strengths. Thor is rushing toward the conclusion of its Jane-Foster-as-Thor era, and, presumably, fulfilling the adage that all stories end in 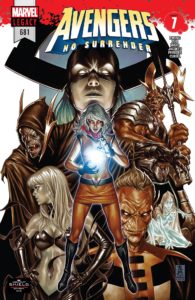 death; it hits some well-earned emotional beats, and Russell Dauterman, who’s spent three years telling this story, draws with the passion of someone who wants nothing more than to stick the landing. Amazing Spider-Man sees the aftermath of Norman Osborn merging with the Carnage symbiote, and sets up Dan Slott’s blow-out swan-song rush to #800 that begins next issue — although it’s a quieter scene with Mary Jane Watson, with its callbacks to a couple of much earlier moments in Spider-history, that sticks in the memory. 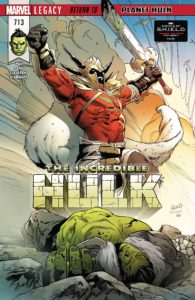 .Avengers sees a bunch of fighting and maneuvering, with the Earth the battleground for rivals in a deadly cosmic gamer between the Grandmaster and… another Grandmaster, sort of, and the last-page return of a not-quite-founding member (his sixth, I think…).  It’s well-told, but chapter seven of a ten-part story probably isn’t the best place to jump on; grab up the earlier issues instead — which, since it’s a weekly, should all still be available. Incredible Hulk sees the end of the Planet Hulk II arc, but with developments that will lead directly into, 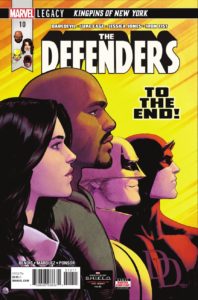 naturally, World War Hulk II; this would be dumb in most creators’ hands, but since writer Greg Pak penned both of those earlier stories, he’s earned the right (as with the Jane Foster Thor, this all looks to be heading to a return to its Banneresque status quo soon, so it’s a good time for lapsed readers to check in). Defenders concludes this volume of the title, as Brian Michael Bendis packs his bags to leave for DC (the company, not the city); this was probably supposed to be twelve issues instead of ten, but given his decompressed style it works just as well with the last three issues squeezed down to one, and maybe better — it’s an abrupt ending, but a satisfying, amusing and appropriately widescreen one. 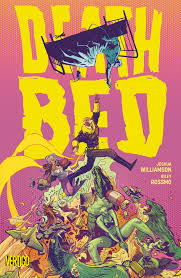 The Brave and the Bold #1 (of 6) — Writer/Artist: Liam Sharp;  Colors: Romulo Fajardo Jr 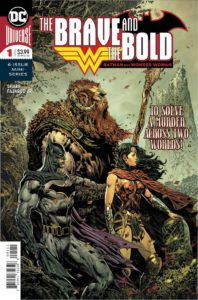 Death Bed is about an aging adventurer who commissions a woman ghostwriter to tell the story of his Baron Munchausen-like life (involving demons and other enemies, who are now circling as he gets closer to death).  It’s notable because of the beautiful Riley Rossmo art — even in this first issue, with a lot of set-up, Joshua Williamson gives him lots of opportunity to impress with splashes of the main characters, sometimes just to show 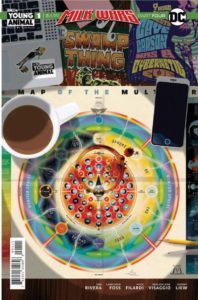 their lives and sometimes in all-out action, and he nails every single one.  Brave and the Bold is a mini-series starring a Batman/Wonder Woman teamup (of course…) involving Gaelic mythology and the fairie realms; it’s another book notable for the visuals, as writer/artist Liam Sharp’s style involves some striking page designs and intricate character and scenery work, all looking more than good enough to get the reader to come back for another issue.  Milk Wars, the Young Animal/JLA crossover, has its penultimate installment with a story that sees Cave Carson and his team trapped as brainwashed office drones, and then teaming up with Swamp Thing to kick butt, establish backstory and set everything up for 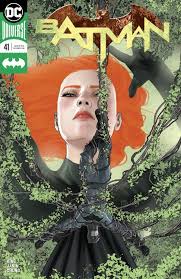 the Doom Patrol/JLA conclusion next week. I miss regular Cave Carson artist Michael Avon Oeming, but Langdon Foss has a similar part-cartoony style, and does a decent job handling the surreal, often-meta plot — and, as with the other DC writers this week, Jon Rivera gives him plenty of action to draw, too.  That leaves Batman, starting a new arc involving Poison Ivy pretty much taking over the planet — except for Bruce and Selina. This one’s almost all setup, but at this point I’ll take any Tom King Batman story, sight unseen — and, since Mikel Janin draws a great-looking Ivy, and King gives him two full-page splashes of her, plus a double-page one, it’s an automatic buy. 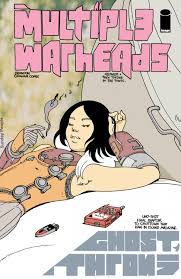 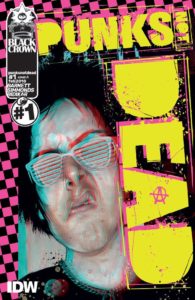 Of the indy first issues, Multiple Warheads is actually the conclusion to a serial begun in Brandon Graham and Emma Rios’s late, lamented new-wave anthology, Island. No matter: new Graham is always a reason to celebrate, and this issue offers his usual extensive world-building, smart sf, and attractively-designed people (and aliens) doing sometimes-sneaky, sometimes terrible and sometimes noble things in attractively-designed places. Punks Not Dead (yes, without the apostrophe) is from former Vertigo editor Shelly Bond’s Black Crown imprint, and looks very much like a ’90s Vertigo comic: a modern-day, alienated and put-upon British school kid encounters what looks like the ghost of 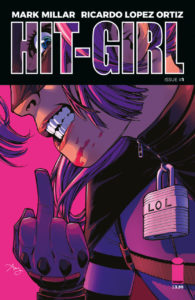 Sid Vicious, whom he can see even though no one else can, who then coaches him about things like not getting beat up by the school bully. Smarter than it sounds, and promising to go off in unexpected directions, although anyone who was, say, 20 in 1977 is now 60 freaking years old; does that mean this will struggle to find an audience, or is it true that, in fact, the spirit of punk will never die?  Hit-Girl is a much surer thing, since Mark Millar’s Kick-Ass universe has been making money for a decade now. Instead of John Romita Jr. we get Ricardo Lopez Ortiz (Wolf; the Civil War II Kingpin spin-off), who brings a cartoonier, slightly-manga style that also, somehow, reminded me of 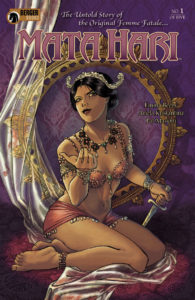 Jim Mahfood; the plot involves Mindy, with the original Kick-Ass retired, going to Columbia to recruit a drug cartel hitman to help her take out a bunch of South American bad guys. Mata Hari is a five-issue mini-series about that femme fatale and spy, executed for treason — but, with an all-woman creative team, it becomes a story about how, in a time where women had no access to power, she was able to get some anyway. Its biggest draw is, once again, the art: Ariela Kristantina brings much the same heady combination of sex, horror and empowerment that she did to her last book, Insexts; look at the book’s cover, and how it combines beauty, menace and seductive strength, and you’ll  see the attraction. 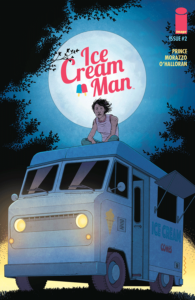 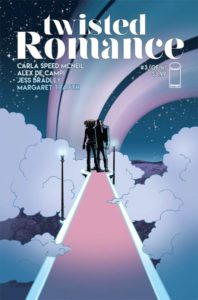 Ice Cream Man could be subtitled Touched By a Devil; its title character is a supernatural entity driving an ice-cream truck who shows up in people’s lives at their worst moments, and tempts them, after which things (at least 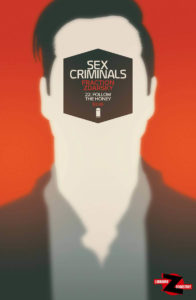 based on the first two issues) go badly. The done-in-one horror-anthology structure is effective, and writer Smith has a good eye for both character flaws and strengths, and how they get exploited, and achieves a nice air of quiet menace with the ICM himself. Twisted Romance continues its roll call of Artists Who Want to Draw Alex de Campi scripts, with Carla Speed McNeil on an sf romance.  Three effective love stories in entirely 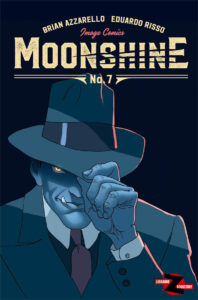 different genres in three issues, all tailored to their particular artists’ strengths: that’s how you get talented people to collaborate with you. Sex Criminals is in the middle of an on-the-outs arc, as the bad guys maneuver and the heroes wander around and, presumably, at some point will get back together and do something great and resolve the story… but not here. Points for Suzie at her parents’ house trying to

connect to the Internet with their ’90s-era computer…. Moonshine starts a second season, as Brian Azzarello continues to give Eduardo Risso early-20th-century mobsters, Appalachian distillers and werewolves to draw, and it doesn’t matter if the story’s kind of hard to follow because man, is it pretty. Dept.H hits its penultimate issue with its heroine, struggling to reach the surface after being six miles undersea, figuring everything out; if you read earlier issues and got sidetracked, this is a great place to come back, right in time to worry about the life-or-death conclusion next month.

With 40 years of experience in comic reading, collecting and reviewing, English Professor Phil Mateer has an encyclopedic mind for comics. Feel free to ask Phil about storylines, characters, artists or for that matter, any comic book trivia. He will post your questions and answers on the AABC blog. His knowledge is unparalleled! He is also our warehouse manager, so if you are looking for that hard to find comic book, ask Phil!
View all posts by Phil →
This entry was posted in New Comics, Reviews and tagged Avengers, Batman, Black Panther, Brave and the Bold, Death Bed, Defenders, Dept.H., Doctor Strange, HIt Girl, Hulk, Ice Cream Man, Infinity Countdown, Mata Hari, Milk Wars, Moonshine, Multiple Warheads, Punisher, Punks Not Dead, Sex Criminals, Spider-man, Thor, Twisted Romance. Bookmark the permalink.