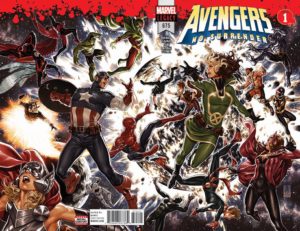 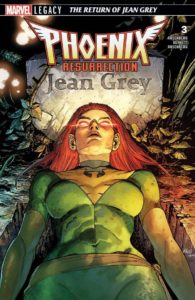 There’s quite a bit of action with Marvel’s Avengers and X-Men books right now. Avengers 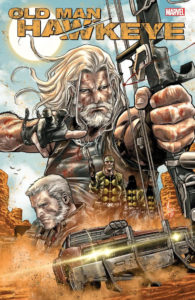 #675 is kicking off a four-part weekly Big Event, “No Surrender,” which starts with the Earth getting hijacked (with everybody still on it), and proceeds from there; all the various Avengers teams are involved, and presumably there will be cancellations, reshuffling and a return to basics. The writing team is a good mix — Waid’s got the encyclopedic knowledge of the team and the characterization; Ewing’s got the cosmic sweep, and Zub’s got the structural integrity. Larraz does a decent job with the huge amount of players and actions he has to cover (he does a particularly good Rogue), and the coloring and production values make it all pop; it’s also got the first Marvel lenticular cover that looks decent, using the process to create a 3-D effect instead of alternating pictures, and is wrap-around to boot. Phoenix: Resurrection shows how a weekly mini-series can take more time on its beginning and set-up when readers are getting the next installment in days instead of months;  getting from “no Jean” to “She’s alive!” in five 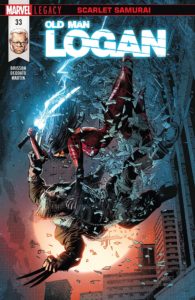 weeks, and 100 story pages, keeps us from being bored, if nothing else.   Old Man Hawkeye kind of straddles the “A” and “X” franchises, since he’s an Avenger, but in the “Old Man Logan” X-Men timeline where all the bad guys teamed up, brainwashed Wolverine into killing all of his friends, and then beat/killed almost all of the other heroes and conquered the country. This new 12-issue maxi-series is set 45 years after that,  but before the events in the original Old Man Logan story  (Clint, who’s blind in that,  can still see as this begins), and if you like post-apocalypic, “Twilight of the Gods” tales, it looks like it will be a decent, competently-told one. Old Man Logan itself, which sees that 50-years-older version of the Canadian mutant having time-traveled to the regular Marvel world, has Logan in Japan, encountering his ex- 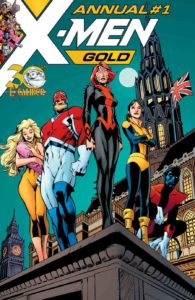 girlfriend Mariko and both Silver- and Scarlet-armored samurais, and is worth looking at because of Mike Deodato’s cinematic, movie-realistic action and character work. X-Men Gold Annual is a valentine to the Chris Claremont/Alan Davis Excalibur series, as Kitty, Nightcrawler and Rachel hear that their old friends and ex-teammates, Brian “Captain Britain” Braddock and his wife Meggan, have had a baby, and travel to England to congratulate them; naturally, and inevitably, complications (involving aliens wanting revenge on the Phoenix, or at least “a” Phoenix) ensue. A selling point is the way you can tell that everyone involved in this story has fond memories of that late ’80s/early ’90s original Excalibur run; it’s that affection that makes it all work. 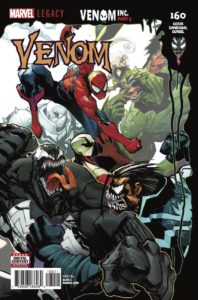 Marvel’s been returning a lot of its books to their default settings lately as part of its “Legacy” branding — not as a “Rebirth” big bang, but gradually, through their current storylines —  and Venom is no

exception; it’s got the penultimate chapter of the “Venom, Inc.” storyline this week, and it’s clear they’re moving to get Eddie Brock back with the symbiote, while also giving former partners like Flash Thompson something to do, and creating a new nemesis while they’re at it. It’s superhero comfort food, with lots of action, good-looking character splash pages, and Spidey/Eddie/Flash/Black Cat repartee;  if you’ve been a Spidey or Venom fan in the past, it’s worth checking out.  Runaways has been doing something similar, acknowledging its characters’ pasts while clearing out the random debris accumulated around them in past volumes; the result is an effective YA-oriented re-origin story that should be both familiar to fans of the TV series, and attractive to longtime readers. Like Venom, it’s the penultimate chapter of 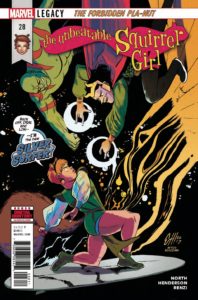 the book’s first arc, and ends with a twist, a menace, and the kids back together for what looks to be a big fight next issue; it’s well-designed and good-looking, and the humor and action combine well.  Squirrel Girl doesn’t have to do a “Legacy” revamp, because it’s been cutting-edge modern from its beginnings: Ryan North’s snarky-funny-but-compassionate writing and Erica Henderson’s deceptively-simple art mesh to make its title character just really likeable.  Pick up this issue and watch her easy friendship with Loki (who treats her as an equal) and the way she charms Drax the Destroyer; then, get caught up in the screwball-comedy plot, involving alien scam artists who dress up like the Silver Surfer to fool planets into giving them all their money to keep Galactus 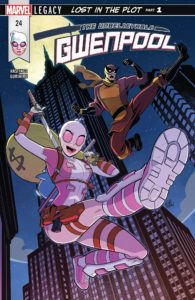 from showing up, and see if you aren’t charmed, too. Gwenpool isn’t worrying about legacy issues, because she’s been cancelled, with her final issue due in a month or two; however, since the character knows she’s in a comic book, she’s been trying to deal with it in various ways: here, she teams up with an old partner, Batroc the Leaper, to see if turning into a villain won’t goose sales and help her survive. It doesn’t work, but the meta stuff is entertaining and affecting — her speech to Batroc, about how he’s been a decent-enough rogue in her book, but will probably revert back to standard boring B-list bad guy when other writers use him, is a good example of the way this creative team has upended conventions, and attracted a passionate, if too small, fan base. 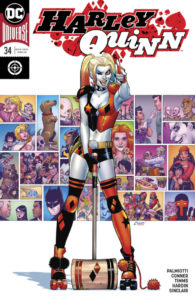 In Mister Miracle, Scott and Barda battle their way to the throne room of New Genesis, where his sort-of stepbrother Orion waits to kill him, and on the way discuss how they’re going to redecorate their condo.  As Jack Kirby himself said on the cover of his Jimmy Olson #141 (the issue with a big picture of Don 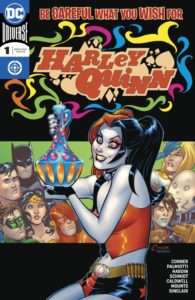 Rickles on it): “Don’t ask! Just buy it!”; the story reaches its halfway point with a (possible) death and a revelation that was easy to see coming, but which has impact anyway, as one of the best comics of last year shows that it’ll probably be one of the best one this year, too. Harley Quinn #34 is her last issue by longtime writers Jimmy Palmiotti and Amanda Conner, and there’s a road trip with Poison Ivy, a family reunion, a visit with a pair of old friends and a meet-the-creators moment: a fitting sendoff for a run with surprisingly-deep themes about female empowerment and the importance of strong relationships (along with, you know, all the hammer-bashing and murder…). As a special bonus, there’s also Harley Quinn: Be Careful What You Wish For, a one-shot written by the same team and also 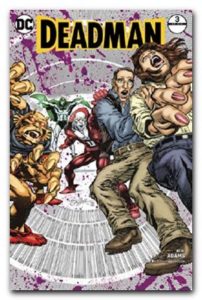 drawn by Conner (along with some others) about Harley finding a magic bottle with a genie who’ll grant anything she want.  It’s cleverly worked out and lovely to look at, and a reminder of just how much we, and Harley, will miss her wife-and-husband scribes. Deadman is a total Neal Adams production (he wrote, drew and colored it), so it’s lovely to look at, too. It’s also stuffed with ideas, some of which work better than others (including the way those radiating lines at the bottom of the cover actually spell out the same mysterious message the lead character gets at the end of the book), although just watching Adams tell a story about a character whose adventures he first drew fifty years ago is cool all by itself. 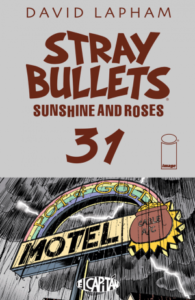 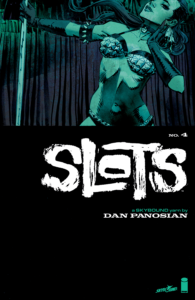 I keep thinking Stray Bullets’s current arc is over, but Lapham keeps finding new ways to extend it, recombining his characters and shuffling their goals, all the while subjecting dozens of civilians and supporting actors to the collateral damage implied by the book’s title.  This is high-quality noirish crime fiction, currently involving a trio of fugitives on the run with a suitcase full of cash, another one full of cocaine, and a whole bunch of people in pursuit; it’s shockingly violent and sometimes laugh-out-loud funny, and this issue is as good as any to dip into it, sample the circus, and then 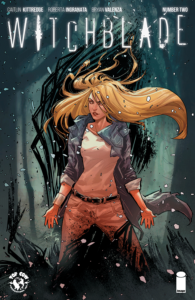 back up to the beginning to see how everyone got that way. Slots is much the same, although its own  violence is confined to the boxing ring, at least in this issue; its Las Vegas setting still gives creator Dan Panosian plenty of panels to present babes, grifters, losers and high-rollers, all in his Frank Frazetta-ish style. Witchblade continues its relaunch via a new character with the title artifact, which is all to the good — the “finding out about the powers,” and its reveals of the backstory, are usually the best parts of a franchise like this.  Writer Caitlin Kittredge, who’s well established as an author of fantasy novels, knows how to 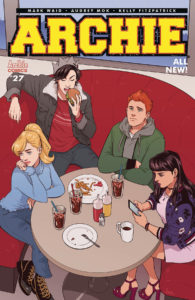 set up an effective story, and you can see from the cover over to the left there how Roberta Ingranata does on the art (there’s a master’s thesis topic waiting for someone to go back and compare the totally-male-written Michael Turner/Marc Sylvestri 1995 original early run to this one…).  Archie‘s latest, #27, feels like a conclusion — it resolves a number of subplots, and the last few pages are a callback to the beginning of this incarnation’s first issue; I had to look to see if writer Mark Waid was leaving the book. He’s not, but it does feel like the end of Archie Year One, and it’s impressive how Waid’s got the backstories in place and relationships stabilized and everything back to something resembling the book’s eternal triangle again.

With 40 years of experience in comic reading, collecting and reviewing, English Professor Phil Mateer has an encyclopedic mind for comics. Feel free to ask Phil about storylines, characters, artists or for that matter, any comic book trivia. He will post your questions and answers on the AABC blog. His knowledge is unparalleled! He is also our warehouse manager, so if you are looking for that hard to find comic book, ask Phil!
View all posts by Phil →
This entry was posted in New Comics, Reviews and tagged Archie, Avengers, Deadman, Gwenpool, Harley Quinn, Hawkeye, Mister Miracle, Runaways, Slots, Squirrel Girl, Stray Bullets, Venom, Witchblade, Wolverine, X-men. Bookmark the permalink.