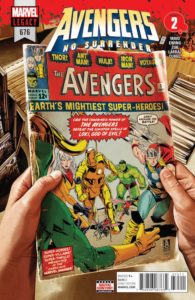 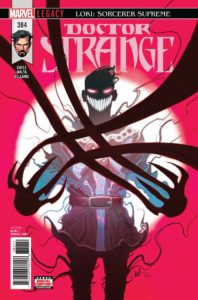 Avengers continues its weekly “No Surrender” story, involving all the myriad Avengers (plus one retconned one — see that Avengers #1 issue on the cover? I looked at it a couple of times before I noticed the difference…), involving the Earth being stolen and two alien super-bad-guy teams — Thanos’s Black Order and the Lethal Legion — using it as 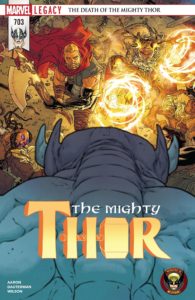 a battleground. Plenty of action, a decent writing team and a literally-explosive cliffhanger should make this worth a look for anyone who’s ever followed the group, in any of its incarnations.  Doctor Strange continues new writer Donny Cates’s first story, involving Loki inadvertently (maybe… you can never tell with the God of Mischief) becoming Earth’s Sorcerer Supreme, and Doc using the Sentry to try to get enough power to take his old job back. New-blood writers like Cates are often fun, because they take characters in unexpected directions, and this is no exception — except that the book does commit a cover crime that’s a pet peeve: the cover’s pretty much the cliffhanger reveal of the comic’s last page, meaning it should be the cover to next issue instead of 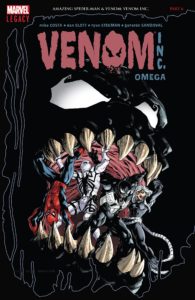 spoiling this one. That’s an Editing 101 mistake, not the writer’s fault, but it’s still a jarring note in an otherwise-solid book. Mighty Thor seems to be moving toward a conclusion of the Jane-Foster-as-Thor storyline (titling an arc “The Death of the Mighty Thor” tends to raise suspicions about that a bit), as the unstoppable Mangog is methodically smashing through Asgard, and the cancer-stricken Foster is confined to a hospital bed, having been told that one more transformation will kill her. Aaron and Dauterman have been on this book for years now, and their major theme has always been the nature of godhood: is it power, or compassion, that worshippers want from their deity? Odin represents one pole of that question, while Foster is the opposite, and the nature of this final story —

and the nature of the Mangog itself — indicates that they’ve been planning it from the start; that kind of long game is something that serialized comics can do better than almost any other medium, and it’s impressive to watch it being played out here. Venom Inc.: Omega is the conclusion of the crossover story that’s been flipping between Amazing Spider-Man and Venom, and offers a finale that should be satisfying to fans of both books, with a lot of action and a resolution that changes a number of the supporting characters — especially Flash Thompson and the Black Cat — as Spider-writer Dan Slott begins to wind down his long tenure on ASM, with one more big arc (involving, predictably, Norman Osborne and his quest to become the Green Goblin) still to come. Spectacular Spider-Man scribe

Chip Zdarsky is much more of a newcomer to Spidey’s adventures, but he’s managed a deft combination of humor and adventure so far (and it doesn’t hurt that he has Andy Kubert on the art), while the book’s “Legacy” renumbering means that next month is a big anniversary issue; that means this week’s installment has a bunch of heroes and villains colliding, with lots of the good guys in danger and a cliffhanger reveal that should bring us all back for the #300 conclusion.  Champions is doing a membership-drive issue (although, in another Marvel comic-cover gaffe, the central figure on the cover never actually shows up inside), but it gets by, as always, on Humberto Ramos’s art (there’s a really nice Ironheart/Hulk one-page scene) and on Mark Waid’s sudsy, continuity-savvy script. 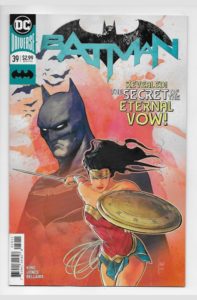 DC’s introducing a bunch of characters in its “New Age of Heroes” line, and, to judge by its first entry, Damage, they think what the kids really want is 1990s Image comics; it’s Tony Daniel drawing a Hulk monster-within-me knock-off similar to his The Tenth: pretty to look it and serviceably plotted, but not particular “new.” Recycled stuff is a theme this week: Batman #39 has Batman and Wonder Woman trapped battling in a demonic dimension for, to them, 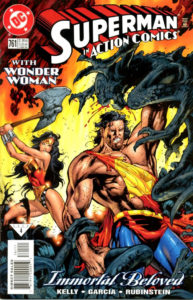 years, and being tempted to have a romance; in Action Comics #761, written by Joe Kelly in 2000, Superman and Wonder Woman are trapped battling in a demonic dimension for, to them, centuries, and are tempted to have a romance. Batman writer Tom King said on Twitter   that he hadn’t read the Action story until this week, when fans brought up the similarities, so it’ll be interesting to see where the second part of it goes (the Action story was a one-shot); it has the advantage of 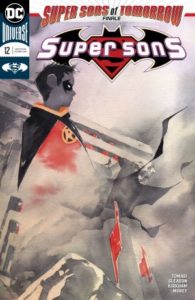 distinctive art from Joelle Jones, who, for someone best known for her well-dressed Kennedy-era suburban-housewife contract assassin in Lady Killer, shows an aptitude for the more-barbaric, Conan-like slaughter here. Super Sons concludes the Future Titans crossover story it’s been running with Teen Titans and Superman.  If you have a soft spot for those Geoff Johns creations, or alternate-future/Hypertime tales in general, it’s pretty good, and the odd-couple interplay, and tentative friendship,  between the cynical, worldly-wise Damien and the more idealistic, innocent Jon is dependably fun. 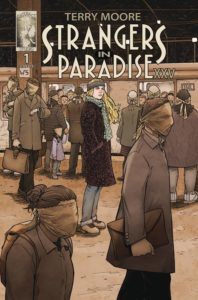 Of the indy first issues this week, Strangers in Paradise XXV is a mini-series revival of Terry Moore’s long-running ’90s and ’00 series (the “XXV” in the new title is because the first issue of the original series was published in 1993, 25 years ago); it was about a lot of things, but mostly a will-they-or-won’t-they love affair 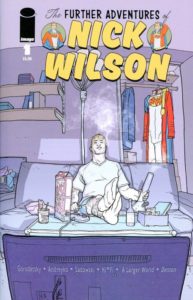 between the fiery, iconoclastic Katchoo and the more naive and normal Francine, who had been friends in high school and then gone their separate ways, with Katchoo becoming an operative for a vast criminal organization. Combining adventure, comedy and soap-opera-level romantic complications, it’s had a long life as a well-regarded series of trade collections since it ended ten years ago, with the two together raising kids in Hawaii  and the story completed. Now, of course, that’s changed: Katchoo’s past threatens to catch up with her and ruin her happiness, and preventing that is the spur for this new iteration of the series. Moore’s a very good storyteller, and this promises to tie into the other series he’s done since then (this first issue connects to his Echo, and there’s also supposed to be a link to Rachel Rising); whether you’ve read the other stuff or not, though, this is good work, and well worth your time. The Further Adventures of Nick Wilson is one of those comics created by someone famous in another field. Co-writer Eddie Gorodetsky 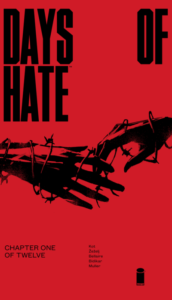 is a long-time collaborator with TV producer Chuck Lorre, and has done a lot of scripts for shows like Two and a Half Men and, especially, The Big Bang Theory, so he knows comedy; smartly, the book tries to avoid the typical rookie-comics-scripter issues by bringing in veteran writer Mark Andreyko as a partner. It’s about a superhero who’s lost his powers and is now kind of a stoner slacker, eking out a living with convention signings and appearances at kids’ birthday parties; he’s a decent guy, but has no idea what to do with the rest of his life, and the book’s strong characterization, gentle humor and clear art make it easy to like. Days of Hate may be the first Age of Trump comic; it’s set in 2022, and sees an increasingly-polarized America with the alt-right firmly in power, and a growing resistance to it being tracked down and put into detention camps by government agents. How you feel about it will depend largely on your own political views (and whether you like seeing contempo-Nazis shot in the head), but Kot is an effective suspense writer, and the art by Zezelj is shadowy, sexy and cinematic (there’s a double-page spread of a city and its freeway system that’s very good-looking, and beautifully colored by Jordie 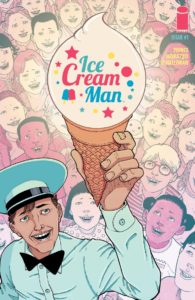 Bellaire), so whether you argue that the current administration is leading us to a utopia, or a dystopia, you might get a charge out of it.  Ice Cream Man is a horror book, and it’s hard to tell at first whether the title character is one of the good guys, or one of the bad ones, but that becomes reasonably clear by the end of this first issue; points for offering a self-contained story, and for raising a couple of legitimate chills (especially if you have a thing against spiders…). It will be interesting to see whether writer Prince can build on this character and his world, and sustain the momentum, but this first story definitely does its job of making readers want to come back for more.

Will Eisner’s The Spirit: The Corpse Makers #5 (of 5) — Creator: Francesco Francavilla

Assassinistas, about three women who were a killers-for-hire team back in the day, but now are at loggerheads, plays like a cockeyed sequel to Kill Bill, and has art by Gilbert Hernandez, who is like unto a comics god and reason enough to get it.  Mage continues Matt Wagner’s final volume of his almost-four-decades-long trilogy about a reluctant monster hunter who’s a reincarnation of Arthur Pendragon; this issue, as always, benefits from his careful, open-natured art and deep-dive plotting and themes, with the return of a couple of previous characters (one in flashback), and a new monster to fight. It’s not a bad 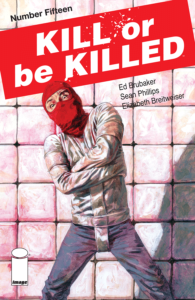 sample issue — and, if you like it, there’s a rich but not overwhelming backstory; start with Volume One, Mage: The Hero Discovered (told across four trades), and then read Mage: The Hero Defined (with two more), and you’ll be ready for the current adventures. Kill or be Killed opens with the narrator/vigilante/main character in a mental ward, then backs up to show how he got there; the question of whether he’s got an actual demon urging him to kill people whom he thinks deserves it (one a month, or he dies, as per the series title) isn’t quite clear yet, but definitely getting there, and the Brubaker/Phillips team is expert at 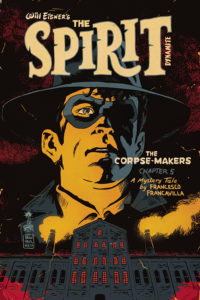 crime/noir/occult mashups, so if you have any love for any of those genres you should be reading this book. The Spirit: The Corpse Makers finally releases its concluding issue (the previous one came out in April of last year), so if you bought the earlier ones and despaired of ever reading the resolution… well, here it is; all the loose endings and plot points (assuming you can remember them) get tied together neatly, and Francavilla does a good job of melding his own pulpy, dark-shadowed style with Eisner’s — you can tell that Will was one of his early influences, and the affection for the characters comes through clearly.

With 40 years of experience in comic reading, collecting and reviewing, English Professor Phil Mateer has an encyclopedic mind for comics. Feel free to ask Phil about storylines, characters, artists or for that matter, any comic book trivia. He will post your questions and answers on the AABC blog. His knowledge is unparalleled! He is also our warehouse manager, so if you are looking for that hard to find comic book, ask Phil!
View all posts by Phil →
This entry was posted in New Comics, Reviews and tagged Assassinistas, Avengers, Batman, Champions, Damage, Days of Hate, Doctor Strange, Ice Cream Man, Kill or be Killed, Mage, Nick Wilson, Spider-man, Strangers in Paradise, Super Sons, The Spirit, Thor, Venom. Bookmark the permalink.