So, I was too lazy to do a top-ten list for 2017, but if you’re interested you can do it for me: just go here , look for the “Archives” section over on the left, read all 52 of my weekly comics reviews for the year, and decide from that. I will say that Tom King, writer of both Mister Miracle and Batman, would have been the only creator with two books on the list, although Donny Cates (Redneck, Baby Teeth, God’s Country, Doctor Strange, Thanos), Kieron Gillen (The Wicked and the Divine, Star Wars: Captain Aphra, Uber) and Rich Tomasso (She-Wolf, Spy Seal) might have come close, and of course there are a bunch of creative people/teams who just kept doing one book really well all year: Rick and Morty, Lumberjanes, Stan Sakai’s Usagi Yojimbo, David Lapham’s Stray Bullets… and, well, if you want the other candidates, go read those reviews. Meanwhile, in 2018: 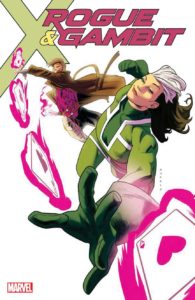 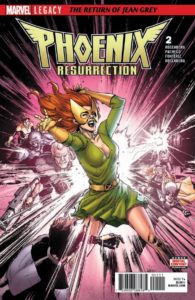 Kelly Thompson’s Hawkeye would have made that best-of-2017 list, too, and her new Rogue and Gambit mini-series about those two star-crossed lovers and X-Men is bright, affectionate and energetic; it reads like it’s by someone who loved those characters as a kid and can’t believe she’s 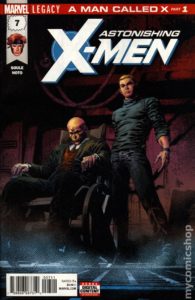 getting to write their adventures now. Phoenix: Resurrection continues its five-issue weekly series with the Phoenix Force on Earth and everyone scrambling to figure out what it’s doing (although if they’d read the last few months of Jean Grey, they’d know…); meanwhile, a redheaded small-town diner waitress named Jean has an on-again off-again boyfriend named Scott who just came back into town, weird dreams, and a new customer named Eric who looks a lot like Magneto… and that’s the kind of slow narrative build you 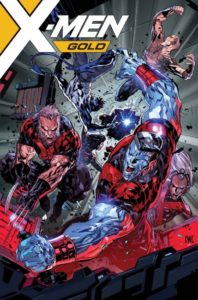 can get away with when you’re doing a weekly comic. Continuing the retro theme (it turns out Marvel was serious about that “Legacy” label), Astonishing X-Men sees the return of Professor X, leading simultaneously to the rehabilitation of an original X-Man, the retirement of an annoying one, and the last-page appearance of a Claremont/Byrne-created villain, while X-Men Gold has Kitty and Colossus, together again with Nightcrawler, Storm, Wolverine and Rachel Grey, battling gods and aliens in the Negative Zone; readers of the ’80s or ’90s would be very familiar with these characters, relationships and stories. If all that nostalgia makes you want to 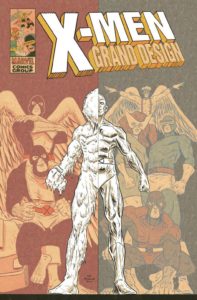 brush up on the tangled history of Marvel’s mutants, look no further than Ed Piskor’s X-Men: Grand Design, a six issue-mini-series that’s a fever-dream retelling of the first 300 issues of Uncanny X-Men; the debut covered all the events in everyone’s lives before that 1963 X-Men #1, while this week’s issue takes forty pages to go from there to the book’s 1970 hiatus with issues #65 and 66 (the former, by Roy Thomas and Neal Adams, being the first time Professor X returned from the dead — but, as we’ve seen, certainly not the last…). This is an iconoclastic, enthusiastic production from an obvious fan, and anyone who’s ever followed Marvel’s mutants should have a lot of fun with it. 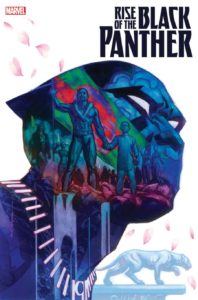 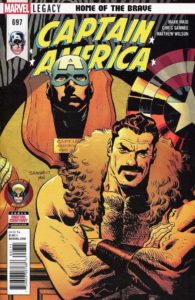 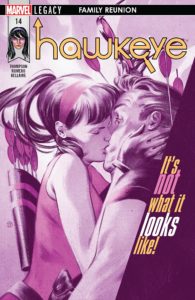 Rise of the Black Panther is an origin story, timed for T’Challa’s movie next month;  this first issue covers the reign of T’Chaka, the father, and the young prince’s reaction to his death.  Writer Evan Narcisse is a fan made good (he’s written a column about comics for io9 for years), and, like Piskor, is stitching bits and pieces from multiple sources into one coherent story; he’s a big fan of the Christopher Priest Panther era (this first issue opens with a WWII-set scene from it), so this has a chance to be 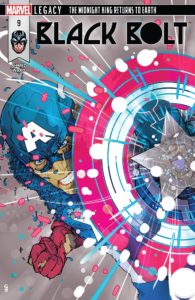 pretty good.  Captain America‘s second issue by the Waid/Samnee team involves Kraven and a The Most Dangerous Game set-up; it’s a tad obvious, but there’s an effective cliffhanger, and Chris Samnee draws the hell out it.  I already mentioned Kelly Thompson’s Hawkeye as one of my favorite comics of last year; its stubbornly-optimistic, part-softy, part-hard-boiled detective heroine is aimed squarely at smart teenage girls, but the rest of us can appreciate its quality work, too.  Black Bolt tied for last year’s make-a-B-list-character- 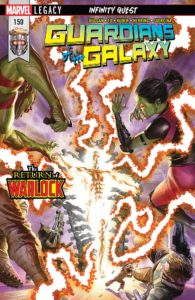 interesting award with Mister Miracle, and in fact writer Ahmed has some of Tom King’s knack for emphasizing the quieter scenes over the action ones; a woman hearing about her husband’s death carries more weight than a multiple-superhuman fight, and Christian Ward’s glowing-colored, dreamlike art doubles the effect.  Guardians of the Galaxy #150 is a double-sized anniversary and finale, with the team splitting, the return of Adam Warlock, and a segue 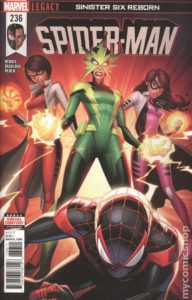 into next month’s Infinity Countdown series, with Thanos, Infinity Gems, cosmic entities and other elements  conveniently prominent in Marvel’s second 2018 movie: Avengers: Infinity War on May 4.  That leaves Spider-Man, with Miles Morales fighting a new version of the Sinister Six; considering that series creator Brian Michael Bendis is leaving after this arc, and that events in his Spider-Men II indicate that Morales will be giving up his arachno-identity then, it’s a good time to check in, not least because Bendis and Bazaldua are offering a smooth, action-filled story that’s clear despite its many moving pieces, and easy to like. 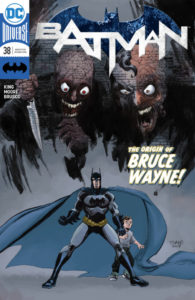 I was mentioning up top how good a year Tom King had, and this Batman issue’s a good 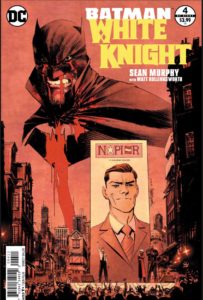 example — it’s a one-shot story, about a kid whose parents are murdered and whom Bruce Wayne tries to help. Saying anything else would involve spoilers, and it’s too good for that; just buy it and read it (it’s dark, too, and an indication of King’s range, after a couple of relatively light-hearted super-friends issues with Clark Kent). Batman: White Knight continues Sean Murphy’s tale of what happens when the Joker gets on medication to control his psychosis, and starts to become a good guy… maybe, as Batman himself seems to get increasingly out of control. It’s been unexpectedly good, with the only knock against it being that it doesn’t “count” (it decides that there are actually two different “Harley Quinns” — the Paul Dini Batman Adventures jester-suited 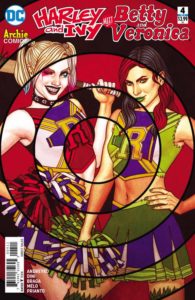 one, and the more modern Suicide Squad one, who’s mad enough about her puddin’ changing sides that she decides to become the new Joker herself), but as long as you don’t mind the “Elseworlds” tag, it’s addictive. So is Harley and Ivy Meet Betty and Veronica, which sees those two dynamic duos body-swapped; this one actually could be in canon, and Dini’s involvement gives it some authority; fans of all four women should find it a lot of fun. That leaves Exit Stage Left: The Snagglepuss Chronicles, which I think we can all agree to just call Snagglepuss.  It’s part of DC’s modernization of the Hanna-Barbara properties into a  Roger Rabbit-like humans-and-animated-characters-coexisting world (see Ruff and Reddy), and it imagines the pink lion as a closeted Tennessee Williams-esque famous playwright during the early 1950s, sparring with the 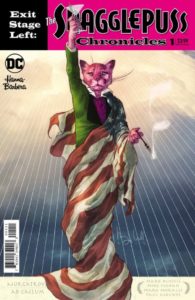 House Unamerican Activities Committee during the Communist scare. That’s… an unexpected direction to take the character in, but writer Russell showed a keen sense of social satire and character nuance on his last book, The Flintstones (of all things), and makes it all work here, too, with guest-starring appearances both real (Lilian Hellman, Dorothy Parker) and animated (Huckleberry Hound).  The only complaint is that Snagglepuss’s “voice” in the cartoons (Daws Butler doing Bert Lahr) is nowhere in evidence;  those voices were the best thing about the original characters, and if you don’t even use them here, what’s the point? 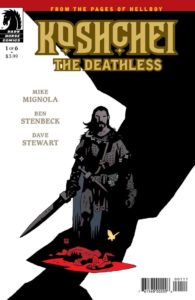 Koshchei the Deathless may have an unpronounceable name, but never fear: it’s written by Mike Mignola, and the first four pages guest-star Hellboy in a framing sequence involving the title bad guy in hell, having a drink with him 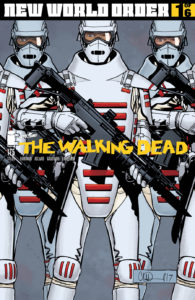 and recounting his origin. Ben Stenbeck has become very good at duplicating the creepy, black-shadowed Mignola style, and this tale of dragons, demons, murder and other dark doings should be particularly satisfying to fans who’ve been following the various denizens of the Mignolaverse for decades.  Walking Dead almost never gets mentioned here, but this week’s issue starts a new arc, involving part of the group traveling a long way west from Alexandria to find another community — a much larger and, in some ways, more civilized one. Killer last panel, too, and a totally unexpected one; Kirkman says on the letters page that it will lead to either “the most positive and optimistic story in TWD 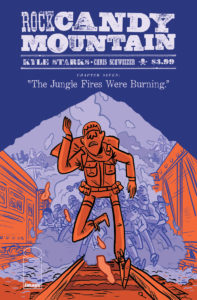 history… or the darkest one…,” and that tension is what’s kept the storytelling on this book fresh for, now, fifteen years. Finally, Rock Candy Mountain is an early-20th-century hobo fable involving the search for the mythical paradise of the title, a deal with the devil, a lot of research into hobo lingo, sharply-drawn characters, and, in this penultimate chapter, lots of action and a well-built plot that’s paying off handsomely. In a folk tale, every element has larger echoes and implications about the culture of the tellers, and Starks’s minimalist style, with just a few lines saying a lot, is a good match for the wearily-cynical, somehow-optimistic and very American tale being told here.

With 40 years of experience in comic reading, collecting and reviewing, English Professor Phil Mateer has an encyclopedic mind for comics. Feel free to ask Phil about storylines, characters, artists or for that matter, any comic book trivia. He will post your questions and answers on the AABC blog. His knowledge is unparalleled! He is also our warehouse manager, so if you are looking for that hard to find comic book, ask Phil!
View all posts by Phil →
This entry was posted in New Comics, Reviews and tagged Batman, Black Bolt, Black Panther, Captain America, Gambit, Guardians of the Galaxy, Harley Quinn, Hawkeye, Koshchei, Phoenix, Rock Candy Mountain, Rogue, Snagglepuss, Spider-man, Walking Dead, X-men. Bookmark the permalink.