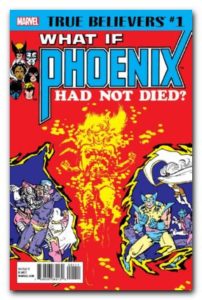 With Phoenix:Resurrection starting this week, Marvel also releases the last three of its only-a-dollar True Believers reprints. What If (Phoenix Had Not Died)? reprints 1981’s issue #27 of that alternate-universe series; Mary Jo Duffy offers a then-rare non-Chris Claremont X-script that posits 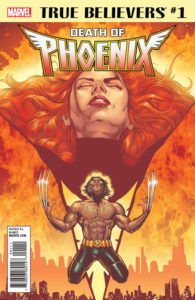 that, if Jean Grey hadn’t died in Uncanny X-Men #137, things would actually have ended much, much worse. Phoenix: Origins reprints the Jean issue of X-Men: Origins from 2008, written by Arizona’s own Sean McKeever, and covers her pre-X-Men relations with her older sister Sarah, and the trauma which first triggered her psychic powers: her best friend Annie’s death; both of these figure in current continuity, so a buck isn’t a bad price to brush up on them. The Grant Morrison/Phil Jimenez/Andy Lanning Death of Phoenix reprints 2003’s New X-Men #150, the last time

Phoenix was alive and the capstone to the best run on any X-title in the last two decades; it’s a bargain and, if you’ve never read the Morrison New X-Men stuff, a revelation, but beware: it does spoil the series’ best, and flashiest, plot twist. That leaves the actual Phoenix: Resurrection; as the first of six weekly issues, it’s mostly set-up (and the first scene will make a lot more sense if you bought that X-Men: Origins reprint), but Yu’s drawn a lot of major Marvel events,  and is good at giving both the quiet civilian scenes and the multiple-costumed ones a sense of significance and weight: this will be a hard comic to resist, especially if it sticks to its weekly schedule. 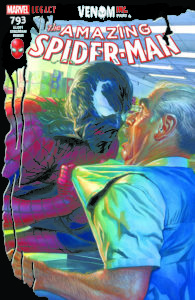 The advantages of a weekly story schedule are clear here, too, as Amazing Spider-Man offers the fourth chapter of the six-part Venom crossover Venom, Inc.: knowing that there are just six chapters in a story and that a new episode will be out every Wednesday makes it easy for readers to stay engaged in the narrative, especially if, as here, all the various creators are obviously on the same page. Besides Phoenix: Resurrection and Venom, Inc., Marvel’s using this weekly format with next month’s big Avengers crossover; it’ll be 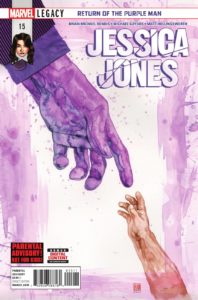 interesting to see whether it proves popular enough to become the new industry standard. Brian Michael Bendis, who’s jumping to DC in a few months, is showing how much Marvel will miss him with three books out this week:  Spider-Men II concludes its Peter Parker/Miles Morales crossover sequel with an apparent major turning point; yes, every series says it’s going to do that, but Bendis’s leaving makes this one especially significant; there’s also a look at the Ultimate Universe, reuniting the Bendis/Bagley team that created it at the dawn of the 21st century. Jessica Jones continues what’s probably, now, its final arc, with the return of Killgrave, the Purple Man reminding us how good the Bendis/Gaydos team was back in  their Alias days; it’s got 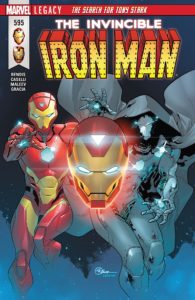 all the original’s paranoia and creepiness (the parts that most inspired Jessica’s Netflix series adaptation) and duplicates  its effective, surreal horror too.  Invincible Iron Man’s last Bendis issue will be #600, and so right now a bunch of pieces — Riri Williams and her garage-built substitute armor, Victor von Doom and his magically-enhanced version (with Doom’s scenes drawn by Alex Maleev), Mary Jane Watson, Tony’s newly-discovered biological mom, Stark’s A.I. doppleganger and a weakened, depilated Tony himself — are intercutting and combining and starting to accelerate towards the inevitable anniversary climax; it’s colorful and fast-paced enough to attract more readers as it picks up speed. 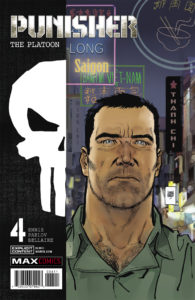 Garth Ennis is our greatest living writer of war comics, and he and Garan Parlov had the best long run ever on The Punisher, so it only makes sense that this account of Frank 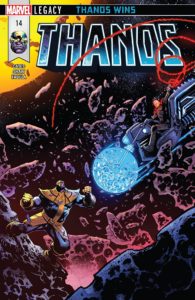 Castle’s first tour in Vietnam, as an inexperienced (but not ignorant) first lieutenant years before his family was killed, would be a balanced, clear-eyed, well-researched and extremely well-drawn look at both sides of that conflict; if you never found the time this year to watch Ken Burns’s Vietnam documentary, it delivers the gist in dramatic, readable and heart-breaking style. Thanos has new writer Donny Cates dealing with how to write a comic about a bad guy when he can’t, like, actually take over the universe or ever truly win: send him to meet himself in the far future, where he has won; Cates 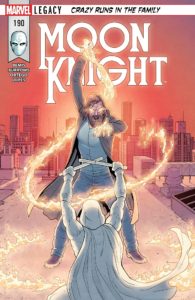 reminds me quite a bit of the young Jason Aaron, when he was turning heads with a similarly imaginative, grindhouse-movie energy and strong characterization, and his work here and on Doctor Strange makes him one of the creators to watch in 2018. Moon Knight‘s got the same kind of B-movie oomph, with unexpected twists and a take on the main character’s multiple personalities that we haven’t seen before; Jacen Burrows got used to presenting simple, straightforward panels of people doing unimaginably horrible things to one another when he was the artist on Crossed, and uses that to good effect here, too, making this another comic to watch as the new year begins. 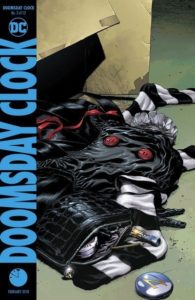 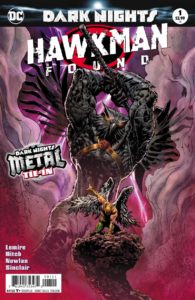 If you’re going to do a Watchmen sequel (assuming you can get past any creator’s-rights arguments from Alan Moore against it), this is the way: Gary Franks handles the nine-panel grid just as well as Dave Gibbons, and Geoff Johns knows how to craft a fan-service story; here, Ozymandias, Rorschach and a few others, looking for the vanished Dr. Manhattan to try to get him to save their world, track him to DC’s earth, where we get scenes like Ozymandias talking to Lex Luthor, and Rorschach exploring the Batcave (and deciding that it’s the home of a master criminal, and all those exhibits must be trophies from his victims…); at issue 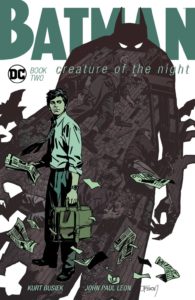 #2 out of 12, this has a long way to go, but so far, so good. Dark Nights: Hawkman Found is just what it looks like: another Metal one-shot, this one coming off the last page of Metal #4, and showing us how Carter Hall figures into it. The way these books have been selling, it needs little encouragement from me, but a glance at the credits, and the creative team of Jeff Lemire and Bryan Hitch, should be all the further incentive readers need to get it.  Batman: Creature of the Night continues its tale of a kid who sees his parents murdered, on a world where “Batman” is only a comic book character, but whose anger and psychic pain manifest a “Dark Knight” anyway — except that, as he gets older, he finds that nothing is quite what it seems. Busiek’s always been good at the small human moral conflicts 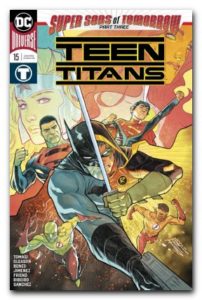 inherent in a superhero world, and those are on full display here, with Leon’s art an effective combination of the realistic and the fantastic. Teen Titans makes the list because it’s part three of the four-part “Super Sons of Tomorrow” arc that’s been winding through the Superman and Super Sons comics this month (and concludes back in Superman next week), involving a future version of Tim Drake coming back to kill Jon “Superboy” Kent before he causes a planet-wide disaster; readers who follow those other books will need this one too, with the added bonus for Teen Titans fans of an appearance by Geoff Johns’s future adult versions of them. That leaves The Ruff and Reddy Show, Howard Chaykin’s Hollywood comeback satire about cartoon characters in a 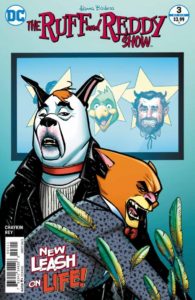 real world.  Artist Mac Rey is good at visualizing what an “older” version of a cartoon would look like, and has an oddly compelling animation style, although he reuses faces and panels so much that it eventually becomes noticeable, and annoying.  However, there’s a bit where Reddy, the dog (why “Ruff” isn’t the dog’s name is one of the great mysteries of early TV animation…) goes on a bender; we’ve come to expect that he’s an alcoholic, but he actually goes to a meeting of Copraholics Anonymous — meaning that what he’s really addicted to is cat poop. That’s perfectly doglike, subtly underplayed,  quintessentially Chaykin… and exactly why I like this comic book. 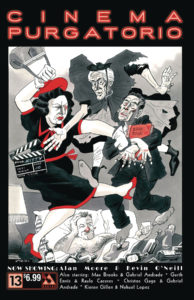 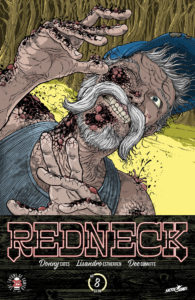 It was a relatively light week for indy titles, but Cinema Purgatorio, the Alan Moore-edited black-and-white horror anthology, is always welcome;  Moore and Kevin O’Neill 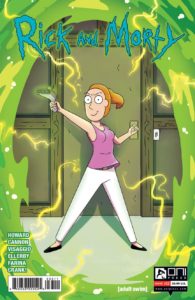 have been using the movies in the lead story to write a funhouse-mirror, twisted-but-true history of film-making, and this time they look at the career of Arthur Lucan, a British vaudevillian who was one of the first male-in-drag acts, dressing up as “Old Mother Riley,” a cantankerous Irishwoman spouting puns and Spoonerisms both on stage and in early English moving-picture shows. The book’s other features all offer new episodes, too, with Garth Ennis and Raulo Caceres’s Code Pru the most poignant,

and the best.  Redneck is Donny Cates again, doing a modern-day Texas vampire comic that’s really about family and prejudice, with surprising plot twists and imaginative élan, ably brought to life by Lisandro Estherren’s gloomy, pitch-perfect art. Rick and Morty keeps us from getting bored with its by-now-predictable format by focusing another issue on Summer, and uses its alternate-universe setup to good effect, undercutting our expectations and giving cynical Rick, as always, the best lines (“My favorite part of hanging out with teenagers is 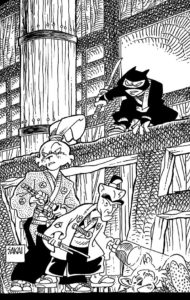 watching their spirits collapse, honestly”). Lumberjanes begins a new arc with the introduction of a new character, a hunt for a jackalope, and the usual friendship/independence/adventure themes; if you’ve been ignoring me talking about what a good comic it is for the last almost-four years, it’s not a bad jump-on issue. So too for Usagi Yojimbo, which has been around for over eight times that long (since 1984) and is still fresh and expertly executed; this conclusion to a three-part murder mystery guest-starring the wise, deceptively-bland Inspector Ishida will show you exactly what you’ve been missing all this time.

With 40 years of experience in comic reading, collecting and reviewing, English Professor Phil Mateer has an encyclopedic mind for comics. Feel free to ask Phil about storylines, characters, artists or for that matter, any comic book trivia. He will post your questions and answers on the AABC blog. His knowledge is unparalleled! He is also our warehouse manager, so if you are looking for that hard to find comic book, ask Phil!
View all posts by Phil →
This entry was posted in New Comics, Reviews and tagged Batman, Cinema Purgatorio, Dark Nights Metal, Doomsday Clock, Iron Man, Jessica Jones, Lumberjanes, Moon Knight, Phoenix Resurrection, Punisher, Redneck, Rick and Morty, Ruff and Reddy, Spider-man, Teen Titans, Thanos, Usagi Yojimbo. Bookmark the permalink.