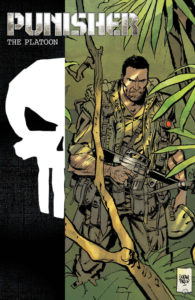 Of the two new Marvel books this week, Punisher: Platoon is the most welcome: a return of Garth Ennis and Goran Parlov, who had a decade-long run on that character that most critics consider the best in his forty-year-plus history. It’s a prequel to Punisher: Born, which was itself a prequel to the main Punisher title, looking at Frank Castle in Vietnam on the tour of duty just before his family was killed. This series goes even further back, to before the Tet Offensive, and a newly-appointed second-lieutenant Castle who’s encountering his first command in-country. Ennis, who’s written a bunch of war comics, knows a lot about the history of the Vietnam era and about soldiers, both good and bad, and the military, and Parlov is one of those artists whose every line is perfect: exactly where it’s supposed to be and exactly what’s needed to tell the story, no more and no less. If you’ve been watching the Ken Burns Vietnam War documentary on TV, this is a decent fictional counterpart, showing both the good men in the field and the corruption, apathy and stupidity of both politicians (in both South Vietnam and the US), and sometimes their own superiors: tough-minded, insightful and very well done. Spirits of Vengeance has no such aspirations: it’s a love note to 1990s Marvel supernatural comics, with Johnny Blaze encountering a stranger who pulls a mysterious bullet out of himself, says to “tell Hellstorm,” and promptly explodes. That, of course, leads to a getting-the-band-back-together bit, as Blaze and Hellstorm do some investigating and hook up with their old partner Blade (and, presumably, Satana, who doesn’t appear in this issue but is right there on the cover), and a vast apocalyptic conspiracy begins to unfold. Decent enough for what it is, and if you grew up on those ’90s Marvel books, you should like it quite a bit. 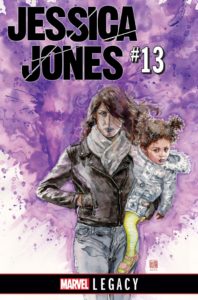 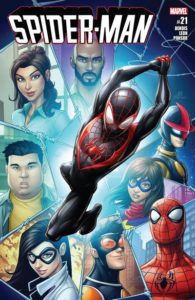 Jessica Jones begins a new arc involving the Purple Man; Bendis and Gaydos’s original story about him, back in Jessica’s Alias days, was the inspiration for the first season of her Netflix series, and this sequel gives us an almost-sympathetic pov scene with him, emphasizes the 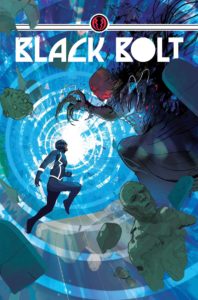 paranoia and dread that he inspires, and finishes on an exquisitely-chilling cliffhanger. Spider-Man (which Bendis has been writing in one way or another since the year 2000) sees Miles in Tokyo, playing hooky and having his motives misinterpreted by the yakuza, led by a technomancer girl not much older than he is; some father-son smartphone bonding lends character, and the action scenes and dialogue are very smooth and easy to like.  Black Bolt ends its first volume with a psychedelically-colored bang, courtesy of 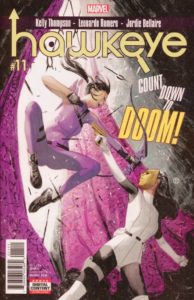 Christian Ward’s sleek, impressionistic art and Saladin Ahmed’s script, which mixes in elements of horror, prison break-out and buddy movies (the latter starring Black Bolt and the Absorbing Man) into the most improbable hit since last year’s The Vision.  Hawkeye concludes its own arc with a face-off between Kate and Madame Masque, who’s stolen her identity. Kelly Thompson’s really good at this kind of YA-friendly, care-about-the-fiesty-characters storytelling, and Leonardo Romero reminds us of  David Aja’s clear-lined, minimalist 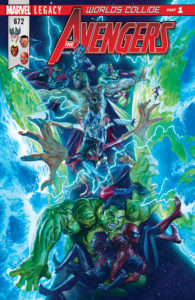 style without ever copying it.  If you know any teen girls who like adventure fiction, the first two trade collections of this series would be perfect for them (and pretty good reading for the rest of us, too).  Avengers reverts to its original numbering with the first chapter of a six-part crossover with The Champions; Mark Waid’s the writer of both series, and Champions split off from his original Avengers run, so it’s a typically-well-told family-reunion story that involves bickering, Counter-Earth, a dimensional-rift meteor that everyone has to use teamwork to whittle down to size, and a last-page bad-guy reveal that Jesus Saiz just absolutely nails. 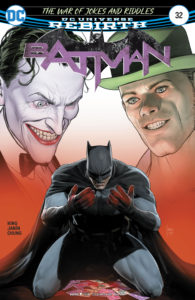 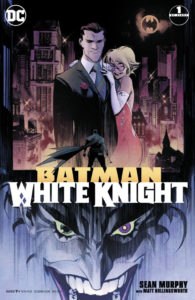 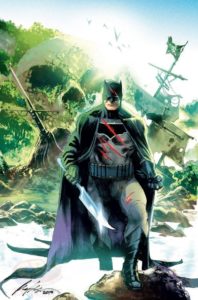 Eight DC books, and every single one is either a Batman comic or features a member of the bat-cast. Batman #32 finally ends the “Joker-Riddler War,” with Bruce Wayne confessing his sins in that conflict to Catwoman, after asking her to marry him; she gives her answer in this issue. That’s been an odd arc, with a hopscotching narrative style and a number of weird angles (Kite Man?), but it all pays 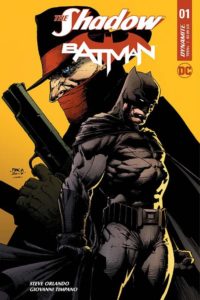 off nicely here, and Janin’s art — and King’s script — do both the Riddler and the Joker justice.  Batman: White Knight also features the Clown Prince of Crime, in the debut of a new mini-series by Sean Murphy (Joe the Barbarian, Punk Rock Jesus); it depends on a sudden, Joker-fueled twist in public opinion that I’d say was unbelievable, but in the “fake news” era makes depressing sense — and the art is nice, if you like Murphy’s precise, crosshatching-heavy style. All-Star Batman ends Scott Snyder’s third — and final, since this is the last issue — arc on the title, this one focusing on Alfred, combining 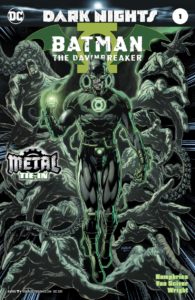 flashbacks to his past with his current role as Bruce Wayne’s mentor/father figure/enabler; it adds layers to someone who’s too often a one-note character. Shadow/Batman, a new six-issue mini-series, would be a tad more welcome if the previous Batman/Shadow series hadn’t ended just last week; that one was from DC, but this one’s from Dynamite (which is why the Shadow gets top billing). Giovanni Timpano’s art isn’t quite as good as Riley Rossmo’s on the earlier story, but to be fair Rossmo got the Joker as his villain, and Timpano gets Professor Pyg; he does draw a good Shadow, something like Frank Robbins’s, 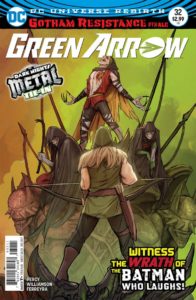 all billowing cape and scarf and piercing eyes, and making Damian a focal character shifts the tone from that earlier tale, too, so it ‘s not merely repetitive; if you like either character, it’s worth a look. Next are the Dark Night: Metal books for the week: the one-shot, Batman: Dawnbreaker, spotlights the alternate-Earth Batman/Green Lantern hybrid (Bruce gets the power ring moments after his parents are shot in that alley, kills the gunman with it, and, without any stabilizing or moralizing influences, becomes a grim Punisher-like engine of destruction). These one-shots are all about establishing the new bad guys as formidable opponents, 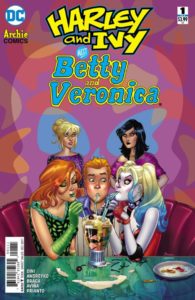 and this accomplishes that effectively. Green Arrow is the conclusion of “Gotham Resistance,” as GA, Damian, Nightwing, Mr. Terrific and Harley Quinn battle through a transformed Gotham City to try to take out the leader of the bat-bad guys: “The Batman Who Laughs,” some kind of Joker/Bat combo variation; obviously, they don’t succeed (this story has a ways to go yet), but a couple of significant clues, and weapons, turn up that will be important later. Harley has two of her own books out this week: Harley and Ivy Meet Betty and Veronica is, you know, exactly what it says; this first issue gets the two bad girls to Riverdale (Veronica’s dad earns Poison Ivy’s wrath by wanting to tear up a wetlands and put in a “Lodge University”), and 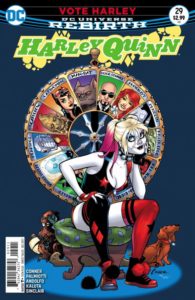 there’s a Hallowe’en party, and Sabrina’s there… it’s reasonably clever and fun and in-character, as you’d expect from a script co-authored by Paul Dini, and while the art’s fine the great Amanda Connor cover makes you wish she’d drawn the interiors, too: look at Harley’s expression, up to the right there, and the grace notes of her three straws and all those little cherry stems. Harley’s own title, co-written as always by Connor and Jimmy Palmiotti, also guest-stars Poison Ivy, and sees our girl still running for mayor of NYC, and getting stalked and fear-gassed by the Scarecrow; her hallucinations lead to a five-page sequence drawn by master comics draftsman Michael Kaluta, featuring Harley, Ivy and the Joker: reason enough for buying this comic, don’t you think? 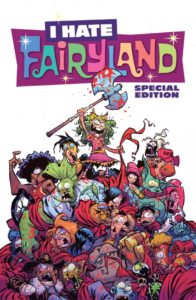 Of the indy first issues, I Hate Fairyland Special Edition is actually a reprint of Skottie Young’s Free Comic Book Day special, wherein his lead character, Gertrude, who’s been driven homicidally insane by being stuck in fairyland for forty years (and still is in a little girl’s body) kills a number 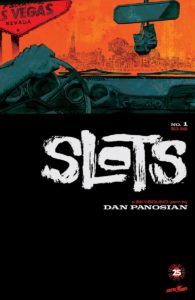 of Image characters, plus all the partners in the company. Pretty funny (Young manages the cuteness/gore combo expertly, as always), especially whenh all the Image creators who aren’t killed start calling him up and wondering why they didn’t rate; if you haven’t been giving I Hate Fairyland a look, this might convince you to do it.  Slots is a new Image book about a genial con-man and boxer who ends up in Las Vegas, trying to help an old friend save her casino from an old enemy. Panosian has a sexy, attractive style that’s about halfway between Mark Shultz and Darwyn Cooke, and this is a fun, easy-to-like story about gamblers, rogues and other fringe-dwellers. 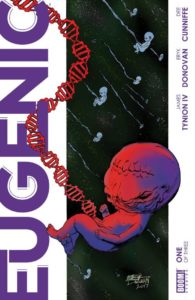 Eugenic is a big-concept tale told in only three parts, about a near-future world where a virus has killed one-fifth of the population, and rendered most women sterile; a young genetic scientist has perfected a vaccine for it, but it turns out there are unintended consequences — or, perhaps, intended ones… Tynion offers a twisty story with a couple of socially-relevant themes, and Donovan’s art handles the human parts well enough near the beginning, but really shines as the book begins to turn into a horror comic near the end; if you’re looking for a Hallowe’en chill without any of the usual cliches of the genre, this might be for you. 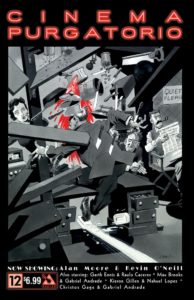 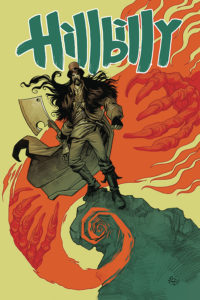 Cinema Purgatorio offers the usual black-and-white horror anthology, anchored by Alan Moore and Kevin O’Neill’s title series, which interlaces a pov story about a woman trapped in a seedy movie theater in purgatory with 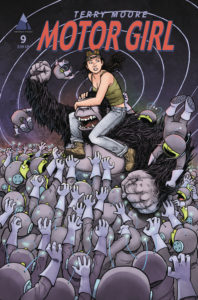 the films shown there, fun-house mirror versions of Hollywood staples with actual Tinseltown history mixed in (this time, an It’s A Wonderful Life knock-off has George invulnerable to harm, because guardian angels absorb any damage, while we also learn about actual Hollywood stuntmen and the many trials they’ve endured). Mix in other ongoing serials, like Garth Ennis and Raulo Caceres’s Code Pru, and you get another quirky Hallowe’en treat. Hillbilly offers horror, 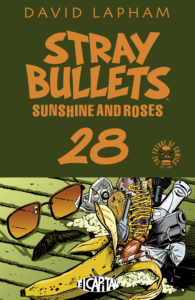 too, with Eric Powell spinning yarns about a  backwoods avenger who hunts witches, goblins and other h’ants, offered in an EC/Southern Gothic style that fans of his Goon series know well. The last three books all come from long-running creators who do both the art and the story solo, giving their work a unity that even the best collaborations can lack: Motor Girl is 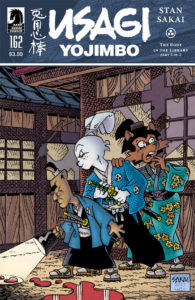 only the latest in a long string of Terry Moore works, from Strangers in Paradise through Echo through Rachel Rising, and has his usual blend of adventure, humor and pathos. Stray Bullets is David Lapham’s sprawling valentine to the hard-boiled film-noir genre, full of tough guys and tough dolls, drugs, guns, money and violence, while Usagi Yojimbo chronicles the adventures of Stan Sakai’s lop-eared samurai, in a labor of love combining Japanese feudal history, anthropomorphic characters, murder mystery and perfect cartoony art.

With 40 years of experience in comic reading, collecting and reviewing, English Professor Phil Mateer has an encyclopedic mind for comics. Feel free to ask Phil about storylines, characters, artists or for that matter, any comic book trivia. He will post your questions and answers on the AABC blog. His knowledge is unparalleled! He is also our warehouse manager, so if you are looking for that hard to find comic book, ask Phil!
View all posts by Phil →
This entry was posted in New Comics, Reviews and tagged Avengers, Batman, Black Bolt, Cinema Purgatorio, Eugenic, Green Arrow, Harley Quinn, Hawkeye, Hillbilly, Jessica Jones, Motor Girl, Punisher, Skottie Young, Slots, Spider-man, Spirits of Vengeance, Stray Bullets, The Shadow, Usagi Yojimbo. Bookmark the permalink.