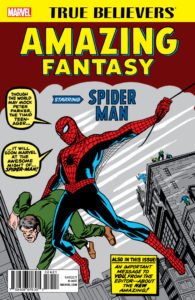 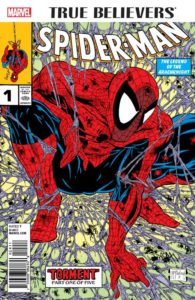 At only $1, these “True Believers” reprints are both great all-ages gifts and smart marketing tools, introducing new readers to Spider-Man’s long history. Amazing 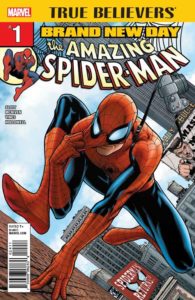 Fantasy offers the eleven-page origin, a stark Lee-Ditko morality tale, and then adds a retro Spider-Man/Iron Man/Vulture reprint from the high-school-set Spidey #6, by Robbie Thompson, Andre Lima Aravjo and Jim Campbell, that should resonate with fans of the new movie. Spider-Man #1 is the ’90s Todd McFarlane auteur effort, while Brand New Day is the first of the Peter-never-married-Mary-Jane current continuity, by Parker’s current writer. 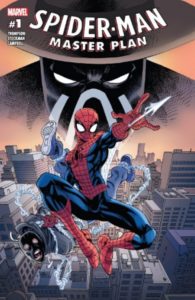 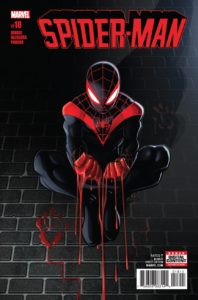 More Spidey, plus a little Deadpool: Spider-Man: Master Plan offers a new Spidey-in-high-school story from Thompson,  along with reprinting the first appearance of the Vulture, from Amazing Spider- 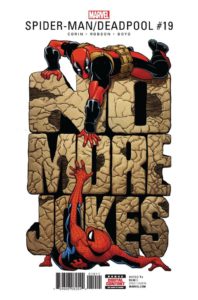 Man #2, that shows just how quickly Lee and Ditko were able to surround their hero with a strong supporting cast and sharply-drawn high-school and New York City settings. Spider-Man #18 has to resolve last issue’s cliffhanger, with wise-guy mobster Hammerhead about to beat the less-experienced, revenge-clouded Miles half to death; he’s saved by an unlikely ally who’ll be familiar to readers of Bendis and Chris Bachalo’s Uncanny X-Men, and, despite a couple of 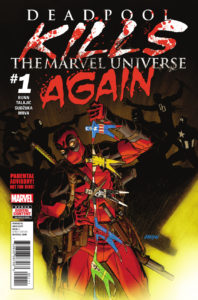 ominous subplots, the book’s got a refreshingly-optimistic tone, and some good moments with Miles’s mom. Spider-Man/Deadpool acts on the cover like it’s going to go grim, but then guest-stars Slapstick, and the new creative team manages to keep most of the mix of serious, snarky and awkwardly bro-mantic that’s made the previous issues such a steady seller. Deadpool Kills the Marvel Universe Again has a plot, and maybe too much of one, because you really don’t care what it is; you just want to see how Wade dispatches, say, most of the Asgardian and Olympian gods, and on that level this first issue accomplishes its mission. 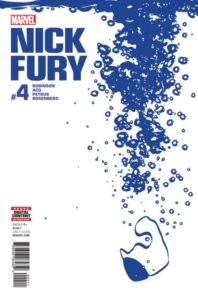 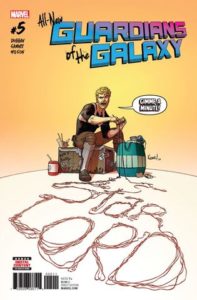 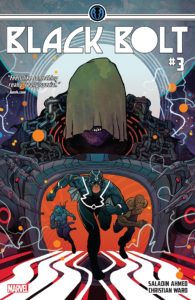 Nick Fury sees James Robinson showing off his ability to spin self-contained, one-issue spy thrillers with cool artists; he’s better at it than anyone this side of Warren Ellis. All-New Guardians of the Galaxy‘s got a mostly-solo Star-Lord quest involving his cassette tapes, with a couple of affectionate nods to ’80s music maintenance; the art’s by Chris 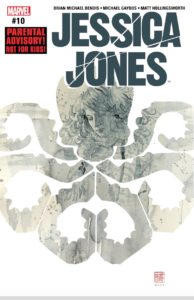 Samnee, whose carefully-considered retro/modern style elevates everything he touches, the way Darwyn Cooke’s used to over at DC. Black Bolt is turning into this year’s Vision, with a largely-unknown creative team taking a B-list character and making him sing through sophisticated storytelling and imaginative, colorful art. Instead of King’s creepy suburban paranoia, Ahmed’s got an interstellar Prisoner riff going, and there’s a horrific, chilling double-page splash reveal near the end that Ward just absolutely nails. Jessica 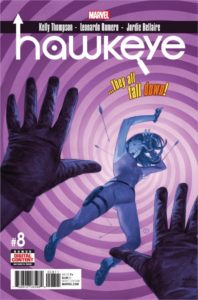 Jones has its own nice art, with original Alias artist Gaydos teaming with Bendis (him again…) as Jessica tries to deal with her new client: Maria Hill, on the run from S.H.I.E.L.D.; it’s the irascible investigator’s irritation with all the super-spy shenanigans and LMDs — and her dogged determination to do right by her client, even though she can’t stand her — that makes the story work.  Hawkeye sees Kate dealing with her corporate-criminal father, an underground fight club and Madame Masque; Thompson’s really good at 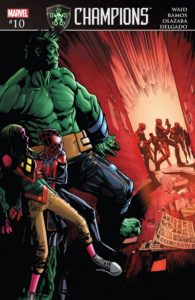 heroic-but-realistic women characters, and if you liked the Fraction/Ajo run of this title, this has much of the same entertaining combination of sass, grit, humor, drama and crystal-clear, modern-looking art. Finally, there are two Mark Waid-written Avengers-family books: Champions has its idealistic young heroes dealing with a Hydra-government-run internment camp for Inhumans, and realizing — as they often do in this title — that (a) there are no quick or easy solutions, and (b) that they can rise above them and do the best they can anyway; it’s able to get across 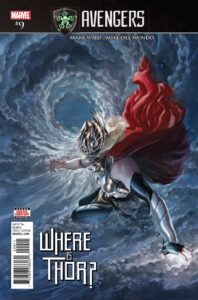 some serious themes and still be fun, especially thanks to the crisp, just-cartoony-enough Humberto Ramos art. Avengers is actually a Jane Foster Thor solo story, as the events of the previous issue see her lost in another dimension, without her hammer. Waid, like Kurt Busiek, is really good at character-rich sf and fantasy stories, and this one-off has tons of action and is satisfyingly complete; between the other-worldly, color-drenched del Mundo art and the Alex Ross cover, they do right by the Thunder Goddess, too, and make us hope she’ll stick around even after the son of Odin inevitably picks up Mjolnir again. 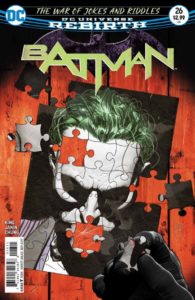 Sorry, DC fans, but with both Marvel and the indy companies producing so much worthwhile stuff, Batman was the only comic from the house of Superman that I actually bought this week. It’s the second part of Tom King’s version of a Year One/Zero Year tale, with the Caped Crusader recounting to Catwoman how a war between the Joker and the Riddler caused deadly collateral damage to Gotham’s citizens. Mikel Janin gets tons of great stuff to draw, with both the Joker and the Riddler looking suitably, quietly psychotic, and there are two double-pages splashes near the end, one for each antagonist and his allies, that indicate just how darkly fun this arc should be. 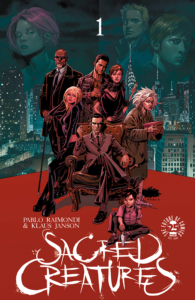 Three indy debuts, plus a sophomore issue: Sacred Creatures goes first because it offers more than 64 pages of story — three times a regular comic’s — for 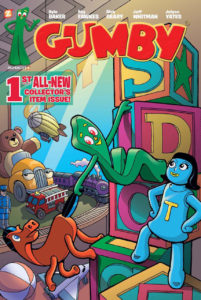 its $4.99 intro, giving readers a satisfying chunk of narrative.  It looks like Raimondi’s a big fan of writer Mike Carey, because this story of a regular guy swept into a conflict between immortals has a lot of his themes and rhythms, especially from his Lucifer run; the detail and imagination in both the art and story mark this as a book to watch. Gumby is an all-ages comic based on the classic claymation character, and it’s clear the producers are unabashed fans: there’s a two-page article on Gumby originator Art Clokey, two very attractively on-model ten-page episodes drawn by Jolyon Yates (and written by Jeff Whitman and Ray Fawkes), plus 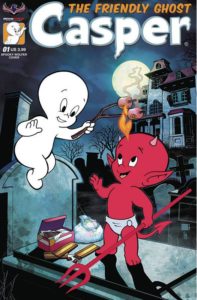 a five-page effort from Kyle Baker in his own animated style, plus ads for the DVD collections of the original TV series; it’s an effective package that should help introduce its 60-year-old flexible green protagonist to a new generation of readers. So too for Casper the Friendly Ghost, which (unlike the Harvey Hits book from a few weeks ago, which gave versions of Casper, Hot Stuff, Wendy, et al. in more of a modern Adult Swim style) sticks to the classic versions of its crew, mixing reprints of older stories from creators like Warren Kramer and Howie Post with new ones (one by S.A. Check, Bill Galvan and Bob Smith, and another by Mike Wolfer and Diego Jourdan). The publisher, American Mythology Productions, also has ads for 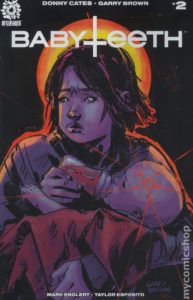 upcoming Underdog, Pink Panther and Rocky and Bullwinkle comics; their careful crediting of the reprints, and their obvious affection for the source material, mark them as a Dell Comics (or maybe a Gladstone) for the ’10s, and more kid-oriented books are always welcome. That leaves Baby Teeth, about a child but not for them, since its infant is much more like the demon from The Omen than Baby Huey; Cates, as he’s been doing with his other books all year, takes an established genre, in this case occult horror,  and adds enough twists and sharp characterization to make it interesting and eminently readable. 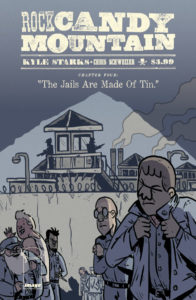 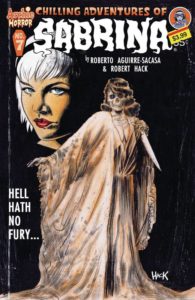 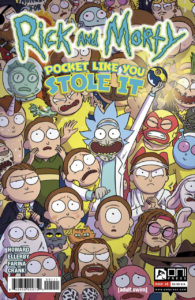 The remaining indy books: Rock Candy Mountain has a minimalist cartoon style, but don’t let that fool you: there’s a prison fight here that’s as well-choreographed and brutal as any of those hallway fights on Netflix’s Daredevil or Iron Fist, and the story, about hobos riding the rails in early-20th-century America, combines folklore and fact into a 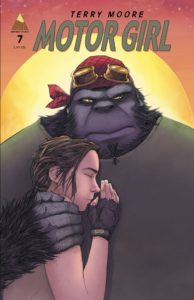 smooth, compelling story. Sabrina returns after a long absence, with another chapter of its grown-up horror version of the teenage witch; we find out quite a bit about the history of her immediate family, especially her father, and what’s really going on with her reanimated dead boyfriend Harvey (and if that sounds intriguing, you’re probably the right audience for this comic…).  I could have included Rick and Morty: Pocket Like You Stole It  with the other #1s, but it’s really just another issue of the regular 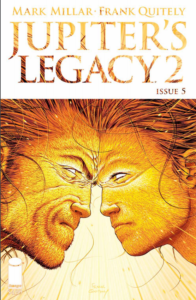 comic, except in multiple parts, this time concentrating on all the multidimensional versions of Morty, and a Rick who’s treating them like collectable Pokemen (hence the title); if you’ve liked previous issues of the book or the TV cartoon, you’ll like this too.  Motor Girl continues Terry Moore’s mix of UFOs, black-ops agents, and a junkyard mechanic, damaged by her experiences in the military in Iraq, with a (probably) imaginary gorilla as a confidante; this issue’s got the same mix of humor, adventure and sometimes- 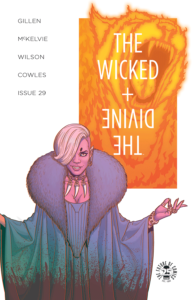 heartbreaking tragedy that all his stories have, so it’s a good introduction to his work if you’ve never read Strangers in Paradise, Echo or Rachel Rising. Jupiter’s Legacy 2 concludes the second volume of Mark Millar and Frank Quitely’s superheroes-take-over-the-country yarn with an all-out slugfest; Quitely draws this kind of thing as well as anyone, and Millar knows a lot about crowd-pleasing action, so even if this issue is so late that you can’t remember the plot, it’s still entertaining. Just

like the Millar/Quitely match, Kieron Gillen/Jamie McKelvie and David Lapham/David Lapham are dependable writer/artist teams (Lapham, like Terry Moore, does it all on his own); that means even a random issue of their long-running series like The Wicked and the Divine or Stray Bullets can be a revelation if you’ve never read it before, and set you on the path to a lot of back-issue or trade-collection browsing. Snotgirl boasts a dream team, too, between Bryan Lee (Scott Pilgrim) O’Malley’s 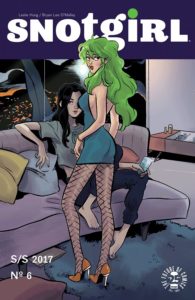 writing and Leslie Hung’s modern manga-fashionista art; this issue’s about taking a breath and filling in some character and plot points, so it might not be the best place for new readers to start, but the story about a clueless social-media star with severe allergies (hence the title) has an offhand, subtle humor and surreal, disorienting zip to its plot that makes it worth tracking down; fortunately, the first volume of the trade collection contains the first five issues, making it easy to get up to speed for this week’s issue #6 continuation.

With 40 years of experience in comic reading, collecting and reviewing, English Professor Phil Mateer has an encyclopedic mind for comics. Feel free to ask Phil about storylines, characters, artists or for that matter, any comic book trivia. He will post your questions and answers on the AABC blog. His knowledge is unparalleled! He is also our warehouse manager, so if you are looking for that hard to find comic book, ask Phil!
View all posts by Phil →
This entry was posted in New Comics, Reviews and tagged Avengers, Baby Teeth, Batman, Black Bolt, Casper, Champions, Deadpool, Guardians of the Galaxy, Gumby, Hawkeye, Jessica Jones, Jupiter's Legacy, Motor Girl, Nick Fury, Rick and Morty, Rock Candy Mountain, Sabrina, Sacred Creatures, Snotgirl, Spider-man, Stray Bullets, Wicked and the Divine. Bookmark the permalink.