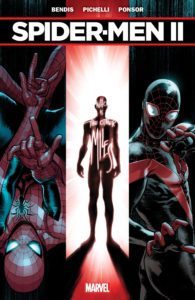 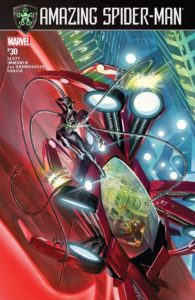 Spider-Men II is a sequel to the five-year-old Spider-Men, also by Bendis and Pichelli, which brought together the Marvel and Ultimate-Universe Spider-Men for the first time; it stems from a scene at the end of the earlier series where Peter Parker, curious about his own universe’s version of Miles Morales, Googles him and then looks shocked, but with no explanation. Now that the Ultimate Miles is part of the regular Marvel continuity, thanks to the Molecule Man, the end of Secret Wars II and a timely old hamburger (oh, Jonathan Hickman, we miss you…), the two arachno-themed heroes team up, and, courtesy of a dimensional vortex, will presumably get some answers. Bendis created Miles, and Pichelli’s drawn more of his adventures than anyone else; her graceful, detailed

art and his dialogue and continuity-rich plotting should satisfy most fans of either main character. The regular Amazing Spider-Man is in the middle of a big Doc Ock battle, and has its own A-list art team in Stuart Immonen and Wade von Grawbadger (who’ve also put in a lot of time with Bendis and the Ultimate Spidey cast); add in the Alex Ross covers, and this has been one of the better-looking versions of Marvel’s flagship title. Meanwhile, Venom, having reverted to its legacy numbering, has also flipped back to its character’s regular status quo, with Eddie Brock bonding with the alien symbiote again; the twist is that the reunion is killing it because of some blahblah change in Brock’s body 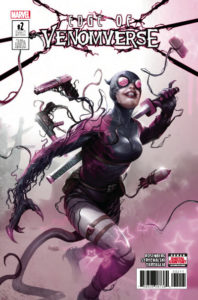 chemistry, but the real fun is the plot, involving Stegron (a human/dino blend much like the Lizard), Moon Girl and Devil Dinosaur. Edge of Venomverse seesm to be a takeoff on the Spider-Verse series of a couple of years back, with the Venom symbiote possessing a number of alternate-Marvel Earth characters who will, presumably, team up to save the multiverse… or destroy it.  This issue sees the Gwenpool character bonding with the costume; Hasting is her regular writer, and Irene Strychalski has a bright, simplified manga style that fits that book’s light comic tone, so it’s an effective episode that moves the larger story along, and showcases the charms of the Gwenpool comic for new readers. 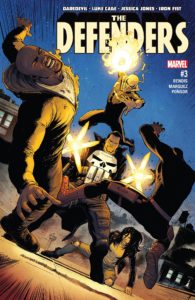 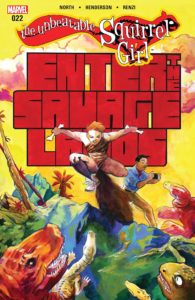 Defenders writer Bendis has been writing three of the four main characters here for decades, and offers a fast-paced, fun fight with Diamondback that plays off their easy familiarity with each other.  As with Sara Pichelli, he and Marquez have worked together before, and so know how to play to each others’ strengths; the last-scene cliffhanger fight here comes off particularly well, especially the tribute to a certain ’90s 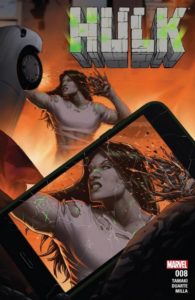 Batman comic (you’ll know it when you see it…). Unbeatable Squirrel Girl begins a new story, so try it: it’s smart and funny and doesn’t take itself too seriously, and still manages to get across a couple of important themes. Erica Henderson comes out of the bold, simple throwback school of artists like Darwyn Cooke and Chris Samnee (and stretching all the way back to Alex Toth); she does so much with small panels and design that it’s a revelation when she gets, say, a double-page splash of the Savage Land and just nails it. If

you gave up on the new She-Hulk comic (the one just called Hulk) because it seemed like its first arc was never going to end, issue #8 is a good place to get back on again: it’s early into its second story, faster-paced now that it doesn’t have to establish a bunch of backstory and with a clearer handle on its main character, too. Old Man Logan has its title version of Wolverine up against the family of green-trash hillbilly Hulks (led by a Maestro-like Bruce Banner) from his home dimension, crossed over to the main Marvel one. Come for that callback to the original Old Man Logan tale; stay for the the gorgeous Mike Deodato art: flip through a copy on the stands and see. 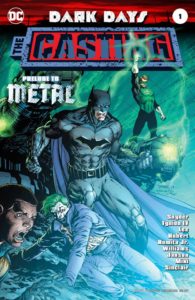 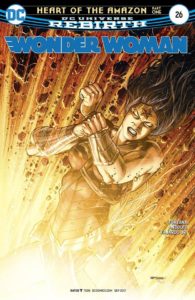 obsessive fans, involving everything from Hawkman and his nth metal (the driving conceit, so far) so Batman having stashed away the Joker in the Batcave, building on elements from Snyder’s New-52 run on the Caped Crusader and mysteries that span the DC multiverse and beyond. If you’re the kind of reader who just wants self-contained stories solely spotlighting each character you follow, then you won’t like this, but if you’re attracted to sprawling sagas with big casts, game-changing events and lots of Easter eggs for longtime readers, this is likely to deliver it well. Wonder Woman, following Greg Rucka’s swan song last issue, begins a new arc with a new creative team; wisely, it offers elements familiar to fans of the movie: Diana helping war-torn refugees, flashing back to her youth on Themyscira, attending a wedding reception with friend Etta 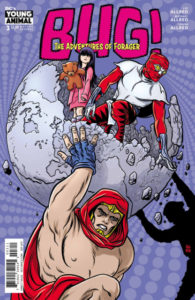 Candy, and ending on a very effective how-will-she-get-out-of-that cliffhanger — a  good beginning for a relatively-unknown creative team. Bug!, halfway through its run, continues to be an Allred family affair, with artist Michael following brother Lee’s script and wife Laura supplying the coloring; this issue continues to play with ’70s DC characters, specifically the Jack Kirby Atlas, who comes off as a barbarian with a combination of Conan’s physique and Groo’s brains. There’s tongue-in-cheek humor, action, New Gods mythology and a couple of plot twists, all illustrated in Allred’s precise psychedelic style; that’s enough to tie Bug! with Squirrel Girl as the most fun comic of the week. 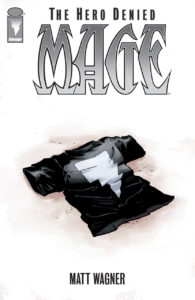 Of the indy debuts this week, the most-anticipated is Mage: The Hero Denied #0, heralding the conclusion of a trilogy that began over 30 years ago, and whose second volume concluded right at the end of the last century. Wagner’s perhaps best-known today for Grendel, but Mage always seemed his most 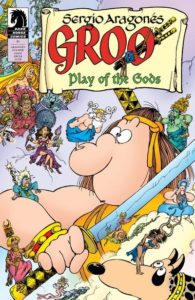 personal work, with hints of autobiography underneath all the fantasy elements. If you’ve read the previous adventures, you need no prodding from me to get this one; if not, check out this taste, and then get caught up on Kevin Matchstick’s story with the trade collections. You’ll find that it’s a whip-smart and engaging tale with memorable characters, lots of action and some deep themes — and then you’ll be ready to begin the finale next month like the rest of us.  Groo probably needs no introduction here, except to note that Sergio Aragones is a national treasure; he and co-writer Evanier always have a number of savvy points about human nature mixed in with the mendicant, mulch and cheese-dip jokes, and, if this mini-series’s plot about tyrants and hypocrites who use religion to bamboozle the gullible into following them seems familiar… well, that’s not an accident.  Not to worry, though — Groo is always a clever romp, and almost never preachy; you don’t have to get the political subtext, or care about it, to be hugely entertained.  Dread Gods might be a typical tale of the Greek pantheo, battling one another — except that it’s actually a virtual-reality show for the poor and disenfranchised of a dystopic near-future Earth, who experience it by plugging a cable into a socket in their necks. This first issue establishes both the “real” and the Olympian setting, and suggests that there might be some bleed-through between the two worlds,  an intriguing-enough premise to get me to stick around for another couple of issues. 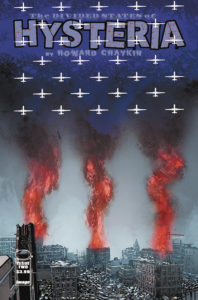 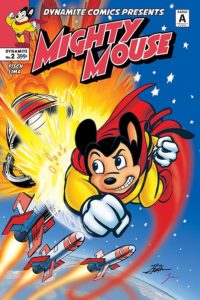 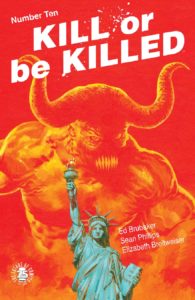 some negative publicity over its depiction of a transgender character, but it’s actually fairly standard for Chaykin: snarky, cynical, smart and not quite as transgressive as it thinks it is. The first two issues have mostly set up the main characters: a quartet of prison lifers who will end up being a Mission Impossible (or, maybe, a Dirty Dozen, minus eight) ops team trying to navigate the country’s chaos and help set things right; it’s definitely a Chaykin book, with many of his typical obsessions, but it’s also got the benefit of his decades of hard-earned storytelling experience, and it’s worth a look.  Mighty

Mouse had a first issue that was almost all set-up, getting the super-powered rodent into the real world; that done, this issue pays off nicely, as he tries to get back home, deal with the hazards of a world where his normally-benign cartoon violence can be deadly, and, with the help of his new young bullied-at-school acquaintance, figure out how to save the day in both universes. Writer Sholly Frisch does mostly what you’d expect, but does it well, and the Igor Lima art captures MM’s noble-but-slightly-goofy invincibility perfectly, creating a colorful, engrossing all-ages comic.  Kill or Be Killed concludes its second arc with some major questions about its demonic antagonist (like, 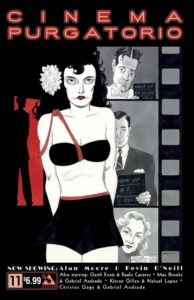 does he exist?) and continues to be just as much noir-y fun as all of Brubaker/Phillips’s collaborations. So too for the Remender/Craig team on Deadly Class, which focuses on its high-school-for-assassins supporting players this time around, stirring in revenge and romance subplots and generally getting us to care about people with a reasonably high chance of meeting a violent end soon. Cinema Purgatorio‘s title feature, by Alan Moore and Kevin O’Neill, has Marilyn Monroe singing/narrating an autobiographical musical (Moore being Moore, the lyrics actually scan), plus an episode of the Garth Ennis/Raulo Caceres Code Pru where 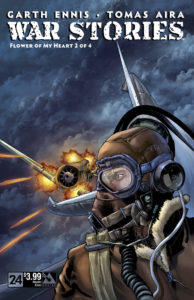 the title EMT tries to find out why so many of her cases have supernatural overtones, and there are hints of the wider story seen in her earliest comics; the other serials kind of tread water, but this is still the best source of cool-looking black-and-white horror art being published right now.  War Stories is Ennis again, doing a United Kingdom version of Harvey Kurtzman’s well-researched and wise battle tales; this week’s issue is part two of four, so if it looks interesting put it back, and pick up any four issues that form a complete story — or one of the trade collections — instead; you’ll get a better sense of its considerable pleasures.

With 40 years of experience in comic reading, collecting and reviewing, English Professor Phil Mateer has an encyclopedic mind for comics. Feel free to ask Phil about storylines, characters, artists or for that matter, any comic book trivia. He will post your questions and answers on the AABC blog. His knowledge is unparalleled! He is also our warehouse manager, so if you are looking for that hard to find comic book, ask Phil!
View all posts by Phil →
This entry was posted in New Comics, Reviews and tagged Bug, Cinema Purgatorio, Dark Days, Deadly Class, Defenders, Divided States of Hysteria, Dread Gods, Groo, Hulk, Kill or be Killed, Mage, Mighty Mouse, Old Man Logan, Spider-man, Squirrel Girl, Venom, War Stories, Wonder Woman. Bookmark the permalink.