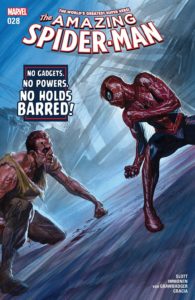 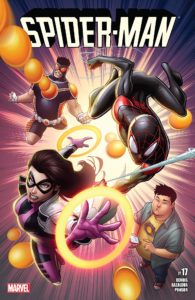 Three Spider-books this week: Amazing is a big Goblin/Spidey showdown, the finale to the latest arc.  Dan Slott’s quietly been putting together a consistently-high-quality run on this title for over six years now, and this is a good check-in issue, especially with the Immonen/Grawbadger art. Brian Michael Bendis has been writing some version of Spider-Man since Ultimate Spider-Man #1 in 2000, for over seventeen years. One common thread has been its sympathetic, perceptive and often 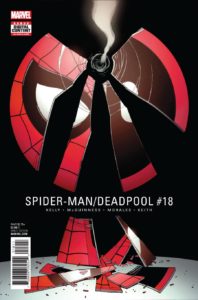 funny depiction of high-school kids; another has been the strong action scenes, like a couple here with the old-school gangster Hammerhead; Oscar Bazaldua seems to be having a lot of fun drawing these hard-boiled set pieces, , and it’s contagious. Meanwhile, Spider-Man/Deadpool ends its run, with Kelly and McGuinness having delivered a surprisingly-thoughtful and intense story mixed in with all the junior-high humor and bromance shtick;  given its sales, it’s no surprise that a second volume is on the way, but whoever gets the assignment will find it hard to top what the original Deadpool comic’s creative team delivered here. 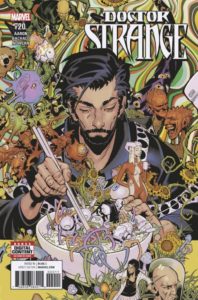 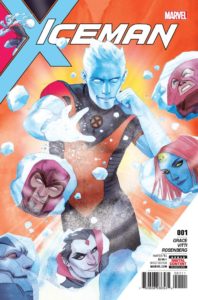 A conclusion, before a quartet of newer titles: Doctor Strange #20 is Aaron and Bachalo’s final issue. Why did issue #21, a Secret Empire tie-in by the new creative team, come out last week? Try not to think 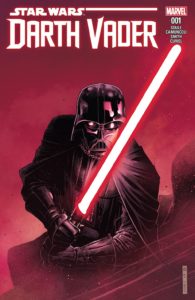 about it; instead, appreciate the way that Zelma, the librarian/assistant focus character, comes full circle here from her appearance in issue #1, and note how easily Bachalo, and Nowlan, are able to give the Doc’s weird world its own offbeat, fluid grace.  Iceman is a new series about the temperature-manipulating X-Man (the older, twenty-something one); it earns points because its brisk ticking off of Bobby’s character traits (he’s got parent issues; he just recently figured out he was gay; he’s reasonably centered, and happy-go-lucky by nature) and super- 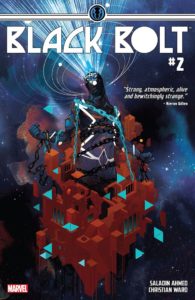 abilities gives it enough space to offer a complete story instead of just the first chapter of a graphic novel.  Darth Vader is a new volume starring that classic bad guy; it begins right after he wakes up in his now-iconic armor and finds out that his wife is dead, and if you’re a Star Wars fan you should like it just fine — especially when you add the ten-page bonus feature by Chris Eliopoulos, and its lighter look at Lord Vader’s efficient, but employee-resource-draining, responses to bad news. Black Bolt sees that title Inhuman trapped in a space prison with 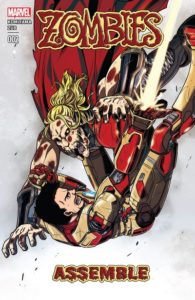 the Absorbing Man, a warrior Skrull woman and others.  It’s developing a twisty, appealing caper-movie quickness, and having him able to speak normally for once makes the exposition a lot smoother;  Christian Ward’s colorful, expressive art seals the deal. Finally, Zombies Assemble is the second chapter of a Japanese Avengers-battle-a-zombie-outbreak comic, presented in its original black-and-white, right-to-left style; its outsider’s perspective on the New York/American-based characters is interesting, and it’s told so smoothly and efficiently that its thirty pages of story just fly by. 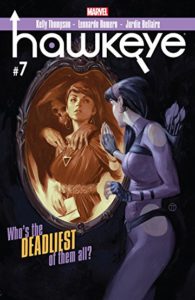 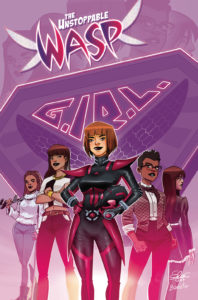 The rest of the Marvel ongoing titles this week — weighted, as usual, toward their YA/female-lead books — not because of the value of cultural or gender diversity, but because they have the best and most energetic storytelling right now. Hawkeye sees its LA PI title character getting an invitation from her nemesis, Madame Masque, and fighting through a bunch of bad guys (and flashbacks to her childhood with her 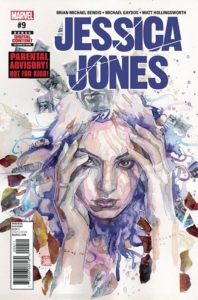 sketchy corporate-criminal father) to accept it, only to be surprised by a last-page reveal; it’s an effective look at Kate’s abilities and scrappiness, with a partial origin mixed in, and a good example of Thompson’s smart, well-constructed scripts and Romero’s modern-minimalist, good-looking art. The Unstoppable Wasp‘s Elsa Charretier uses a similar art style, while that book’s writer, Jeremy Whitley, adds girl-power through science and STEM-class training to the themes — making this a comic that should appeal to teachers, and do very well in the scholastic markets, if not with the Wednesday- 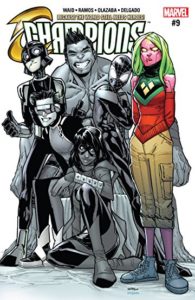 comics-shop crowds. Jessica Jones continues Bendis and Gaydos’s return to their now-famous heroine, thanks to Netflix, and, in the middle of an ongoing tale about Jessica working a case for Maria Hill, gives her a satisfying moment of redemption in her personal life that plays perfectly (this, and an earlier scene, where she has to deal with a random super-villianess while sitting on a toilet in prison — are both examples of why you need to be reading this book). That leaves two typically-high-quality Mark Waid-helmed titles: Champions focuses just on Viv, the Vision’s daughter, as she encounters a new heroine, the Red Locust, and they bond; its blend of 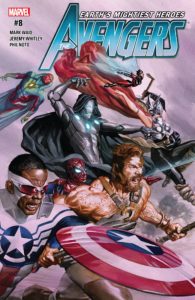 action, humor and characterization plays to Humberto Ramos’s strengths, and shows why he’s the ideal artist for this comic. Over in Avengers, Waid’s partnering with Phil Noto, and proves he’s a good writer by tailoring his script to that artist’s painterly, dramatic, dream-like style, as the team fights a powers-absorbing antagonist and we get to see a lot of both the new Wasp and the Victor von Doom version of Iron Man. It’s another good check-in issue, rich in plot and character and with an actual conclusion, and makes a good case for why this is the best of the Avengers titles right now. 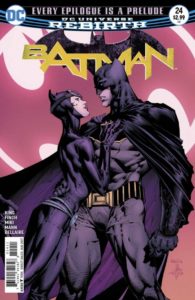 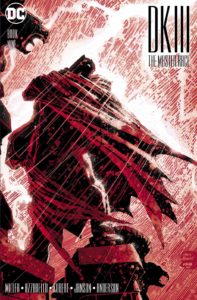 Batman #24’s gotten a lot of publicity for its last-page surprise — which I won’t spoil here, except to note that (a) it’s the kind of development that’s seldom permanent in the keep-the-IP-simple world of corporate comics, and (b) on the other hand, Superman’s married with a kid now, so major lifestyle changes for top characters are possible. The issue itself is a breather, tying up some loose ends from previous threads (involving Gotham Girl, especially) and getting 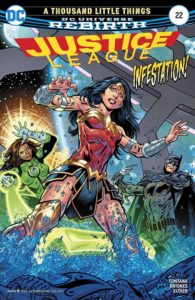 ready for a major Joker/Riddler arc; it’s also an example of how Tom King’s narrative, plotting and character strengths have kept this comic on top since the departure of former scribe Scott Snyder. DKIII concludes; it’s been a weaker story by far than the original — and lesser than the gonzo, more-tongue-in-cheek DKII, too; Brian Azzarello may or may not have a sense of humor, but it seldom appears in his comics scripts.  Still, the widescreen scope of the action, the chance to visit with these future versions of the characters again, and the little extra Frank Miller- 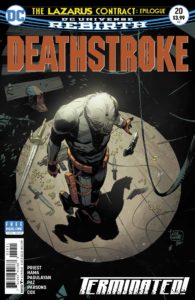 drawn inserts, all make it work.  Justice League‘s worth noting because it’s a done-in-one issue showcasing the various members of the current team — especially the two new Green Lanterns — as they fight a microscopic-alien infestation on the JLA satellite; if you haven’t checked in to DC’s main super-team in a while, this is a good place to do it. Deathstroke comes out of the “Lazarus Contract” crossover with a changed, redemption-seeking Slade Wilson.  As with Batman, it’s doubtful that game-changing character developments like these will stick, but Christopher Priest’s smart writing and sophisticated ideas guarantee a fascinating  journey. 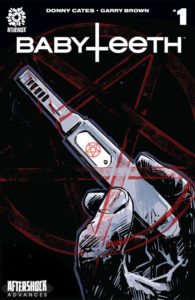 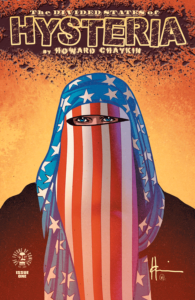 Of the five indy first issues this week, Baby Teeth gets the most attention, because its writer, Donny Gates, has had two hits already this year, with Redneck and God Country. It looks like an Omen-type demonic-baby tale with a teen-mom protagonist; that isn’t exactly new ground, but Redneck is about vampires, and Cates has been able to make that burned-out genre interesting, so we’ll see if his knack for characterization and solid plots carries over to this title, too. Divided States of Hysteria is new Howard Chaykin in American Flagg/political mode; he says in the editorial that he started this early last year, and thought it was the darkest thing he’d ever written, and then after the 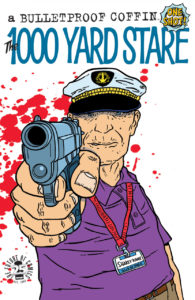 Presidential election wasn’t sure it was dark enough; the first issue is mostly character introduction, set-up and blood, with a classic lowballed sound effect in the last panel that ought to bring everyone back to try to figure out what’s going on next issue. The 1000 Yard Stare is a one-shot set in the Bulletproof Coffin universe, a meta place where funhouse-mirror versions of the comic’s writer, David Hine, and artist Shaky Kane are at a comic convention; Kane, in the comic, is a former Silver Age great who’s fallen on hard times, and we get his bitter, eventually-murderous struggles with the modern world interspersed with pages from his comics (Kane, 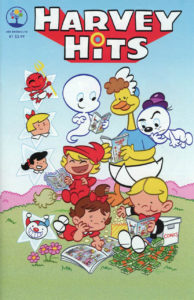 the real artist, has obvious Jack Kirby and psychedelic influences, which make the comics-inside-the-comic suitably garish and strange, and give the whole thing an offbeat energy). That leaves two books reviving classic kids’ comics — the first, Harvey Hits, is an anthology using a bunch of the Harvey characters (Richie Rich, Casper, Wendy, Hot Stuff, Baby Huey, etc.), and walks a tightrope between modern Adult Swim self-awareness and actual childlike innocence; Art Baltazar, who contributes the cover and short Little Dot and Baby Huey episodes, and Archie artist Dan Parent, who provides a longer Richie Rich tale, are probably the 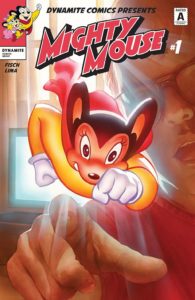 best known, while Kirstie Shepherd and Cesare Asaro handle Hot Stuff  and Wendy, and there’s a Casper story by Landry Q. Walker and Eric Jones that feels like it could have come from John Kricfalusi. Mighty Mouse takes a more realistic tack, at least at first, as a picked-on junior-high kid loses himself in after-school cartoons involving the super-rodent, and fills notebooks with drawings of him; this leads to a fantasy twist — but not until the very last panel, so we’ll have to give it a few more issues before it’s clear whether the combination of cartoon- and real-world elements will blend into a good story. 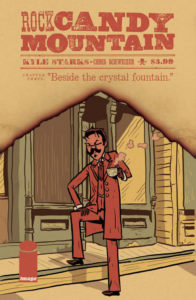 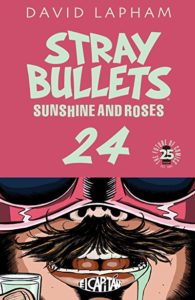 becoming a favorite, with its combination of cartoony, precise art, 100-years-ago setting, and detailed research (we get a discussion of the significant differences between hobos, tramps and yeggs in this installment, which counteracts that data with a crackling deal-with-the-devil  story, complete with editorial on the history 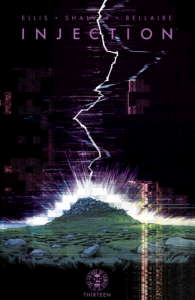 of Satan in folk literature). Stray Bullets offers its usual mix of guns, drinking and hard-boiled crime, as a trio of fugitives from a mob heist passes through New Orleans and ends up drawing a little too much attention to themselves. Injection is a mix of high technology and English-moors mysticism, as a Stonehenge-like structure with an underground sacrificial chamber demonstrates  why it’s bad to stick around when the fabric between worlds wears thin: Warren Ellis and Declan Shalvey make the book’s terrible events look wonderful.

With 40 years of experience in comic reading, collecting and reviewing, English Professor Phil Mateer has an encyclopedic mind for comics. Feel free to ask Phil about storylines, characters, artists or for that matter, any comic book trivia. He will post your questions and answers on the AABC blog. His knowledge is unparalleled! He is also our warehouse manager, so if you are looking for that hard to find comic book, ask Phil!
View all posts by Phil →
This entry was posted in New Comics, Reviews and tagged Avengers, Baby States, Batman, Black Bolt, Champions, Darth Vader, Deadpool, Deathstroke, Divided States of Hysteria, Doctor Strange, Harvey Hits, Hawkeye, Iceman, Injection, Jessica Jones, Justice League, Mighty Mouse, Rock Candy Moountain, Spider-man, Stray Bullets, Wasp, Zombies Assemble. Bookmark the permalink.