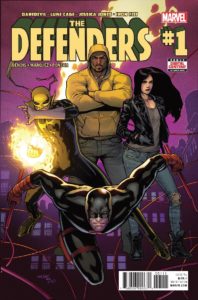 It was an unusually light week for Marvels, but an interesting one. First, there’s The Defenders #1, timed to debut with the Netflix series. Bendis, who created Jessica Jones (and her relationship with Luke Cage, which in the comics involves them married with a baby daughter), and knows something about TV show/comic synthesis,

provides a very reader-friendly script, combining the familiar comics versions of the characters (most of whose adventures he’s been writing since the dawn of the 21st century) with a resurrected Diamondback who’s straight out of the Luke Cage TV episodes. Marquez worked with Bendis on the Miles Morales Ultimate Spider-Man from 2012-2014, and their rapport produces easy-to-follow storytelling and action scenes, along with a couple of effective splash panels.  Secret Empire is mostly about both sides — Steve Rogers and his Hydra-ized Avengers, and the underground heroes led by an AI Tony Stark and Sam Wilson — chasing after a cosmic cube fragment held by a merged Ultron and Hank Pym, who captures both sides and subjects them to schizophrenic dinner conversation. This is actually a lot more entertaining than it sounds, thanks partly to  Leonil Frances Yu having been drawing tentpole mini-series 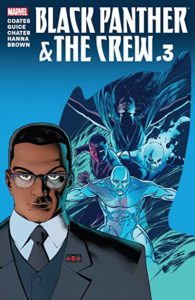 with dozens of characters since his Secret Invasion days, and being able to deliver the action scenes (not to mention a couple of dramatic plot revelations) with deceptively-simple flair. Black Panther and the Crew hasn’t received a lot of press, but it’s started to live up to its title, with much more T’Challa, along with Storm, Misty Knight and, on the last page, another character logically connected to the comic’s Harlem locale; Coates continues to show off his affection for these characters (especially in their late-20th-century incarnations), and Butch Guice’s realistic, detailed art could be the storyboard to a weirdlyly-cool late-night TV version of his tale. 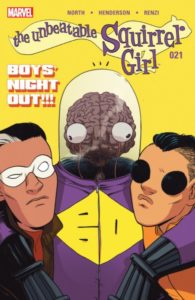 Of Marvel’s girl-power/YA titles, Squirrel Girl continues to be the standout, with its quick, clever scripts and  unpreachy-but-clear themes about how to

be a logical, decent person, mixed in with all the hijinx and derring-do and offhand humor; add Erica Henderson’s pure line and perfect composition, and it’s irresistible.  Ms. Marvel has a similarly-humanistic touch (its matter-of-fact presentation of the lives of Kamala and her American-Muslim friends and family does more to normalize them than a dozen speeches or rallies), but in a more traditional superhero setting; the rise of Hydra lets it make some passionate points about the fear of the unknown it’s trying to 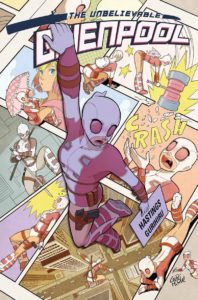 combat, translated into mutant roundups instead of  immigrant- or religious-themed ones. That leaves Gwenpool, unusual because, seventeen issues into its run, its protagonist has realized that, if she’s “in a comic book,” then she ought to be able to do things like step outside the panels. There’s a lot of fun, and imaginative art, in watching her work this out — especially when we realize that this ability could let her freeze time, step out of a narrative completely, access other stuff stored in other dimension, and generally up her power set to, say, meta-conscious Bugs Bunny levels.,This title is worth paying attention to. 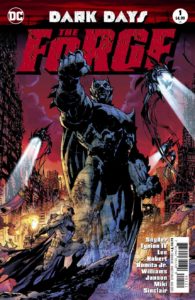 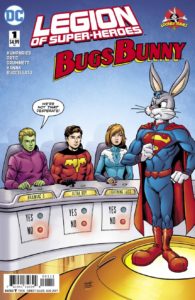 Dark Days: The Forge is the kickoff to DC’s late-summer/fall Batman-themed event by Scott Snyder.  It’s suitably widescreen, with its art triad of Jim Lee, John Romita Jr. and Andy Kubert moving from the Batcave to Superman’s Fortress of Solitude to Hawkman and nth metal to who knows what else; Snyder’s good at hinting at apocalyptic consequences and vast hidden mysteries, and the last-page splash will more than do its job of bringing readers back in a couple of months for the main story. Moving from the grim and insane to the merely Looney, we have two DC/Warner Brothers cartoon crossovers; the Legion of Super-Heroes/Bugs Bunny is the better one, with writer Humphries stirring in pitch-perfect versions of both Jim Shooter and Paul Levitz-era LSH soap opera along with knowing tributes to Bugs’s own canon and 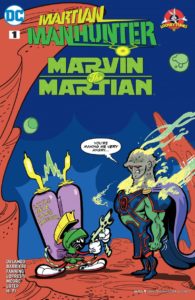 catch-phrases.  The Grummett/Hanna art team manages to handle both the superhero and the cartoonish characters equally well, making it easy to suspend our disbelief at the rabbit/teen hero combo; as a back-up story bonus, there’s an eight-page version of pretty much the same script, written and drawn by Juan Manuel Ortiz, but presented totally in the style of those old Looney Tunes comics. The Martian Manhunter/Marvin Martian mashup sounds inspired on paper, but less so in reality, because here the creative team tries to play it too straight and dramatic; it’s a J’onn J’onzz tale that, in attempting not to be silly, ends up being too boring and normal instead. Here, it’s the eight-page cartoony back-up story, by Jim Fanning and John 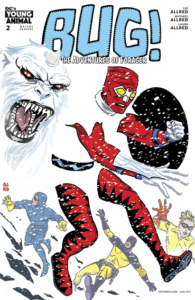 Loter, that captures the wackiness of the concept; it won me over with its perfect little tribute to “Duck Dodgers in the 24 1/2 Century,” and should have been the main event. That leaves Bug!, whose debut was a valentine to weird ’70s DC books; this second issue is more Golden Age, with a WWII tale involving the Losers, the GA versions of Blue Beetle, Sandman and Sandy, yetis, robots and the lost city of Nanda Parbat, all rendered in Michael Allred’s bright, go-go style; its lighthearted cheerfulness is just the right chaser to the gritty, looming dystopias found in Dark Days. 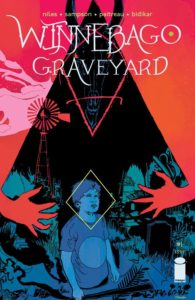 Winnebago Graveyard is a new mini-series from prolific horror-comic writer Steve Niles; it’s one of 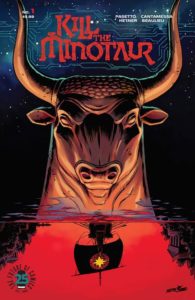 those typical-suburban-family-stumbles-onto-rural-satanic-cult tales, enlivened by the detailed, atmospheric art from Alison Sampson (Genesis, Mad Max: Fury Road). Kill the Minotaur is a retelling of the Greek legends of Theseus, Daedalus, the labyrinth on Crete and the title bull/man hybrid; much like Grant Morrison’s 18 Days, it updates the old myths and gives them a modern superhero sheen: purists may scoff, but the energy of the legends shines through, and their value as effective stories remains. Bitch Planet Triple Feature is an anthology, giving three sets of other creators license to play with the toybox created by Kelly Sue Deconnick and Valentine  De Landro. Cheryl Lynn 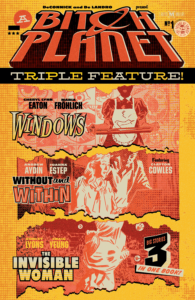 Eaton and Maria Frohlich contributed the first story, Andrew  Aydin and Joanna Estep the second, and Conley Lyons and Craig Young the third; all deal with a near-future Earth that’s become a corporate- and religious-run patriarchy, weeding out any females who are “offensive” or don’t follow orders, and shipping them off-world to the title prison. This set-up rings a lot of bells at the moment, and the book’s developed a decent-sized cult following, not the least because it’s a tale very well told; if you like it, you’ll like these additions to its canon, too. Jimmy’s Bastards is Garth Ennis and Russ Braun in full satirical mode, this time aiming at James Bond superspy movies, taking the lead’s behavior to its logical 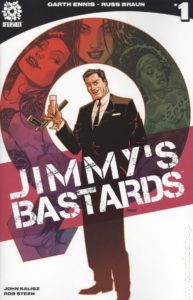 conclusions just as they did with superheroes in The Boys: he’s not a bad guy, and he’s ultra-competent at saving the world over and over, but he’s also been casually impregnating pretty much every woman he’s met for the last couple of decades, and the resultant babies have now grown into dozens of adults, all of whom want revenge, not so much for abandoning them as for never even bothering to know they exist. This is the Law of Unintended Consequences writ large, and looks like it should lead to quite a bit of bloody, slapstick, and very British fun. 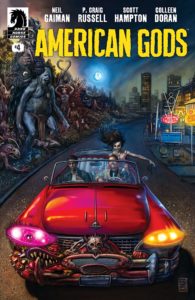 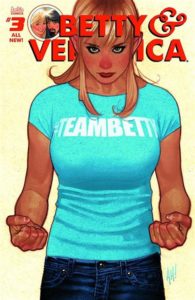 Of the ongoing indy titles, American Gods continues its very faithful adaptation of Neil Gaiman’s first best-selling fantasy novel, about a battle between the older, foreign gods brought to the US by its many immigrants, whose worship of them has waned and cost them power over the years, and a group of new modern-society 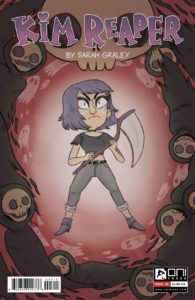 incarnations (gods of media, technology, etc.) who have risen to take their place. The Russell/Hampton art continues to impress — and, because the original novel devoted a lot of time to side stories of individual gods and other supernatural creatures and how they came to the States, the comic is lining up guest artists to tell their tales too; in this issue, Colleen Doran, whose mature, detailed and ethereal style was honed on this kind of fantasy, uses ten pages to tell the story of a Cornish woman who, forced to immigrate to the New World, inadvertently brings the pixies of her childhood over also. There’s a 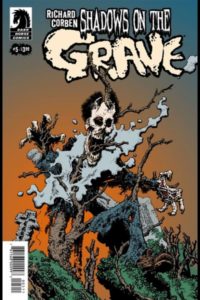 lot of talent involved in American Gods, from Gaiman on down, and it doesn’t disappoint.  Betty and Veronica #3 is (a) the conclusion of Adam Hughes’s mini-series, (b) very late, and (c) just as good-looking as you might expect. What you might not expect is Hughes’s talents as a writer: the plot, involving Mr. Lodge’s plans to buy out Pop Tate’s soda shop and turn it into a hipster, Starbucks-like coffee shop instead, pits the two BFFs against one another, leads Riverdale into a civil war, and has enough twists, turns and clever bits to keep everyone interested; since we 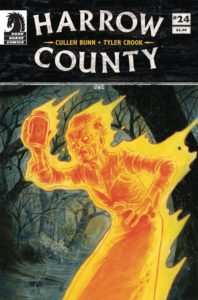 already know the art is good, that makes this a good buy. Kim Reaper is in the genre of cute Goth comics (it’s published by Oni, but wouldn’t be out of place with cartoony-supernatural-relationship Boom titles like Jonesy or Backstagers), with two college-age girls who are tentatively building a friendship (or maybe a romance…), except that one of them is an apprentice Grim Reaper, at first reaping the souls of animals and eventually graduating to adults. Despite its high-concspt focus on death, it’s lighthearted and offbeat, with matter-of-fact themes about responsibility and caring for others tucked in with the 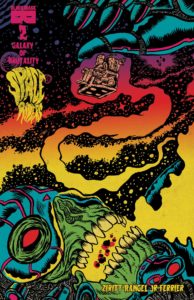 snarky humor, and gets its late-teen/early-twenties characters just about exactly right. Shadows on the Grave is Richard Corben’s airbrushed, EC-style horror, as well done and confident as you’d expect from someone who’s been working that field for fifty years. I haven’t mentioned Harrow County in a while, but its backwoods southern Gothic flair works particularly well in this week’s issue, a battle between the main character and one of her few friends. Cullen Bunn’s been doing a lot of mainstream superhero stuff, but this is his baby, and one look at Tyler Crook’s art (like the cover, over to the left there), ought to convince you to try it. Space Riders is psychedelically-colored, primitive-looking but rock-solid art that looks like Jack Kirby filtered through Paul Pope; I have no idea what’s going on, but it shore is pretty. 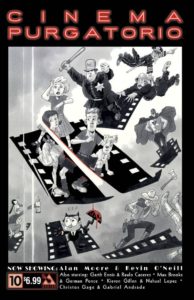 Cinema Purgatorio keeps building a narrative about a movie theater in the afterlife, showing sinister alternate-universe versions of actual American films as its second-person reader-viewpoint character starts to figure out just where she is. That’s just the front-of-the-book story; there are four others, all with some kind of horror connection, including Garth Ennis and Raulo Caceres’s midnight-shift EMT Code Pru, and the Max Brooks/Gabriel Andrade’s A More Perfect Union, wherein the North and South during the American Civil War reunite to fight an invasion of giant ants. At least three of these stories are guaranteed to be good — although readers might disagree about which three….

With 40 years of experience in comic reading, collecting and reviewing, English Professor Phil Mateer has an encyclopedic mind for comics. Feel free to ask Phil about storylines, characters, artists or for that matter, any comic book trivia. He will post your questions and answers on the AABC blog. His knowledge is unparalleled! He is also our warehouse manager, so if you are looking for that hard to find comic book, ask Phil!
View all posts by Phil →
This entry was posted in New Comics, Reviews and tagged American Gods, Bitch Planet, Black Panther, Bug, Bugs Bunny, Cinema Purgatorio, Dark Days, Defenders, Gwenpool, Harrow County, Jimmy's Bastards, Kill the Minotaur, Kim Reaper, Ms. Marvel, Richard Corben, Secret Empire, Space Riders, Squirrel Girl, Winnebago Graveyard. Bookmark the permalink.