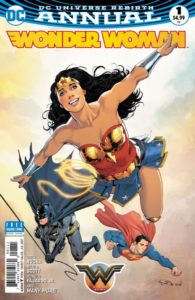 The Wonder Woman Annual (just in time for the movie!) leads with its best shot: the first meeting of 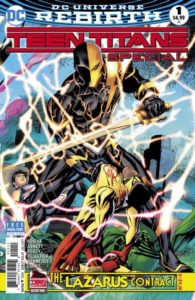 Batman, Superman and Wonder Woman, by Greg Rucka and Nicola Scott. In addition, there’s an encounter with King Shark, by Vita Ayala and Claire Roe; a Japan-set tale by Michael Moreci and Stephanie Hans; and a giant-monster story by Colin Kelly, Jackson Lanzing and David Lafuente: all four stories give Diana the combination of compassion, brains, strength and fighting ability that make her a heroine, and are accessible to new fans attracted by the movie, making this both a good comic book 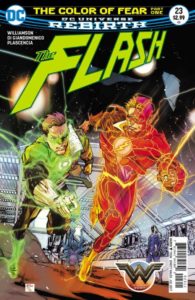 and a canny DC marketing move. Teen Titans Special is the fourth and final part of “The Lazarus Contract,” a crossover with the Deathstroke and Titans books that’s meant to reimagine Slade Wilson’s place in the DC universe; it finishes the story, but then provides three cliffhangers, one for each book, so readers will have to go back to the original comics to see what happens next, and fans of all three titles will want this, too. The Flash is worth noting because it’s the first part of a Hal Jordan/Green Lantern team-up with the Scarlet Speedster; those have been fun since ‘way back in the ’60s, and this one’s no exception, especially with di Giandomenico’s speedline-enfused art. 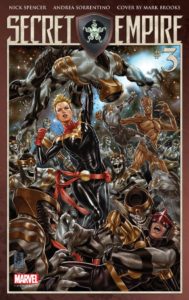 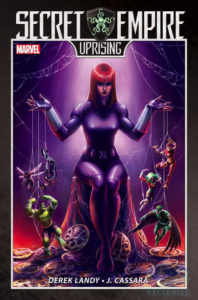 All of your Secret Empire shopping, in one place: Secret Empire #3 ends the first third of the story with its very videogamey spine in place: the few remaining good guys have to gather the scattered fragments of a 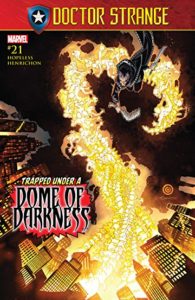 cosmic cube and hit “reset” before the cut-off outer-space heroes get wiped out or the resistance fighters get captured and executed. Spencer’s good at keeping five or six plot plates spinning, and Sorrentino and Reis have a painterly, color-drenched style that’s more expressionistic than you’d expect in a summer event book like this, and therefore works surprisingly well. Secret Empire: Uprising is the Black Widow training the teen Champions in infiltration and espionage — 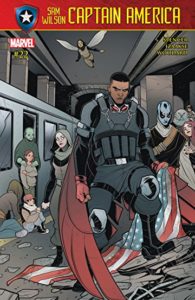 and, if necessary, worse; if you’re fan of those second-generation characters, this does OK by them.  Doctor Strange is Doc and crew in New York City trying to break out of the big dark-dimension globe Hydra trapped the whole town in (Dennis Hopeless, the new writer, brings in his former book’s heroine, Spider-Woman), while Captain America: Sam Wilson sees that character running an underground railroad into Canada for mutants, rebels and other undesirables fleeing the Hydra-run US.  Both books do their job of filling in parts of the main story — CA:SW especially, since its writer, Spencer, is responsible for the overall title, too. 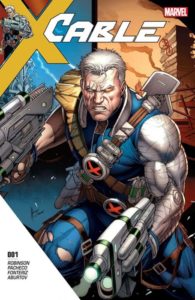 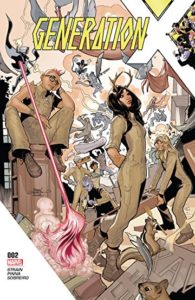 Cable relaunches under the guidance of James Robinson, who makes immediate use of the character’s time-travelling abilities to give us both a western and a samurai story; it’s a light, quick read, but an atmospheric one, and the visuals are suitable good-looking (artists love to draw westerns — look at Fiona Staples’s cover to Saga this week…). Generation X

resolves its first story in just two issues, enough time to introduce its New Mutants/New X-Men/Xavier Institute cast effectively, and if you’ve been a fan of the young-mutants-in-school trope before, this should interest you, too; the one complaint is that the Terry Dodson covers make the characters look so attractive that the inside art by Pinna, more angular and stylized, suffers by comparison. Hulk could have used some of Gen X‘s brevity: its first arc concludes after a full six issues, with Jen transforming only in this final installment — and, 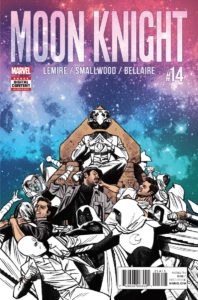 even then, not doing all that much. It’s not a bad psychological study, true to the character’s history and sympathetic to it, and the art’s got a cool modern-manga sleekness that works well, but I still argue that readers who buy a comic called, simply, Hulk are going to want a lot more smashing and general excitement if they’re going to stick around. Two Jeff Lemire-scripted series end their own arcs this week: Moon Knight finishes not only its story but its existence, with the 14-issue run all one novel, both an origin and a reimagining that’s been a smart, fast-moving 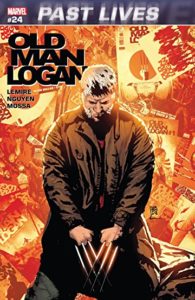 and unpredictable ride; it’s worth getting this final episode just to see how everything gets resolved. Old Man Logan finishes a time- and dimension-traveling tale by giving the ol’ Canucklehead some closure with his future/past — and, as with Moon Knight, a firm foundation moving forward. Lemire’s really good at the psychological underpinnings of his casts, and, especially when paired with decent artists, like Smallwood and Nguyen in these two books, has become one of the better mainstream-superhero creators over the last few years; these show why. 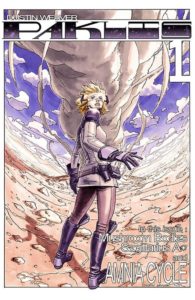 Paklis is a one-creator anthology, like Corey Lewis’s Sun Bakery, by Dustin Weaver; the first story, “Mushroom Bodies,” is an insect-phobic study in hallucination and paranoia, while the second, “Sagittarius Ax,” is a sideways-Sunday-strip, one-page- 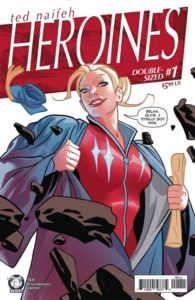 at-a-time space serial in the tradition of Flash Gordon or Star Hawks. The third offering, and the longest, is another space tale, “Amnia Cycle,” with a starship-pilot heroine; it’s drawn in an American style, but the plot and characterization have some manga influences, and it’s pretty good — in fact, all three stories have detailed, well-designed art, and at 52 pages for $5.99, it’s not a bad deal. Heroines is a new book by Ted Naifeh (Gloomcookies, Courtney Crumrin), and, unlike his previous goth/supernatural tales, is a straight-ahead superhero-universe tale about a woman with Dazzler-like flash powers who, basically, puts an 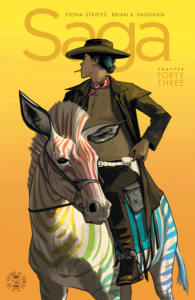 ad on Craigslist for other women to help form a super-group. Lots of world- and character-building in this first issue (which is a double-sized 48 pages for $6.99), and it’s a solid effort, one of those books that may or may not take off, but is worth a look. I mentioned the western-themed cover to Saga earlier, and there it is, over to the right.  This latest installment of Brian Vaughan and Fiona Staples’s sprawling sf take on actual star-crossed lovers is Image’s quarter comic this month — meaning that, if you’ve read all the critic and reader-based praise about it and never tried it, you now have no excuse (and it’s worth the quarter just for that cover…). 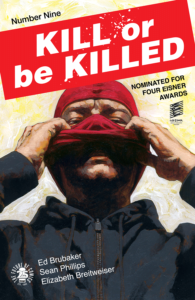 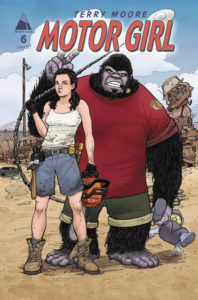 These last four books all involve established stories/creators, so there isn’t that much to say about them that hasn’t already been covered in earlier posts. Kill or Be Killed is Ed Brubaker/Sean Phillips hard-boiled crime fiction with 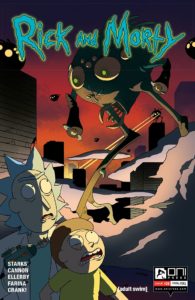 supernatural overtones (very faint ones, usually), a genre they’ve been killing (heh…) for two decades now.  Motor Girl is the most recent launch of the group, but Terry Moore’s already given us Strangers in Paradise, Echo and Rachel Rising, so I’m at the stage with him where I just shut up and buy whatever he does; in this issue, we get a wartime origin of sorts for the title character (or, at least, her imaginary gorilla sidekick), and it’s a good example of Moore’s powerful storytelling chops. Rick and 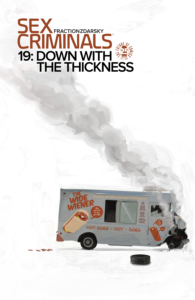 Morty, at 26 issues, is getting into heady longevity territory for a  cartoon adaptation, but its cynical/mean-spirited/hilarious/secret-heart-of-gold recipe, a good match for its source material,  helps to explain its continued success. Sex Criminals sticks around because of its high concept (when the title couple have an orgasm, it literally stops time for them), its surprisingly nuanced depiction of the comic’s cobweb of relationships, its break-the-fourth-wall humor, and Chip Zdarsky’s clear, perfect line and coloring.

With 40 years of experience in comic reading, collecting and reviewing, English Professor Phil Mateer has an encyclopedic mind for comics. Feel free to ask Phil about storylines, characters, artists or for that matter, any comic book trivia. He will post your questions and answers on the AABC blog. His knowledge is unparalleled! He is also our warehouse manager, so if you are looking for that hard to find comic book, ask Phil!
View all posts by Phil →
This entry was posted in New Comics, Reviews and tagged Cable, Captain America, Doctor Strange, Flash, Generation X, Heroines, Hulk, Kill or be Killed, Moon Knight, Motor Girl, Paklis, Rick and Morty, Saga, Secret Empire, Sex Criminals, Wolverine, Wonder Woman. Bookmark the permalink.