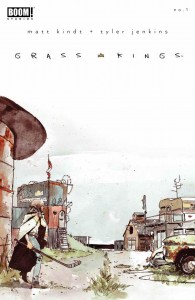 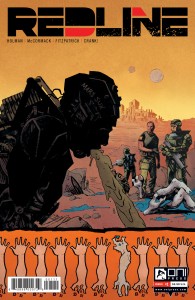 The indy books have the variety and quality to lead the pack this week. Grass Kings is the  star: Matt Kindt’s new tale about a ramshackle freehold of misfits claiming their own law over the county sheriff’s, run by a trio of brothers straight out of Shakespeare by way of the Coen brothers.  It’s illustrated by Tyler Jenkins (Peter Panzerfaust), whose watercolors make it both dreamlike and gritty, and it’s very well done. Interesting that this comes out a week after Jeff Lemire’s new Royal City; Kindt and Lemire are 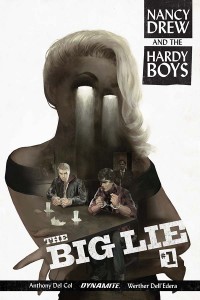 the Warren Ellis and Garth Ennis of the late ’10s, imaginative and in-touch creators at the top of their games. Redline is a science-fictional colonial-war take on recent wars in Afghanistan and Iraq, with the action transplanted to Mars; the dark-humored camaraderie of troops under constant stress feels drawn from real life, and any book that uses a line from “Bruised Orange” for its epigraph gets extra points from me. Nancy Drew and the Hardy Boys reads like a Frank Miller updating of those ancient, innocent properties: The Boys’ father, Detective Fenton Hardy, has died, presumably by suicide 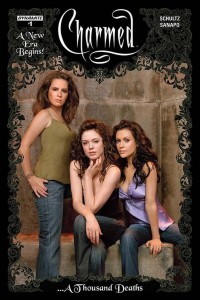 after being accused of corruption, and they’re the prime suspects. Get past the eye-rolling at the enforced grim-and-grittiness, and the last-page reveal that’s, you know, forecast by the title of the comic, and it’s actually OK, a noirish clear-our-names-and-find-the-real-killer setup with Dell’Adera doing kind of a Francisco Francavilla thing with the art. Charmed is a new comic launch for that sturdy TV series about three sisters who form a witch coven; it’s decent enough to be worth your time if you’re a fan of the show, but not so great that it’ll convince you if you aren’t (although the CW network having a reboot of the show in development might help the comic’s chances…). 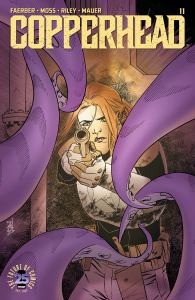 Two series return after some time off; Copperhead is a 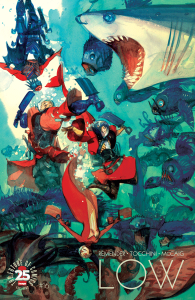 space western, and a pretty good one: a female lawman with a checkered past and a young son tries to be the law of a small town on a small planet on the galactic frontier, as various aliens stand in for the usual Indians, Mexicans and other genre characters. New regular artist Drew Moss is a little too clean-looking (the setting requires dust, grit and run-down buildings and people), but the characters are on-model, and regular writer Faeber has a confident command of his plot and relationships, so loyal readers should be pleased, and a few new ones might even get attracted. Low is set on an Earth where the sun has gotten hotter, and humanity has moved to the depths of the oceans; Remender’s up front that he’s writing a story about hope 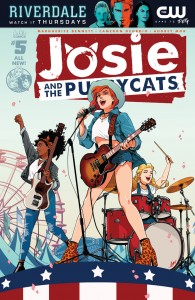 here, but to do that he first keeps piling the tragedy onto his main character; that can get depressing in the middle of the story (where we are now), but should eventually prove uplifting, and meanwhile we can appreciate the imaginative characters and places, and, especially, Greg Tocchini’s detailed, good-looking art. There are also two titles from the revived, rebooted Archie brand this week; Josie and the Pussycats is a smart girl-power comic, with sharply-drawn relationships, useful life lessons delivered with humor and style, and a rising-rock-band plot that should attract its YA audience and keep them hooked — if you like Jem and the Holograms, you’ll like this too. Reggie and Me is a mini-series (an antagonist character like Reggie only works in small doses; even Doctor 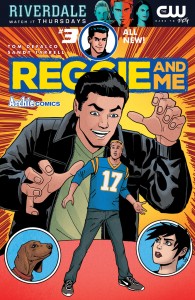 Doom’s never been able to sustain a solo book), and old pro Tom Defalco hits a lot of right notes, from making the point-of-view character Reggie’s dog to keeping the plot slice-of-life, instead of some elaborate Riverdale-changer. Artist Sandy Jarrell is good at walking the tightrope between the older, cartoonier Archie house style and the more realistic/dramatic modern one; my only complaint is that it’s all a little too realistic and serious, and could use more of the slapstick humor that should always lurk just offstage for Riverdale and its inhabitants — although, considering the tone of the TV series, that’s probably swimming against the tide right now…. 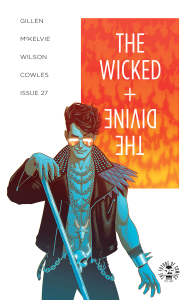 Of the other indy titles, The Wicked and the Divine sees the Gillen/McKelvie team over the halfway mark in their tale of young adults 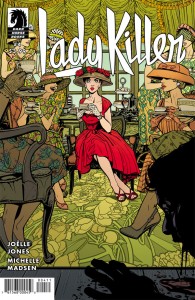 who become godlike rockstar avatars for a span of two years… and then die. Do they have to? That’s the increasing concern, as time advances inexorably, and the inevitable-death theme combines with the sharp, stylish action and art to make this percolate nicely. The same’s true for Lady Killer, where the mighty Joelle 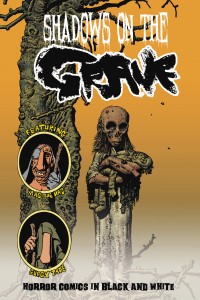 Jones’ art makes its story of a suburban ’60s housewife — who’s also a contract killer — equally beautiful and bloody, with enough unexpected twists and changing relationships (the mother-in-law, once a one-note busybody, is turning into a formidable, willing partner in retribution) to keep readers happy. Finally, Shadows on the Grave, Richard Corben’s new horror comic, is worth mentioning because anyone who’s been doing something really well for fifty years deserves a look: check that cover over to the left (as always, click on it to get a bigger image) and see if you agree. 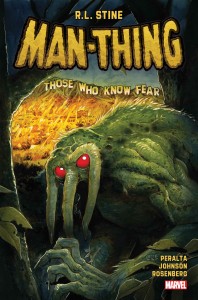 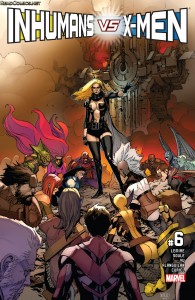 Only five Marvel books to note this week, and only one relaunch: Man-Thing. It’s written by kid-horror guru R.L. Stine, but the writing part is kind of offputting — Stine, as you might expect if you’ve read any of his Goosebumps books, tends to take a hearty, jovial approach to horror, and that jokey quality (i.e., when we open, Man-Thing has Ted Sallis’s brain and is working in Hollywood, worrying about his Q rating) might not work for all readers.  He also has a page where the art shows pursuing car headlights 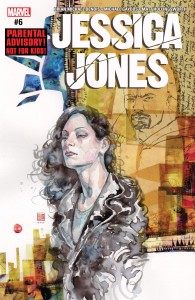 illuminating Ted’s windshield, and the caption reads “Their headlights send a blinding wash of light over Ted’s windshield.” Yes, we can see that…. However, the art, by German Peralta, is suitably shadowy, detailed and atmospheric, and there’s a four-page “Chamber of Chills” backup horror tale written by Stine that could have appeared comfortably in one of those pre-superhero monster books by Stan Lee, appropriately-grim twist ending and all; he might have been better off doing a whole book of those instead.  Meanwhile, Inhumans vs X-Men concludes with (big surprise) both groups  co-existing. This has been a decent showcase for both teams, although there are a couple of quibbles with it, too — as big a fan of Moon Girl as I am, 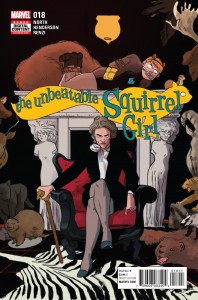 having the nine-year-old solve the problem neatly, when none of the genius grown-ups could, stretches even comic-book credulity, and fans of the Grant Morrison New X-Men run, and of Emma Frost particularly, won’t be very happy about the developments with that character here. However, this series did what it advertised, had consistently-good art by Leonil Francis Yu, and showed up on schedule: no small thing in today’s market. Jessica Jones features a conclusion, too, at least of its first arc, and it has fun playing with its morally-challenged, will-she-or-won’t-she heroine, and just the right combination of satisfying resolution and heartbreak to make us all wonder what happens next. Squirrel Girl is 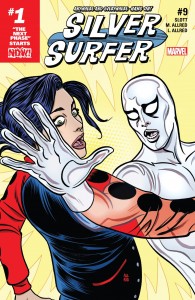 as dependably-entertaining as ever, with a formidable opponent for Doreen, a supporting cast that offers a lot of actual support, and the usual combination of snappy dialogue, funny asides, precisely-cartoony art and sensible conflict resolution that, somehow, usually ends up with someone getting punched anyway: miss it at your peril. Same for Silver Surfer, with its trippy Allred space art, its big-hearted interstellar romance, its weird-but-logical alien worlds, and its little hints of impending doom coming to ruin the idyll: this is going to get cancelled for low sales eventually, and then we’ll look at the trade collections and sigh, and wonder why we didn’t support it so we’d have more of them. 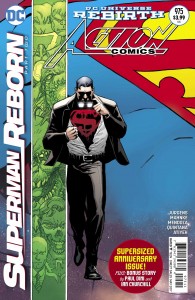 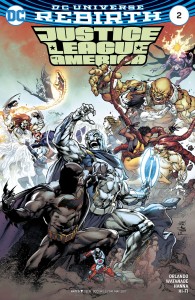 Action is part of an ongoing Superman-comic crossover (they’ll start putting the triangle numbers back on the covers any day now…), involving who the “other” Clark 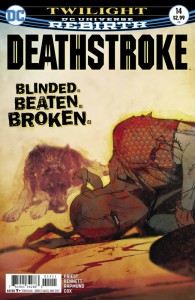 Kent is, and it turns out to be a logical suspect; Doug Mahnke, who’s been drawing the Man of Steel for decades, has a particularly good time with a series of splash pages “revealing” various candidates as the culprit: “It’s Lex Luthor! Oh, wait… It’s Doomsday! Oh, wait…,” and manages to make the final reveal both impressive and chilling. Justice League of America, early in its first arc, has Batman and crew against the Extremists; the Dark

Knight doesn’t hog the spotlight as much as you might think, and we get a lot of superhero small-group relationship dynamics to entertain us; so far, so good. Deathstroke continues to be readable (no easy task…); we should all pitch in and make sure Christopher Priest has at least one series to write for the rest of his life, especially one with quiet, super-competent artists like Bennett and Rapmund to bring his words to life. Astro City does a one-shot about sociopathy, age, redemption and the pleasures of inventive resourcefulness; we all take this book for granted, but my god, this is just a perfect, Chekhovian little tale,, and I can’t imagine anyone who’s read this far who wouldn’t like it.

With 40 years of experience in comic reading, collecting and reviewing, English Professor Phil Mateer has an encyclopedic mind for comics. Feel free to ask Phil about storylines, characters, artists or for that matter, any comic book trivia. He will post your questions and answers on the AABC blog. His knowledge is unparalleled! He is also our warehouse manager, so if you are looking for that hard to find comic book, ask Phil!
View all posts by Phil →
This entry was posted in New Comics, Reviews and tagged Astro City, Charmed, Copperhead, Deathstroke, Grass Kings, Hardy Boys, Inhumans vs X-Men, Jessica Jones, Josie and the Pussycats, Justice League, Lady Killer, Low, Man-Thing, Nancy Drew, Redline, Shadows on the Grave, Silver Surfer, Squirrel Girl, Superman, Wicked and the Divine. Bookmark the permalink.