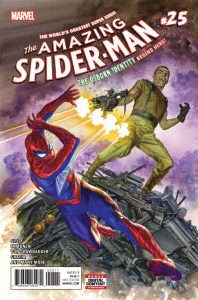 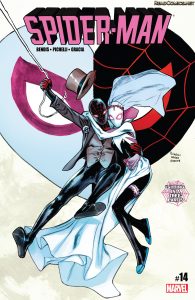 Only five Marvel books, six DCs, and fifteen indy books (including nine just from Image) on tap this week, but let’s start with the House of Ideas: Amazing Spider-Man #25 will set you back $9.99, but that’s not as outrageous as you might think; the lead story is a double-sized forty pages, and then there’s: an eight-page Spidey/Clash fight by Christos 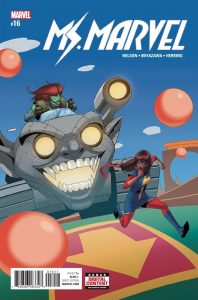 Gage, Todd Nauck and Rachelle Rosenberg; a six-page Spidey/Tsum Tsum tale (more than enough…) by Jacob Chabat, Ray-Anthony Height, Walden Wong and Jim Campbell; a five-page story involving Parker Industries losing even more money, by James Asmus, Tana Ford and Andres Mossa; eight pages on a still-a-teen Spider-Man bugging Aunt May about getting a dog, by Hannah Blumenreich, Jordan Gibson and Jordie Bellaire; a two-pager by Cale Atkinson, and a ten-page revived-Doc-Ock tale setting up the next regular-title arc after the Osborn one, by Dan Slott, Giuseppe Camuncoli, Cam Smith 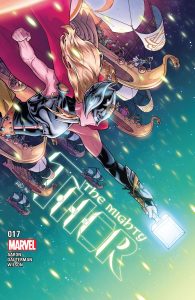 and Jason Keith. That’s 79 pages of story, almost four times what’s in a regular $3.99 issue, so you can do the math. The Miles Morales Spider-Man is regular-sized, although it’s part five of a six-part crossover with Spider-Gwen; those two characters make a logical team, and their shared heroism, great-power/great-responsibility ethos and mutual attraction continue to drive the story effectively. Ms. Marvel continues to show why it’s such a steady seller in the scholastic markets, with its smart, idealistic heroine, determinedly-diversity-friendly themes, and open, cartoony art.  Thor is more of a traditional superhero book about someone who just 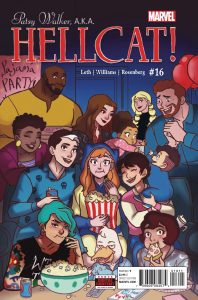 happens to be a woman, although that gender makes a difference in the current arc, where she’s battling the “gods” of the Sh’iar alien race, arrogant bullies who live for power, and defeating them through a combination of winning hearts and minds by looking out for the little guys, and being able to punch them in the face really hard if all else fails. Hellcat goes the other way, with another very cartoony, YA-friendly book about relationships and self-made hells and forgiving your friends; it’s only got another few issues to go, so catch it now, while it’s wrapping up its cast, subplots and life lessons with grace and humor. 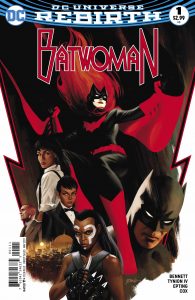 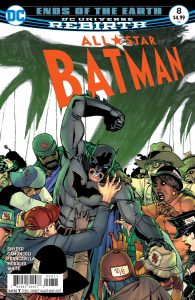 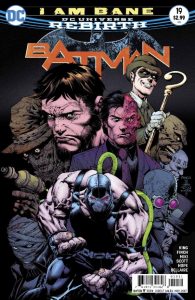 DC’s mainstream characters continue to carry the company: the bat-franchise launches Batwoman this week, with an international-intrigue story that’s very good-looking; after trying for years to duplicate J.H. Williams III’s art (which was so much a part of making the character popular in the first place), assigning it to Steve Epting instead is an inspired choice: he isn’t imitating anyone, but his design skills and extremely accomplished drafting style are comparable to Williams’s, and the splash pages and smaller panels 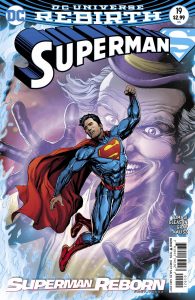 here are all wonderful to look at, detailed and evocative. All-Star Batman‘s second arc has seen some interesting narrative experiments by Snyder; here, the story is told almost entirely through Batman’s internal narrative, with a bunch of hallucinations and psychological games courtesy of the Mad Hatter. Giuseppe Camunicoli, who’s been one of the go-to Spider-Man artists for year, shows that he’s capable of handling the more-shadowy bat-verse too, and there’s the added bonus of the Francesco Francavilla back-up story (also written by Snyder), that has  Duke taking on The Riddler. Meanwhile, 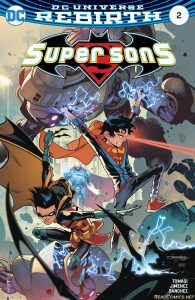 in the regular Batman title, we’re in the middle of a Bane/Batman throwdown; it’s leading up to the climactic fight next issue, so here Bane has to fight through all the Arkham inmates to get to his goal. This gives King a chance to do quick psychological takes on most of the bad guys, plus throw in a double-page Bat/Bane splash for David Finch at the end, to make sure everybody’s so impressed they come back for the finale. Over at the Superman titles, there’s a crossover going on to deal with the mystery of the “new” Clark Kent, and it turns out that the one behind that was Mr. Mxyzptlk (not much of a spoiler; looks at the cover to this week’s Superman up to the left there),

mad because he’d been captured by the even-m0re-mysterious Mr. Oz, and Big Blue never noticed, or came to find him. This is supposed to lead to answers about the new-52 Superman versus the current one, and the last-page splash here (leading into next week’s finale in Action Comics) suggests that’s exactly what’s going to happen;  if you’re a “Rebirth” fan, you’ll want to read this comic. We know nothing’s going to happen to the Kents’ son Jonathan, though, since he’s co-starring with Damian Wayne over in the new Super Sons, where the two frenemies have to deal with both Lex Luthor and Kid Amazo; Peter J. Tomasi, who writes both that and the regular Superman book, offers a strong 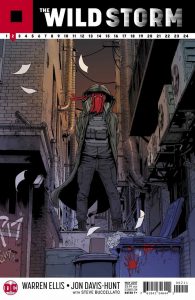 characterization of both kids, and the Jimenez art does an effective job of distinguishing their contrasting personalities through their visual representations. Away from the mainstream titles, Cave Carson ends on a big weird cliffhanger, one that suggests that the book’s full title (Cave Carson Has a Cybernetic Eye) might not necessarily be a permanent one; the Oeming art handles the surreal underground events, great big fights and possible tragedy with its usualy flair. Finally, The Wildstorm continues Warren Ellis’s attempt to make us care about all those Wildstorm characters — especially, so far, the WildC.A.T.S. — by rebuilding them from the ground up; lots of his usual high-tech speculation and shadowy conspiracy theories have kept it interesting, at least for the first two issues. 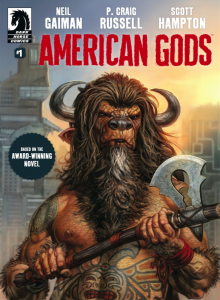 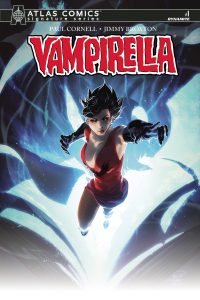 Of the indy first issues out this week, American Gods has the strongest pedigree, with a best-selling novel, an upcoming TV series and the pop-cultural charm of Neil Gaiman combining with the all-star art team of P. Craig Russell (words and layouts) and Scott Hampton to bring it to visual life. Vampirella starts a new incarnation involving her resurrection 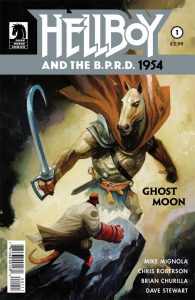 in a sterile, Clockwork Orange-like next-millenium future,  and she celebrates by getting a haircut and a costume change (no more looking like Jim Warren’s wet dreams circa 1960…), more than enough to keep readers around for at least the first couple of issues. Hellboy‘s story has ended in current continuity, but that doesn’t mean Mike Mignola and company can’t keep spinning tales of his past exploits, and the title of this new mini-series indicates exactly where in his career it’s occurring: no Mignola art, but Brian Churilla does 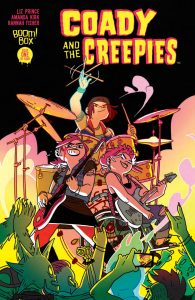 an OK job; his style’s a little like a young Jack Davis, appropriate enough for a tale set in 1954. Finally, Coady and the Creepies is a Boom! Box title that fits comfortably into the cartoony, YA- and diversity-friendly landscape of their other books like Lumberjanes, Backstagers and Goldie Vance (the cover, by sometime-Lumberjanes artist Kat Leyh, emphasizes the connection even more),  about a teen punk-rock group of triplet girls who survive a tragic auto accident (sort of…), and get involved in supernatural adventures during their travels; if you like the other Boom! books, you’ll like this too. 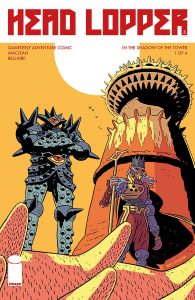 Tons of good indy titles this week (most of them by Image, flexing its creative muscles for its 25th anniversary this year), so let’s get to them: Head Lopper, Andrew Maclean’s gonzo version of Conan as filtered through European artists like Moebius, 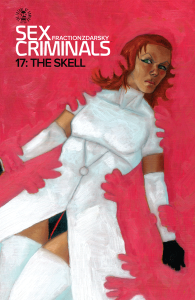 really has to be seen to be appreciated; pick it up, be impressed by its extremely high level of modern, cutting-edge craft, and then buy it. Casanova sees the return of Matt Fraction’s dimension-travelling rogue, although that title character doesn’t actually show up in this issue; instead, we get the backstory of a couple of other cast members, but it’s all so entertainingly told — and the Gabriel Ba art is so extra-good-looking (you could spend ten minutes 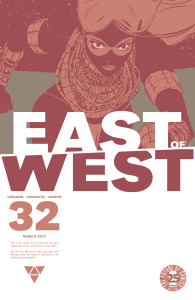 just looking at the quiet, elegiac first-page splash), that it doesn’t matter. Fraction’s also got a new Sex Criminals out this week; the plot in that book’s been moving slowly — and, as with Casanova, the lead characters barely appear — but after a couple of years of such consistently-high existence it’s earned its leisurely pace. East of West has been coming out even longer — it’s on issue #32 — and if you’ve drifted away from Jonathan Hickman’s alternate-timeline coming-apocalyptic vision of America, this is a good issue to 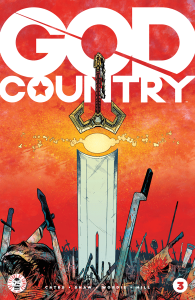 jump back on again, because the major players are gathering forces, President Chamberlain is on the move, and the story is  accelerating; even with all that, it’s clear enough for new or lapsed readers to appreciate what’s going on. God Country is a new book, but even just on its third issue it’s building a reputation as a high-concept tale (old guy with Alzheimer’s gets a magic sword that can conquer about anything, and as long as he’s holding it he’s OK again — but lots of dark forces in the universe are coming to take it back…) with unexpectedly-poignant characterization and roller-coaster-ride plot twists; get it now, because it’s really too good to wait for the first trade collection. 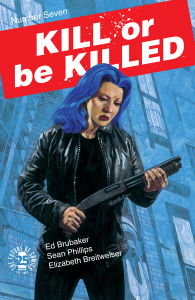 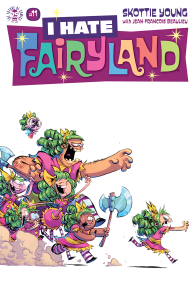 Over in Kill or Be Killed, Ed Brubaker pulls the same switch as Matt Fraction, with his main character not 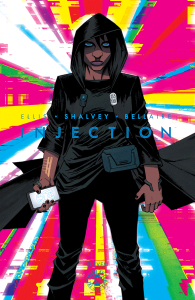 appearing at all in this issue (although we hear him…), as the spotlight shifts to his friend Kira, and provides both some of her own backstory and a different perspective on what’s going on with Dylan, and his (possibly) hell-sponsored quest to kill one bad person a month. I Hate Fairyland is one of those books you either like quite a bit, or don’t see the point of; if you like it, it’s back, and with some satire about conventions and obsessive fans to complement the regular chop-up- 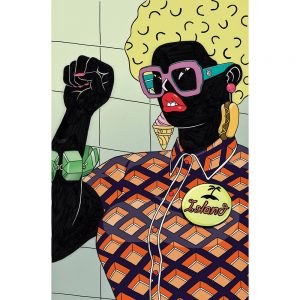 fairyland cartoony violence and hilarity. Injection is also back, after a long hiatus, with Warren Ellis and Declan Shalvey continuing their tale about a rogue AI that can mimic the supernatural; as with a lot of books this week, that part actually never comes up here, but watching Ellis’s off-center, matter-of-factly weird characters deal with newly-dead bodies chained to ancient, recently- 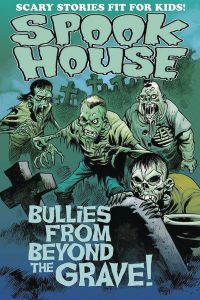 uncovered Stonehenge-like structures on the English moor is reward enough. Meanwhile, the anthology Island reaches, sadly, the end of its run — although fifteen issues of its cool modern sensibilities has been a gift.  Look at the contents of this issue: 29 pages of Grim Wilkins’s Miranda, a strikingly-beautiful, wordless quest tale with some breathtaking scenery; 42 pages of Faryl Dalrymple’s Pop Gun War, an ambitious novel by a major talent; a closing editorial by Brandon Graham; and, as dessert, a 25-page installment of Graham’s own Multiple Warheads. Give up Starbucks for two days and spend the $9.99 on this instead; it’s as good a rush as the caffeine.  Spook House is Eric (The Goon) 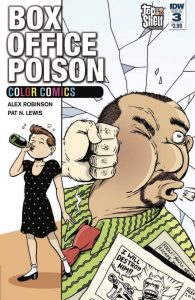 Powell’s PG-ish horror book for kids; it lets him indulge his EC-addict chops on slightly-above-Goosebumps level tales, some with his own art and some with similarly-inclined collaborators. Box Office Poison is reprinting Alex Robinson’s late-’90s black-and-white slice-of-life series in color, with commentary from Robinson about all the ’90s-indy-comics in-jokes tucked away in random panels; I remember it as being a compelling love story for the first dozen or so issues, and then trailing off — but that means we’ve got a year’s worth of good issues to look forward to; this one, where two of the principles meet cute, shows off its charms as well as any of them.

With 40 years of experience in comic reading, collecting and reviewing, English Professor Phil Mateer has an encyclopedic mind for comics. Feel free to ask Phil about storylines, characters, artists or for that matter, any comic book trivia. He will post your questions and answers on the AABC blog. His knowledge is unparalleled! He is also our warehouse manager, so if you are looking for that hard to find comic book, ask Phil!
View all posts by Phil →
This entry was posted in New Comics, Reviews and tagged American Gods, Batman, Batwoman, Box Office Poison, Casanova, Cave Carson, Coady and the Creepers, East of West, God Country, Head Lopper, Hellboy, Hellcat, I Hate Fairyland, Injection, Island, Kill or be Killed, Ms. Marvel, Sex Criminals, Spider-man, Spook House, Super Sons, Superman, Thor, Vampirella, Wildstorm. Bookmark the permalink.