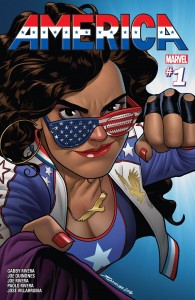 America is a love letter to the Kieron Gillen/Jamie 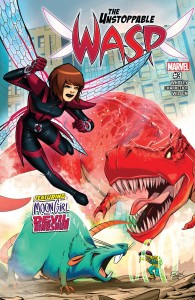 McKelvie Young Avengers, with its lead having come to prominence in that series, and a few of the members of that team showing up, too. It’s got some of the sass, the cutting-edge, clean-looking art, and the casual acceptance of diversity of that well-received series, too; with its take-no-prisoners queer-Latina heroine, it’s a deliberate thumb in the eye to the Age of Trump, its transgressive energy making it all the better. Just as America appropriates the attitude of Young Avengers, The Unstoppable Wasp does the same for titles like Squirrel Girl and Moon Girl and Devil Dinosaur (so 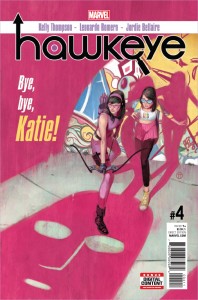 much so that Lunella and her big red friend play major supporting roles here), with its girl-power, science-is-cool themes and bright, confident optimism; this makes it, like those other titles, a welcome contrast to the grim-and-gritty world of so many other comics — a great introductory book for younger readers, presented with enough skill to not seem childish to older ones. Hawkeye covers much the same ground, but slants a bit older, with more punching and danger because of its Southern-California, private-detective setting; anyone who likes those other comics, though, should like it too, and the colorful, sharp art and no-nonsense modern heroine are just as appealing. 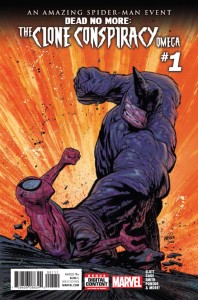 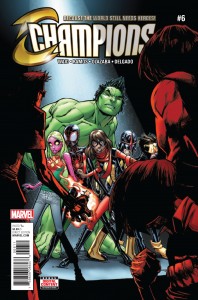 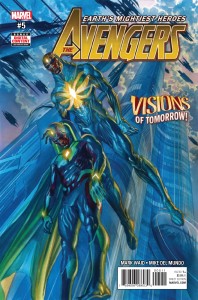 an epilogue with the Kingpin that sets up the next arc for the Spider-verse, with Norman Osborn; that nemesis hasn’t been seen since the end of Superior Spider-Man, so he’s overdue. Champions and Avengers showcase Mark Waid’s writing abilities; Champions, like America, gets in a couple of digs at the just-launched Trump Era, which was always antithetical to its Bernie Sanders-like populism, but its big attraction, as always, is both the interactions between its young, idealistic teen heroes and the Ramos art; he’s particularly good at younger characters, so he’s in his 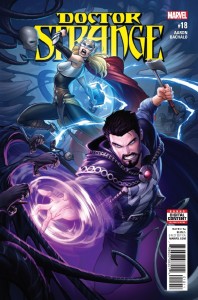 element here. Avengers follows the grown-up powers, and is a parallel story to last issue’s: that one focused on Kang, ending with an Avengers invasion, and this one shows how they time-traveled, rounded everyone up and got to that point;  presumably next issue will be the final big battle. Del Mundo’s ethereal, Day-Glo art is an attraction here, too, although readers drawn in by the ultra-realistic Alex Ross covers might get whiplash from the abrupt change in styles. Doctor Strange features a team-up with the Jane Foster Thor, as the Doctor needs, not a Thunder God, but a competent pair of surgical hands to counter 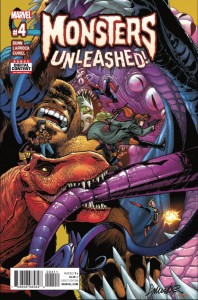 the latest ploy by his adversary Misery, who’s possessed Wong and caused the usual great deal of trouble. Here, too, the attraction’s the art, as penciller Chris Bachalo’s parade of astonished bystanders reacts to the weird supernatural events all around them, particularly the living brain tumors with eyeballs on tentacles. That leaves the Monsters Unleashed mini-series, whose penultimate issue puts all the pieces in place for a great big everybody-in-the-pool fight against the C’thulhu-like momma monster; I’ve been impressed with Salvador Larroca’s ability to draw what must be close to a hundred characters, between the various heroes, “good” monsters and bad ones, and it’s nice to see characters like the Miles Morales Spider-Man and Moon Girl and Devil Dinosaur get some screen time as important spurs to the action here. 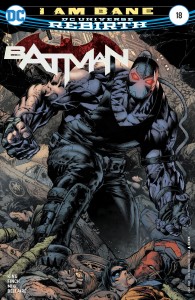 Savage Things is about kids who are identified as sociopaths, taken at a young age and trained to be assassins and terrorists; if you like highly-competent black-ops ultra-violent action, then here you go. Batman has the third part of a big Bane/Batman confrontation in Gotham City; King uses an effective parallel plot structure to show the similarities in the characters’ origins, and why they’re such implacable foes, and of course David Finch was born to draw the big fight 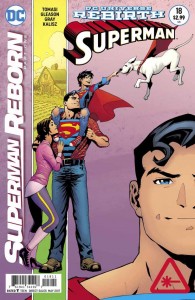 scenes here. Superman kicks off a big crossover with its sister title, Action, that’s meant to answer a number of questions about the “Rebirth” version of the Man of Steel: who that “extra” version of Clark Kent is, how the new-52 and current versions of Superman are related, what’s up with that “Mr. Oz” guy, and what exactly happened to the missing ten years of all the DC characters’ lives; that would be worth reading for DC fans even if this volume wasn’t a good story, 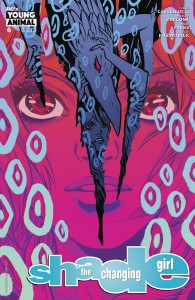 but fortunately it’s been hitting all the right narrative and character notes from the beginning, so buckle up and enjoy the ride. Shade the Changing Girl offers the conclusion to its own first arc, as Loma has to fight the ghost of the girl whose body she’s inhabiting; the resolution sets up the series nicely, with a solid supporting cast and a couple of menaces looming on the horizon for later — and a neat, subtle twist at the very end;  all the Young Animal titles have been decent, and this has been one of the best, calling back to the original ’90s Shade series while carving out its own adolescent/high school tone and themes. 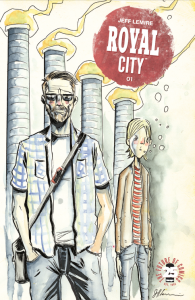 I figured Royal City, Jeff Lemire’s new ongoing series as both writer and artist, was going to be about a crime-ridden film-noir metropolis, but it was something very different: a 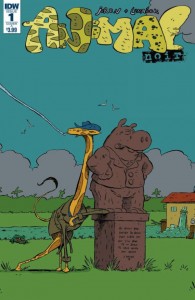 tale of a  family still dealing with a long-ago tragedy, with rich characterization, skillfully-interwoven lives and a literally haunting ending, one of those shocks that’s carefully prepared in the story itself, but so that readers don’t it see coming until near the end. Lemire mentions in the editorial material that he wanted to do something”real,” unlike his high-concept sf/fantasy titles like Descender or Sweet Tooth, and the result is an intriguing, human, very well-constructed story, one that fans of family dramas like This Is Us would probably find surprisingly appealing. Animal Noir, on the other hand, provides exactly the crime-ridden big city, mobsters and 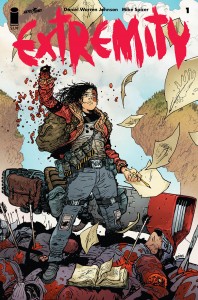 private detectives of film noir, except that — as the title proclaims — it’s done with anthropomorphic animals: Zootopia by way of Chinatown. Cool European art (that first-page splash looks like a George Herriman tribute), with an appealing mixture of the shady and the cartoony, plus a deep backstory, make this an unusual but highly entertaining debut. Extremity isn’t quite as original — it’s one of those post-apocalyptic tribal-faction action thrillers — but its revenge-story plot and complicated family relationships, plus energetic and violent art that revels in the action scenes but manages to communicate the quiet emotional moments well, too, make it worth a look. 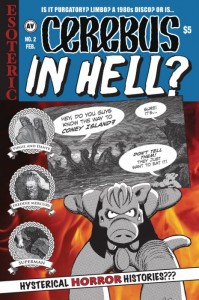 Cerebus In Hell? #2 is pretty much exactly like #1: pictures of the aardvark photoshopped into scenes of Gustave Dore’s version of Hell from Dante’s Inferno, all in the 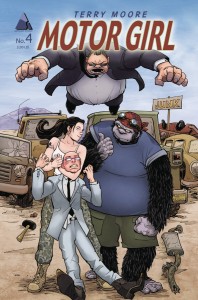 service of a series of four-panel gags. For Cerebus fans only — but, if you’re one, it’s more than oddly entertaining enough to be worth it. Motor Girl continues Terry Moore’s latest, about a damaged Iraqi-war vet who runs a junkyard, speaks to an imaginary gorilla friend, and deals with apparently-real little green aliens and terrestrial thugs who want to chase her out of the junkyard so they can buy it and find the aliens. That seems like a lot, but Moore’s been doing this a long time, and it’s as good a combination of action, humor and poignant character development as you’ll find anywhere. Cinema Purgatorio is another installment of Alan Moore’s 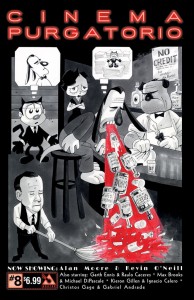 anthology (after a long hiatus) with an impressive lineup of creators: first, Moore and longtime artist/collaborator Kevin O’Neill offer another of the title films, a cartoon with Pat Sullivan and Otto Mesmer — who created all those vintage Felix the Cat cartoons — as a cat-and-dog odd couple, interweaving tragic bits of their real lives (real-life Sullivan was a triple threat: an alcoholic, a pedophile and a racist) with their animated counterparts; it’s like Betty Boop in The Lost Weekend as written by Jean-Paul Sartre. The other features, all returning chapters of serials, are by the usual all-star cast: Garth Ennis and Raulo Caceres on Code 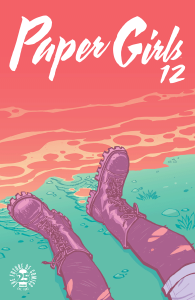 Pru, about an EMT who keeps encountering the supernatural; Kieron Gillen and Nahuel Lopez in Modded, a what-if-Pokemon-were-demons mashup; Max Brooks and Gabriel Andrade on A More Perfect Union, about the North and South uniting during the Civil War to fight an invasion of giant ants; and Christos Gage and Gabriel Andrade’s The Vast, a giant-monsters-vs.-the-military tale. If a brainy black-and-white horror anthology sounds like fun, get this comic. Paper Girls was delivering Spielbergian/Goonies style ’80s suburban adventure well before Stranger Things (although at this point they’re far afield of the suburbs, stranded in prehistory…); as with Vaughan’s and Fiona Staples’s Saga, it’s best to just trust in the ride, admire the art, and appreciate the skill.

With 40 years of experience in comic reading, collecting and reviewing, English Professor Phil Mateer has an encyclopedic mind for comics. Feel free to ask Phil about storylines, characters, artists or for that matter, any comic book trivia. He will post your questions and answers on the AABC blog. His knowledge is unparalleled! He is also our warehouse manager, so if you are looking for that hard to find comic book, ask Phil!
View all posts by Phil →
This entry was posted in New Comics, Reviews and tagged America, Animal Noir, Avengers, Batman, Cerebus, Champions, Cinema Purgatorio, Doctor Strange, Extremity, Hawkeye, Monsters Unleashed, Motor Girl, Paper Girls, Royal City, Savage Things, Shade, Spider-man, Superman, Wasp. Bookmark the permalink.